Ischemic stroke (IS) is a cardiovascular disease that seriously threatens the health of middle-aged and elderly people. In China, due to its high morbidity, high disability rate, high mortality, and high recurrence rate, IS has surpassed the morbidity of heart disease and tumors [1], which brings tremendous economic pressure and health burden to the family and the society [2–4]. Multiple factors including smoking, hypertension, diabetes, hyperlipidemia, and high homocysteine content are risk factors for IS [5]. However, these risk factors can only explain a small part of the etiology. IS is a complex disease induced by the combined action of a variety of genetic and environmental factors, and genetic mutations play a crucial role in its development [6–8]. Nevertheless, the exact molecular mechanism underlying the development of IS has not yet been determined.

MicroRNAs (miRNAs) are endogenous noncoding small-molecule RNAs mainly composed of 19–25 nucleotides in eucaryon. Through complementary binding with 3′ untranslated regions in the target gene of mRNA, miRNAs can post-transcriptionally regulate the gene expression. Several studies have shown that miRNAs are involved in a series of important life processes, including cell proliferation, development, differentiation, apoptosis, and metabolism [9, 10]. Genetic mutations existing in miRNA sequences affect the expression of mature miRNAs, thereby influencing the expression of target genes. Moreover, studies have shown that miRNAs are closely associated with growth/development, differentiation, maturation, and lesion of the nervous systems [11].

Single nucleotide polymorphism (SNP) is one of the most common types of genetic variation. SNP that exists in the precursor miRNAs (pre-miRNAs) can affect the mature expression of miRNAs, and then change multiple biological functions mediated by the target genes. Currently, many studies have shown that SNP loci that exist in the four precursor miRNAs, including miR-146aC>G (rs2910164), miR-149T>C (rs2292832),miR-196a2T>C(rs11614913), and miR-499A>G (rs3746444), are closely associated with various diseases that are seriously harmful to human health, such as tumors, hypertension, cardiovascular disease, and diabetes [12–15]. Recently,the miR-146aC>G, miR-149T>C, miR-196a2T>C, and miR-499A>G alleles are possible genetic predisposing factors [16–20]. These 4 miRNAs can affect vascular damage responses [21–24]. Moreover, The miR-146a, miR-149, miR-196a2, and miR-499 alleles are closely associated with regulation of tumor necrosis factor-α(TNF-α) [21], methylenetetrahydrofolate reductasefour [22], and C-reactive protein (CRP) [24], These miRNA targets are related to thrombosis or inflammation pathways in the circulation system. So far, the correlation of genetic polymorphisms of miR-146aC>G, miR-149T>C, miR-196a2T>C, and miR-499A>G in the population Guangxi in China has not been reported both at domestic and foreign. Therefore, this study aimed to investigate the correlation of IS and SNP of the four miRNAs in the population of Guangxi.

The study population comprised 298 patients with IS and 303 controls. All the population were recruited from the department of neurology, Affiliated Hospital of Youjiang Medical University for Nationalities, Guangxi, China between January 2015 and June 2015. All of them had the first-time IS. The study was approved by the Ethics Committee of You Jiang Medical College and conformed to the guidelines set forth by the Declaration of Helsinki. The diagnosis met the criteria approved at the Fourth National Cerebrovascular Disease Conference in 1995. The patients were diagnosed by at least two experienced clinical neurologists through brain computed tomography (CT) and (or) magnetic resonance imaging (MRI). Patients with IS caused by cardiovascular malformations or tumors, trauma, blood diseases, drugs, and infectious diseases were excluded. The exclusion criteria of the population in the control group were the same as that in the IS group. The patients had no history of stroke or severe genetic diseases in the family.

Extraction of genomic DNA: EDTA-K2-mediated anti-coagulated venous blood (3mL) was obtained from people who received physical examination. A whole-blood DNA extraction kit (Shenzhen Yaneng Bioscience Co., Ltd., China) was used to extract the genomic DNA of whole blood according to the manufacturer instruction. The extracted DNA was stored at –70°C.

The measurement of serum homocysteine (Hcy) and blood lipid level

SPSS13.0 (SPSS, Inc., IL, USA) was used to conduct statistical analysis. Allele and genotype frequencies of the IS and control groups used the χ2 or Fisher’s exact test. Measurement data were represented by x ± s, and categorical data were represented by χ2. OR value and 95% confidence intervals were used to evaluate the correlation of each allele and genotype distribution frequencies. Multivariate logistic regression was used to evaluate the relationship between the risk factors (gender, age, smoking situation, diabetes, hypertension, and Hcy) and the disease. χ2 was used to evaluate whether the allele and genotype in the control group met the conditions of Hardy–Weinberg equilibrium. All the tests were bilateral detections, and P < 0.05 was considered to be statistically significant.

Clinical data of the enrolled population

Table 2: Comparison of basic clinical data between the IS and control groups

Comparison of blood lipid, Lp(a), and Hcy in each genotype locus in the IS group

No statistical difference in blood lipid, lipoprotein (a), and Hcy was observed in each genotype of miR-146aC>G, miR-149T>C, miR-196a2T>C, and miR-499A>G in the IS group (P > 0.05, Table 3 Comparison of relative expression levels of miR-499 and C-reactive protein(CRP) in patients with IS harboring different alleles

Table 3: Comparison of the levels of blood lipid, Lp(a), and Hcy of each genotype in the IS group

Table 4: Comparison of genotype distribution frequencies of the allele and genotypes of polymorphic loci in the IS and control groups 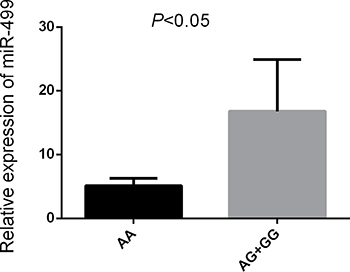 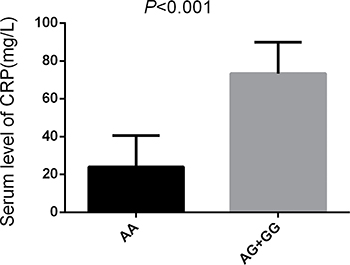 As the major type of stroke, IS refers to cerebral necrosis caused by stenosis or occlusion of the cerebral artery, and cerebral insufficiency, which is a complex neurological disease induced by interaction of genes with the environment that causes permanently disabling disease [6, 25–26]. One in six people in the world suffer from stroke [27], and IS seriously increases the burden on economy and medical resource in the world [28]. However, traditional diagnosis relies on CT or MRI, which cannot completely diagnose all types of strokes. Satisfactory clinical results cannot be obtained especially regarding the risk factors for IS. The role of genetic factors is increasingly evident in the state of the disease, especially in stroke [29]. MiRNAs are small-molecule RNAs recently found to be involved in the physiological and pathological processes of various diseases, including tumors [30], functions of immune system [31], cell proliferation [9], cardiovascular diseases [13], and nervous system diseases [32]. MiRNAs have a high degree of stability, tissue specificity, specificity of cell expression, and easy detectability in the human circulation. Therefore, miRNAs have become a molecular marker for the clinical diagnosis in many diseases, especially for early damage of the nervous system, cardiovascular diseases, and early painless diagnosis of IS [25, 33].

MiRNAs can regulate about 30% human gene expression [34]. SNP existing in pre-miRNAs or genetic mutations can affect the expression of mature miRNAs or cause mutative expression [35]. SNP existing in miRNAs are closely related to traditional risk factors for IS, such as atherosclerosis, hypertension, hyperlipidemia (high cholesterol), and diabetes [36–39]. Based on preliminary studies, four miRNAs were selected [miR-146aC>G (rs2910164), miR-149T>C (rs2292832), miR-196a2T>C (rs11614913), and miR-499A>G (rs3746444] to investigate the genetic susceptibility of SNP and IS in the population of Southwest region of Guangxi in China. It was found that miR-499A>G (rs3746444) was correlated with IS in the population Southwest region of Guangxi in China (P < 0.05). The risk of stroke would increase in people with G allele (OR = 1.455; 95% CI = 0.531–2.381) and AG genotype (OR = 1.339; 95% CI = 1.126–1.967; P = 0.037). We found that carrying the rs3746444AG/GG genetype had a higer level expression of miR-499,These findings were similar to the findings of the study by Liu et al. [40] that genetic polymorphism of miR-499A>G (rs3746444) might increase the risk of stroke in the Sichuan Han population. The rs3746444 A/G polymorphism association with ischemic stroke risk might be involved in thrombosis and/or inflammation pathways in the circulation system. The changes in pre-miR-499A: U or G: U base pairing would affect the expression of the target genes of mature miR-499 and biological functions [41, 42], cell hypoxia, or apoptosis caused by overexpression of miR-499 [43], and all these can increase the risk of stroke. The study found that carrying the rs3746444 AA had a lower level of serum CRP compared to those rs3746444AG/GG, miR-499 would increase the concentration of serum or plasma C-reactive protein, causing increased risk factors for stroke, such as inflammation, hypertension, and hyperlipoidemia. In summary, the pathological process of miR-499 in stroke and its potential mechanism are still unclear, but the mechanism that can increase the incidence of stroke through regulating the level of traditional risk factors for IS has been recognized. It is of immense significance in searching new diagnostic markers of stroke through in-depth study of the relationship between genome-wide associative analysis and stroke.

Ischemic stroke is a complex disease caused by a variety of factors. It can be caused by the interaction among multiple genes or by the interaction between genes, regions, and ethnic groups. Certain limitations of this study were as follows: (1) the subjects of the study were limited to the population of Guangxi in China, and the sample size was small. Thus, studies with varied ethnic groups and regions and large sample size are needed. (2) Selective bias was possible, and significant differences in clinical data between the IS and control groups were found. In addition, potential risk factors for stroke existed in people in the control group. (3) The pathological mechanism underlying the genetic polymorphism of miR-499A>G and ischemic stroke was still unclear. All genetic mutations in miR-499 and other factors might cause stroke, which had an impact on the explanation of the results of this study.

In conclusion, this study suggested that the genetic polymorphism of miR-499A>G was associated with IS in the population of Southwest region of Guangxi in China, and G allele and AG genotype of miR-499 (rs3746444) could increase the risk of IS. The molecular mechanism underlying the pathogenesis of IS and the genetic polymorphism of miR-499A>G in different ethnic groups need further exploration.

The authors declared that they have no competing financial interests.

This study was supported by the National Natural Science Foundation (No. 81260234).