Hepatocellular carcinoma (HCC) ranks the sixth most common cancer and the third cause of cancer-related mortality worldwide. Recent studies identified that circ-ITCH Suppresses mutiple cancers proliferation via inhibiting the Wnt/beta-Catenin pathway. In current study, conducted a genetic association study together with epidemiological follow-up study to delineate the role of circ-ITCH in the development and progression of HCC. we found rs10485505 (adjusted OR =1.18; 95% CI=1.06-1.31; P value =3.1×10-3) and rs4911154 (adjusted OR =1.27; 95% CI=1.14-1.43; P value =3.7×10-5) were significantly associated with increased HCC risk. The expression level of circ-ITCH was significantly lower in HCC tissues, compared with that in adjacent tissues (P value < 0.001). Cox regression analysis indicated that high expression of circ-ITCH was associated with favorable survival of HCC (HR=0.45; 95% CI=0.29-0.68; P value < 0.001). These results indicate that circ-ITCH may have an inhibitory effect on HCC, and could serve as susceptibility and prognostic biomarkers for HCC patients.

Hepatocellular carcinoma (HCC) ranks the sixth most common cancer and the third cause of cancer-related mortality worldwide [1, 2]. In Asia and sub-Saharan Africa areas, over 5% of the populations suffered chronically infected chronic hepatitis B virus (HBV) infection, which could reflect the elevated prevalence of HCC [1, 3–5]. In china, the estimated new cases and deaths for HCC were 466.1 and 422.1 thousands, respectively [6]. While the data for the estimated new cases and deaths for HCC in USA was 39,230 and 27,170, respectively [7]. Although many potential risk factors have been explored for their associations with susceptibility of HCC, the etiological factors and pathogenesis mechanisms underlying HCC development appear to be complex and heterogeneous [3, 8–13].

Circular RNAs (circRNAs) are an enigmatic class of RNA with unknown function [14]. With the development of next-generation sequencing (NGS), especially RNA sequencing technology, over 30,000 circRNAs have already been detected [15]. Emerging studies indicates that circRNAs, serving as potential diagnostic and predictive biomarkers, play important roles in the development and progression of multiple cancers [16–21]. It’s reported that circRNAs play a vital role in many aspects of malignant phenotypes, including cell cycle, apoptosis, vascularization, and invasion, and metastasis [15, 22, 23]. Further exploration of the functions of circRNAs as molecular markers in carcinogenesis of cancer will provide potential application perspectives, such as early tumor diagnosis, therapeutic target screening, prognosis prediction, and target-therapy for tumors.

Recently, Li et al [24] found that circ-ITCH had inhibitory effect on esophageal squamous cell carcinoma (ESCC) by suppressing the Wnt/β-catenin pathway. Furthermore, Wan et al [25] replicated the similar mechanism in lung cancer. However, there are no reported studies on the functional roles of circ-ITCH in HCC. In this study, we hypothesized that circ-ITCH might be involved in the carcinogenesis of HCC. SNPs in the circ-ITCH gene region may conclusively affect individual variation in inhibitory effect of circ-ITCH, and modulate individual cancer susceptibility. So investigation of SNPs in circ-ITCH gene contributes to uncovering pathogenesis of HCC. To address this hypothesis, we conducted this genetic association study together with epidemiological follow-up study to delineate the role of circ-ITCH in the development and progression of HCC.

A totally of 1,600 HCC cases and 1,800 cancer-free controls were recruited for the genetic association study. Table 1 presents the basic characteristics of the studied population. The distributions of most variables, including age, gender, HBV infection status, smoking status, and education level, were comparable between the HCC cases and cancer-free controls (P value > 0.05). However, a significant difference for the distributions of alcohol status and family history of cancer were detected (P value < 0.001).

Table 1: Demographic and epidemiological characteristics of the study population

Association analysis between the tagSNPs in circ-ITCH and HCC risk 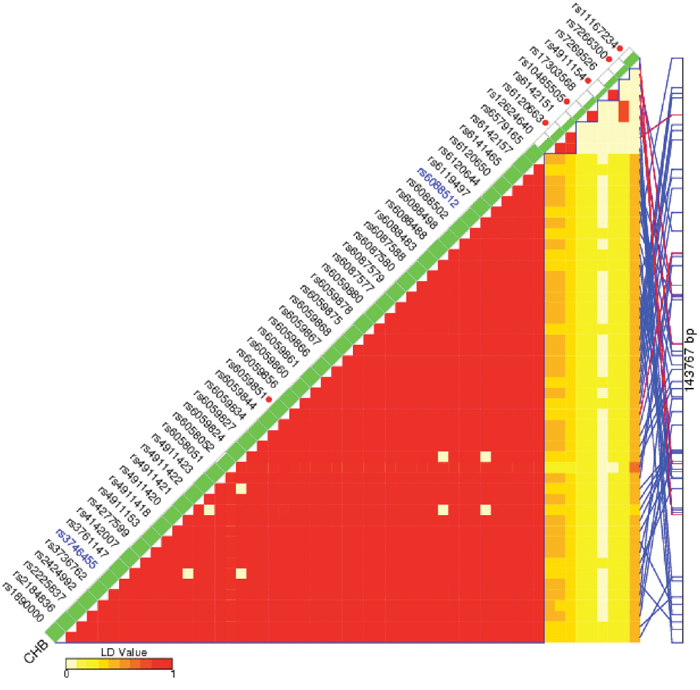 Table 2: Circ-ITCH genotypes and the risk of HCC

Expression of circ-ITCH in HCC and the adjacent tissues

To explore the influence of expression of circ-ITCH on occurrence of HCC, a TaqMan-based qRT-PCR assay was used for the divergent primer set to determine the levels of ITCH in 288 HCC samples and matched adjacent tissues. As shown in Figure 2, the expression level of circ-ITCH was significantly lower in HCC tissues, compared with that in adjacent tissues (P value < 0.001). 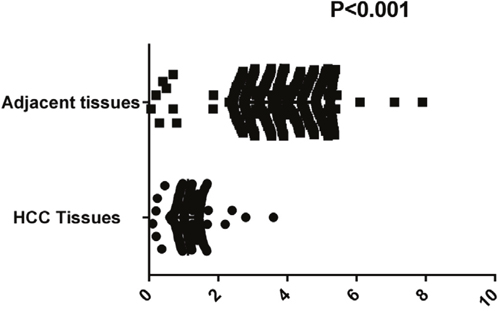 Survival analysis of circ-ITCH in HCC

Furthermore, to determine whether circ-ITCH could serve as prognostic marker for HCC, we analyzed the association between expression of circ-ITCH and prognosis of HCC in the 288 HCC cases with follow-up data. As shown in Figure 3, the difference between the survival curves of the two groups was statistically significant (P value < 0.001). Cox regression analysis indicated that high expression of circ-ITCH was associated with favorable survival of HCC (HR=0.45; 95% CI=0.29-0.68; P value < 0.001). This indicated that circ-ITCH could work as an prognostic indicator for HCC. 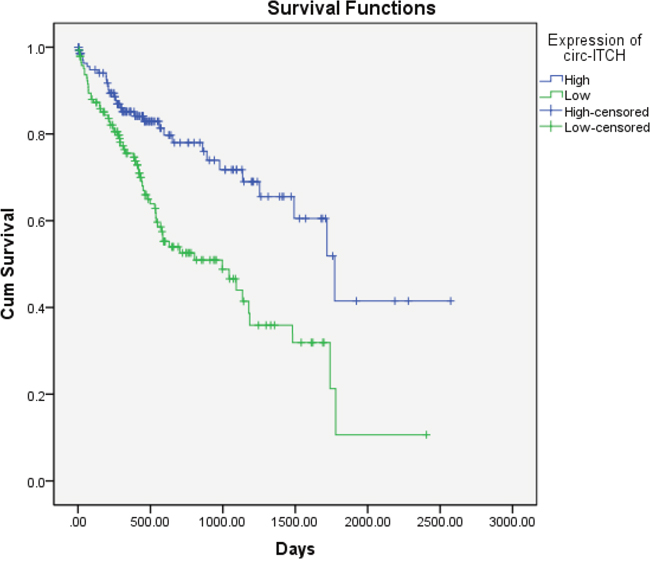 Figure 3: Prognostic value of circ-ITCH. Kaplan–Meier curves were utilized to assess the association between the circ-ITCH and overall survival of HCC patients.

CircRNAs are a novel type of RNAs, which are generated primarily through a type of alternative RNA splicing called “back-splicing,” a downstream splice donor being joined to an upstream splice acceptor through splice skipping or direct splice [16]. They could be used as molecular markers or potential targets for early tumor diagnosis, therapeutic evaluation, prognosis prediction, and even gene therapy for tumors [15]. Li et al [26] found circRNA could be a critical factor in HCC using RNA-seq data of 100 samples consisting of tumor tissues and para-carcinoma tissues from 50 HCC patients were downloaded from the Sequence Reads Archive (SRP068976). Recent studies demonstrated that circ-ITCH Suppresses mutiple cancers proliferation via inhibiting the Wnt/beta-Catenin pathway [24, 25, 27]. Wnt/beta-Catenin pathway, which regulates some of the crucial aspects of cellular processes, plays important role in the carcinogenesis progress of many cancers [28–38]. ITCH could hyper expression promotes ubiquitination and degradation of phosphorylated Dvl2, thereby inhibiting the Wnt/β-catenin pathway [24]. Song et al [37] reported that Wnt/beta-catenin was also an oncogenic pathway targeted by H. pylori in gastric carcinogenesis. Genetic polymorphisms of Wnt/beta-catenin pathway genes are also associated with the susceptibility, survival, efficacy and toxicities of radiotherapy of multiple cancers [39–45]. In current study, we found the expression level of circ-ITCH in HCC tissues was significantly lower than the level in adjacent tissues, which indicated that circ-ITCH worked as an tumor suppressor gene for carcinogenesis of HCC, consistent with its function in ESCC, colorectal cancer, and lung cancer.

Circ-ITCH was located on chromosome 20q11.22, and spans exons 6–13 of gene ITCH, which encodes a member of the Nedd4 family of HECT domain E3 ubiquitin ligases [46]. Mutations in this gene are a cause of syndromic multisystem autoimmune disease [47, 48]. In the genetic association study, we first found that rs10485505 and rs4911154 in circ-ITCH were significantly associated with increased risk of HCC with a relatively large sample size in a well-established population. Using RegulomeDB [49], the score for rs10485505 and rs4911154 were both ‘1f’, which means Likely to affect binding and linked to expression of a gene target. These data open new perspectives on a possible genetic determinants of HCC in candidate CircRNAs.

Our study has several strengths. First, the large sample size provides enough statistical power to detect such moderate associations. Second, we have included the genetic-homogenous participants, which were all Han Chinese population. Although our study revealed some interesting findings, there still exist some limitations. One limitation was that the findings were not validated in an independent cohort. Secondly, further mechanism of circ-ITCH and its SNP affecting susceptibility and prognosis of HCC was not explored here [50]. However, these new findings still provide a detailed genomic landscape in which to examine biological mechanisms of HCC.

In summary, our study showed that the expression level of circ-ITCH in HCC tissues was significantly lower than the level in adjacent tissues, and high expression of circ-ITCH was associated with favorable survival of HCC. We also found that rs10485505 and rs4911154 in circ-ITCH were significantly associated with increased risk of HCC. This study indicates that circ-ITCH not only has prognostic significance, but also susceptibility biomarker for HCC. Meanwhile, genetic variation of circ-ITCH can also be used as the biomarkers for prediction and screening of HCC. These findings should be verified by larger, well-designed epidemiologic and functional studies.

Totally included in current study were 1,600 HCC cases and 1,800 cancer-free controls. All cases were pathologically confirmed as HCC, and all subjects in this study were homogenous Han Chinese. The control subjects were randomly enrolled at the same period when they visit the hospital for physical examinations, matched by age, gender, HBV infection status, and education level. Demographic data and environmental exposure history of each participants were collected by face to face interviews. Blood (10ml) was collected for each patient. Plasma was separated immediately and stored at -80°C before use, while tissue samples were snap-frozen in liquid nitrogen immediately after dissection and then stored at −80°C before RNA extraction. The study was approved by the institutional review board of the hospital, and a written informed consent was collected from all individual participants of the study.

SNPinfo Web Server (https://snpinfo.niehs.nih.gov/) was used for the tagSNP selection of circ-ITCH. As shown in Figure 1, Six SNPs with minor allele frequency (MAF) ≥0.05 in Chinese Han population, including rs6059851, rs6120663, rs10485505, rs4911154, rs7266300, rs11167234, were selected for this study. Genomic DNA was extracted from peripheral blood of each study subject. TaqMan allelic discrimination assay was used to genotype the selected SNPs by using the ABI 7900HT Real-Time PCR System (Applied Biosystems, Foster City, CA, USA). For quality control, we randomly selected 10% of the samples for repeated genotyping, and the results were 100% concordant.

Student’s t test and Pearson’s chi-squared (χ2) test were used to assess the differences in demographic factors between HCC cases and controls. Hardy-Weinberg equilibrium (HWE) of the controls was done by a goodness-of-fit χ2 test. The ORs and 95% CIs were calculated by an unconditional logistic regression model for the associations between genotype distribution and HCC susceptibility. Mann–Whitney U-test was used to analyze the expression difference of circ-ITCH between HCC tissues and adjacent non-cancerous tissues. Patients were divided into low or high expression groups of circ-ITCH according to the median value. Kaplan–Meier and Cox regression analyses were utilized to assess the association between the circ-ITCH and overall survival of HCC patients. Statistical analyses were performed by using SPSS software package (Version 13.0, SPSS Inc., Chicago, IL, USA), and all reported p values were two-sided with a significance level of 0.05.

This study was funded by Innovative team program of Zhengzhou science and Technology Bureau (No.131PCXTD617).