Effectiveness and safety of PD-1/PD-L1 inhibitors in the treatment of solid tumors: a systematic review and meta-analysis

* These authors have contributed equally to this manuscript

Interpretation: PD-1 inhibitors are more effective for improving the PFS, OS, and ORR of cancer patients with little toxicity, despite having little effect on increasing of the DCR.

Escape from immune surveillance is an important characteristic of carcinoma [1]. The development of therapies to enhance tumor immunity has become an important target for cancer treatment strategies [2]. Immune checkpoint inhibitors have achieved remarkable progress in tumor treatment, and two vital checkpoint receptors, CTLA-4 and the programmed death-1 receptor (PD-1), have been studied most extensively in clinical cancer immunotherapy [3, 4]. These receptors play significant roles in regulating the immune response against malignancy.

The CTLA-4 blocking antibody ipilimumab [3] has entered clinical trials for the treatment of different human cancers. PD-1 blocking antibodies have also been studied extensively. PD-1 is a cell surface receptor that belongs to the CD28 immunoglobulin superfamily, which is usually expressed on activated T cells, Tregs, activated B cells, NK cells, and monocytes [4], [5]. PD-1 is an immune checkpoint that plays a significant role in down-regulating the immune system by limiting the activity of T-cells in the periphery during an inflammatory response [6]. The checkpoint receptor PD-1 interacts with its ligands PD-L1 and PD-L2 to inhibit T cell activation and proliferation, thereby promoting immunological self-tolerance [7, 8].

Tumor cells often use the PD-1-PD-L1/2 pathway to evade immune-cell attack [9]. Blockade of this pathway was shown to restore and improve antitumor immune response. In cancer patients, PD-1 is usually highly expressed on T cells and causes tumor-related immune suppression [10]. It has recently emerged as an effective therapeutic option for various cancers, with anti-PD-1 or anti-PD-L1 antibodies showing broad-ranging anti-tumor activity in early-phase trials [11-13].

Notably, the anti-PD-1 antibodies pembrolizumab and nivolumab were approved by the US FDA for the treatment of patients who were previously treated for metastatic melanoma [14]. Nivolumab is a monoclonal antibody against PD-1 [15] and has been tested in trials for the treatment of melanoma, non-small cell lung cancer (NSCLC) [16], ovarian cancer, and renal cell carcinoma [17]. Pembrolizumab is a monoclonal antibody that blocks the interaction of PD-1 on T cells with its ligands [18], which is suggested for antitumor activity in patients with advanced NSCLC or advanced melanoma. In addition, a series of phase I/II trials using pembrolizumab on other types of cancer is currently being investigated. Other anti-PD-1 antibodies and anti-PD-L1 antibodies are also being tested in different clinical trials, such as pidizumab [19], MPDL3280A [20], and BMS-936559 [12].

Recent studies have shown that anti-PD-1 and anti-PD-L1 monoclonal antibodies play positive roles in the development of cancer treatment. So far, a number of phase 2 or 3 studies have been completed on PD-1 blockade for different tumor treatments, and clinical trials for PD-L1 inhibitors are still in progress. Thus, we performed a meta-analysis that incorporates all available results to evaluate the efficacy and safety of PD-1 inhibition therapy.

Our search strategy originally retrieved 8676records. Among these, 7887articles were excluded for not being RCTs, and 798 articles were excluded by screening the title and abstract. After carefully reading the full texts of the remaining 71 articles, 10 eligible studies [21-30] met the inclusion criteria, as shown in Figure 1. Finally, a total of 5246 patients were enrolled. The median age of the patients was similar and ranged from 59 to 66 years. The 10 included studies were all published between 2014 and 2016. Of the 10 included studies, 7 studies used the PD-1 inhibitor nivolumab, 2 studies used the PD-1 inhibitor pembrolizumab, and 1 study investigated the PD-L1 inhibitor atezolizumab. There were 6 studies [23, 26-30] [23, 26-30] [25, 28-32] [25, 28-32] [25, 28-32] about melanoma, 3 studies were related to NSCLC treatment, and 1 study was on renal-cell carcinoma. The detailed characteristics of the 10 studies are presented in Table 1.

Table 1: Characteristics of the trials included in the meta-analysis 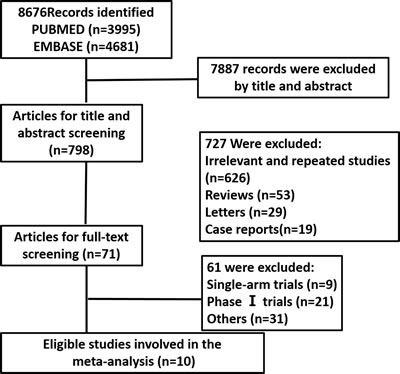 Figure 1: The process of literature search and eligible trials selection. N: the number of studies.

PFS, OS, ORR, DCR, SDR and PDR are the important end points of tumor RCTs. Progressive-free survival (PFS) is a measure of the activity of a treatment on tumors. It is the time that passes from a certain date (generally the first day of treatment, or the day in which a patient is enrolled in a clinical trial) and the date on which disease “progresses” or the date on which the patient dies, from any cause. Overall survival (OS) is a primary end point usually, Patients with tumors can die directly from that disease or from an unrelated cause. When the precise cause of death is not specified, this is called the overall survival rate or observed survival rate. Researchers often use mean overall survival rates to estimate the patient’s prognosis. Objective response rate (ORR) is another important end point of clinical cancer research, Objective Response Rate is the percentage of patients whose cancer shrinks or disappears after treatment. Which often used as a clinical endpoint for clinical trials of cancer treatments. Disease Control Rate (DCR) is the sum of complete response rate, partial response rate and stable disease rate. Progressive Disease Rate (PDR) is the percentage of patients whose cancer progress.

Table 2: Summary results of the pooled HRs for PFS and OS by subgroup analysis 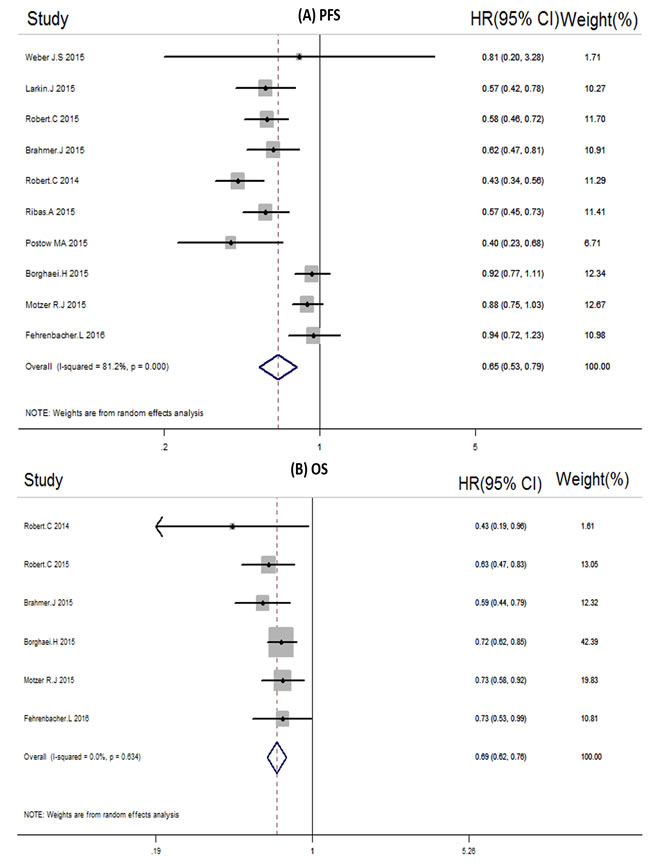 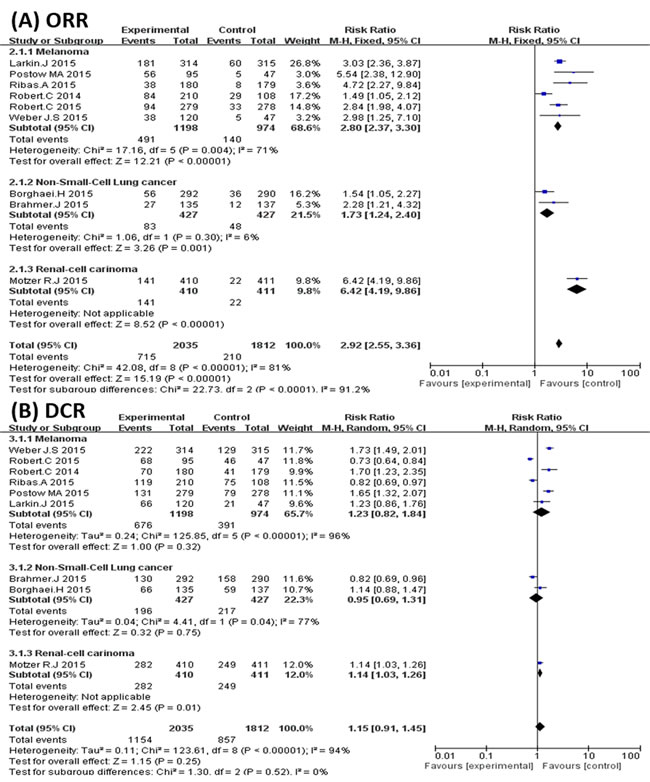 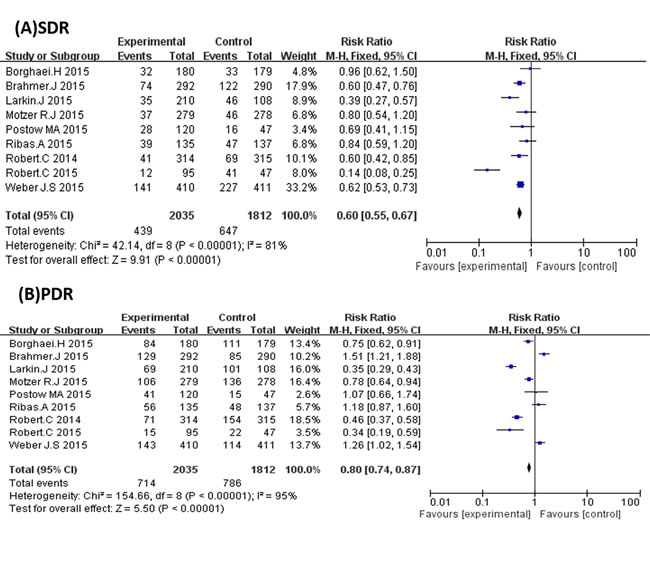 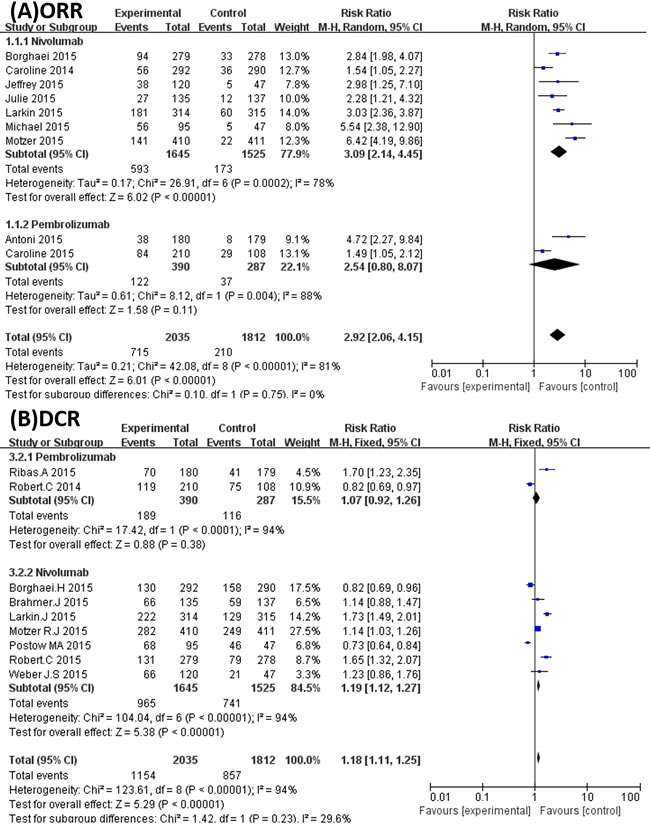 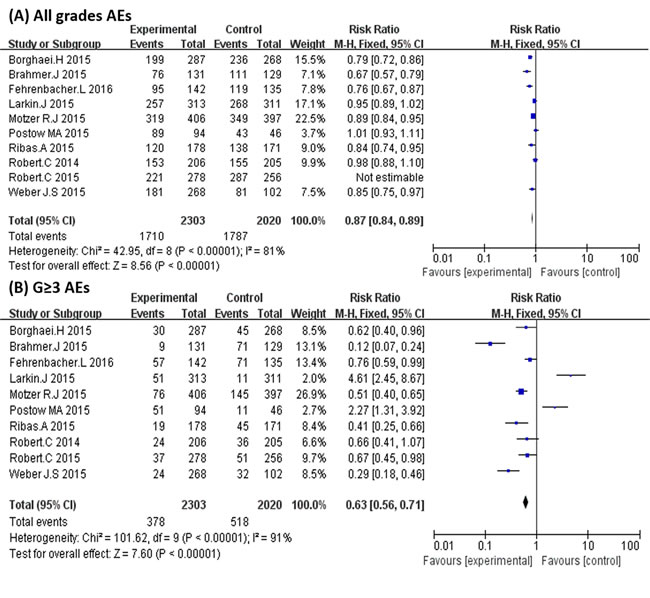 Sensitivity analyses were carried out to evaluate the stability of the studies according to the effects of omitting each study. The sensitivity analysis results of PFS, ORR, SDR, and DCR showed that no individual study changed the pooled data overall, which suggests that our results are stable (Figure 7). 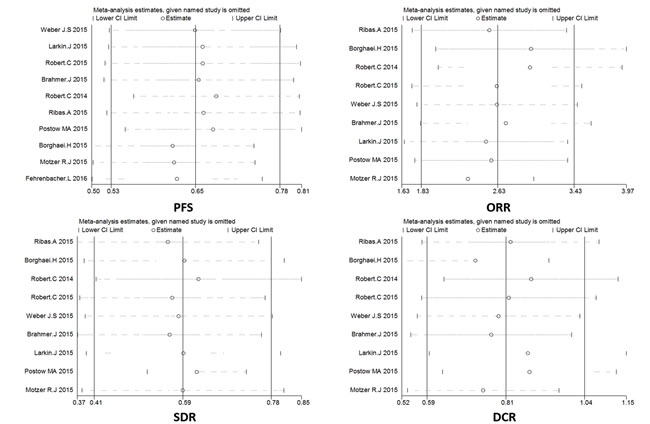 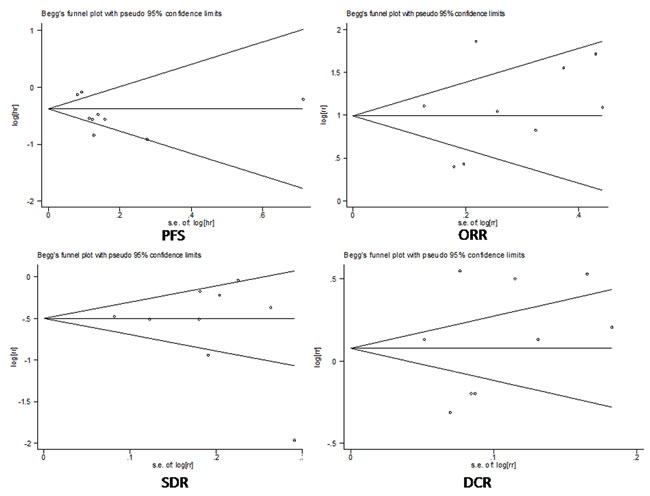 The DCR included complete response (CR), partial response (PR), and stable disease (SD). The main reason for the discrepancy between PFS/OS/ORR and DCR may be that so many patients reached the stabile disease status in the control arms compared with the PD-1 arms that PD-1inhibitors produced weak increases in the DCR. On the other hand, PD-1 inhibitors had a slight trend of decreasing the PDR compared with control arms (RR 0.76; 95% CI 0.53 to 1.09; P = 0.13), although the difference was not significant. All of these results suggest that PD-1 inhibitors were better at improving the PFS, OS, and ORR of cancer patients, and they may have potential as powerful antitumor drug.

PD1/PD-L1 inhibitor drugs target immune checkpoints, and they may be very effective in the treatment of immune sensitive tumors. However, they may lack efficacy in some immune-insensitive cancers. The main cancers included in our research were melanoma (6 articles) and NSCLC (2 articles). Melanoma and NSCLC are immune-sensitive cancers and have the most abundant PD-L1 expression [33]. It has been reported that monoclonal an­tibodies against PD-1/PD-L1 interaction will prolong the OS in melanoma and NSCLC patients [34]. The FDA has approved the use of PD-1 inhibitors in the treatment of melanoma and NSCLC.

It is well known that the immune system plays a vital role in antitumor activity. PD-1 is one of the important immune checkpoint receptors. In recent years, a series of drugs have been developed to target PD-1 checkpoint receptors, such as pembrolizumab, nivolumab, and pidilizumab [35]. Our study included two PD-1 inhibitors, nivolumab and pembrolizumab, which are monoclonal antibodies that bind to the PD-1 receptor and block its interaction with PD-L1 and PD-L2. This results in the release of the PD-1 pathway-mediated inhibition of the immune response, including the anti-tumor immune response [35, 36]. Both drugs were approved by the FDA for the treatment of cancers last year. We evaluated the antitumor effect of nivolumab and pembrolizumab, and the results showed that patients treated with these drugs had higher ORR (593/1645 (36%); 122/390 (31%)), which is in line with our expectations. However, the DCR of both nivolumab and pembrolizumab populations was not satisfactory. There was only one PD-L1 inhibitor in our study, and we had only enough data to compare anti-PD-1 and anti-PD-L1 immunotherapy.

The antitumor effect of PD-1 inhibitors is mainly due to the unrestrained T cell activation with immune checkpoint blockade, which may induce immune-related AEs. AEs like rash, fatigue, cough, diarrhea, constipation, and arthralgia were found in more than 20% of cancer patients receiving PD-1 inhibitors, but they were mainly grade 1 or 2 AEs and could be managed [36]. In this study, we pooled the total number of all grades of AEs, which showed that PD-1 inhibitors had an effect of decreasing AEs in all grade levels, especially AEs with grade ≥ 3. Traditional chemotherapeutics usually induce serious adverse events. However, our results revealed that PD-1 inhibitors have little toxicity and even have an effect of decreasing the risk of various AEs. In conclusion, PD-1 inhibitors are better for improving the PFS, OS, and ORR of cancer patients with little toxicity, but they are weak in increasing the DCR.

We carried out a comprehensive systematic retrieval for potential articles in the PubMed and EMBASE databases from inception to February 22th, 2017. The search terms used were “PD-1 inhibitors” or “PD-L1 inhibitors” or “Nivolumab” or “Pembrolizumab ” or “Atezolizumab” or “BMS936559” or “MPDL3280A” or “Durvalumab” or “Avelumab” or “MED14736”, combined with “Cancer” or “Tumor” or “Carcinoma”. The search was limited to clinical trials without restrictions on publication language. For comprehensive retrieval of articles, we searched relevant meeting abstracts, clinical trials in the clinical trial registry (https://clinicaltrials.gov/), and related review articles. To ensure the quality of eligible clinical trials, studies published with full text were included.

The following criteria were used for inclusion in the meta-analysis: randomized control trials (RCTs); the involvement of cancer patients; the use of PD-1/PD-L1 inhibitors alone or in combination with other agents for the treatment group along with placebo or other chemotherapeutic agents for the control group; at least one objective type of data reported, such as progression-free survival (PFS), overall survival (OS), objective response (including complete response and partial response), and adverse events. Studies were excluded in the following conditions: case reports; reviews; retrospective or prospective observational cohort studies; single-arm RCTs; and PD-1/PD-L1 inhibitors were used in both the experiment arms and control arms. When repeated studies were identified, the most elaborate and latest articles were included. Two investigators (Bao Z and Wang X) independently reviewed the articles for eligibility.

All pooled data were analyzed with Stata version 12.0 (StataCorp, College Station, Texas) and Review Manager (version 5.2, The Cochrane Collaboration, Oxford, UK). All statistical tests were two-sided, and P≤0.05 was considered statistically significant. The HR and 95% CIs were used to assess the OS and PFS between the PD-1 inhibitor group and control group. Data on objective responses, stable disease, and adverse events were also pooled to calculate RR with 95% CIs. The degree of heterogeneity was measured by the I2 statistic [37] with I2 < 25%, 25-75%, and > 75% representing low, moderate, and high degrees of inconsistency, respectively.

We used a fixed-effect model if the heterogeneity was low in the analyses, and a random-effects model was applied otherwise. Subgroup analysis was also carried out according to the different tumor types and different PD-1 inhibitors. Sensitivity analysis was performed to observe the effect of a single study on the overall results. We used a Funnel plot and Egger’s regression asymmetry test to identify the potential publication bias of the studies [38].

The authors declare no conflicts of interest in this work.