Method: The retrospective study included 241 consecutive patients with laryngeal cancer between January 2009 and December 2009. The relationships between PDW and clinicopathological characteristics were analyzed. Kaplan-Meier method and Cox regression were used to evaluate the prognostic impact of PDW.

Conclusions: Elevated PDW might be a novel prognostic marker in laryngeal cancer.

Laryngeal cancer represents the most common malignancy of the head and neck worldwide. Despite the improvement of the therapeutic techniques, some patients still recur after treatment. Therefore, it is of great importance to look for appropriate and effective prognostic markers in laryngeal cancer.

Platelets play a pivotal role in cancer progression and metastasis [1]. There is emerging evidence to suggest that platelets mediate tumor cell growth, angiogenesis, and dissemination [2]. Increased platelets are correlated with a decrease in overall survival and poorer prognosis in various types of cancer, including pancreatic cancer, gastric cancer, colorectal cancer, endometrial cancer, and ovarian cancer [3–7]. However, platelet count is determined by the balance between the rate of production and consumption of platelets. A normal platelet count could conceal the presence of highly hypercoagulative and pro-inflammatory cancer phenotypes in the presence of efficient compensatory mechanisms [8].

Mean platelet volume (MPV), the most commonly used measure of platelet size, is a surrogate marker of platelet activation [9]. Altered MPV levels were found in gastric cancer, ovarian cancer, lung cancer, colon cancer, and breast cancer [10–13]. Platelet distribution width (PDW), another platelet index, indicates variation in platelet size [14]. However, its clinical implications in laryngeal cancer remain unclear. In the present study, therefore, we aimed to investigate MPV and PDW levels in patients with laryngeal cancer and evaluated the effects of MPV and PDW levels on pathological parameters and clinical outcome. 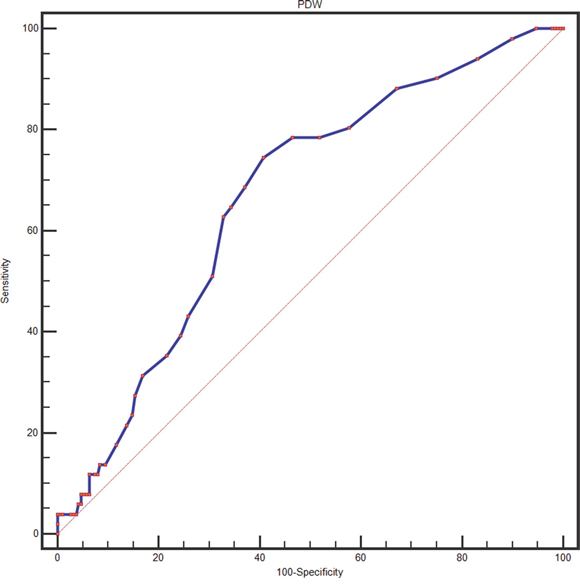 The relationships between PDW and clinical characteristics were shown in Table 1 and Table 2. No significant differences were found between the groups with regard to age, gender, smoking, tumor site, tumor differentiation, tumor depth, lymph node metastasis and tumor stage.

Table 1: Baseline characteristics of patients with laryngeal cancer according to PDW levels

Table 2: Baseline characteristics of patients with laryngeal cancer according to PDW levels

We used Kaplan-Meier survival analysis to evaluate the clinical outcomes between different subgroups divided by PDW levels. As presented in Figure 2, patients in high PDW levels had a worse 5-year OS (67.2 % vs. 89.6 %, P < 0.001) than those in low PDW levels. We further undertook univariate and multivariate analysis to make sure whether PDW is an independent predictor for cancer prognosis. As summarized in Table 3, PDW was strongly associated with clinical outcomes (P < 0.001) in univariate analysis. Also, age (categorical variable), platelet count, MPV (categorical variable), tumor site, tumor differentiation and tumor stage were statistically significant in univariate analysis. We put those parameters in multivariate analysis (Table 4) and confirmed that PDW still was predictable for cancer outcomes (P < 0.001). Patients with PDW > 16.7 % had a hazard ratio (HR) of 4.381 [95% confidence interval (CI): 2.313-8.298, P < 0.001] for OS. 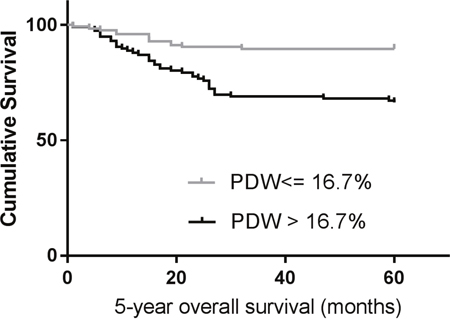 Abbreviations: see to Table 1 and Table 2.

This study found that PDW is correlated with patient’s survival and is an independent risk factor for prognosis in laryngeal cancer.

Despite recent interest in clinical implications of activated platelets in the setting of cancer, the scope of available data is still limited by the type of malignancy and clinical outcomes studied. Thrombocytosis is associated with reduced survival in patients with several types of malignancies, such as lung cancer, ovary cancer, endometrium cancer, rectum cancer, kidney cancer, stomach cancer, pancreas cancer, and breast cancer. Increased platelets foster cancer progression and metastasis by shielding circulating tumor cells from immune surveillance and killing [15].

The molecular mechanism to explain the association between PDW and survival in laryngeal cancer has yet to be elucidated. Bone marrow cells (including megakaryocytes) dys-function may contribute to altered PDW. PDW is a measure of platelet heterogeneity caused by heterogeneous demarcation of megakarocytes [16]. Recent reports demonstrated several cytokines, such as interleukin-6 (IL-6), granulocytes colony stimulating factor (G-CSF) and macrophage colony stimulating factor (M-CSF), regulate megakaryocytic maturation, platelet production and platelet size [17]. IL-6 promotes tumor angiogenesis, metastasis and metabolism [18]. Furthermore, the cytokines G-CSF and M-CSF that be secreted by tumor cells could stimulate megakaryopoiesis and subsequent thrombopoiesis in cancer [19]. Another possible mechanism is that platelets promote the hypercoagulable state in cancer. Activated platelets create a procoagulant micro-environment that enables the tumor cells to cover themselves with platelets and evade the host immune system [20].

A previous study showed that high platelet-to-lymphocyte ratio predicts poor prognosis in patients with laryngeal carcinoma, suggesting the crucial role of platelets in tumor growth and tumor invasion [21]. Our present study confirmed the key role of activated platelet in laryngeal cancer using a simple platelet parameter. These data are also in line with the current concept that anti-platelet is considered to be a part of cancer adjuvant therapy [2]. Moreover, our findings will provide some promising guidance for clinical management and personalized therapeutics in treating patients with laryngeal cancer.

The study has couple of limitations. First, this was a single-center retrospective study and additional larger validation studies with multiethnic groups are needed to confirm our results. Second, we were unable to explore the exact mechanism of PDW in laryngeal cancer. Third, the patients were composed of Chinese. The application to other ethnic groups still needs further investigation.

This retrospective study examined the records of 241 consecutive cases with a diagnosis of laryngeal cancer between January 2009 and December 2009 within the Harbin Medical University Cancer Hospital. All patients undergone surgical resection for laryngeal cancer. The pathologic diagnoses of laryngeal cancer were evaluated by pathologists from biopsy reports. None of the patients received preoperative chemotherapy or radiation therapy. Patients were excluded if they had hematological disorders, coronary artery disease, hypertension, diabetes mellitus, and medical treatment with anticoagulant, statins, and acetylic salicylic acid.

Standard demographic and clinicopathological data were collected from the patients’ records in hospital. Survival data were obtained through follow-up. Overall survival (OS) was defined as the interval from the date of diagnosis to death or last follow-up. The median follow-up time was 60 months.

The Institutional Ethics Review Board of the Harbin Medical University Cancer Hospital approved this study prior to commencement of data collection and waived the informed consent requirement because it was a retrospective study.

All statistical analyses were performed using SPSS Statistics version 22.0 (SPSS Inc., Chicago, IL, USA). All continuous data are expressed as means ± SD or medians (interquartile range), and the categorical data are expressed in percentages. The continuous variables were compared with Student’s t test or the Mann-Whitney U test, as appropriate, whereas categorical variables were compared with the Chi-square test. A receiver operating characteristic (ROC) curve was generated to find cutoffs of MPV and PDW with optimal diagnostic sensitivity and specificity. The analysis of overall survival was performed by the Kaplan-Meier method and compared using the Log-rank test. To determine prognostic factors, multivariate regression analysis was performed using the Cox proportional hazards model for variables with P < 0.10 in the univariate Cox analyses. Differences were considered significant at P < 0.05.

This work was supported by the Harbin special fund for scientific and technological innovation talents (RC2016XK004068) and by Science Foundation of Heilongjiang Academy of Medical Science (Grant No. 201714).