Materials and Methods: In this explorative prospective study, peripheral blood samples were collected from AGC patients before initiating first-line cisplatin-based chemotherapy (S-1 + cisplatin or S-1 + cisplatin + docetaxel). Peripheral blood mononuclear cells were analyzed for 25 immune subsets by multicolor flow cytometry. PFS and OS were compared between the patients divided into high and low (≥ and < median, respectively) groups based on the median value for each immune cell subset.

Conclusions: The peripheral immune status of Gr-MDSCs appears to affect the prognosis in AGC. Further research is needed to confirm the clinical value of the level of circulating Gr-MDSCs as a prognostic and/or predictive marker in AGC.

Almost one million new cases of gastric cancer were estimated to have occurred in the world in 2012, making it the fifth most common cause of cancer-related death, though its incidence is declining in developed countries [1]. In Japan, gastric cancer is the first most common malignant disease in men and the third in women. While the mortality rate of gastric cancer has been continuously decreasing, it still shows the second highest mortality rate [2]. Systemic chemotherapy is of crucial importance for advanced gastric cancer (AGC) patients, in order to obtain palliation of symptoms and improve survival. However, the prognosis for patients with AGC remains unsatisfied with median survival times of 10–13 months [3, 4].

Immune cells respond to tumor cells and eliminate them in cancer patients. On the other hand, some study showed that the immune system could also prompt tumor progression [5–7]. Therefore, the balance between activation and suppression of immune responses may determine whether cancers avoid detection by immune recognition.

Myeloid-derived suppressor cells (MDSCs), one of the representative immune suppressive cells, are a heterogeneous population of myeloid lineage affecting immature state and having the capacity to suppress T-cell responses. Human MDSCs are classified into CD15+ granulocytic MDSCs (Gr-MDSCs) or CD14+ monocytic MDSCs (M-MDSCs). As for functional differences, Gr-MDSCs are known to express high levels of arginase and reactive oxygen species (ROS), whereas M-MDSCs express both arginase and inducible nitric oxide synthetase but do not produce high levels of ROS [8]. Several suppressive functions of MDSCs have been suggested such as inhibition of T cell (CD4+ and CD8+) activation, and increase T cell apoptosis [9, 10]. Recent studies have shown that circulating MDSCs are significantly increased in cancer patients and correlate with clinical cancer stages and metastatic disease [11]. In addition, several studies reported that tumor tissues with high MDSCs infiltration are related to poor prognosis and resistance to various therapies [8, 12].

FoxP3+ T regulatory cells (Tregs), other immune suppressive cell, accumulate in tumors and increase in the peripheral blood of cancer patients, and the increased Tregs in tumors frequency has been shown to be a marker of poor prognosis in various types of cancers [13, 14].

To date, many retrospective studies have shown the association between these immune cells infiltration and prognosis in various types of tumors. For gastric cancer, several studies have reported a positive association between the extent of the tumor-infiltrating lymphocyte (TIL) infiltrate and a prognosis [17–19]. However, because the limited opportunities for obtaining resected specimens in AGC patients and TIL analyses are difficult to conduct, alternative immunological parameters in more easily assessable samples for predicting prognosis are needed. The association between peripheral immune status and a prognosis in patients with AGC has not yet been fully cleared to the present time. Thus, we conducted prospective study to quantify 25 immune cell subsets of the lymphocytes in the peripheral blood, and investigate their prognostic impacts in patients with AGC receiving cisplatin-based first-line chemotherapy.

Associations between the quantity of each immune cell subset and PFS

Table 2: Association between the quantity of each immune subset and progression-free survival

* Low group (< median) in each immune subset was used as a reference. 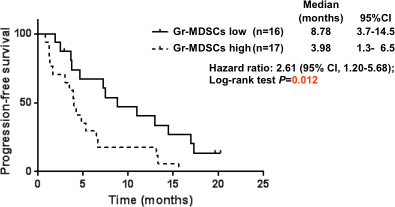 Associations between the quantity of each immune cell subset (divided to high and low groups by its median value) and OS are shown in the Table 4. The MST was 8.9 months and 13.9 months in the patients with Gr- MDSCs high and in those with Gr-MDSCs low (p = 0.114; Figure 3), respectively.

Table 4: Association between the quantity of each immune subset and overall survival

* Low group (< median) in each immune subset was used as a reference. 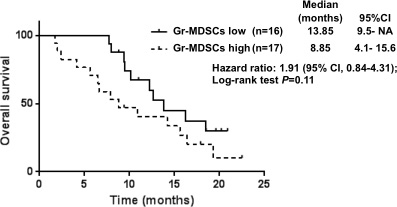 Changes in proportional of Gr-MDSCs during chemotherapy

We investigated the relationship between the changes in proportion of Gr-MDSCs during 1st-line systemic chemotherapy and prognosis. 24 samples at 2nd blood collection were available. The means of % Gr-MDSCs was compared between before (1st blood collection) and after chemotherapy (2nd blood collection) using a paired-t test; however, there was no tendency for changes of %Gr-MDSCs (Supplementary Figure 2A). When dichotomized based on increase or decrease in the proportion of Gr-MDSCs from baseline versus, there were no correlation with OS (Supplementary Figure 2B).

Table 6: Changes in the proportion of Gr-MDSCs (%) from baseline and the time of 1st-line progression

Comparison of plasma cytokine concentration according to Gr-MDSCs subgroups

We also analyzed the association between cytokine concentrations and survival (Supplementary Tables 4 and 5). Moreover, we performed multivariate analyses that included cytokines (IL-6 and IL-8 were statistically significant in univariate analyses) in the final models (Tables 3 and 5) as sensitivity analyses (data not shown). In this sensitivity analyses, the peripheral immune status of Gr-MDSCs consistently appears to affect the prognosis in AGC.

In this prospective observational study, we analyzed 25 immune cell subsets status, and investigated whether immune cell subsets affected the survival in advanced gastric cancer patients. We found that the high proportion of Gr-MDSCs before chemotherapy was poor prognostic factor for PFS in AGC patients who received cisplatin-based chemotherapy, and tended to be correlated with shorter OS, suggesting that this characteristic might serve as a prognostic factor. This study suggested that immune status may affect the efficacy of chemotherapy in AGC patients.

Many studies reported a survival benefit associated with the presence of TIL [17–22], including gastric cancer. There are very few studies addressed in the clinical significance of MDSCs in gastric cancer tissues. Choi et al. reported the prognostic effects of tumor infiltrating MDSCs. They investigated the frequencies of TILs in 28 surgically resected gastric cancer tissues by using flow cytometry, and showed an increased proportion of MDSCs in tissues was a poor prognostic factor [23]. However, in their study, the association between MDSCs status in peripheral blood and tumor tissues was not investigated. Although information obtained from surgical specimens appear extremely useful, however, TIL analyses are difficult to conduct, giving the limited opportunities for obtaining sufficient specimens in AGC patients. Therefore, we studied the immune cell subsets in peripheral blood samples which were easily obtained with minimally invasive procedure.

In cancer patients, MDSCs in the peripheral blood increase substantially [24–26]. Correlations between circulating number of MDSCs in various types of cancers including gastric cancer and survival have been investigated in two studies so far. Gabitass et al. reported that the high percentage of MDSCs were an independent prognostic factor in patients with pancreatic, esophageal, and gastric cancer [27]. In their report, 25 non-cardia gastric cancer patients were included. Of these, 17 patients were stage IV disease. Wang et al. also found that gastric cancer patients with high MDSCs exhibited a significantly shorter survival time compared with patients with low MDSCs [28]. In the Wang’s study using the similar definition of MDSC subtype to the present study, there was no difference in OS between the high and low groups. The discrepancy between the Wang’s and this study was considered to be caused by the difference in the study population; stage I-IV cases in the Wang’s study and stage IV or recurrent cases in this study.

We assessed how the change in proportion of Gr-MDSC during 1st-line chemotherapy affected OS. Of 37 patients, we could obtained 7 paired pretreatment and 1st-line PD blood samples. In the low group of Gr-MDSCs (n = 2), all patients had comparatively low proportion of Gr-MDSCs at PD, and they had favorable long-term survival. On the other hand, in the high group of Gr-MDSCs at baseline, most patients had high proportion of Gr-MDSCs at PD and they had short-term survival. Interestingly, one of five who showed decrease in Gr-MDSCs compared to pretreatment samples, survived long. Preclinical works have suggested that two chemotherapeutic drugs, gemcitabine and 5-fluorouracil (5-FU), deplete MDSCs. As compared to gemcitabine, 5-FU induced a more potent apoptosis-mediated MDSC depletion in vitro and in vivo [29, 30]. Indeed S-1, an oral prodrug of 5-FU, administrated in all patients in our study, that might relate to the changes of MDSCs numbers. Although we could analyze only limited patient samples in high group of Gr-MDSCs, it is speculated that the decrease in Gr-MDSCs level before starting 2nd-line chemotherapy might occur among the rest cases without blood samples available, which could be one of the reasons for not having statistical significance difference in OS between two groups.

We also evaluated plasma cytokines that affect the formation of immune cell subsets. Among eight cytokines, IL-8 was significantly higher in the Gr-MDSCs high group than in the Gr-MDSCs low group. Previous papers showed that IL-8 was contributed to gastrointestinal carcinogenesis through increased recruitment of MDSCs [31]. Furthermore, increased levels of circulating MDSCs were associated with increasing advanced disease stage, increased serum IL-8 levels, and defective T-cell function [32]. From these findings, we suggest that increased IL-8 in our cohort may have contributed to the adverse immune status.

This study has some limitations. First, our study consisted of small number of samples. This resulted in statistical underpowered and limited our ability to identify statistically significant differences among the immune cell subsets. Therefore, the results need to be validated in a prospective manner with sufficient sample size. Second, the possibility that the high population of diffuse-type in our study may affect the immune status cannot be completely excluded. Despite these limitations, our study represents the largest flow cytometric characterization of peripheral immune cell subsets in AGC published so far.

Peripheral blood was collected within 5 days before initiating chemotherapy. The second was performed just before the 3rd cycle (11th week) in the CS cohort or the 3rd cycle (9th week) in the DCS cohort, respectively, and 3rd collection was done at 6 months after initial chemotherapy in both cohorts. In case dicontinuing chemotherapy from any reason before the 2nd or 3rd blood collection, blood was collected at the time of discontinuation. Peripheral blood mononuclear cells (PBMCs) were isolated from peripheral blood by density gradient centrifugation. MDSCs was measured in fresh PBMCs immediately after collection because previous study demonstrated that a part of MDSCs was decreased by cryopreservation [33]. DC was measured at the same time as measurement of MDSCs because common panel was used for both subsets. The rest of PBMCs were cryopreserved and used for measurement of T cells, Tregs, and NK cells.

Definition and analysis of immune subsets

Measurement of cytokines in plasma

We thank all the participants, physicians, nurses and staff members who supported this study. We also thank Kei Nakano-Miura and Tsukasa Shinohara, who provided invaluable technical support.

This work was supported in part by JSPS KAKENHI (Grants-in-Aid for Scientific Research), a Grant-in-Aid for Cancer Research from the Ministry of Health, Labor and Welfare of Japan and the National Cancer Center Research and Development Fund (23-A-44 and 26-A-11).