Lung cancer, which can be broadly divided into small cell lung cancer (SCLC) and non-small cell lung cancer (NSCLC), is the most prevalent cancer worldwide [1]. Certain prognostic factors including advanced stage disease at diagnosis, poorly differentiated, abnormal activation of oncogene are predictive of poor survival in patients with NSCLC. Squamous cell carcinoma (SCC) accounts for approximately 30% of all cases of lung cancer [2]. The number of treatment options for lung adenocarcinoma (ADC) has increased in recent decades following the identification of sensitizing epidermal growth factor receptor (EGFR) mutations and anaplastic lymphoma kinase (ALK) rearrangements as molecular targets for effective agents [3]. However, most of the molecular target therapies used for the treatment of ADC are not indicated for SCC because the latter disease lacks specific genetic alterations. Blocking immunecheckpoints with monoclonal antibodies has emerged as a new therapeutic strategy for treating SCC and has yielded a favourable clinical outcome in affected patients [4]. Such results highlight the importance of immune checkpoints in SCC tumourigenesis.

The programmed death 1 (PD-1) pathway is a major immune checkpoint. The binding of PD-1 ligand (PD-L1) to PD-1 induces activated T-cell apoptosis or exhaustion, and agents that block this inhibitory signal have been shown to enhance T-cells activity [5]. Previous studies have shown that increased PD-L1 expression occurs in many solid tumours, including breast cancer [6], NSCLC [7], hepatocellular carcinoma[8], gastric cancer[9], colorectal cancer[10], renal cell carcinoma[11], and testicular cancer[12], as well as papillary thyroid cancer[13]. Several meta-analyses have demonstrated that high PD-L1 expression levels are correlated with adverse clinical and pathologic features, as well as an increased risk of death, in many cancer types [14–17]. However, the data regarding the prevalence and prognostic role of PD-L1 expression in SCC remain controversial. A meta-analyse demonstrated that NSCLC patients with high PD-L1 expression had a poor OS [18]. However, another meta-analysis did not indicate PD-L1 as a prognostic predictor for NSCLC [19].

18F-Fluorodeoxyglucose positron emission tomography (18FDG-PET) is an important noninvasive tool used for the diagnosing NSCLC and performing TNM staging in patients with the disease. The maximum standardized uptake value (SUVmax) on FDG-PET is widely used in clinical practice because of its simplicity [20]. A high SUVmax has been reported to be an important prognostic factor in patients with NSCLC [21]. Several studies have demonstrated the existence of a correlation between the uptake of FDG and the levels of biomarkers such as EGFR mutations [22], VEGF[23], Ki-67 [24] and COX2 [25]. However, the correlation between FDG uptake and PD-L1 expression has not been assessed.

The clinical characteristics of the 84 patients enrolled in the study are presented in Table 1. The median age of the study population at the time of diagnosis was 63 years (range, 34–85 years), and the majority of patients (77.4%) were male. Sixty-one (72.6%) of patients were smokers, and 75% of the cohort comprised patients with stage I and II disease. After curative resection, 54 patients received platinum-based adjuvant chemotherapy, and 77.8% of patients were treated with up to 4 cycles of chemotherapy. A total of 12 patients (14.3%) received adjuvant chemotherapy followed by radiotherapy. The median follow-up time of was 27.8 months (range, 4.3-78 months). The median SUVmax was 11.2 (range, 3.1-30.2). Patients were divided into high and low SUVmax groups according to the median SUVmax. Representative examples of patients with surgical pulmonary SCC who had a high or low SUVmax are shown in Figure 1. The demographic and clinical characteristics of the study population are shown in Table 1. 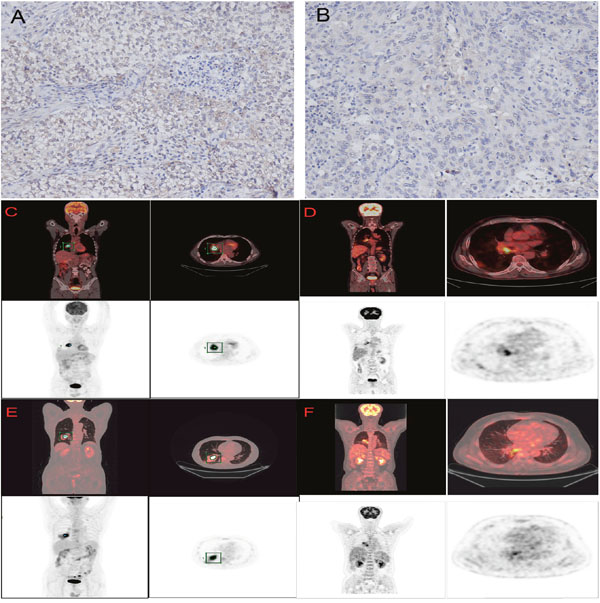 Positive PD-L1 immunostaining was observed in the membranes and/or cytoplasms of tumour cells. Representative examples of PD-L1 staining patterns are shown in Figure 1. Positive PD-L1 protein expression was noted in 49 of the 84 patients with SCC enrolled in this study (58.3%).

Correlations between PD-L1 expression and the SUVmax and clinicopathological characteristics

Table 2: Associations between clinicopathologic parameters and PD-L1 expression and the SUVmax

Table 3: Correlation between PD-L1 expression and the SUVmax

Prognostic value of PD-L1 expression and the SUV max 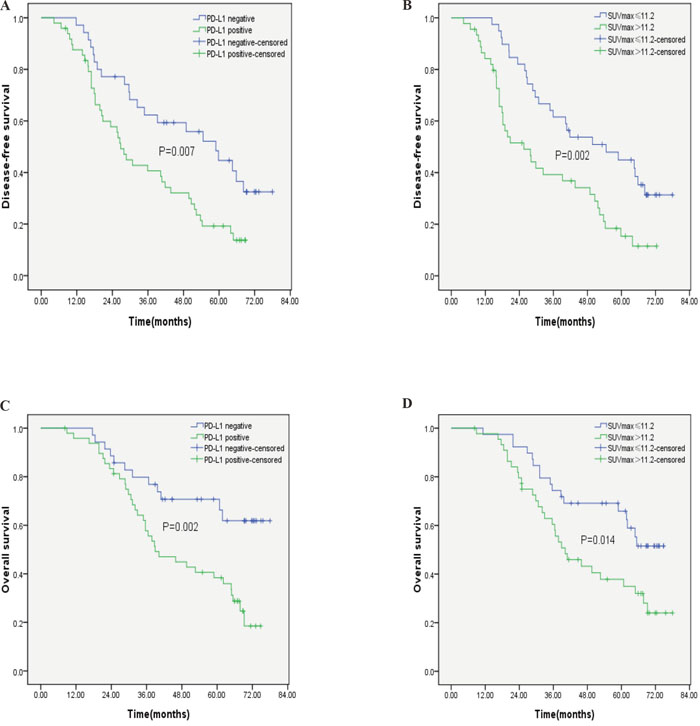 The SUVmax is the 18F-FDG PET/CT parameter most commonly used for making diagnoses, performing TNM staging and monitoring for therapeutic effects because of its high reproducibility and availability. In addition, various studies have described the prognostic significance of SUVmax in both early and advanced NSCLC [32–33]. A systematic review and meta-analysis showed that a high SUVmax is related to inferior overall survival in patients with NSCLC [34]. However, the prognostic significance of the SUVmax in SCC of the lung remains controversial. The goal of this study was to evaluate the significance of the SUVmax as a prognostic factor in SCC. We found that a high primary tumour SUVmax is a poor prognostic factor in patients with SCC. In contrast, Tsutani and colleagues showed that a high primary tumour SUVmax was a powerful prognostic determinant in patients with ADC, but not in patients with SCC of the lung [35]. The use of different SUVmax cut-offs, as well as differences in sample sizes, may account for the differences in outcomes between our study and that mentioned above. We also investigated the biological characteristics of tumours with high and low FDG uptake. Our study showed that the SUVmax was strongly correlated with lymph node metastasis and tumour differentiation in patients with SCC.

A novel therapy based on PD-1/PD-L1 inhibitors known to have impressive antitumour activity in patients with NSCLC recently became the standard therapy for NSCLC [36]. In this age of personalized medicine, clinicians are faced with the following important question: how can physicians identify patients who are more likely to benefit from anti-PD-1/PD-L1 treatment? The findings of recent studies indicate that increased PD-L1 expression has emerged as a predictive biomarker useful for stratifying patients with NSCLC who are receiving PD-1/PD-L1 therapeutic agents [37]. In the present study, we investigated the relationship between PD-L1 expression and clinicopathological factors. Our results showed that PD-L1 positivity was more frequent in patients with moderately or poorly differentiated disease than in patients with well-differentiated disease, suggesting that PD-L1 expression can serve as a marker of disease progression. These patients may benefit more from PD-1/PD-L1 immune checkpoints inhibitors than other patients. In addition, several studies have described the feasibility of performing immuno-PET imaging with radiolabelled PD-1 and PD-L1 antibodies in murine models [38–39]. The present study investigated whether the SUVmax can predict tumour tissue PD-L1 expression levels in patients with SCC. We observed an association between SUVmax and PD-L1 expression. Our findings suggest that FDG-PET may serve as a noninvasive tool for assessing PD-L1 expression and can therefore predict the benefits that may be derived from PD-1/PD-L1 pathway-targeted immunotherapy.

The present study had several limitations. First, the samples and data described herein were collected retrospectively, which may have led to bias resulting from variations among the treatment protocols used to manage the patients in question. Second, the limited sample size of the study cohort may have reduced the statistical power of the data analysis. Third, specific cut-off values for PD-L1 positivity have not been clearly defined, and the reproducibility of results associated with specific PD-L1 cut-off values has not been formally assessed. Fourth, different studies used different antibodies, and the choice of antibody may influenced the results of studies. In the present study, we used the clone 28-8 antibody, which has been used in clinical trials regarding nivolumab. Different anti-PD-L1 antibodies may need to be validated in the same SCC sample in future studies. Fifth, the patients included in our study had stage I-III disease; therefore, it is unclear whether our results are applicable to patients with stage IV disease. A prospective study with a larger sample size is warranted to validate our findings.

Ninety-five patients with known diagnoses of SCC underwent whole-body 18F-FDG PET/CT for initial disease staging before undergoing surgical resection with systematic lymph node dissection at Harbin Medical University Cancer Hospital from January 2010 to December 2013. Archival materials including patient demographics, clinical data and follow-up information were available for all patients. Data on patient demographics, clinicopathological features and overall survival were extracted from medical records. Five patients who received preoperative chemotherapy or radiotherapy were excluded from the study, as were six patients who were examined at our PET/CT center more than 4 weeks before undergoing surgical treatment. Thus, 84 patients were included in the study. Tumour stage was determined according to the seventh edition of the AJCC system, which was published in 2009. The study was approved by the Ethics Committee of Harbin Medical University Cancer Hospital.

The FDG-PET protocol used in this study was described in our previous report [40]. In this study, the output results, including the SUVmax, were assessed by two imaging physicians with experience with PET/CT imaging and familiarity with PET-VCAR software and our PACS system. All images were reviewed to localize the target lesions identified by the above two imaging physicians, and any discrepancies regarding the images were resolved by discussion and the achievement of consensus.

IHC was performed using standard indirect immunoperoxidase procedures. Briefly, 4μm-thick sections from a paraffin-embedded tissue block were de-waxed with xylene and rehydrated with a graded ethanol series and distilled water. Endogenous peroxidase activity was subsequently blocked using 3.0% hydrogen peroxide for 10 minutes, after which the tissue sections were incubated with the indicated primary antibodies (anti-PD-L1 antibody, clone 28-8, Abcam, Cambridge, UK) for 60 minutes at room temperature. For antigen visualization, we immersed the sectionsin 3, 3-diaminobenzidine solution and counterstained them with hematoxylin.

This study was supported by grants from the National Natural Science Foundation of China (81372907), Health and Family Planning commission of Heilongjiang Province (2016-102 and 2013-068), innovation fund of Harbin Medical University (YJSCX-50HYD).