Correlation between estrogen receptor expression and prognosis in epithelial ovarian cancer: a meta-analysis

Methods: A systematic search was performed in PUBMED, EMBASE, and COCHRANE databases to identify relevant studies up to December 2016. The pooled hazard rates (HR) with 95% confidence intervals (CIs) for overall survival and time to tumor progression were calculated and then weighted and pooled in this meta-analysis with a random-effect model.

Ovarian cancer is the second most common and leading lethal gynecological cancer [1]. About 90% of these subtypes are epithelial ovarian cancer (EOC). In the United States, approximately 22,440 new cases and 14,080 deaths from ovarian cancer were estimated in 2017 [1]. Despite considerable efforts have been made to improve surgical techniques and meticulously designed chemotherapy regimens, the 5-year survival rate remains 10% ~ 30% [2–4]. The high rate of lethality and poor rate of survival are primarily due to late detection and rapid progression [2–4]. For these reasons, identifying reliable predictive biomarkers for prognosis and developing novel therapeutic strategies are urgently needed.

Estrogen and estrogen receptor (ER) have been well documented to be associated with ovarian cancer [5]. Estrogens promote physiological actions, such as cell survival and proliferation, after binding to their estrogen receptors (ERs) subtypes (ER α and ER β) [6]. The frequency of ER expression in human epithelial ovarian carcinoma has been reported varying in the range of 43%~81% immunohistochemically [7, 8]. In ER-positive human ovarian cancers, estrogen promoted cancer cell growth in vitro [9]. Conversely, anti-estrogens inhibited cell growth both in vitro and in vivo [10].

In this study, we performed a meta-analysis to evaluate the prognostic value of ER and its two subtypes (ER α and ER β) in patients with epithelial ovarian cancer, aiming to provide more strategies for follow-up and targeted regimens.

Initially, 726 relevant citations were retrieved in PUBMED, EMBASE, and COCHRANE databases. After reviewing titles and abstracts, 464 studies were eliminated for clearly irrelevant. Among the remaining 262 studies, 6 studies were further excluded because they were not written in English; 136 articles were excluded because of conference abstracts or other studies; 46 studies were irrelevant to ovarian cancer and prognosis; 39 studies were excluded due to insufficient data for quantitative analysis. Ultimately, 35 studies [3–8, 11–39] with a total of 5824 patients were included in this meta-analysis. Details of the study selection process were presented in Figure 1. 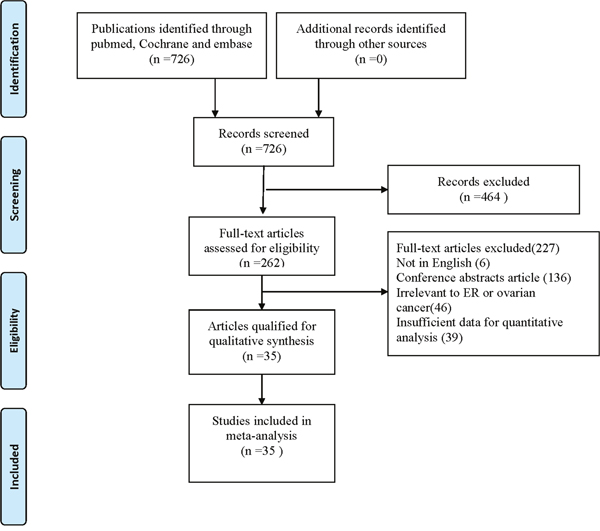 As for the region, 19 studies were performed in Europe, 7 studies in North America, 5 studies in Asia, 2 studies in South America, 1 study in Oceania, and 1 study was conducted across regions. With respect to detection method, 20 studies used immunohistochemical staining for estrogen receptor assessment, 2 studies used polymerase chain reaction, and the other 4 studies used dextran-coated charcoal method.

The quality of included studies was assessed by the Newcastle-Ottawa Scale (NOS) and the scores of all studies were more than six, suggesting a high methodological quality across all studies. Detailed characteristics of eligible studies were presented in Table 1.

Quality assessment of relationship between ER expression and OS

A total of 35 studies were included to evaluate the association between ER expression and OS of epithelial ovarian cancer. The pooled data of 35 datasets showed that ER expression was significantly associated with an improved OS of epithelial ovarian cancer (HR = 0.86, 95% CI = 0.76-0.97). A moderate heterogeneity was observed (I2 = 70.2%, P = 0.00), therefore a random-effect model was used to calculate the pooled HR and 95% CI (Figure 2). Moreover, according to various confounding factors, subgroup analysis was performed to explore the potential source of the heterogeneity among these studies (Figure 3, Table 2). 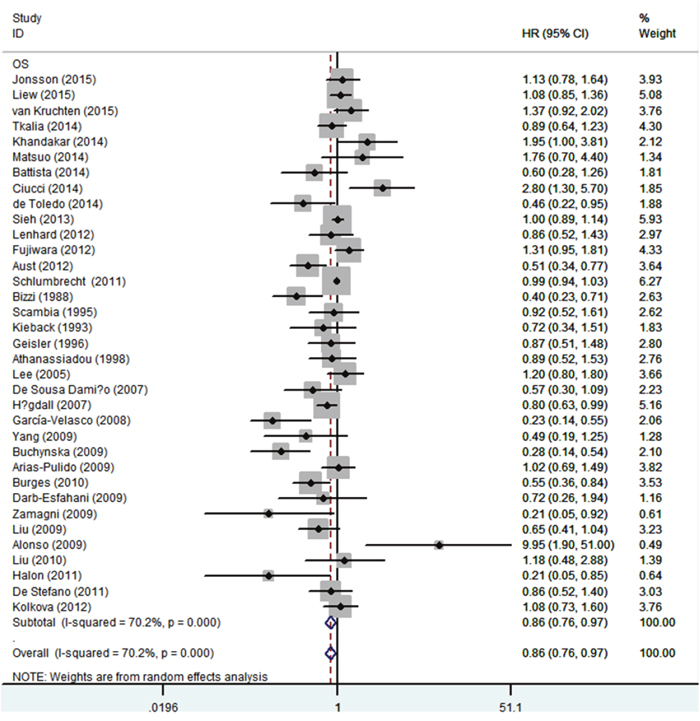 Figure 2: Forest plot of HR and 95% CI in the meta-analysis of the association between estrogen receptor expression and overall survival of ovarian cancer patients. Summary of 35 studies, the results showed estrogen receptor was associated with a favorable overall survival of ovarian cancer using random effects model. The % weight was computed automatically by the Stata software. 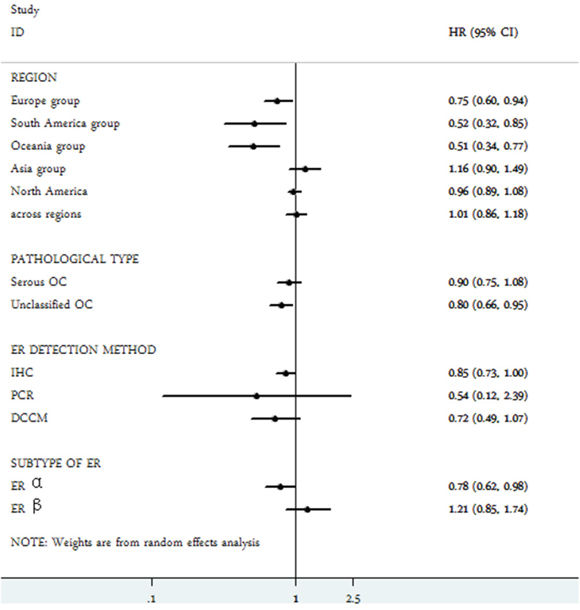 Figure 3: Subgroup analysis of the association between estrogen receptor expression and overall survival of ovarian cancer.

Table 2: Subgroup analysis of the association between estrogen receptor expression and overall survival of ovarian cancer

Quality assessment of relationship between ER expression and TTP 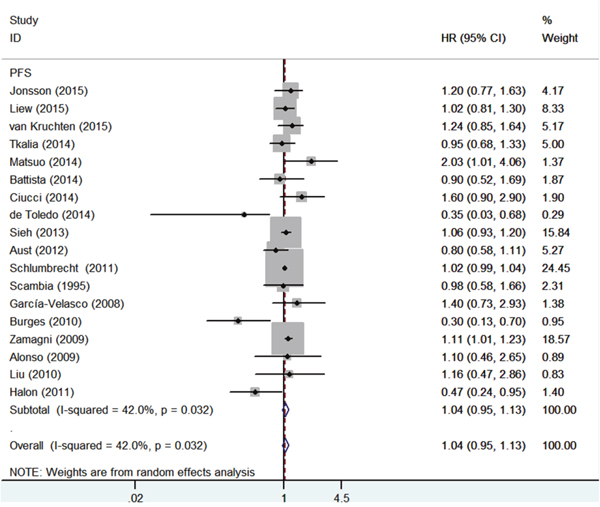 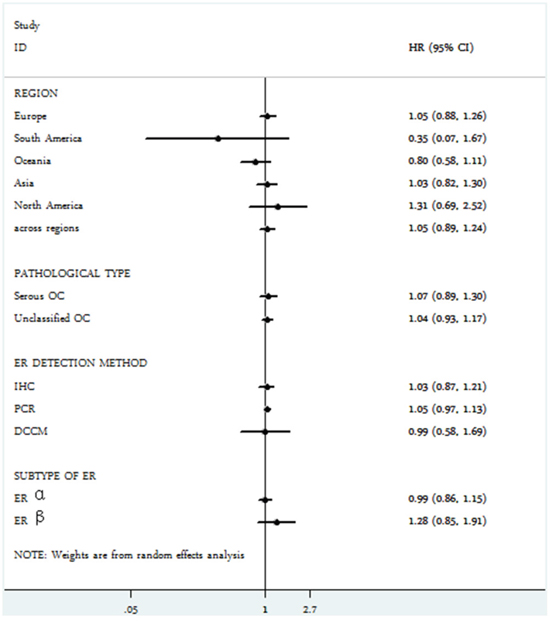 Figure 5: Subgroup analysis of the association between estrogen receptor expression and time to tumor progression of ovarian cancer.

We further performed subgroup meta-analysis according to different regions, pathological types, ER detection methods, as expected, ER had no association with TTP of ovarian cancer in all subgroups (Figure 5, Table 3).

Table 3: Subgroup analysis of the association between estrogen receptor expression and time to tumor progression of ovarian cancer

Funnel plots analyses were graphically symmetric, as indicated by Begg’s test, there was no significant publication bias for both OS (Begg’s test, P =0.173) and TTP (Begg’s test, P = 0.649) among the included studies. (Figure 6).

With respect to source regions, ER expression was correlated with better clinical outcomes of epithelial ovarian patients in European group, South American group and Oceanian group but not in other groups. A probable explanation for these results is that certain genes exert different effects on cancer risk and prognosis across ethnic populations. It is well known that tumor estrogen receptor state differs by race in breast cancer. The proportion of ER-positive tumors was much higher among Non-Hispanic Whites population comparing to Non-Hispanic Black population [42].

Additionally, we studied deeply on the way of ER detection methods. We observed that a positive ER status was generally associated with an improved OS in epithelial ovarian cancer using IHC. Immunohistochemical examination of ER status has been used as a standard-of-care pathological evaluation to guide adjuvant endocrine therapy after surgery of breast cancer [43]. It is the main technology used to determine protein expression status in tissue and has been widely used in the morphological diagnosis of malignancy and contributes to decisions on prognosis. According to our results, we suggested that using immunohistochemistry to evaluate ER expression in postoperative ovarian cancer samples routinely may benefit the prognosis of epithelial ovarian cancer.

Estrogens exert their action through two estrogen receptors (ER α and ER β) [6]. ER α was a well-established biomarker predicting better outcomes in women with breast cancer in Han et al’s study [43]. Consistent with breast cancer, our study demonstrated that ER α predicted a favorable prognosis for ovarian cancer patients. Nevertheless, the expression of ER β was irrelevant with both OS and DFS/RFS/PFS of ovarian cancer patients. A potential mechanism responsible for these findings may be the distinct function of ERs subtypes in the carcinogenesis of the ovary. ER β receptor displays a high expression compared to ER α in normal ovarian epithelium, but this ratio is reversed in ovarian cancers [44].

Some limitations also existed in this analysis. First, we could only extract summarized population-level data rather than individual patient-level data from the literature. Second, the HR of some studies was indirectly extracted from growth curve, which was less reliable than the data directly obtained from primary literatures. In addition, the heterogeneity across studies could not be eliminated completely, which could result in bias of the outcome. Finally, small studies with negative or null results may not be published, which can cause publication bias. Therefore, further investigations are needed to address the above limitations.

In conclusion, this meta-analysis demonstrates that the expression of ER, especially ER α, is associated with an improved OS, which suggests that ER might be a potential biomarker for prognostic prediction in epithelial ovarian cancer. Additionally, evaluating ER expression by immunohistochemistry in ovarian cancer paraffin is an economical and effective method for predicting ovarian cancer clinical outcomes.

An electronic search of the following databases for relevant studies was performed: PUBMED, EMBASE, and COCHRANE. The research started from November 1980 to December 2016. The search items included “Estrogen receptor” or ER and “Ovarian Neoplasms” or “Ovarian Neoplasm” or “Ovary Neoplasms” or “Ovary Neoplasm” or “Ovary Cancer” or “Ovary Cancers” or “Ovarian Cancer” or “Ovarian Cancers” or “Cancer of Ovary” or “Cancer of the Ovary” and “Prognosis or prognostic or Survival or outcome”. The search was limited to English language articles, but no limitation on regions of publications. Reference lists of all relevant articles were manually screened to ensure the accuracy of the literature search.

Exclusion criteria were as follows: (1) review articles, experimental studies, letters, comments, meta-analysis, conference articles or case reports; (2) non-English studies; (3) absence of key information such as hazards ratio (HR), 95% confidence interval (CI) and sample size. Two independent reviewers (ZJS and HL) evaluated eligibility of studies according to the above criteria. The information collected would be repeatedly examined by each other. Disagreements were resolved by discussion.

The Newcastle-Ottawa quality assessment tool was used to estimate the quality of the included studies [45]. We allocated a score of 0-9 to each included article, and those with a score ≥ 6 were considered to be of high quality.

In most cases, we directly extracted HR and 95% CI from primary studies. If the studies showed inadequate or unclear information, sending an email to the authors for complementary information was our first choice. If the Kaplan-Meier survival curves were available, we used the method as previously described to estimate HR and its corresponding 95% CI [40]. For multiple publications reporting the same study, only the most informative or most recent publication was included in the meta-analysis.

Pooled hazard rate (HR) with its 95% confidential interval (CI) were calculated to measure the prognostic value of ER expression among ovarian cancer patients. Heterogeneity among studies was quantified and assessed using the chi-squared-based Q and I2 test and substantial heterogeneity was defined as a P-value <0.10. A random-effect model (Der Simonian and Laird method) was used if heterogeneity was observed P<0.10, otherwise, the fixed-effect model was used (Mantel-Haenszel method) [46, 47]. Potential publication bias was examined by performing funnel plots qualitatively, and estimated by Begg’s test quantitatively [48, 49]. Sensitivity analyses were employed to find potential origins of heterogeneity and to examine the influence of various exclusions on the combined HR [40]. All analyses were performed using Stata 12.0 software (StataCorp LP, College Station, TX). A P-value <0.05 was considered statistically significant.

This work was supported by grants from Key Lab of Wenzhou city-Gynecological Oncology.

45. Stang A. Critical evaluation of the Newcastle-Ottawa scale for the assessment of the quality of nonrandomized studies in meta-analyses. Eur J Epidemiol. 2010; 25:603-605.