Breast cancer is the most common malignant tumor in women around the world, comprising 25% of all cancer cases in women [1]. Because of its high morbidity, breast cancer seriously affects women’s health and life quality. At present, surgical resection is the main treatment strategy for patients with breast cancer. Adjuvant chemotherapy, endocrine therapy, radiation therapy, targeted therapy and other comprehensive treatments have also significantly improved disease free survival and overall survival. However, postoperative recurrence and metastasis are still big problems plagued the clinicians and patients. Thus, there is an urgent need to establish effective models for evaluating prognosis of breast cancer.

The Nottingham Prognostic Index (NPI) established in 1982 is a widely used clinicopathological score system for primary breast cancer prognostication [2]. The NPI combines nodal status, tumor size and histological grade in a simple formula. It stratifies breast cancer patients into three prognostic groups: good, moderate and poor [3]. The NPI could guide individualized therapeutic decision for breast cancer by providing risk stratification. Its advantages of prognosis stratification have been confirmed by various studies, and it has been widely used in clinical practice [4–6]. However, the NPI does not address biological and molecular characteristics of breast cancer.

In recent years, prognostic significance of gene expression has become the research hotspot. For example, the 21-gene recurrence score, 70-gene signature and TP53 mutation-correlated genes were verified to have prognostic value in different breast cancer populations [7–9]. However, the expensive cost of the multi-gene assays and the lack of verifiable trials prohibit them for clinical application in many countries [10]. So the experts propose utilizing routinely pathological parameters to replace gene detection in clinical practice. In 2013, the St Gallen Consensus Conference and ESMO Clinical Practice Guidelines recommended surrogate definitions of intrinsic molecular subtypes of breast cancer [11]. According to the expression of estrogen receptor (ER), progesterone receptor (PR), human epidermal growth factor receptor 2

(HER2) expression/amplification and Ki67, breast cancer is classified into four molecular subtypes including luminal A, luminal B, HER2 overexpression and the basal-like subtype. Endocrine therapy is generally effective for patients with the luminal A subtype, and this type shows the best outcome [12]. Luminal B subtype, determined by the status of Ki67 and HER2, appear obvious distinction from luminal A [13, 14]. Luminal B shows poorer prognosis compared with luminal A [15, 16]. Whereas, HER2 overexpression subtype and basal-like subtype are associated with a higher risk of recurrence and present the worse outcome [17–20].

In this study, we evaluated the correlation and inherent links between the molecular subtypes and NPI in breast cancer, with the aim to further understand and find the best prediction model in breast cancer. We also analyze the relationships among the sub-factors in two models.

Correlation analysis of different variables between molecular subtypes and NPI 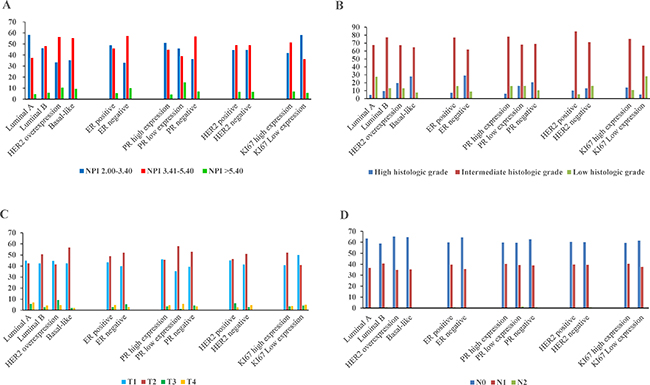 Cross analysis of HER2 status and NPI

In the retrospective study, our results showed that HER2 status was closely related to the histological grade. The percentage of cases with low histological grade in the HER2+ group was significant lower than that in the HER2- group. However, there were no significant distribution differences of NPI, tumor size and lymph nodes staging between HER2+ and HER2- groups. (Table 5 and Figure 1)

Table 5: Relationship between HER2 status and Nottingham Prognostic Index (NPI)

All clinicopathplogical data could be obtained from Supplementary Tables 1–3.

Breast cancer is classified into four molecular subtypes according to the expression of ER, PR, HER2 and Ki67. Molecular subtypes as new prognostic indicators have been received more and more attention. In these molecular subtypes, Luminal A subtype shows the best outcome, whereas, HER2 overexpression and basal-like subtypes present the poorer outcome [15–20]. Breast cancer patients with the same clinical prognostic profile may have markedly different outcomes, which are concrete manifestations of distinct molecular biology behavior [21]. Traditional clinicopathological parameters including positive margin, vascular tumor invasion, histological grade, lymph node staging and tumor size have been verified as independent risk factors for recurrence [22–27]. NPI combines the number of involved lymph nodes, tumor size and histological grade to determine prognosis, it is a well-established clinicopathological score system which offers comprehensive prognostic information than single marker [28, 29]. The markers involving in molecular subtypes and NPI are completely different, however, both are used to guide treatment and predict prognosis. Whether the novelty molecular subtypes could completely substitute the traditional clinicopathological prognostic markers is a question worthy of consideration, and whether traditional NPI provide more detailed stratification in every molecular subtypes is another question worthy of in-depth research. However, the correlation and inherent link between the molecular subtypes and NPI have rarely been reported. The in-depth understanding of the association between the two classifications will help us to choose the precise prognostic markers in clinical practice.

Specimens that display a basal-like cell phenotype features are also called, in routine practice, as triple negative breast cancer (TNBC). It represents an easily recognizable breast cancer group with aggressive behavior [30]. TNBC are shown to have an attenuated relationship between tumor size, nodal status, and survival. It is currently accepted that TNBC is more prone to haematogenous metastasis rather than lymph node metastasis [31]. Since lymph nodal is a major component for NPI calculation, there are concerns about the reliability of using NPI as a tool for TNBC prognostication. However, Dent R reported a higher prevalence of lymph node metastasis in TNBC [32], and Albergaria A had demonstrated that TNBC disseminated to axillary lymph nodes as frequently as other subtypes, it had the ability to predict the survival of TNBC, and NPI was a truthful prognostic tool in TNBC [6]. In our study, the proportion of N1+N2 in basal-like subtype was almost the same as that in other subtypes.

Tumor size is another major component of NPI. Generally speaking, it is independent risk factor for recurrence [27]. In our study, the percents of T2 were significant higher than percentages of T1 in basal-like subtype group, ER negative group, PR negative/low expression group. However, the same trend was not observed in HER2 over expression group and HER2 positive group. One study reported that there was an increased tumor size for the ER-/PR-/HER2+ and ER-/PR-/HER2- subtypes, however, Foulkes WD proposed that basal-like breast cancers and HER2 positive breast cancer were inherently aggressive and were likely to early metastasize, tumor size might not be related to the prognosis [33, 34]. Cheang MC put forward that the special type (ER−/PR−/HER2−/cytokeratin 5+ and/or EGFR+) of basal-like breast cancers might have cancer stem-like properties and the strong tendency to metastasize early [35]. These maybe lead to some conflict results about tumor size and outcome in the breast cancers.

In conclusion, there is closely association between molecular subtypes and NPI in breast cancer. For further comparing the prognostic significance of molecular subtypes and NPI, survival analyses should be performed on the same population in a large-scale prospective study. Moreover, it is necessary to evaluate the prognostic significance of NPI in different molecular subgroups or the additional value of intrinsic molecular classification to different NPI score. Different prognostic models have their one-sidedness, and the comprehensive analysis will better guide the clinician to judge the prognosis.

During the period between January 2008 and December 2012, a total of 1,042 patients with operable breast cancer were enrolled in the study, and average age ± standard deviation was 55.56 ± 12.37 years (range, 22 to 92 years). All patients were either from the Department of Breast Surgery or Department of Oncology. Biopsies or surgical resection specimens were pathologically examined and histologically confirmed. Complete pathological records were available, and the following details were recorded: tumor size (T), the number of positive lymph nodes (N), histological tumor grade (G), histopathological type, ER, PR, Ki67 and HER2 status. All patients were not treated with radiation before operation. The patients with the history of other malignant disease and recurrent malignancies were excluded. Patients who had neoadjuvant chemotherapy were not excluded because the NPI retained its prognostic value after this form of treatment [36]. The research was reviewed and approved by the Ethics Committee of Beijing Friendship Hospital in China. All procedures performed in the study involving human participants were in accordance with the ethical standards of the Beijing Friendship Hospital, Capital Medical University and/or national research committee and with the 1964 Helsinki declaration and its later amendments or comparable ethical standards. Before collecting human samples, all participants signed informed consent forms according to our institutional guidelines.

Four molecular subtypes (luminal A, luminal B, HER2-overexpression and basal-like) were classified. Table 7 was surrogate definitions of molecular subtypes of breast cancer according to the 2013 St Gallen Consensus Conference and ESMO Clinical Practice Guidelines.

All analysis was performed using the SPSS 13.0 software (SPSS Inc., Chicago, Illinois, USA). The categorical variables were described using numbers and percentage. The correlation analysis of the categorical variables was analyzed by Spearman correlation analysis. The relationships between molecular subtypes and NPI were evaluated using Chi-square test. A two sided P value less than 0.05 was considered to be statistically significant.

Qin Li contributed to the design of the study. Hongchao Zhen, Liuting Yang and Junxian Yu collected the clinical and pathological data. Li Li and Lei Zhao were responsible for the statistical analysis. Hongchao Zhen wrote the main manuscript and prepared tables. All authors contributed to the review, edited and approved of the paper. All authors agreed to be accountable for the content of this paper.