The prevalence of differentiated thyroid carcinoma (DTC) in children is increasing. However, the clinical features and recurrence of DTC in children in different age groups, especially those less than 14 years old, are not well studied. We retrospectively investigated 73 children diagnosed with DTC in our hospital between January 1998 and July 2014. Data were reviewed for different age groups based on the age at initial diagnosis: 5-9, 10-14, or 15-19 years. The mean age of the recurrence group (10.6±4.1 years) was lower than that of the non-recurrence group (12.6±6.2 years; P=0.004). The main symptom at initial diagnosis was local invasion in the recurrence group, but was thyroid nodules in the non-recurrence group (P<0.001). The recurrence and non-recurrence groups did not differ in TNM stage or risk level. However, according to our age classification, the American Thyroid Association pediatric risk level was significantly different in three age groups (P=0.024). The DTC recurrence rate in each age group decreased as the age of the children increased (P=0.011). Thus, a high risk of recurrence and a high proportion of local invasion cases were observed in the youngest age group, suggesting that younger age is an important risk factor for DTC recurrence in children.

The proportion of newly diagnosed differentiated thyroid carcinoma (DTC) cases is increasing among individuals under the age of 20 [1–3]. The symptoms of DTC in children are not usually typical upon initial diagnosis; while DTC may present as a neck mass (with or without a thyroid lesion) in some children, in others, DTC may not even be diagnosed until the discovery of distant metastases. Children with DTC have a high degree of extrathyroid extension and high rates of distant metastasis and recurrence [4–6]; nonetheless, the prognosis for these patients is usually good, and disease-specific death rarely occurs [7–9].

A more aggressive presentation and higher distant metastasis rate have been observed in pre-pubertal children than in adolescents with DTC [5]. However, previous studies of DTC have included considerable proportions of adolescents [1, 10–13]. The clinical features of children with DTC, especially children less than 10 years old, are still not well understood. Indeed, according to 2015 guidelines, the specific circumstances of each age group of DTC patients have not yet been explained in detail, especially for younger age groups [14].

Thus, in the present study, 73 children with DTC treated in our hospital were retrospectively evaluated by age group. The same diagnostic and therapeutic techniques were employed for all subjects. We compared the age groups in terms of their clinical presentation, TNM stage, risk level of recurrence, and other characteristics.

Table 1: Characteristics of children in the recurrence and non-recurrence groups

Table 2: Differences in TNM staging and risk level among the age groups of children with DTC

The ratios of males to females in the three groups were 12:9, 5:11, and 6:30, respectively, revealing that the proportion of males was highest in the youngest group. Initial thyroid nodule symptoms were more common in the oldest group of children with DTC (P=0.044), while in the younger age groups (5-9 years and 10-14 years), cervical masses were often found during routine physical examinations. The 5-9-year-old children with DTC often presented with local invasion (8 cases, 38.1%), including that of the muscle, recurrent laryngeal nerve and trachea, although the local invasion rate did not differ significantly among the groups. The tumor sizes and pathological types were similar across the age groups.

The age groups did not differ significantly in terms of surgical procedure, postoperative complications, postoperative I131 proportion, L-thyroxine therapy, or lung metastasis. The recurrence-free survival times of the three groups did not differ significantly (Figure 1). During the follow-up period, no deaths were observed after surgery and I131 therapy, though cases of lung metastasis were recorded. 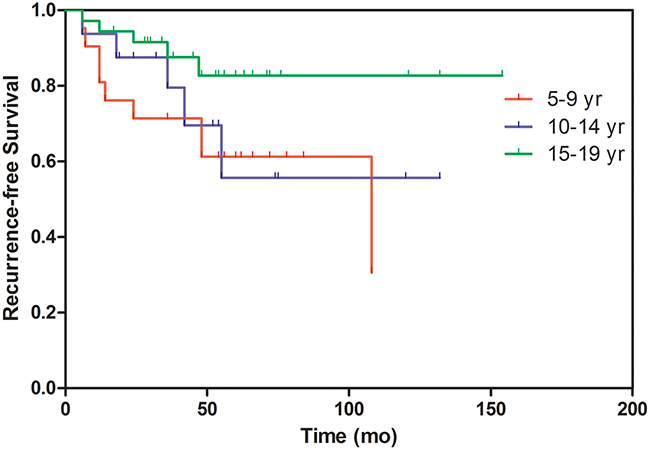 Differences in tumor manifestation, neck recurrence and lung metastasis have been established between children and adults with DTC [15, 16], and differences have also been reported between pre-pubertal children and adolescents with DTC [5, 17]. Considering the increasing incidence of DTC in children in recent years, we analyzed the clinical features of children who had experienced DTC recurrence, and focused on the trends in age groups of five-year intervals.

When we performed TNM staging and risk stratification according to the 2015 American Joint Committee on Cancer recommendations [19], we did not observe significant differences between the recurrence and non-recurrence groups in TNM stage or risk level. The total percentage of T1a, T1b, and T2 tumors was greater than 50%, and the percentage of N0 tumors was close to 50% in non-recurrence group. The low-risk level accounted for nearly 40% of children in both the recurrence and non-recurrence groups (Table 1), which suggests that nearly half of the recurrent cases were low-risk when they were initially diagnosed. Thus, in the present study, the ATA-recommended risk factors examined during the initial diagnosis did not appear to be sufficient to predict the risk of recurrence. Further research should focus on identifying new strategies for assessing recurrence risk.

In the 15-19-year-old adolescent group, the majority of patients were diagnosed with thyroid nodules (24 cases, 68.8%), whereas in younger children with DTC (5-9- and 10-14-year-olds), the majority of patients were diagnosed with cervical masses (66.7% and 68.8%, respectively). The rate of local invasion of the striated muscle and recurrent laryngeal nerve was higher in the 5-9-year-old group than in the other age groups, although the difference was not significant (p=0.091); thus, the proportion of high-risk cases was greater in this group (P=0.024) (Table 2). Such age-related clinical manifestations may be due to age-specific metabolism and genetic factors in younger children with DTC, and may contribute to the lack of complaints and delayed findings in younger children [4, 20]. These findings suggest that more aggressive tumors occur in younger children [21, 22]. Thus, we conclude that a younger age is an important risk factor for DTC recurrence in children [5, 23, 24].

Recurrence was not observed for the recurrent cases after reoperation to remove the residual thyroid and/or neck recurrences. For preoperative and postoperative pulmonary metastases, lung metastatic lesions were well-controlled after surgical resection of the lesions and isotope therapy. Although the incidences of local invasion and recurrence were higher in younger children than in older children with DTC, the survival rate was 100% after our surgical strategy and combined I131 and L-thyroxine treatment in all age groups. During the follow-up period, we did not observe adverse effects of these treatments on the growth and development of these children. This finding was consistent with previously reported results that, despite the serious clinical manifestations of DTC in children, the survival rate in the follow-up period was satisfactory after surgery and I131 and L-thyroxine treatment [11, 25, 26, 27].

In conclusion, younger children with DTC and those with local invasion as an initial symptom were prone to tumor recurrence. Nearly half of the recurrent cases were low-risk when they were initially diagnosed; therefore, follow-up investigations for low-risk children are still necessary. A high proportion of local invasion cases and a high risk of recurrence were observed in the youngest age group; thus, local invasion and younger age represent important risk factors for DTC recurrence in children. Appropriate treatment strategies should be adopted to increase the awareness and follow-up analysis of the risk of DTC in young children.

This paper presents a retrospective study of 73 children diagnosed with DTC in our hospital between January 1998 and July 2014. These children were diagnosed and treated by a multidisciplinary team (pediatric otolaryngology head and neck surgeons, pediatric endocrinologists, and nuclear medicine physicians). Data were collected from all patients, including the initial symptoms, TNM stage, risk level, therapy, course, and follow-up results. According to their age at initial diagnosis, the patients were divided into three age groups: the 5-9-year-old group, 10-14-year-old group, and 15-19-year-old group.

After ultrasound or fine-needle aspiration, the patients underwent unilateral or bilateral primary surgical resection according to the location of the thyroid lesion. For unilateral DTC, the thyroid gland was unilaterally resected and the ipsilateral level VI lymph node was dissected. Bilateral lobectomy resection was performed for any patient who presented with lymph node metastasis or a local invasion of the capsule, muscle layer, nerve or trachea. For bilateral DTC, bilateral lobectomy and bilateral level VI lymph node dissection were performed. Lateral neck lymph node dissection was performed for neck lymph node lesions. For patients with preoperative and postoperative distant metastases, a series of treatments was considered, including surgery and combined I131 and L-thyroxine treatment.

For ultrasound- or fine-needle-aspiration-confirmed thyroid and lymph node recurrence, the appropriate operation was performed according to the range of recurrent lesions, including the removal of the residual thyroid and selective neck dissection. I131, thyroid-stimulating hormone and a suppressive dose of L-thyroxine were administered after reoperation.

Data were collected on postoperative complications, including hoarseness and low calcium. Postoperative I131 was used for residual thyroid and distant metastases, and a thyroid-stimulating-hormone-suppressive dose of L-thyroxine was used after surgery. Follow-up investigations were performed every three to six months, including repeat thyroid and cervical ultrasonography, chest X-ray examination and thyroid function tests. For patients appearing to be in remission who presented negative diagnostic whole-body scans, chest X-rays and ultrasounds, and low or normal ranges of serologic thyroglobulin, the repeated inspection interval was extended to every two years.

The data were statistically analyzed with SPSS software (version. 19.0, SPSS, Chicago, Illinois, USA). All data in each group were analyzed for normality with the Shapiro-Wilk test. The ages and tumor diameters of the recurrence and non-recurrence groups were compared by the Mann-Whitney test. The other parameters were compared between the two groups with a chi-square test. After the patients were divided according to five-year age intervals, the ages among the three groups were statistically compared by one-way analysis of variance followed by Fisher’s Least Significant Difference test, while tumor size was analyzed by the Kruskal-Wallis test, and other parameters were analyzed with the chi-square test. Spearman correlation coefficient tests were used to determine the correlation between the ATA pediatric risk levels and age groups. The recurrence-free survival for each age group was statistically evaluated by the Kaplan-Meier method. The significance level was set at P<0.05.