Purpose: The present study aimed to evaluate the clinicopathologic characteristics of patients with extranodal extension (ENE) and the prognostic implications of ENE in stage III colorectal cancer (CRC).

Results: ENE was more frequent in younger patients and those with rectal cancer, higher T stage, higher N stage, lymphovascular invasion (LVI), and perineural invasion (PNI). Five-year disease-free survival (DFS) and overall survival (OS) were lower in patients with ENE-positive than in those with ENE-negative tumors (DFS, 66.4% vs. 80.1%; and OS, 74.8% vs. 85.6%, respectively; P < 0.001 both). In multivariate analysis, pathologic stage, the presence of ENE, LVI, PNI, and no adjuvant chemotherapy were significant independent prognostic factors for DFS and OS. There were no statistically significant differences in DFS and OS between ENE-positive stage IIIB tumors and ENE-negative stage IIIC tumors.

Materials and Methods: The records of 1,948 stage III CRC patients who underwent curative surgery between January 2003 and December 2010 were retrospectively reviewed.

Conclusions: The presence of ENE is independently and significantly associated with lower DFS and OS rates after curative resection for stage III CRC. ENE status should be considered in both the pathologic report and CRC staging system.

Since 1987, the American Joint Committee on Cancer (AJCC) and the Union for International Cancer Control (UICC) have promoted a worldwide taxonomy of cancer staging based on the tumor-node-metastasis (TNM) staging system. Traditional TNM staging strategies for colorectal cancer (CRC) place patients with mesenteric lymph node involvement into the stage III category. A tumor nodule in the pericolonic fat without histologic evidence of residual lymph node tissue is classified as a tumor deposit. Previously, it was not considered a positive lymph node [1]. However, in the absence of unequivocal lymph node metastases, tumor deposits are considered N1 (particularly N1c) according to the AJCC 7th edition [2].

The presence of extranodal extension (ENE) of metastatic lymph nodes recently emerged as an important prognostic factor in several types of malignancies [9–15]. However, the prognostic value of ENE in CRC has not been reported extensively, and few studies are based on a reliable number of patients.

In the present study, we evaluated the clinicopathologic significance of ENE and investigated its prognostic implications in stage III CRC.

Clinicopathologic characteristics according to ENE status

There were no significant differences in sex, s-CEA level, and histologic type between ENE-positive and ENE-negative patients. However, ENE was more frequent in younger patients and those with rectal cancer, a higher T stage, a higher N stage, lymphovascular invasion (LVI), or perineural invasion (PNI) (Table 1). 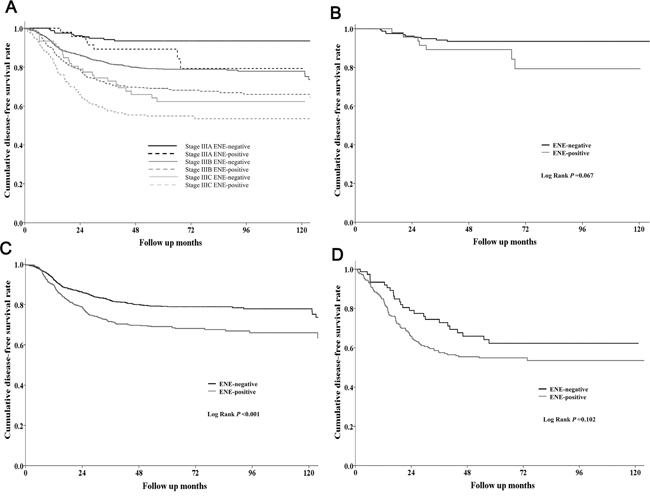 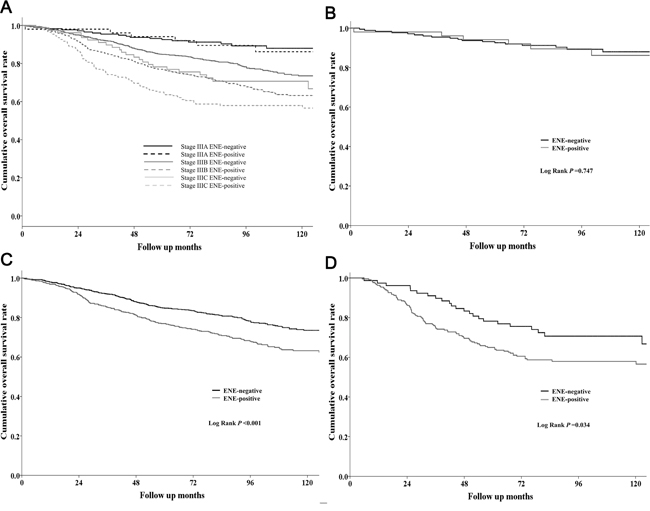 Comparison of survival according to stage and ENE status

In the present study, the ENE rate was 43.8% for all stage III CRCs. Tumor stage was positively related to the incidence of ENE (22.5% in stage IIIA tumors, 41.1% in stage IIIB, and 73.5% in stage IIIC). ENE was also associated with young age, rectal cancer, advanced T and N stages, and LVI/PNI. In a meta-analysis by Veronese et al. [16], the ENE rate was 45.7% for node-positive CRC and ENE was associated with high T stage, high-grade tumors, and advanced tumor stage. The incidence of ENE and the results of our study were consistent with those reported by Veronese et al., strongly suggesting that ENE is closely linked to tumor aggressiveness.

The presence of ENE in metastatic lymph nodes is a negative prognostic factor for cancers of several organs, including stomach [9, 17], esophageal [18], papillary thyroid [10], breast [12], bladder [11], and non-small cell lung [14] cancers. In particular, the presence of ENE in penile cancer [13] and vulvar cancer [15] is also taken into account in the 7th AJCC cancer staging system [2].

The prognostic implication of ENE in CRC was investigated previously, with most studies reporting that ENE-positive status is associated with poor prognosis in CRC [16, 19–23]. In the present study, Kaplan-Meier survival curves showed significant differences in both DFS and OS between ENE-positive and ENE-negative patients. Subgroup analysis indicated that the difference was more significant in stage IIIB cancers. However, there was a tendency towards different survival outcomes between ENE-positive and ENE-negative patients in stage IIIA and IIIC cancers. This result can be attributed to the relatively good prognosis of stage IIIA cancers and the small sample size for stage IIIC cancers. Multivariate analysis also showed that ENE-positive status was a statistically significant independent prognostic factor for poor DFS and OS.

Taking the ENE status into consideration, DFS and OS were compared between stage IIIB and stage IIIC cancers. There were no statistically significant differences in DFS and OS between ENE-positive stage IIIB tumors and ENE-negative stage IIIC tumors. This suggests that the ENE status affects the staging system. Furthermore, the presence of ENE was more than 40% in stage III CRCs. This is another reason for which ENE should be considered by future staging system. The presence of ENE is not a rare condition. In line with the AJCC 7th staging system, it is important to look for free tumor deposits in the subserosa, mesentery, or non-peritonealized pericolic or perirectal tissue [2, 34] in CRC and to assess ENE status in penile and vulvar cancer. The present findings suggest that ENE status in stage III CRC needs to be considered as an important factor in the staging system. In 2017, the AJCC 8th edition [35] was published. However, the 8th edition of AJCC staging manual also does not consider ENE status.

In conclusion, the presence of ENE was closely related to tumor aggressiveness in CRC. ENE was a significant independent prognostic factor for DFS and OS after curative resection for stage III CRC. ENE assessment should be included in histopathological evaluations and ENE status should be considered as part of the staging system for this disease.

The medical records and database of 1,948 CRC patients who underwent surgery at Asan Medical Center, Seoul, Korea, between January, 2003, and December, 2010, were retrospectively reviewed. All patients included in this study met the following criteria: (1) a diagnosis of stage III CRC, (2) histologically proven adenocarcinoma, and (3) history of curative resection (R0). Patients who received preoperative neoadjuvant therapy, those with hereditary CRC (familial adenomatous polyposis and hereditary nonpolyposis colorectal cancer) and those with multiple colorectal cancers were excluded.

The ENE status of all specimens was examined by two pathologists, including a fellow and a faculty pathologist, and the final diagnosis was made on the basis of intradepartmental consultation with staff specialized in CRC. ENE was defined as cancer cells infiltrating the extranodal adipose tissue beyond the capsule of the lymph node (Figure 3A). Tumor cells that were present outside the lymph node and continuous with the primary tumor (Figure 3B) or confined to endolymphatic spaces (Figure 3C) were not considered ENE. In addition, tumor deposits, and clear lymphovascular or perineural invasion were not considered ENE. When lymphovascular invasion was equivocal, elastic staining, or immunohistochemistry for CD31 or D2-40 was generously performed. The tumor was considered ENE-positive when one or more of the metastatic lymph nodes showed ENE. 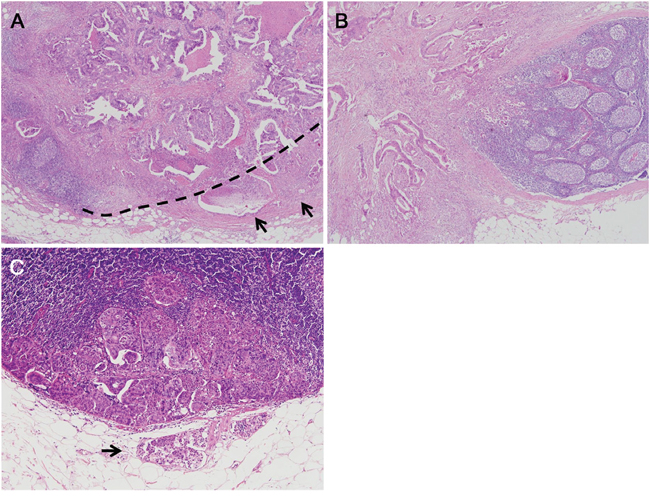 Patients underwent a standardized postoperative follow-up (including clinical examinations, complete blood counts, blood chemistry tests, measurements of s-CEA levels, and chest radiography) every 3 months for the first 2 postoperative years and every 6 months thereafter. Patients also underwent abdominal and pelvic CT scan every 6 months. Colonoscopy was performed within 1 year of surgery and then once every 2–3 years. If recurrence was suspected, patients underwent CT scan, MRI, and/or PET scan. Recurrence was diagnosed pathologically (by surgical resection or biopsy) and/or radiologically.

This work was supported by the grant (to J.C. Kim) from the Korea Research Foundation (2016R1E1A1A02919844), Ministry of Science, ICT, and Future Planning, Republic of Korea.