Selumetinib (AZD6244, ARRY-142886) is a potent, orally active inhibitor of mitogen-activated protein/extracellular signal-regulated kinase (ERK) kinase (MEK)-1/2 that suppresses the pleiotropic output of the RAF/MEK/ERK pathway [1, 2]. The kinase pathway of RAF/MEK/ERK is activated in most human tumors, often through gain-of-function mutations of RAS and RAF family members [3, 4]. In vitro studies demonstrated a tendency toward sensitivity to MEK inhibitors in tumor cell lines harboring KRAS or BRAF mutations [1–3, 5, 6]. Based on this preclinical evidence, several clinical trials have tested or are testing the efficacy of MEK inhibitors in KRAS-mutant lung cancer patients and colorectal cancer [5, 7, 8].

On the other hand, there was no absolute correlation with mutational or phospho-protein markers of BRAF/MEK, RAS, or phosphoinositide 3-kinase (PI3K) activity to MEK inhibitor response in large tumor cell panels of diverse cancer types [2]. An 18-gene signature enabling measurement of MEK functional output independent of tumor genotype has been reported [2]. There have been several studies to show that RAS pathway is activated in the absence of KRAS mutation and the RAS pathway signature is superior to KRAS mutation status for the prediction of response to RAS pathway inhibitor [9].

The aim of this study was to investigate the clinicopathologic and genomic status, especially KRAS status, of gastric cancer (GC) patients according to MEK signature in two Asian cohorts using clinical samples. In this study, we first surveyed the sensitivity to MEK inhibitor in a panel of GC cell lines and correlated with, RAS alteration, MEK signature to MEK inhibitor sensitivity. Next, we analyzed MEK signature via nanostring assay in FFPET (Formalin fixed paraffin embedded tissue) samples from advanced GC patients and then performed a correlative analysis with MEK signature status and KRAS genotype in GC.

MEK signature results according to KRAS status in GC specimens 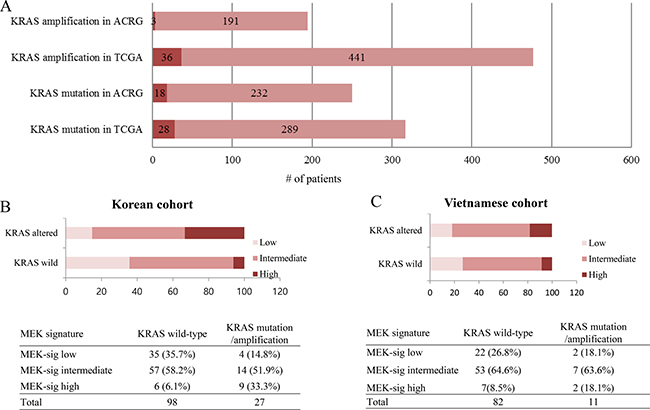 Figure 3: Distribution of MEK signature in Korean cohort according to (A) KRAS mutation or amplification; (B) PIK3CA mutation status.

In the Vietnamese cohort, the proportion of high MEK signature was higher in the KRAS altered group (18.1%) compared to KRAS wild group (8.5%) although there was no statistical significance (P = 0.48) (Figure 2C).

The association of MEK signature with BRAF and PIK3CA status

Table 2 summarizes clinicopathologic characteristics for the Korean cohort according to the MEK signature status. Of note, MEK high signature was more prevalent in well-differentiated and moderately-differentiated tumor type (Table 2). There was a higher percentage of differentiated tumors in the high MEK group (46.7%) compared to the low (12.9%) and intermediate (29.6%) MEK groups (P = 0.034). In addition, there was a higher frequency of intestinal type of Lauren classification (66.7%) in high MEK group compared to low MEK (20.5%) and intermediate MEK group (36.6%) (P = 0.012). There was no significant difference of age, sex and tumor stage. Long-term follow up data (more than 5 years) was available for the patients of the discovery set (n = 38). Disease-related death rate was 37% in low, 61.1% in intermediate, and 66.7% in high group.

Table 2: Clinicopathologic characteristics of Korean GC patients according to the MEK signature

MEK inhibition in combination with chemotherapy has shown beneficial effects in KRAS mutant lung cancer and biliary tract cancer [8, 12]. This strategy could be potentially adapted to GC patients [13]. Therefore, development of a robust diagnostic tool indicative of RAS pathway activity is needed for selection of patients who can benefit from MEK inhibition.

RAF-MEK-ERK pathway has profound effects on proliferative, apoptotic, and differentiation pathways [14]. Mutations occurring in RAF-MEK-ERK pathway can lead to uncontrolled regulation and aberrant signaling [14]. However, the regulation of this pathway is a rather complex process and there are also many tumor suppressor proteins interacting with this pathway such as PTEN, RKIP, PP2A, DUSP5, DUSP6, TSC1, and TSC2 [14]. Expression of activated Ras in gastric chief cells of mice resulted in metaplastic lineage transitions in stomach, which implicated that RAS signaling pathway inhibition may reverse preneoplastic metaplasia in the stomach [15].

Selumetinib (AZD 6244, ARRY-142886) is a potent, orally active inhibitor of mitogen-activated protein/extracellular signal-regulated kinase (ERK) kinase [1]. Previous in vivo and in vitro studies demonstrated a tendency toward sensitivity to selumetinib in tumors harboring KRAS or BRAF mutations compared with those without those mutations [1, 2]. However, a recent study has shown that selumetinib response does not have an absolute correlation with mutational status of BRAF, RAS, or PIK3CA [2].

Although the development and clinical trial of selumetinib has focused on KRAS-mutant non-small-cell lung cancer or BRAF-mutant melanoma, it is not clear that MEK inhibitors are specific for KRAS-mutant cancers [5]. The response rates to MEK inhibitor in clinical trials has varied. A recent study has shown that patients harbouring KRAS G12C or G12V mutations showed better response for selumetinib plus docetaxel compared with other KRAS mutations [16]. On the other hand, of twenty patients who showed response in phase II study of selumetinib in metastatic biliary tract cancers, only two patients had KRAS mutations [12]. Another study also failed to show improvement in objective response rate or progression-free survival with combination therapy of selumetinib and erlotinib over monotherapy in KRAS mutant and KRAS wild-type advanced lung cancer [17].

Clinically, it is important to develop an accurate and robust method indicative of RAS pathway activity to stratify potential patients who can benefit from selumetinib treatment. Previous in vivo and in vitro studies have suggested that gene expression signature would provide a better measure of RAS activity in cancer cells than mutation analysis [9]. In a previous data set, tumors with KRAS mutations had high signature scores [9]. However, a significant number of KRAS wild-type cell lines and tumors exhibited high RAS pathway signature scores, suggesting that these samples have upregulated RAS signaling through another mechanism [9]. In our study, we performed nanostring assays to evaluate pathway-associated gene expression and calculate MEK signature using six genes, DUSP4, DUSP6, ETV4, ETV5, PHLDA1, and SPRY2, in advanced GC patients. Our results showed that KRAS altered tumors have a tendency to have high MEK signature. However, the relationship between MEK signature and KRAS status was not absolute in our study. There is a subset of KRAS wild type GCs which revealed high MEK signature which is in agreement with previous findings that the RAS pathway signature is a high sensitivity but low specificity predictor of KRAS mutation status [9]. PIK3CA is known to mediate resistance to MEK inhibitor [2, 18]. In our cohort, no tumor harboring PIK3CA mutation had high MEK signature. A phase II selumetinib/docetaxel trial is currently ongoing for second-line metastatic GC patients as part of an umbrella trial with patient selection based on high vs low MEK signature or RAS gene alterations (clinicaltrials.gov NCT#02448290).

GC is the second most common cause of cancer-related deaths worldwide, and the prognosis of advanced GC is still poor [19]. To date, only trastuzumab along with chemotherapy showed positive survival outcomes among many targeted therapy trials [13, 20]. One study has reported a potential relationship between KRAS amplification, the activation of KRAS signaling pathway, and cell growth in GC [21]. KRAS mutation was more frequently found in intestinal type, according to the Lauren classification [22, 23]. Our study showed that MEK high signature was more prevalent in well-differentiated and moderately-differentiated tumor type and intestinal type by Lauren classification. In addition to KRAS mutation, MEK1 S72G mutation [24], which activates ERK1/2 and enhances tumorigenicity, has been shown to be hypersensitive to MEK inhibitors in GC. The correlation between MEK signature and MEK1 mutation should be investigated in future studies.

In conclusion, 6.9% of metastatic GC score high for expression of the MEK signature assessed by nanostring assay and have tendency to be enriched for KRAS genomic alterations and intestinal type tumors by Lauren classification. The correlation between MEK signature, KRAS alteration and treatment response to selumetinib should be validated in prospective clinical trials.

MTS was used to determine cell proliferation. Cells were seeded in 96-well plates at a density to allow for logarithmic growth during the 72-hour assay and then incubated overnight at 37°C, 5% CO2. Cells were treated with concentrations of selumetinib ranging from 30 to 0.003 μmol/L for 72 hours. For the MTS endpoint, cell proliferation was measured by the CellTiter AQueous Non-Radioactive Cell Proliferation Assay (Promega) reagent as per manufacturer’s instructions. Absorbance was measured with a Tecan Ultra instrument. Expression of MEK and Cres signature genes was determined by RNA sequencing. Total RNA was extracted from cell lines and mRNA was enriched using the oligo dT magnetic beads. cDNA was synthesized from fragmented and size selected mRNA (~200 bp). Sequencing adaptors were ligated to the fragments and PCR amplified before sequenced using Illumina HiSeq 2000’s pair-end sequencing technology (2 × 90 bp). Roughly ~120 million reads were obtained for each cell line.

Sensitivity to MEK inhibition with selumetinib was defined as a GI50 under 3 μM, and further divided into partial (TGI not reached within 30 mM concentration range tested) and extreme (TGI< 5 μM) sensitivity. Resistant cell lines showed GI50> 20 μM and did not reach TGI within 30 μM concentration range tested. MEK signature was scored from RNAseq as the mean of gene centric RPKM for the 18 MEK signature genes [2]. Association between MEK signature score and categorical sensitivity to selumetinib was determined using ANOVA.

This study was conducted in two cohorts of Asian GC patients, which consisted of a Korean cohort (n = 125) and a Vietnamese cohort (n = 93). For the training set in the Korean cohort, positive control (KRAS altered) and negative control (KRAS wild) cases were selected from 312 surgically resected GC samples that had been sequenced as previously reported [11]. Positive control group (n = 17) consisted of 8 KRAS amplified tumors and 9 KRAS mutated tumors by target sequencing. Negative control group (n = 21) was confirmed to have no KRAS mutation and amplification. The remaining 87 of 125 specimens in the Korean cohort were from the GC molecular screening program, the VIKTORY molecular screening study (NCT# 02299648). Briefly, 87 patients had MEK signature scoring results from nanostring assay, in addition to the cancer panel sequencing results (either from Ion torrent or Illumina HiSeq). Clinicopathological information of Korean GC cohort, including age, sex, WHO histologic type, Lauren classification, clinical stage, and GC-associated survival data was collected. The study was approved by the institutional review board of Samsung Medical Center (IRB no. 2014-1-136). Written informed consent form was obtained from all patients before the study. All experimental procedures were carried out in accordance with guidelines approved by Samsung Medical Center.

Hematoxylin and Eosin stain was performed on one tumor section per patient and tumors were reviewed by a pathologist for tumor purity. Samples with < 50% tumor was discarded from the study. The tumor component was macro-dissected from 2 × 5 μm FFPET sections either from FFPET or fresh frozen samples and RNA was extracted using RNeasy FFPE Extraction kit (Qiagen) or QIAamp DNA Mini Kit (Qiagen, Hilden, Germany) according to the manufacturer’s instructions. Sample RNA was quantified using Qubit 2.0 Flourometer with the Broad Range RNA kit using the standard protocol. Samples that had < 20 ng/μl total RNA were not tested in the nanostring assay. Where available, more tissue for these samples were ordered, re-extracted, and those 20 ng/ul or greater were tested in the nanostring assay.

Nanostring assays were performed by following the standard protocol ‘Setting up 12 nCounter Assays (MAN-C0003-03, 2008–2013). Hybridization incubations were performed between 17–18hrs. Cartridges were either read immediately or stored dark (in aluminum foil) at 4ºC until ready to be read. All cartridges were read within 2 days of preparation, on the AZ GEN2 Digital Analyzer station with high resolution selected.

This work was supported by funding from the Korean Health Technology R&D Project, Ministry of Health & Welfare, Republic of Korea (HI16C1990, HI14C2188). Support was also provided by a grant from the 20 by 20 Project of Samsung Medical Center (GF01140111).