Background: Evidence regarding the benefit of therapy to prevent the post-polypectomy recurrence of colorectal adenoma is limited. Endoscopic recurrence is the main outcome according to an evaluation of trials involving recurrence prevention.

Aim: To estimate the recurrence rates of post-polypectomy colorectal adenoma in placebo-controlled arms of randomized clinical trials and to identify the prognostic factors influencing these rates.

Methods: We combined data from all randomized controlled trials evaluating therapies for colorectal adenoma using placebo from 1988 to 2016. The data were combined in a random-effects model. Primary outcomes were endoscopic adenoma and advanced adenoma recurrence of colorectal adenoma.

Conclusions: This meta-analysis confirms the heterogeneity of recurrence rates among post-polypectomy colorectal adenoma patients who received placebo. No single design variable was identified that might explain the heterogeneity.

As a malignant neoplasm, colorectal cancer is common worldwide, and its prevalence and case fatality are increasing [1]. Occurring within the lining of the large intestine, approximately 85% of colorectal cancers are believed to develop from adenomatous polyps, a process termed the adenoma-to-carcinoma sequence [2]. Although colorectal adenoma resection interrupts the progression to invasive disease [3], patients with adenoma (treated by polypectomy) remain at high risk for colorectal adenoma recurrence or the development of colorectal cancer [4]. Thus, a transition from surveillance for the early detection of cancer and adenoma to new approaches for prevention such as chemoprevention is required to relieve the burden of this disease.

Several large multicentre randomized double-blinded placebo-controlled trials have assessed the possible preventive effect of various agents on the recurrence of colorectal adenoma after polypectomy, including antioxidant vitamins, calcium, fibre, ursodeoxycholic acid, folic acid, difluoromethylornithine, metformin, and non-steroidal anti-inflammatory drugs, such as aspirin and selective COX-2 inhibitors [5–27]. Among those randomized controlled trials (RCTs) evaluating drugs for the chemoprevention of recurrence, both adenoma and advanced adenoma recurrence after polypectomy were evaluated as main outcomes.

Therefore, an accurate estimate of the recurrence rate among patients treated with placebo is essential to evaluate the natural history of the disease, calculate sample size, assess the effect size of treatment to formulate preventive strategies, and interpret the results of RCTs examining different treatments.

We conducted a meta-analysis to estimate the 1-year, 2-year, 3-year, 4-year, and 5-year recurrence rates in placebo-controlled groups and analysed the variability in recurrence rates by examining the heterogeneity among the studies; we also attempted to interpret this variability.

After reviewing the titles and abstracts, 20 articles [5-16, 18, 20, 22-27] were found to fulfil the inclusion criteria and were selected for review (Figure 1). Four studies [24–27] were published before 2000, and the remaining 16 [5–23] were published after 2000. The distribution of the baseline patient characteristics in the control arm of the 20 studies considered in this meta-analysis is shown in Table 1. The characteristics of the treatment and control arms of the studies considered in our analysis are reported in Supplementary Table 1. All RCTs included in this meta-analysis were double-blind, placebo-controlled trials, except for one [26] in which the control arm received no treatment. 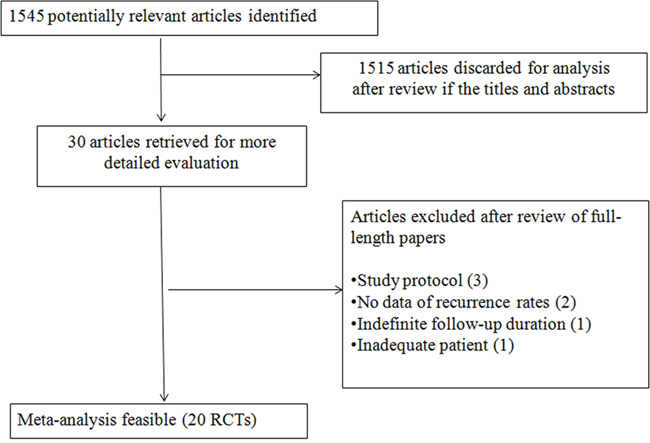 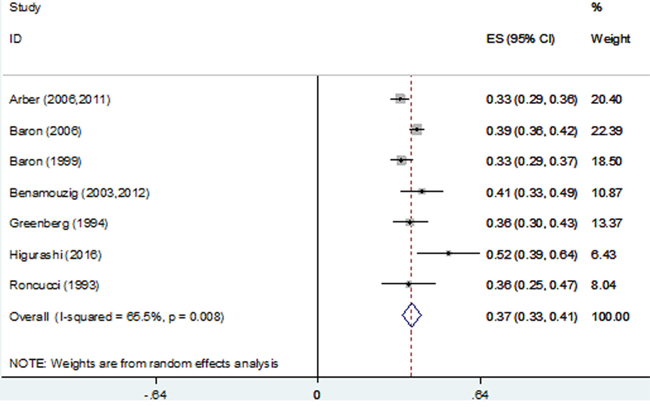 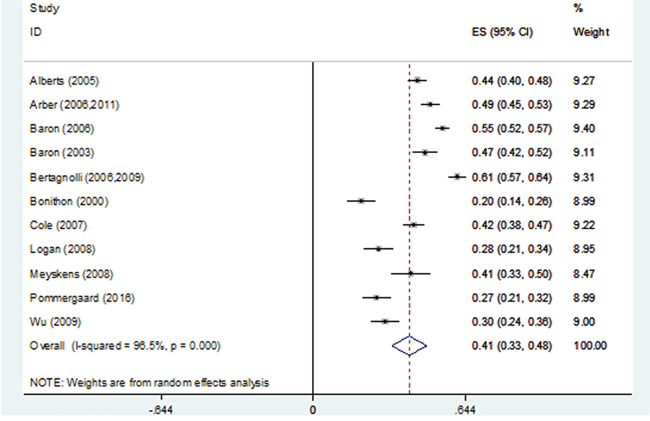 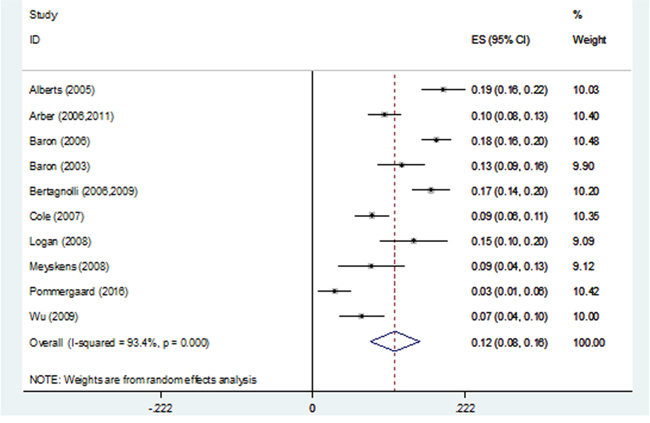 Using univariate regression, none of the 11 variables assessed was associated with an increase in either the 1-year or 3-year adenomas recurrence rate (Supplementary Table 3).

Subgroup analyses of the 1- and 3-year recurrence rates and the 3-year advanced adenoma recurrence rates were performed to evaluate whether the recurrence was inconsistent depending on the publication year, number of centres, scores of study validity, male gender percentage, mean age, percentage of aspirin users, current smokers, and family histories of colorectal cancer, as well as the use of daily calcium, alcohol, and folic acid (Table 2).

Table 2: Stratum-specific recurrence rates according to the studied features

Heterogeneity of the 3-year recurrence rate was less significant among studies in which the number of centres was < 10 and those in which the daily calcium intake was ≥ 1000 mg/d. Heterogeneity persisted in 4 strata: mean age, aspirin use, current smoker, and a family history of colorectal cancer.

Heterogeneity of the 3-year advanced adenoma recurrence rate was significant among all studies.

The sensitivity analysis excluded two RCTs [11, 13] that did not exclude patients with familial adenomatous polyposis syndrome; the results showed that the pooled estimate of the 1-year recurrence rate was 38% (95% CI, 34-42), with no significant heterogeneity (P = 0.052).

Using a univariate analysis, no variable was associated with both adenoma and advanced adenoma recurrence.

This analysis was based on summary data, and more detailed comparisons of recurrence might be made by performing a meta-analysis of individual patient data. Concomitantly, we realize that it may be impossible to collect individual patient data from every study, indicating that the studies from which we acquired the data may represent a biased sample of the available studies.

Finally, we must be cognizant of publication bias in settings in which many small studies are being conducted. Publication bias may occur; thus, studies indicating an apparent reduction of recurrence tend to be published more often than those indicating no distinction. The risk of having missed or overlooked RCTs in the setting of studies evaluating recurrence in patients with post-polypectomy colorectal adenoma was substantial. Therefore, it is possible that small studies with a low rate of recurrence or with a small drug effect remained preferentially unpublished. However, the adenoma or advanced adenoma recurrence rate at 1 year, and the adenoma recurrence rate at 4 or 5 years probably reflect no substantial publication bias, and such considerations are believed unlikely to change the magnitude of our pooled estimate rates.

In conclusion, the adenoma recurrence rates among post-polypectomy colorectal adenoma patients in the placebo-controlled groups were variable, and no single design variable was identified that explained the heterogeneity among the placebo arm outcomes for recurrence.

This meta-analysis indicates that conducting an RCT that measures a long-term endpoint is problematic in terms of endoscopic adenoma recurrence due to the high variability among the placebo arm rates. Moreover, we should not compare various RCTs with different follow-up durations or the use of different drugs because the differences in recurrence rates may be related to the variations in the demographic and baseline characteristics among the included subjects.

This analysis was performed in accordance with the PRISMA (Preferred Reporting Items for Systematic Reviews and Meta-Analyses) statement [33]. The primary sources of the reviewed studies, exclusively in English, were PubMed, the Cochrane Controlled Trials Register, and Web of Science; the following medical subject headings were used: adenoma or adenomatous polyp or polyps, colorectal or colon or rectum or large bowel, recurrence or relapse, and randomized or randomized trial or clinical trial. The search included literature published through July 2016. The computer search was supplemented with manual searches of the reference lists of all available review articles, primary studies, meeting abstracts, and bibliographies of books to identify other studies not identified in the computer search. When the results of a single study were reported in more than one publication, only the most recent and complete data were included in the meta-analysis.

Studies were included in the analysis when (1) they were RCTs comparing any therapy with placebo or no treatment in colorectal adenoma; (2) colorectal adenoma status was assessed using complete colonoscopy and no adenomas were knowingly left in the large bowel at enrolment; (3) adenoma recurrence was assessed as an outcome measure of the effect of treatment by colonoscopic follow-up; and (4) they were published or accepted for publication as full-length articles or abstracts. Decisions on which RCTs to include were made by two reviewers (X.S. and Z.Y.) who were not blinded. Queries concerning inclusion were resolved by discussion and consensus between these two reviewers. Excluded studies were identified together with the reason for exclusion. Among the 1545 articles reviewed, 20 RCTs [5-16, 18, 20, 22-27] met the inclusion criteria. Studies were excluded when the recurrence rates were not reported [34, 35]; they compared recurrence rates regarding colorectal cancer (CRC) [36]; or no definite follow-up duration was provided [37].

Review of the trials

Pooled estimates of the placebo-controlled groups’ endoscopic recurrence rates were calculated using a random-effects logistic regression analysis after applying sample weights based on the placebo sample size as implemented using Stata software (version 12.0; Stata Corporation, College Station, TX, USA). The assumption of heterogeneity implied by the utilization of random-effect models was justified by the differences in the patients’ features and study characteristics. Three methods were used to explore and explain the diversity among the studies: (1) stratum analysis of variables suspected of causing inconsistency; (2) meta-regression; and (3) subgroup analysis. Therefore, stratum-specific rates of endoscopic recurrence for different patient-level and study-level covariates were calculated. We used 11 stratifying variables: publication year, number of participating centres, study location, mean age, proportion of males, proportion of aspirin users, proportion of current smokers, proportion of family histories of CRC, use of calcium, use of alcohol, and use of folic acid. Only univariate regression models were used to examine the association between study design and the recurrence rates in placebo-controlled groups. We did not consider using multivariate analysis because of the wide heterogeneity and lack of complete data to identify possible variables that might explain heterogeneity. The correlation between continuous measures of the study characteristics was assessed using the Pearson correlation coefficient.