* These authors contributed to this work equally

Tacrolimus (FK506) and cyclosporine A (CsA) are widely used to protect graft function after renal transplantation. The aim of the present study is to determine whether the single nucleotide polymorphism of CYP3A5 is a predictive index of FK506 dose requirement, and also the selection yardstick of FK506 or CsA treatment.We tested archival peripheral blood of 218 kidney recipients for CYP3A5 genotyping with PCR-SSP. Meanwhile, the dose of FK506 and CsA was recorded, blood concentration of the drugs was measured, and graft outcome was monitored.These results indicate that CYP3A5*AA/AG carriers need higher FK506 dose than CYP3A5*GG homozygote to achieve the target blood concentration. For CYP3A5*GG carriers, taking FK506 or CsA are both advisable. CYP3A5*AA/AG carriers preferred to CsA treatment depending on the graft outcomes and drug costs. CYP3A5 genotyping is a new approach to detecting FK506 dose requirement and a predictive index for the FK506 or CsA treatment selection in kidney recipients.

Tacrolimus (FK506) and cyclosporine A (CsA), two kinds of immunosuppressive drugs, have been widely used in the field of renal transplantation. As triple-immunosuppressive regimen, FK506-Mycophenolate Mofetil (MMF)- Prednisone (Pred) or CsA-MMF-Pred was applied mainly depended on doctors’ experience and drug economics. However, there was no any detail treatment guidelines for the drug selection.

FK506 could protect transplant function. Underdosing of immunosuppressive drugs could cause immunological graft rejection and influence the recipients’ survival quality. However, once the recipients accepted FK506 as their immunosuppressive drug, most of them would have to take it all life long. Furthermore, it could cause a series of side effects, such as toxicity to graft, infection, and even malignant tumors. Therapeutic FK506 monitoring has been carried out routinely, since target blood concentrations was expected to achieve with the lowest dose of drug given.

There were several reasons for the marked heterogeneity among individuals in blood concentrations of FK506, which were achieved by a standard body-weight-based dosing. According to recent studies, the variation was determined by genetic factors to some extent [1], and also manifested as the pharmacokinetic differences among ethnic groups [2]. MacPhee [3] reported that FK506 pharmacogenetics was associated with polymorphic expression of cytochrome P4503A5 (CYP3A5), an oxidative enzyme involved in FK506 absorption and metabolism. It was found that CYP3A5*A expressers require two-fold higher doses of FK506 than CYP3A5*G ones to achieve the target blood concentration [3].However, it was reported that CYP3A5 polymorphism could also affect CsA pharmacokinetics in living donor renal transplant recipients [4]

In this present study, we intend to determine CYP3A5*A and CYP3A5*G allele frequencies in Chinese kidney transplanted recipients and its association with FK506 or CsA dose requirement. We also intend to figure out whether the single nucleotide polymorphism of CYP3A5 could be a selection yardstick of FK506 or CsA treatment.

A cohort of 218 kidney recipients was recruited. The basic data of the patients were shown in Table 1. There were 123 patients accepting FK506 treatment and 95 patients accepting CsA treatment after transplantation. In FK506 treatment group, the frequency of CYP3A5*AA was 11/123, CYP3A5*AG 47/123, and CYP3A5*GG 65/123. In CsA treatment group, the frequency of CYP3A5*AA, CYP3A5*AG, CYP3A5*GG was 9/95, 34/95 and 52/95 respectively. 81 patients were included in the CYP3A5* AG group, not much less than the CYP3A5*GG group (137 patients) ,which is a different situation from it in white peoples and middle-eastern [1]. The age of CYP3A5*GG individuals in FK506 group were younger than that in CsA group (p = 0.0011, Table 1). There was no significant difference in gender, weight, HLA mismatch number or primary diseases between folks with different CYP3A5 genotypes or different therapy regime (Table 1). 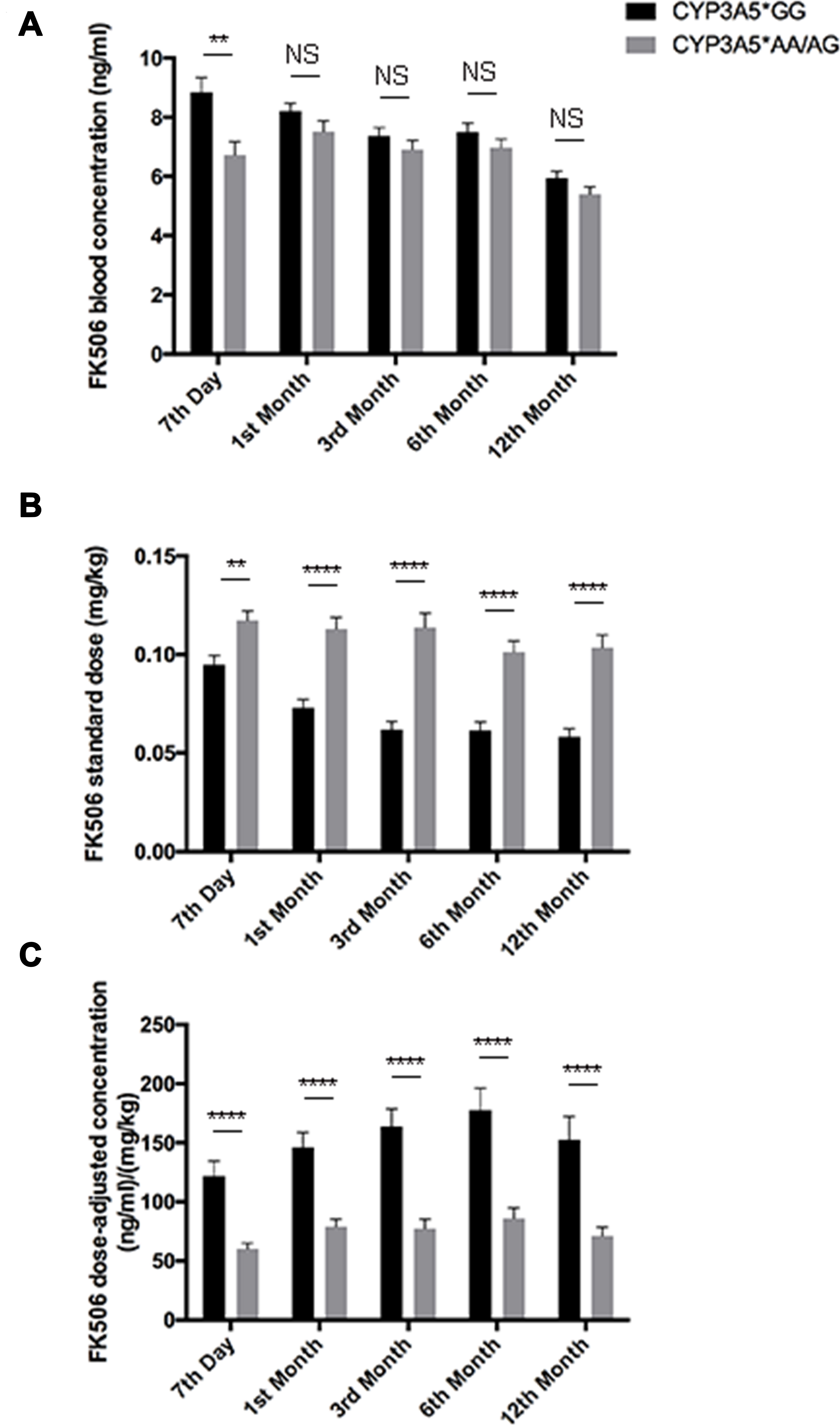 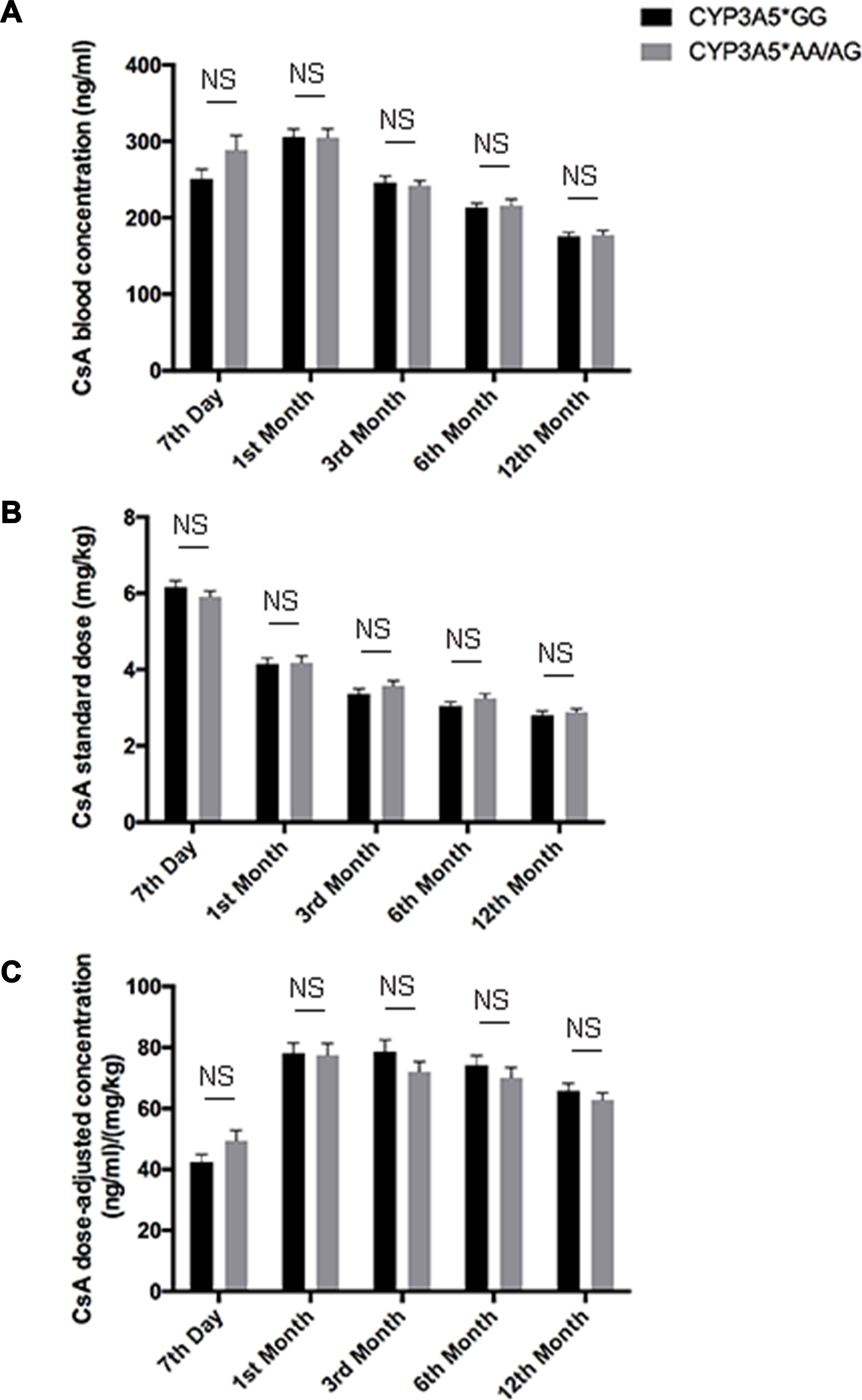 The relationship between CYP3A5 genotype and liver injury/renal function markers

The relationship between CYP3A5 genotype and liver/renal injury after kidney transplantation was analyzed for each patient. There were no significant differences in liver injury biomarkers alanine transaminase (ALT) or aspartate transaminase (AST), as well as renal function biomarkers serum creatinine (Scr) or bloodureanitrogen (BUN) in different CYP3A5 genotypes regardless of the therapy regime during the first year , as shown in Figure 3. 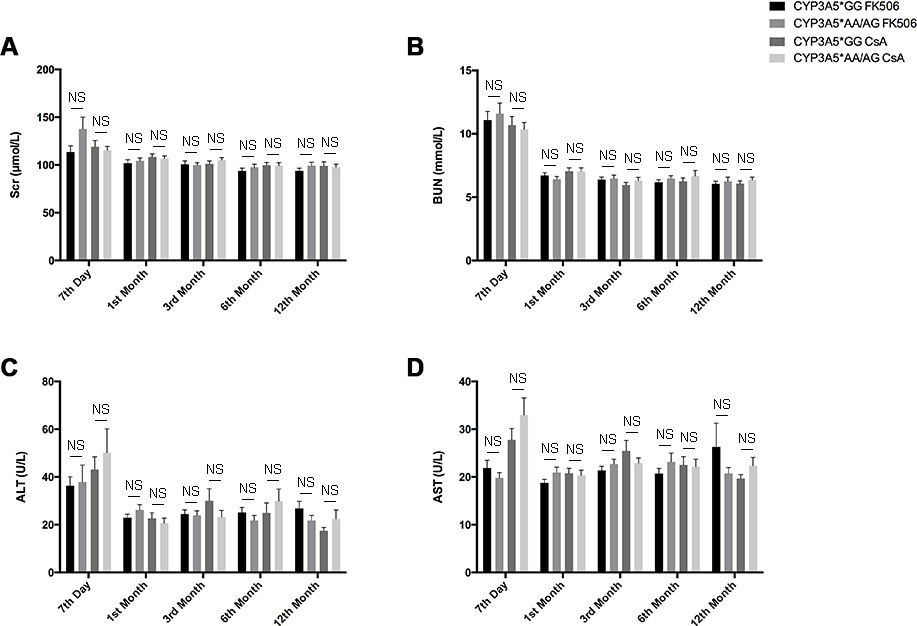 Table 4: Acute rejection rate before and after CsA shift to FK506

There was also no statistical significance in the the rates of side effects or postoperative complications, such as diarrhea (p = 0.371), drug-induced liver disease (DILD, p = 0.278), postoperative diabetes mellitus (PTDM, p = 0.079) and postoperative Leukocytopenia (p = 0.513) among these groups (Table 5).

The relationship between CYP3A5 genotype and immunosuppressive therapy cost 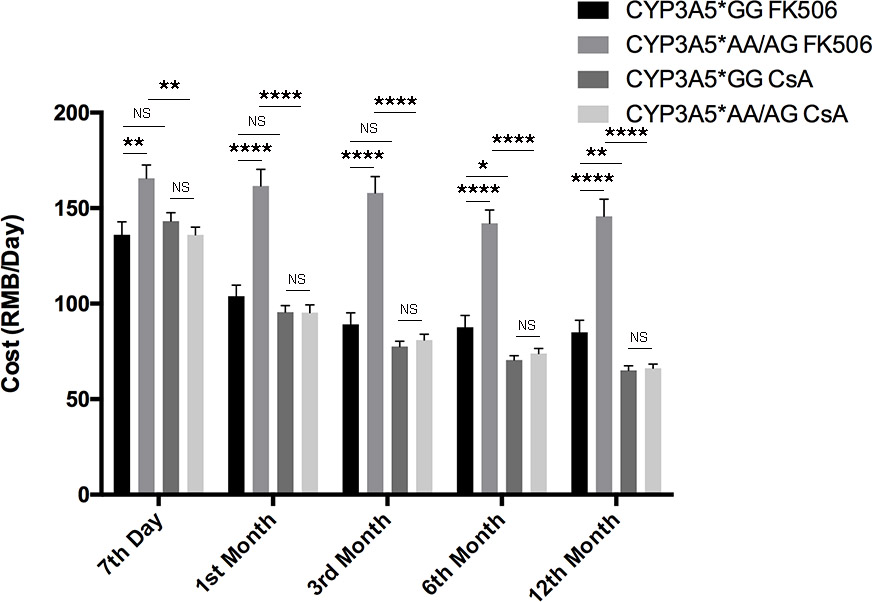 In our center, we had the standard triple-drug maintenance immunosuppressant included calcineurin inhibitor (FK506: trough level 5-10 ng/ml, or cyclosporine: trough level 200-300 ng/ml in half year after transplant), MMF or azathioprine, and Prednisone (in tapering doses from 80 to 10 mg/day )within the first month after transplantation for Chinese people [5-9]

On the other hand, we found some CYP3A5*GG carriers still needed higher FK506 doses. And some CYP3A5*AA/AG carriers just needed lower FK506 to keep the target blood concentration. Further research is necessary to explore the factors which induce the heterogeneity.

In our study, there was no significant difference in the 3-year graft survival rate between different CYP3A5 genotypes (data not shown) regardless of the immunosuppressive agents regime, which was consistent to previous reports [21]. Short follow-up and small size could partly account for this.

The liver injury (ALT, AST) and kidney functions (Scr and BUN) exhibited no significant difference among the different genotype groups during the first year after the kidney transplantation. It seems that even high dose of FK506 taken by the CYP3A5*AA/AG groups did not cause serious burden on liver or kidney, as they were supervised strictly and judged by the professional doctors carefully.

It was accepted that FK506 was associated with lower rejection rates and longer graft life spans compared to CsA22-26, spending more however. In China, the average cost of tacrolimus in a stable renal-transplant recipient every day is approximately 1.8 times as high as CsA. In our study, for the FK506 treated patients, CYP3A5*GG carriers can sustain effective therapeutic concentration with lower FK506 dose and thus cost less than CYP3A5*AA/AG carriers. For the CsA treated patients, there was no significant difference of CsA expense between the two genotype groups. For CYP3A5*GG carriers, FK506 treatment had to afford higher expense than CsA treatment after half a year. For CYP3A5*AA/AG carriers, it cost even more to take FK506 treatment.

In conclusion, CYP3A5 polymorphism profoundly influenced pharmacokinetics of FK506 but not CsA. Taking all these into consideration, if a recipient is a CYP3A5*GG carrier, taking FK506 or CsA are both advisable. However, for a CYP3A5*AA/AG carrier, FK506 should not be the first choice due to the crushing costs and similar outcome. CYP3A5 genotyping is a reasonable approach to detecting FK506 dose requirement and a predictive index for FK506 or CsA treatment selection in kidney recipients.

The studies on human samples were approved by Ethics Committee of the First Affiliated Hospital, School of Medicine, Zhejiang University. And Experiments conducted was in accordance with Declaration of Helsinki. Written informed consent was obtained from all participants. 218 live-donor renal transplant recipients transplanted in our center between Jun. 2008 and Oct. 2010, and treated with FK506 or CsA, were invited to participate in the study. All the patients were treated with standard triple-drug maintenance immunosuppression included calcineurin inhibitor (FK506: trough level 5-10 ng/ml) or CsA, either MMF or azathioprine and prednisone which tapered doses from 80 to 10 mg/day within the first month after transplant. The FK506 and CsA dose requirement was assessed after transplantation. All demographic characteristics or clinical data of patients were blind to the researchers that were responsible for the drug blood concentration detection or CYP3A5 genotyping. All patients were followed up until Aug. 2014.

Blood samples of 2 to 3 milliliters were drawn from each patient in a vacuum tube containing ethylene-diaminetetracetic acid. Genomic DNA was extracted from 250μl whole blood by Blood Genomic DNA Miniprep kit (Axygen). Polymerase chain reaction using sequence-specific primers (PCR-SSP) was performed to identify CYP3A5 genotype (Human CYP3A5 genotyping PCR kit, Biosuper). 112μL reaction mixture consisting of 12μL genomic DNA, 0.8μL Taq DNA polymerase (Promega) and 100μL dNTP-Buffer that was provided in the kit was prepared and 10 μL reaction mixture was added into each well of the 96-well plates that have contained sequence-specific primers. Amplification involved 1 cycles of 96°C for 2 min, 5 cycles of 96°C for 20 seconds and 68°C for 60 seconds, 10 cycles of 96°C for 20 seconds,65°C for 50 seconds and 72°C for 45 seconds, 15 cycles of 96°C for 20 seconds, 62°C for 50 seconds and 72°C for 45 seconds followed by final extension at 72°C for 5 min. The PCR product was obtained and aliquots of 10μL were analyzed by electrophoresis on a 2.5% agarose gel containing ethidium bromide to check the sizes and amounts of the amplicons. Finally, the band patterns were visualized using an ultraviolet, and the CYP3A5 genotypes were identified according to the typing table.

The dose and blood concentrations of FK506 and CsA for recipients were measured at day 7, 1st month, 3rd month, 6th month and 12th month after renal transplantation, as well as hepatic and renal function. The FK506 blood concentration was measured using a PRO-TracTM II FK506 ELISA kit (DiaSorin Inc.), which were performed on a clinical analyzer.

Mean and standard deviation (mean ± SD or mean ± SEM) were used to describe continuous variables, while percentage was used to describe categorical variables. Continuous variables were compared via analysis of variance (ANOVA). Comparison of frequencies was performed by chi-square test. Graft survival was analyzed with Kaplan- Meier method and differences between survival curves were calculated by the log-rank test. Logistic regression was conducted to reveal the influence factors of renal acute rejection. Values of P < 0.05 were considered statistically significant.

1. MacPhee IA, Holt DW. A pharmacogenetic strategy for immunosuppression based on the CYP3A5 genotype. Transplantation 2008; 85:163-5.