Occupational ultraviolet exposure and risk of non-Hodgkin's lymphomas: a meta-analysis

The incidence of NHL increased dramatically between 1970 and 1995. This remarkable rise suggests a major role for environmental factors in the etiology of NHL, thus the hypothesis that solar ultraviolet(UV) radiation may explain this trend emerged in 1992 [4].

As the increasing incidence of NHL mounting studies associated with the relationship between sun exposure and risk of NHL were carried out in westernized countries. But the results have been inconsistent. We therefore undertook a meta-analysis of case-control and cohort studies to quantitatively assess the relationship between occupational sun exposure and risk of NHL and common NHL subtypes.

Our systematic literature search details were shown in (Figure 1) based on search strategy and inclusion criteria. We identified 1034 abstracts from PubMed, ISI Web of Science, the Cochrane Library and EMBASE. After removing duplication 940 abstracts were remained. Of these 940 abstracts, 907 were excluded after screening titles and abstracts. The remaining 33 of them were extracted for further assessment. Twenty-two articles were excluded after full-test review. Fifteen articles were excluded because they did not investigate the association between sun exposure and NHL risk [5-19], five was insufficient information [20-24], and two was the duplicate report on the same study population [25, 26]. Thus, ten case-control studies [27-35, 37] and one cohort study [36] were eligible for our meta-analysis. 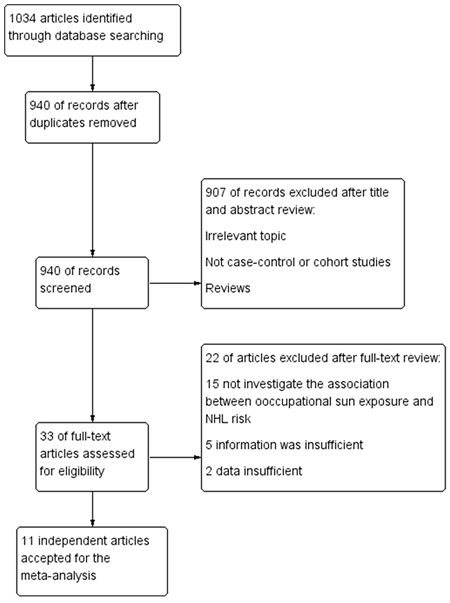 Figure 1: Flowchart of selection of studies for inclusion in the meta-analysis.

The age of participants were all aged 17 and above. The exposure odds ratios (ORs)/relative risk (RRs) of NHL, the adjustments made for confounding and occupational history assessment were shown in Table 2.

Table 2: Adjustments and occupational history assessment reported by single study in this meta-analysis

Association between occupational sun exposure and risk of NHL 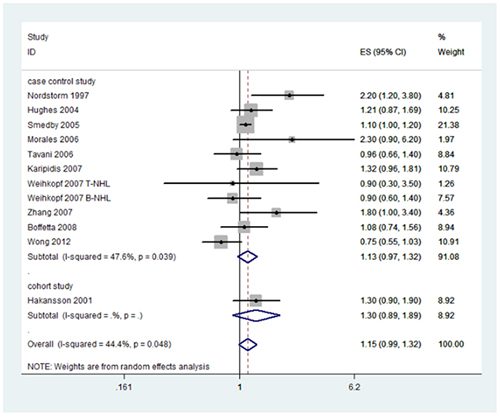 Figure 2: Forest plot and summary OR of the association between occupational sun exposure and risk of NHL.

Ten studies reported the Caucasian population. Occupational sun exposure was positively associated with the risk of NHL 1.14 (95%CI: 1.05, 1.23; I2=25.4% p for heterogeneity =0.202). No heterogeneity was observed, thus fixed-effect model was provided. (Figure 3) 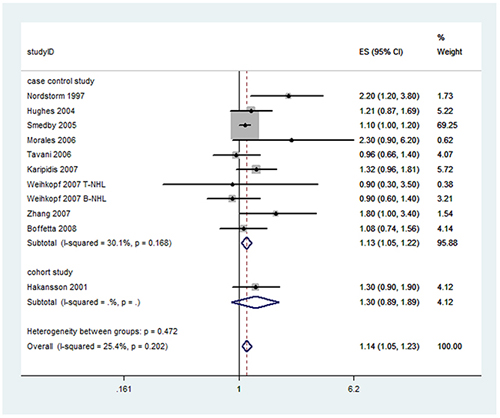 Figure 3: Forest plot and summary OR for Caucasian population of occupational sun exposure and risk of NHL. 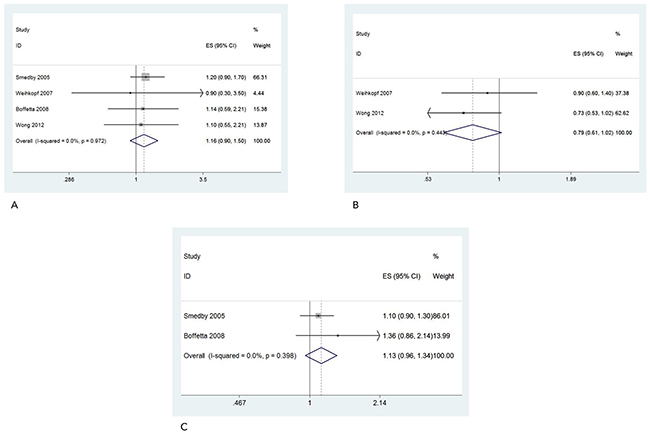 Figure 5: Forest plot and summary OR of male (A) and female (B).

In order to evaluate the impact of potential publication bias, we applied the Begg’s test (p=0.37) and Egger’s test (p=0.37) for the association between occupational sun exposure and the risk of NHL. The results indicated no publication bias among these studies. In addition, no publication bias was detected for the positive association between occupational sun exposure and the risk of NHL in Caucasian population, either (Begg’s test: p=0.53; Egger’s test: p=0.14). To investigate heterogeneity in our meta-analysis, we evaluated sensitivity analysis within the studies. Eleven studies which included in our meta-analysis were the relationship between occupational sun exposure and risk of NHL, two studies were focused on specific types of NHL [27, 37], so we conducted a sensitivity analysis restricted to those nine studies. Results did not change when the aforementioned studies were included or excluded. The pooled OR was 1.09 (95%CI: 0.97, 1.23) with a significant decreased heterogeneity among these nine studies (I2=25.1%, p for heterogeneity =0.21 (Figure 6A). The result was consistently to the overall pooled OR, which suggested our study was reliable.

Figure 6: Sensitivity analysis of forest plot and summary OR of nine studies (A) and face to face interview studies (B).

Data collection method from six studies were in person interview [30, 32-35, 37], four studies were though self-administered questionnaire and followed by a telephone interview [27-29, 31], and one study was used the data files from nationwide occupational health service organization [36]. We conducted a sensitivity analysis restricted to six in person interview studies [30, 32-35, 37]. Results of pooled OR was similar 1.03(95%CI: 0.81, 1.30) (Figure 6B). There were almost no heterogeneity among studies (I2=40.2%, p for heterogeneity =0.12).

We applied sensitivity analysis on our positive results among Caucasian population. The pooled estimate did not vary substantially with the exclusion of any single study (Figure 7). 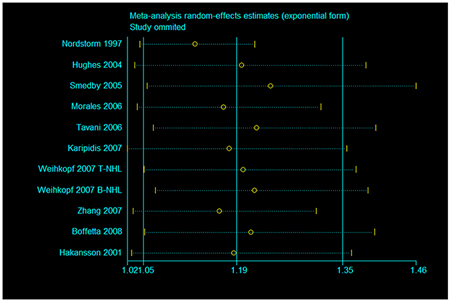 Our main findings showed no association between occupational ultraviolet exposure and NHL risk. When we omitted the study of Asian population our results are positively correlated. Hughes et al reported the pigmentary characteristics and NHL risk. In this study, it categorized the six ethnicity groups including Asian. They have found that the very fair skin compared to brown or olive skin had 44% increased risk of NHL [25]. Interestingly, the Singapore study was not only the Asian population study but also the only low latitudes study [35]. Several studies have yielded the same results. Reduced risk or no effect were found in mid latitudes or low latitudes [28, 38], while increased risk was found at higher latitudes [26, 39-41]. Grant WB proposes that UVA is a risk factor through impairing the immune system, while UVB is a protection factor through vitamin D production [42]. The ratio of UVA/UVB increases while latitude increases. Thus, the pooled result of our higher latitude Caucasian population studies showed that occupational UV exposure was a risk factor for NHL.

Many of the studies which included in this meta-analysis reported that there is no relationship between occupational UV exposure and NHL risk, however at the same time, reported the daily, casual UV exposure is a protective factor for NHL [28, 29, 32, 34, 35]. This result was consistent with InterLymph Organization2008 analysis [43]. One possible explanation is that most studies would have attributed any time duration occupational UV exposure cases into exposure group, while for the individual, it may be exposed to a period of time, rather than continuous exposure [28, 35, 43]. In addition, farmers often categorized into occupational UV exposure group, but some of these people at the same time contacting potential risk factors NHL such as pesticides, alkylation, etc [30, 36]. For example, Smedy et al published that Ever having an outdoor occupation for 1 year or more was associated with a slightly increased risk of non-Hodgkin lymphoma (OR = 1.2, 95% CI = 1.0 to 1.3), but this association was weakened (OR = 1.1, 95% CI = 1.0 to 1.2), after additional adjustment for occupational exposure to pesticides [29].

As with any meta-analysis of observational studies, our study has limitations.

First, moderate heterogeneity was found across our main analysis, which can be explained by the multiple differences between studies with regard to the study designs, sample sizes, analysis strategies, participants’ baseline characteristics, adjustments for confounders and occupational history assessment methods. For example, the control source of eight studies were population based [27-29, 31-33, 36, 37], and two studies were hospital based [30, 35], while one study included both population control and hospital based control source [34]. Sample sizes were different from eleven studies included in this meta-analysis. Two studies had relatively small numbers of participants and specific NHL types [27, 37], which raised some concerns regarding the reliability of their results. Thus, we used the random-effects model to determine the overall estimate of variability.

Secondly, half of the studies in this meta-analysis relied on self-administered questionnaire, while anther half studies gathered information from interview. The participants may have different attitudes and different understanding towards questions under different methods. Besides, the total occupational sun exposure hours are varies across studies and participants. Finally, in a meta-analysis of published studies, the potential publication bias might influence the results, because studies with null results tend not to be published. Nevertheless, our publication bias test showed no possible bias.

In summary, our meta-analysis suggested that occupational UV exposure was a risk factor for NHL in Caucasian population. While, there had no relationship between occupational ultraviolet exposure and risk of NHL as well as NHL common subtypes. Besides, gender specific occupational sun exposure also indicated no association on risk of NHL.

We reported this article in accordance with MOOSE (meta-analysis of observational studies in epidemiology) guidelines [44]. We systematically searched four databases: PubMed, ISI web of science, the Cochrane Library and EMBASE for studies published in any languages (up to 2016, August 17th) using the following search items: ultraviolet radiation, ultraviolet ray, ultraviolet light, sunlight exposure or solar ultraviolet exposure combined with non-Hodgkin lymphoma or lymphoid malignancies. The search was restricted to studies of human participants. We also have reviewed the reference lists of all pertinent articles to search for more studies.

To be included in this meta-analysis, studies had to have met the following criteria: (1) NHL cases were medically confirmed by histopathology diagnoses; (2) the study was designed as case-control or cohort study; (3) the occupational sunlight exposure and incidence of NHL were associated; (4) detailed data of odds ratios (ORs) or relative risks (RRs) with 95% confidence interval (CI); (5) All the cases were adult (age≥17 years old). We did not include the studies that only report the death rate of NHL without incidence rate. When there were multiple published reports from the same study population, the most recent or the most informative report was selected for analysis.

We extracted the following information from each study: authors’ name, year of publication, study type, study location, sample size (numbers of case patients and control subjects), study period, participation’s age, type of control source, assessment of data collection, and statistical covariates adjustment in the analysis. ORs or RRs with corresponding 95%CIs for each study were either extracted directly from the article or calculated from available raw data.

To pool the results of individual studies together, we used a general variance-based method in the meta-analysis. The multivariate adjusted ORs and 95% CIs presented in the literature were used. In situations where the incidence is low, the odds ratio approximates the relative risk, therefore, in looking at studies of NHL (a rare condition), it is acceptable to compare OR and RR estimates [45]. The outcomes are presented as a forest plot with 95% CIs.

Statistical heterogeneity among studies was tested with the Q statistic, and statistical inconsistency was quantified with the I2 statistic [46]. When I2 was from 0% to 40% along with p >0.10 the heterogeneity might not be important. If the meta-analysis has no heterogeneity, fixed-effects model with the Mantel-Haeszel method would be used to combine the individual studies [47], otherwise, the random-effects method (DerSimonian 1986) was used for pooling [48].

There were two studies focused only on specific types of NHL [27, 37]. We further conducted a sensitivity analysis restricted to the rest nine studies to evaluate the stability of the pooled estimates between occupational sun exposure and risk of NHL.