Accumulating evidence has shown that DNA methylation, a major molecular mechanism of epigenetic changes, is correlated with human malignant tumors, including lung cancer [4–7]. Genes with aberrant DNA methylation can be noninvasive biomarkers for the detection and diagnosis of cancer [8–10]. Methylated genes were found in body fluid samples, such as plasma, urine, sera, and sputum, indicating that DNA methylation had the potential value as a biomarker in non-invasive cancer screening and diagnosis [11–13].

P16, consisting of an alternative reading frame of cyclin-dependent kinase inhibitor 2A (CDKN2A), is thought to function as a tumor suppressor by negatively regulating the cell cycle and inhibiting cell proliferation [14, 15]. RASSF1A (Ras association domain family 1 isoform) could lead to tumourigenesis associated with the regulation of the cell cycle, apoptosis, migration and adhesion [16, 17]. The adenomatous polyposis coli (APC) gene encodes a large multidomain protein and its dysfunction participates in tumor development [18, 19]. The human homeobox gene SHOX2 (short stature homeobox 2) as a regulator affects skeletal, heart and nervous system development, along with embryonic morphogenesis [20, 21]. A large number of genes are shown to be frequently methylated in tissue specimens in lung cancer, including P16, RASSF1A, APC and MGMT [22, 23].

As depicted in Figure 1, on the basis of the inclusion criteria, final 21 eligible studies involving 20 genes were evaluated in bronchial aspirates in lung cancer [24–44]. Of these genes, four genes with more than three studies evaluated the relationship between the methylation status of the P16, RASSF1A, APC and SHOX2 genes and lung cancer. The remaining 16 genes were also assessed in fewer than four studies in the current study. The general characteristics of the studies of eligibility are presented in Supplementary Table 1. 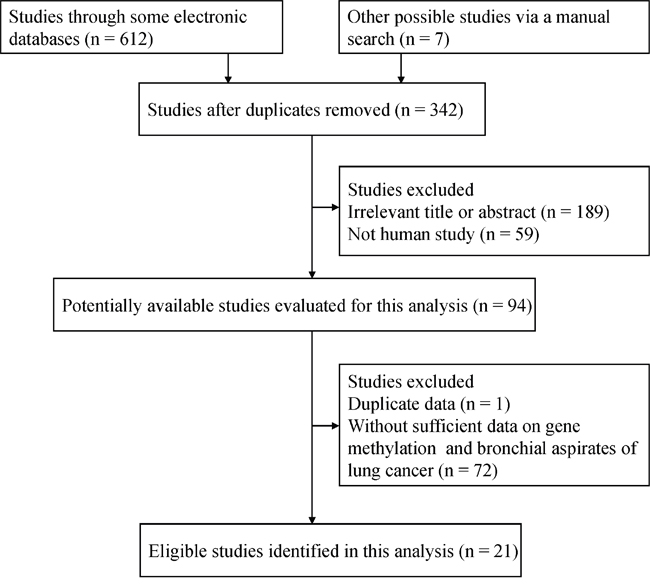 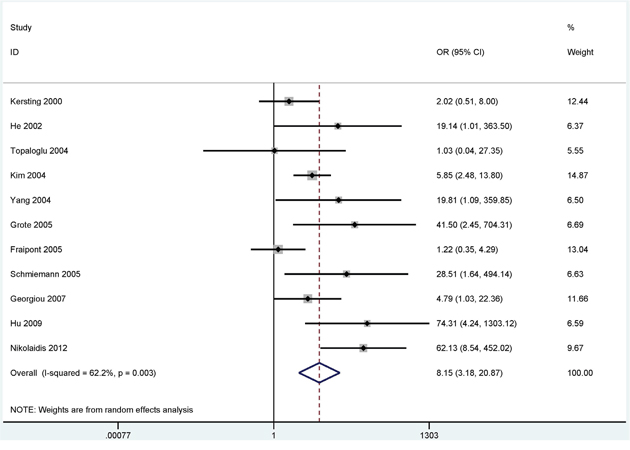 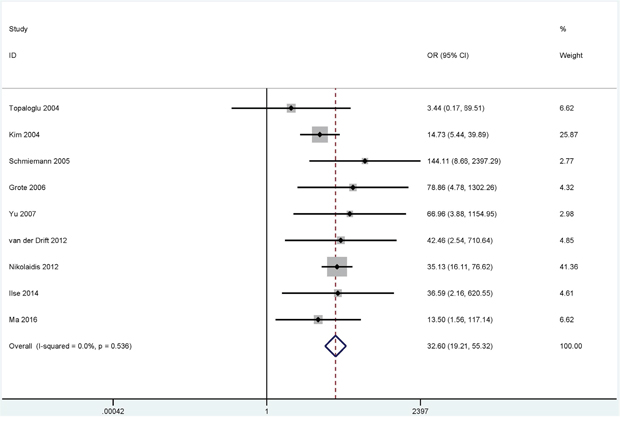 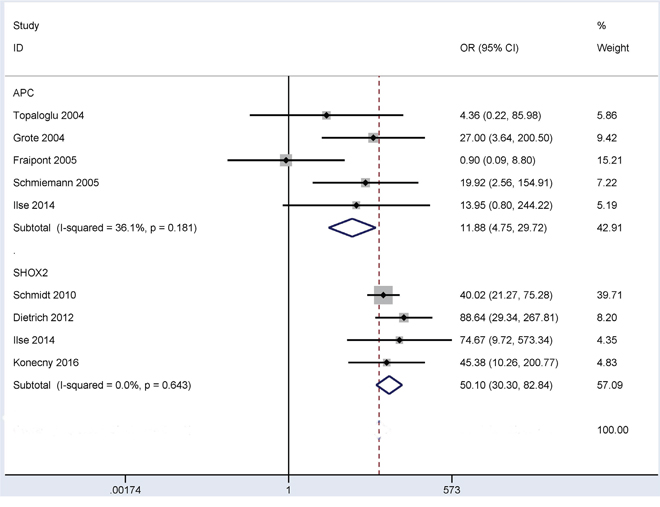 For analyses with less than four studies on the remaining 16 genes, the methylation frequency of nine genes was significantly higher in bronchial aspirates of patients with lung cancer than in controls without cancer (Supplementary Table 2).

Subgroup analyses of the P16 and RASSF1A methylation

Sensitivity analysis of the P16 methylation

We further determined whether the methylation of the P16, RASSF1A, APC, SHOX2 and RARβ2 genes in the current study showed different methylation characters in SCC vs. AC and NSCLC vs. SCLC.

When SCC was compared to AC (Figure 5), our results showed that a significant correlation was observed between the methylation of the SHOX2 gene and tumor histology, and its methylation frequency was significantly higher in SCC than in AC (OR = 4.32, 95% CI = 2.50 - 7.46, P < 0.001). However, no significant relationship was found between P16, RASSF1A, APC or RARβ2 methylation and these two histotypes (P > 0.1). 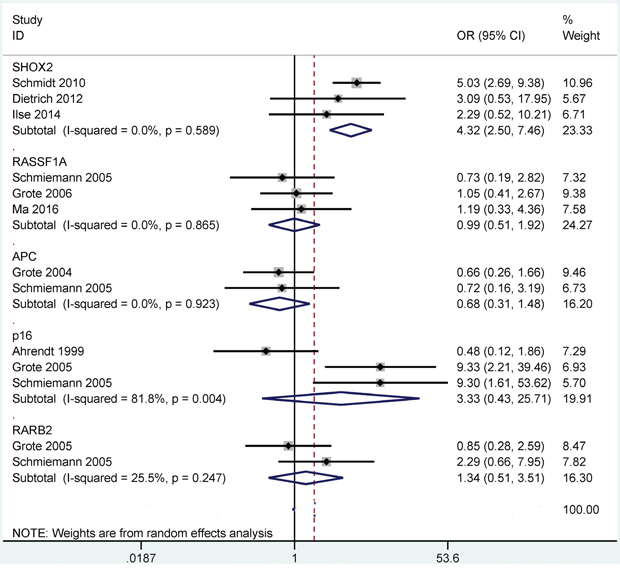 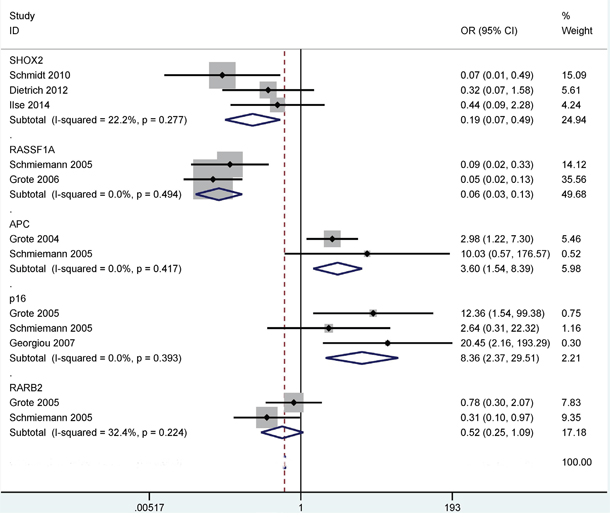 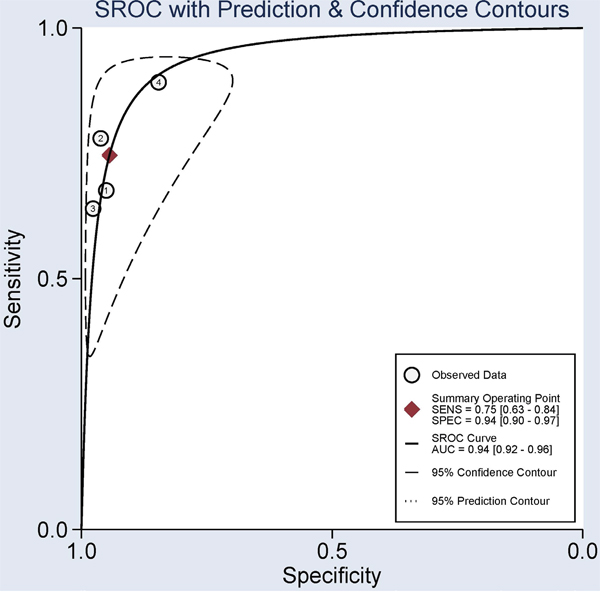 Aberrant promoter methylation of tumor related genes has been reported as a promising noninvasive biomarker based on the use of feces and serum for future cancer detection and diagnosis in clinical practices [45, 46]. However, the methylated genes DNA test in samples from bronchial aspirates was not evaluated in lung cancer. A systematic study of epigenetic association publications was conducted to determine whether the use of gene methylation can become a feasible biomarker in bronchial aspirates for lung cancer screening.

Some studies have shown that gene methylation can be detected in body fluid samples, such as blood and feces samples, suggesting that tumor suppressor genes with aberrant DNA methylation have the potential to be noninvasive biomarkers that may contribute to the early diagnosis of cancer [45–47]. Hence, we further analyzed the diagnostic capacity of the P16, RASSF1A, APC and SHOX2 methylation based on the use of bronchial aspirates in lung cancer. The results demonstrated that the P16, RASSF1A and APC methylation with low sensitivity (< 0.5) and AUC (< 0.8) could not distinguish lung cancer and non-tumor samples well. Interestingly, the combined sensitivity, specificity, and AUC values of the SHOX2 methylation were 0.75, 0.94, and 0.94, respectively, which were very good (sensitivity = 0.75 > 0.5, specificity = 0.94 > 0.9, and AUC = 0.94 > 0.9), indicating that detection of the SHOX2 methylation could be a specific noninvasive biomarker for lung cancer diagnosis using bronchial aspirates.

When lung cancer patients were compared to controls, a substantial heterogeneity was measured in the P16 gene (I2 = 62.2%, P = 0.003). When we removed two studies [27, 34] and re-calculated the overall OR, the pooled result did not significantly change with an absence of heterogeneity, suggesting the stability of our analysis. In our study, a subgroup analysis of the testing method showed that the P16 methylation was correlated with lung cancer in different methods. The reason of substantial heterogeneity was not very clear, but possible reasons could be inappropriate primers and the condition of detection of the P16 methylation.

The present study had some limitations. First, we searched the abovementioned electronic databases to minimize the potential bias as completely as possible, while only available articles published in English or Chinese were included in this analysis. Publications in languages other than English and Chinese were excluded, and conference abstracts were also excluded due to insufficient data. Second, based on small sample sizes, the results regarding the comparison of the different tumor histotypes should be done to further validate the detection of the SHOX2 gene in lung cancer histology in the future. Third, for the remaining 16 genes with small subjects, further large-scale clinical research with a large sample size is essential in bronchial aspirates. Finally, prospective large-scale studies with sufficient information, such as early and advanced stages of patients with lung cancer in bronchial aspirates, are crucial in future research.

We performed a systematic literature search of the PubMed, Embase, EBSCO, Wanfang, and Cochrane Library databases until October 11th, 2016. The following key words and search terms were used: (lung cancer OR lung tumor OR lung carcinoma OR lung neoplasm) AND (methylation OR hypermethylation OR epigenetic silencing OR epigenetic inactivation) AND (bronchial* OR bronchial washings OR bronchoalveolar lavage OR bronchoalveolar lavage fluid OR BALF OR BAL). We did not apply language restrictions. To obtain other potential publications, the references of the included studies were also manually investigated in this study.

The selection criteria included the following: 1) patients were diagnosed with lung cancer by histopathology or endoscopy; 2) case-control or cohort design provided sufficient information regarding gene methylation in bronchial aspirates (bronchial washings, bronchoalveolar lavage fluids); and 3) the full texts of all of eligible studies were published in English or Chinese. For the presence of more than one published paper that used duplicated data, only the most recent study with more information was included in the present analysis.

We extracted the following information from eligible studies: the names of the first author, year of publication, country, ethnic population, histology, mean or median age, clinical stage, smoking information, gender status, methodology of the detection of gene methylation, number of case and control groups, frequency of gene methylation, and tumor histotypes. Lung cancer included NSCLC and SCLC types from the original articles in the present study.

Data were calculated with Stata software (version 12.0, Stata Corporation, College Station, TX, USA). The relationships between gene methylation and lung cancer were evaluated by the combined odds ratios (ORs) and their 95% confidence interval (95% CI). The correlations between gene methylation and tumor histotypes were also determined in this study. The statistical heterogeneity was measured based on the Cochran’s Q statistic and I2 test [49]. A P value of < 0.1 for the Cochrane Q test and an I2 value of > 50% were considered as substantial heterogeneity, and the random-effects model was applied for this meta-analysis; otherwise, a fixed-effects model was used [50, 51]. To evaluate the influence of an individual study on the pooled results, the omission of one study was performed by sensitivity analysis when significant heterogeneity was tested in genes with more than five studies [52]. Subgroup analyses were carried out to find the differences among the different subgroups. Additionally, according to the bivariate analysis, the pooled sensitivity, specificity, and the summary receiver operator characteristic (SROC) curve (AUC) values were utilized to further evaluate and explore the diagnostic effect of P16, RASSF1A, APC and SHOX2 methylation in bronchial aspirates of patients with lung cancer. An AUC value was commonly applied to determine the accuracy of the diagnostic test in the meta-analysis [53, 54].

TH and MY conceived and designed the study. SN and MY contributed to the retrieval of articles, the extraction of data, the calculation of data and the design of the figures and tables. All authors approved the final manuscript.