Methods: A total of 233 consecutive HCC patients underwent curative hepatectomy were included in our study. Independent risk factors influencing the prognosis were identified, and preoperative predictors for MVI were determined.

Conclusions: MVI is associated with a poor prognosis in solitary HCC ≤ 5 cm after hepatectomy. Anatomical resection could improve the prognosis of HCC patients with MVI. The preoperative prediction scoring model has practical value for the prediction of MVI.

Hepatocellular carcinoma (HCC) is the sixth most common malignancy and the third leading cause of cancer-related death worldwide [1]. Due to recent advances in diagnosis and surgical technology, curative hepatectomy is now widely considered as the first choice of therapy for HCC with well liver functional reserve, especially early-stage HCC [2]. However, even with these advances, the long-term outcomes of HCC remain unsatisfactory due to the high postoperative recurrence [3]. Approximately 70% of HCC patients have a recurrence within the 5 years after curative hepatectomy [4].

Vascular invasion is generally considered as an important risk factor for the prognosis of HCC patients after curative hepatectomy [5]. Macrovascular invasion, which could be evaluated by macroscopic examination or preoperative imaging, is helpful to provide a basis for selecting rational therapy. However, microvascular invasion (MVI) is difficult to be used for evaluating the prognosis of HCC preoperatively because it is only confirmed after operation by histopathological diagnosis [6]. MVI, defined as the invasion of tumor cells in intrahepatic portal vein or hepatic vein branches, is the beginning of intrahepatic dissemination and metastasis in HCC [5]. The prevalence of MVI ranges from 15% to 57% in HCC specimens [7]. Although the formation mechanism of MVI is not clear, previous researches have identified MVI is associated with poor prognosis of HCC patients after hepatectomy [8, 9]. To our knowledge, MVI is more common in advanced HCC patients presented with large size (tumor size > 5 cm) and multiple lesions [10]. But there are few researches focused on the influence of MVI on the prognosis of early-stage HCC (solitary, tumor size ≤ 5 cm, without macrovascular invasion). In the present research, we aimed to investigate the prognostic outcomes and preoperative predictors of MVI in early-stage HCC patients after curative hepatectomy.

Comparisons of long-term survival according to MVI 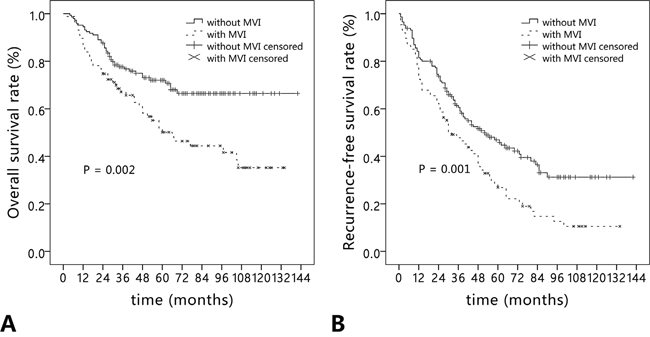 Figure 1: Long-term outcomes in hepatocellular carcinoma patients with (n = 87) and without microvascular invasion (n = 146). (A) Overall survival; (B) recurrence-free survival. 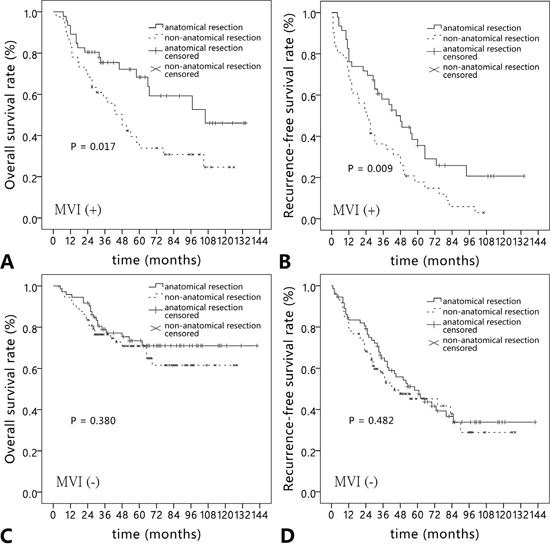 The recurrence patterns of HCC patients with and without MVI

Table 4: The recurrence patterns of hepatocellular carcinoma patients with and without microvascular invasion 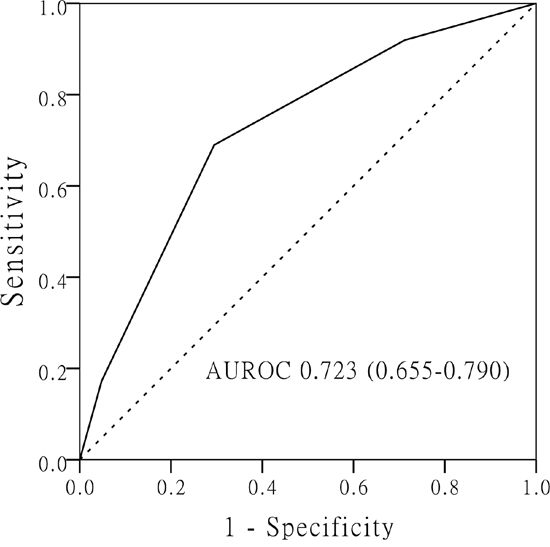 A systematic review including 20 observational studies revealed MVI was closely related to poor prognosis of HCC patients [15]. However, the presence of MVI was reported to be associated with tumor size [9, 16]. Ahn et al found that patients with tumor size > 5 cm had higher risk of MVI than those with tumor size ≤ 5 cm [17]. In the previous study of our group, the prevalence of MVI was 55.7% in solitary HCC patients with tumor size > 5 cm [18]. In patients with advanced HCC, it is generally accepted that MVI is the main cause for metastasis and recurrence after hepatectomy [10, 19]. But there is controversial about the significance of MVI on the prognosis of early-stage HCC. Shindoh et al suggested small HCC (≤ 2 cm) was related to a good prognosis without regard to the presence of MVI [20]. Nevertheless, Du et al claimed MVI is a poorer prognostic predictor for small HCC (tumor size ≤ 3 cm) [21]. In our research, the prevalence of MVI was 37.3% in early-stage HCC. The 1-, 3-, 5-year overall survival and recurrence-free survival rates of patients with MVI were significantly poorer than those of patients without MVI. MVI was the only independent risk factor for both the overall survival and recurrence-free survival rates in this study.

Unfortunately, MVI is only confirmed after hepatectomy by histopathological diagnosis, which limits its widespread use in the choice of surgical procedure. Therefore, it is valuable to identify the predictors for MVI preoperatively. By retrospectively investigating preoperative characteristics of patients, We identified three independent predictors for MVI: tumor size > 3.5cm, AFP > 200 ng/ml and GGT > 53U/L. Tumor size is considered as the most valuable predictor for MVI in HCC patients [10, 25]. The risk of MVI continues to rise with the increase of tumor size. Our research showed tumor size was still a strong predictor for MVI, even in solitary HCC patients with tumor size ≤ 5 cm. The significant cut-off value of tumor size was identifed as 3.5 cm. The elevated level of AFP have been reported to be associated with MVI [26, 27]. Schlichtemeier et al investigated 125 HCC patients who underwent liver resection, and showed that a serum AFP level ≥ 400 ng/ml was independently associated with MVI [28]. The cut-off value of AFP was higher than ours because only early-stage HCC patients were included in our research. Circulating tumor cells is considered as one possible mechanism of MVI [29, 30]. Jin et al reported that the high AFP mRNA level of circulating tumor cells was a valuable predictor for vascular invasion of HCC after hepatectomy [31]. The results might explain the relation between high level of AFP and MVI. Aberrant expression of GGT has been found in HCC and plays an important role in tumor formation and metastasis [32]. A previous research by Ju et al demonstrated the high level of GGT was related to vascular invasion, advanced tumor and tumor size [33]. Zhao et al suggested serum GGT > 130 U/L was an independent predictive factor for MVI in multinodular HCC [10]. While in the present research, our results showed GGT > 53U/L was strongly associated with MVI for early-stage HCC. Based on these three predictors, we built up a prediction scoring system for the risk of MVI. According to the ROC curve, the prevalence of MVI in HCC patients with predictive score ≥ 2 was 58.3%, which was obviously lower than those with predictive score < 2 (20.8%).

The present research has some limitations. First, it is a single-center and retrospective research. Therefore, it was subject to potential bias that might preclude definite conclusions to be drawn. The prognostic value and preoperative predictors of MVI require prospective and multicenter validations. Second, thin-slice contrast-enhanced CT and gadolinium-ethoxybenzyl-diethylenetriamine pentaacetic acid (Gd-EOB-DTPA) MRI have been reported to be helpful for predicting MVI preoperatively [29, 34]. Because these imaging techniques were widely applied in recent years, detailed imaging imformation in early patients of our cohort were not included in the present research.

In conclusion, our study indicated that MVI was an independent risk factor for the overall survival and recurrence-free survival rates of solitary HCC patients with tumor size ≤ 5 cm after hepatectomy. For HCC patients with MVI, anatomical resection could significantly improve the overall survival and recurrence-free survival rates. Based on tumor size > 3.5cm, AFP > 200 ng/ml and GGT > 53U/L, the prediction scoring model are valuable for the preoperative prediction of MVI.

A total of 307 consecutive HCC patients (size ≤ 5 cm) underwent curative hepatectomy in the Department of Hepatobiliary Surgery at Nanjing Drum Tower Hospital between January 2004 and December 2013. Patients met the following criteria were enrolled in the present study: (1) no evidence of macroscopic vascular invasion, (2) solitary tumor, (3) Child-Pugh A/B, (4) R0 tumor resection, (5) no any preoperative anticancer treatments, (6) no history of other cancers, (7) complete clinical and pathological data. Eventually, a total of 233 early-stage HCC patients were enrolled. The present study was carried out in accordance with the Declaration of Helsinki revised in 1983. The retrospective study was approved and exempted from the requirement to obtain informed consent by the Committee on Medical Ethics of Nanjing Drum Tower Hospital.

Preoperative clinical data and operation information were retrospectively reviewed from our HCC database, including age, gender, serum hepatitis B surface antigen (HBsAg), Child-Pugh grade, ICG-R15, BCLC staging, serum alanine aminotransferase (ALT), serum aspartate aminotransferase (AST), gamma glutamyl transpeptidase (GGT), alkaline phosphatase (AKP), serum total bilirubin (TB), direct bilirubin (DB), serum albumin (ALB), alpha-fetoprotein (AFP), platelet count (PLT), international normalized ratio (INR), type of operation, operation time, blood loss and blood transfusions (Table 1). Anatomical resection was charactered as any type of complete excision at least one segment based on Couinaud’s classification, including segmentectomy, sectoriectomy and hemihepatectomy. Non-anatomical resection was defined as local resection or enucleation without regard to the Couinaud’s segmental and sectoral structure. MVI was evaluated based on all the liver slices of resected specimens. MVI was defined as the invasion of tumor cells in a portal vein, hepatic vein, or a large capsular vessel of the surrounding hepatic tissue, partially or totally lined by endothelial cells that were visible only on microscopy [19]. The extent of tumor differentiation was evaluated as well, moderate and poor according to Edmondson-Steiner grading system [35].

Patients were followed up systematically by the levels of AFP, liver function and abdominal ultrasonography every 2 month after discharge. Contrast-enhanced computed tomography (CT) or enhanced magnetic resonance imaging (MRI) was performed every 4 months. Recurrence should be confirmed by at least two imaging modalities, such as CT and MRI. The time to recurrence, site of recurrence and number of recurrence were recorded. The site of recurrence was divided into intrahepatic and extrahepatic recurrence. Intrahepatic recurrence was divided into recurrence at surgical margin, ipsilateral hemiliver and contralateral hemiliver. The number of recurrence was divided into solitary and multiple. If the recurrence was detected, further treatment such as second hepatectomy, local ablation, transcatheter arterial chemoembolization (TACE), or other therapeutic modalities, including molecular targeted therapy would be undertaken. Overall survival was defined as the time interval between the operation and the date of the death. Recurrence-free survival was defined as the period after the operation when a recurrence could be detected. Follow-up data were collected until December 31, 2015.

Categorical data were compared by the chi-square test or Fisher’s exact test. The survival analyses were performed according to the Kaplan-Meier survival curves and compared by the log-rank test. Prognostic risk factors were analyzed by univariate and multivariate Cox proportional hazards models. The predictors for MVI were identified by univariate logistic regression analysis. Subsequently, the significant predictors (P < 0.10) were evaluated by multivariate logistic regression analysis to identify the valuable independent predictors for MVI. The assigning score of each predictor was determined according to the β coefficient in multivariate logistic regression model [36]. The cut-off value of predictive score was calculated by receiver operating characteristic (ROC) curve. The sensitivity, specificity, positive predictive value (PPV) and negative predictive value (NPV) were calculated. For all tests, P < 0.05 were considered statistically significant. Statistical analysis was performed using SPSS version 21.0 (SPSS Inc., Chicago, IL).

We thank the whole multiple disciplinary team (MDT) in hepatobiliary cancer for their guidance in this study.