We analyzed the role of ABCG2, a drug transporter, in determining the sensitivity of glioma stem cells (GSCs) to demethoxycurcumin (DMC). We first demonstrated that ABCG2 is more highly expressed in GSCs than primary astrocytes. Modulation of ABCG2 levels in GSCs by transfection of ABCG2 shRNA or a lentiviral vector encoding ABCG2 revealed an inverse relation between ABCG2 levels and DMC-induced GSC growth inhibition. Suppressing ABCG2 increased DMC-induced apoptosis and G0/G1 cell cycle arrest in GSCs. It also increased levels reactive oxygen species (ROS) in GSCs treated with DMC, resulting in increased cytochrome C and caspase-3 activity. When GSCs transfected with ABCG2 shRNA or overexpressing ABCG2 were xenografted and the tumor-bearing, immunodeficient mice were treated with DMC, ABCG2 expression suppressed the tumor proliferation rate (T/C %). These findings demonstrate that ABCG2 expression is critical for DMC resistance in GSCs and is a potential therapeutic target for GBM.

Glioma stem cells (GSCs) are responsible for the recurrence of glioblastoma multiforme (GBM) and insensitivity to Temozolomide (TMZ), the first-line drug for GBM treatment. GBM is an aggressive type of malignant glioma with very low 2- and 5-year survival outcomes [1]. There are no effective agents to treat GSCs and the efficacy of adjuvant therapy is limited. TMZ is a 3-methyl derivative of mitozolomide that forms O6-methylguanine, which inhibits GBM cell proliferation and induces apoptosis and autophagy in glioma cells [2]. However, TMZ is ineffective in inhibiting GSC proliferation and inducing their apoptosis [3]. Fueyo et al. suggested that O6-methyl guanine -DNA methyl transferase (MGMT) was responsible for resistance of glioma cells to TMZ and therefore MGMT expression formed the basis for clinical treatment strategies. However, recent studies showed that drug resistance in GSCs was related to ABCG2 and not MGMT [4]. This suggested that the mechanisms of drug resistance in glioma cells and GSCs were different.

Demethoxycurcumin (DMC) is a major component of Curcuma longa L, which effectively inhibited proliferation and induced apoptosis in GSCs in vitro [13]. However, its mechanism of action is not fully understood. Therefore, in the current study, we investigated the role of ABCG2 in the chemoresistance of GSCs to DMC and if its downregulation improved therapeutic efficacy of DMC in a mouse xenograft model.

Previous research showed that 40-50% WHO III and WHO IV glioma tissues and 100% U251 GSCs overexpressed ABCG2 [11, 12]. Hence, we analyzed ABCG2 expression in primary astrocytes and GSCs by RT-PCR and western blotting. As shown in Figure 1A and 1B, we observed high mRNA and protein expression of ABCG2 in the primary GSCs and no expression in the primary astrocytes. Further, immunohistochemical staining of GSC spheres (Figure 1C) and flow cytometry analysis showed that more than 97% GSC sphere cells were ABCG2-positive (Figure 1B). These results demonstrated that ABCG2 was highly expressed in the GSCs and probably played an important role in their function. 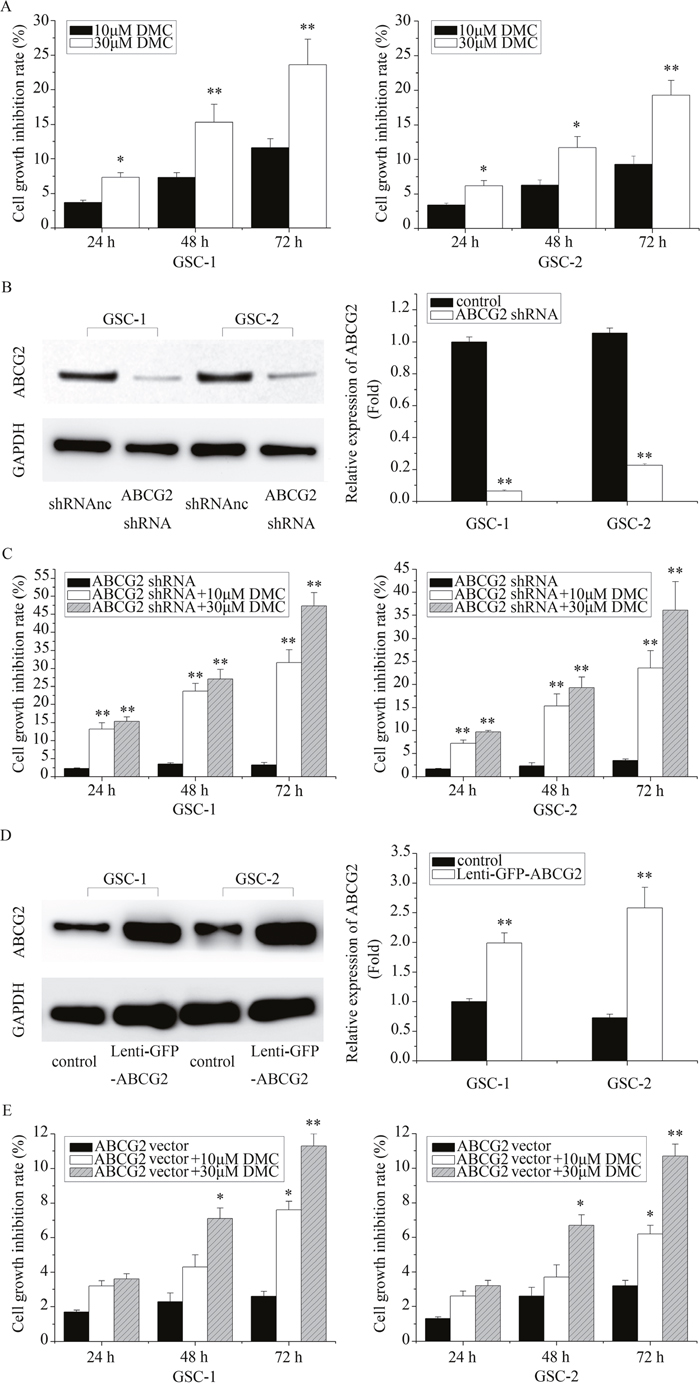 Further, we investigated if ABCG2 expression influenced DMC-induced GSC growth inhibition. Towards this, we transfected GSCs with lenti-GFP-ABCG2 shRNA and determined that ABCG2 was significantly downregulated in GSCs (Figure 2B). Then, we tested the inhibitory efficiency of DMC in ABCG2 knockdown GSCs. As shown in Figure 2C, treatment of ABCG2 knockdown GSCs with 10μM DMC showed growth inhibition of 13.2%, 23.7% and 31.6% for GSC-1 and 7.2%, 15.3%, and 23.6% at for GSC-2 at 24, 48 and 72h, respectively. When treated with 30μM DMC, the ABCG2 knockdowns GSC1 and GSC-2 showed a growth inhibition rate of 15.3%, 27.1%, and 47.3% and 9.7%, 19.3% and 36.1% at 24, 48, 72 h, respectively. Conversely, we transfected GSCs with ABCG2 overexpressed vector (lenti-GFP-ABCG2) and tested the growth inhibition effects of 10 or 30μM DMC in GSC-1 and GSC-2. As shown in Figure 2D, we observed increased resistance to DMC in ABCG2 overexpressed GSC-1 and GSC-2 compared to the controls. Collectively, these data suggested that ABCG2 expression levels inversely correlated with DMC efficacy in inhibiting GSCs. 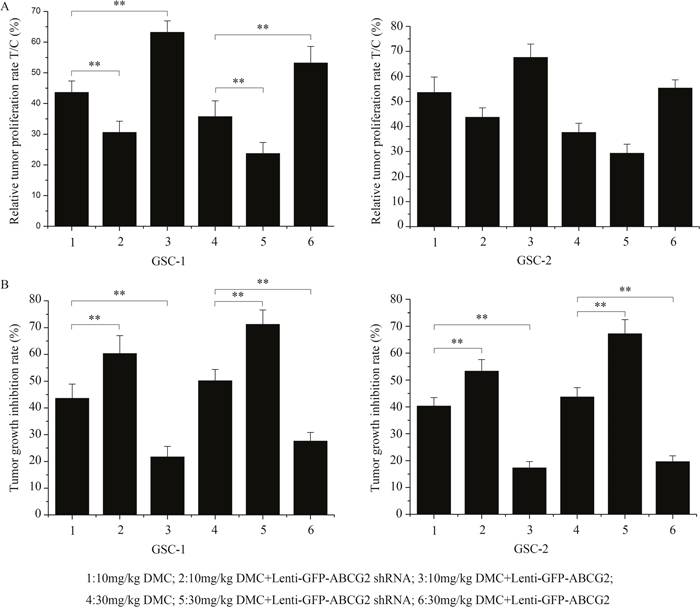 Figure 3: In vivo effects of DMC on GSCs with low or high ABCG2 expression. Balb/c nude mice were xenografted with GSCs that were transfected with either lenti-GFP-ABCG2 shRNA or lenti-GFP-ABCG2 to downregulate or overexpress ABCG2 in GSCs, respectively. After 30 days, the mice were administered 10mg/kg or 30mg/kg DMC for 30 days. Then, relative tumor proliferation rates T/C % (A) and the tumor growth inhibition rates (TGI %) (B) were calculated. 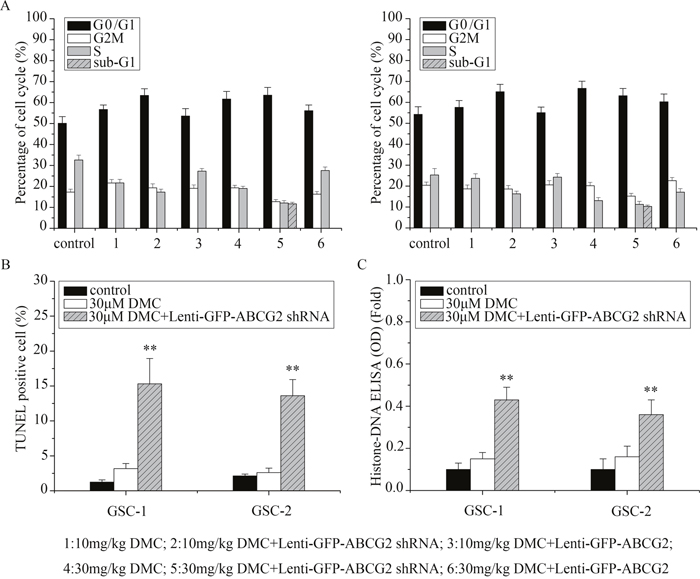 Recently, Shen et al. reported that ABCG2 protected against oxidative stress by decreasing ROS generation and enhancing antioxidant capacity [14]. Also, Oliva et al showed that low ROS production and tighter mitochondrial coupling influence chemo-resistance to TMZ in glioma [15]. Further, we previously showed that DMC inhibited ROS production [13]. Thus, we postulated that the higher ROS production would increase the inhibitory activity of DMC in ABCG2 downregulated GSCs. As shown in Figure 5A, 30μM DMC treatment enhanced ROS in ABCG2 downregulated (Lenti-GFP-ABCG2 shRNA) GSCs compared to control. In contrast, when GSCs with ABCG2 overexpression were treated with 30μM DMC, ROS levels were lower than the control. These results suggested that overexpression of ABCG2 increased antioxidant capacity of GSCs to DMC whereas downregulation of ABCG2 decreased the antioxidant capacity to DMC. 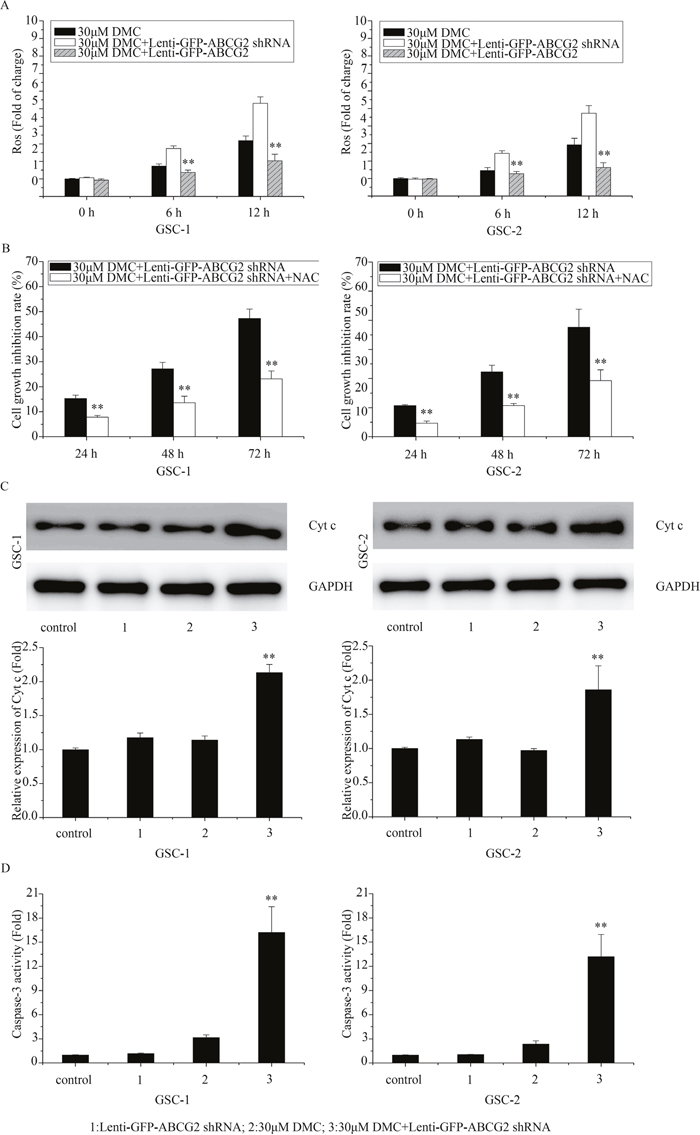 Further, we treated ABCG2 downregulated GSCs with the antioxidant N-acetyl-L-cysteine (NAC) to block increased ROS induced by 30μM DMC treatment and observed that it resulted in decreased cell growth inhibition rate suggesting that ABCG2 expression modulated ROS levels that were necessary for growth inhibitory effects of DMC on GSCs (Figure 5B).

Curcuminoids are yellow and slightly acidic diarylheptanoids that include curcumin and its derivates demethoxycurcumin (DMC) and bisdemethoxycurcumin (BDMC) [21]. All three curcuminoids inhibit tumor cell division and proliferation, with BMDC showing strongest biological activity. However, recent studies have shown that DMC is most effective against gliomas [22]. Many studies have reported that the three monomers of curcuminoids reverse the overexpression of ABC transporters including ABCB1, ABCG2, and ABCC1 in drug resistant tumor cells without causing systemic toxicity [23, 24]. In our previous research, we demonstrated that DMC potently inhibited proliferation and induced apoptosis of GSCs [25]. Thus, we postulated that ABCG2 was involved in drug resistance of GSCs to DMC.

To explore the role of ABCG2 on modulating the chemosensitivity of GSCs, we downregulated or overexpressed ABCG2 in GSCs and tested the effects of DMC in vitro and in vivo. We observed that ABCG2 was overexpressed in most of CD133+ GSCs and its downregulation resulted in increased inhibition of GSC proliferation and enhanced apoptosis by DMC. In contrast, overexpression of ABCG2 in GSCs decreased the sensitivity of GSCs to DMC. Thus, our data demonstrated that ABCG2 represented a more attractive therapy target for GSC chemotherapy.

However, the molecular pathways involved in DMC-induced ROS that result in cancer cell apoptosis have remained unclear. Recently, Shen et al. found that ABCG2 played a protective role against oxidative stress by decreasing ROS generation and enhancing antioxidant capacity in Alzheimer’s disease [30]. They showed that ABCG2 overexpression inhibited ROS activation, protected cells from ROS-induced toxicity/death, and the downregulation of ABCG2 lead to increased ROS and inflammatory response. Also, ABCG2 exported cytosolic oxidative molecules and reduced overall cellular oxidative capacity. Thus, we postulated that the selective increase of cellular antioxidant capacity may be one of the possible mechanisms by which ABCG2 protected GSCs against DMC. Our data demonstrated that either upregulation or downregulation of ABCG2 in GSCs resulted in lower or higher levels of ROS, respectively, confirming our hypothesis. Therefore, our study demonstrated that DMC induced oxidative stress in cancer cells and ABCG2 overexpression decreased ROS, thereby reducing the efficacy of DMC in GSCs. We demonstrated that knockdown of ABCG2 restored high ROS levels and therefore enhanced sensitivity of GSCs to DMC. Ding et al reported that increased ROS resulted in extensive oxidative DNA damage that upregulated pro-apoptotic Bax and cleaved caspase-3, implying that increased ROS activated caspase-3 signaling [31]. Therefore, we analyzed the expression of Bax, Cyt c and caspase-3 and confirmed that DMC treatment in GSCs with ABCG2 knockdown increased Cyt c levels and caspase-3 activity whereas GSCs with ABCG2 overexpression decreased Cyt c levels and caspase-3 activity during DMC treatment.

In summary, we demonstrated that modulating the expression of ABCG2 altered the efficacy of DMC therapy on GSCs by regulating ROS production and thereby influencing the caspase-3- apoptotic pathway. Hence, ABCG2 is critical for DMC resistance in GSCs and is a potential therapeutic target for GBM.

Human glioblastoma tissues were obtained after informed consent from 2 adult patients diagnosed with WHO grade IV glioma. Primary glioblastoma cell cultures were obtained after mechanical dissociation according to the protocol described by Darling et al [32]. The cells were subcultured in DMEM with 2% fetal calf serum (FCS) to prevent the growth of contaminating rodent fibroblasts for 1 week after which the cells were cultured in 10% FCS and antibiotics of Penicillin and Streptomycin. Glial origin was confirmed by morphology and staining with the anti-glial fibrillary acidic protein (GFAP) monoclonal antibody (mAb) clone 6F2 (Dako, Glostrup, Denmark). All experiments on these cells were performed before passage 5.

Cultured primary astrocytes were generated from a slightly injured brain tissue fragment obtained after consent from a patient with cerebral trauma. The grey matter was dissected and dispersed repeatedly after washing in PBS. Primary astrocytes were cultured according to the protocol described by Darling et al [32].

To assess the effects of TMZ and/or DMC, 5x103 CD133+ GSCs/well were plated in 96-well plates with six replicate wells at the indicated concentrations of TMZ and/or DMC for 12, 24, 36, 48 and 72 h, respectively. MTT assay was performed to analyze the cell proliferation as described previously [10].

CD133+ cells that were treated with TMZ and/or DMC were trypsinized and subsequently fixed with 70% ice-cold ethanol for 1h. After PBS washing, the cells were stained in HBSS containing 50μg/ml Propidium Iodide (PI) (Sigma-Aldrich) and 50μg/ml of RNase A (Boehringer Mannheim, Indianapolis, IN), for 1h at room temperature, and analyzed by FACScan (Becton-Dickinson, San Jose, CA). The cell cycle analysis was performed by ModFit LT software [11, 12].

For TUNEL analysis, cells that were treated with DMC and/or ABCG2 shRNA for 24 and 48h were fixed with 4% paraformaldehyde for 30 min before incubating with In Situ Cell Death Detection Kit, Fluorescein (Roche, Palo Alto, CA). Cells were analyzed and enumerated by fluorescence microscopy [13].

The Cell Apoptosis ELISA Detection Kit (Roche, Palo Alto, CA) was used to detect Histone-DNA in GSCs after different treatments according to the manufacturer’s protocol. Also, the PathScan® Phospho-Stat3 (Tyr705) Sandwich ELISA kit was employed to detect p-STAT3 (Cell Signaling Technology Inc., Danvers, MA) according to the manufacturer’s protocol. Briefly, after indicated treatments, cells from different samples were lysed in ice-cold lysis buffer and bound to the immobilized first detection antibody on the ELISA plates. Subsequently, the peroxidase-conjugated secondary antibody was added to each well. After adding the peroxidase substrate, the Histone-DNA and p-STAT3 levels were determined spectrophotmetrically at 405 and 450 nm, respectively.

To quantitate ROS in GSCs, cells were loaded with 1μM fluorescent dye dihydrorhodamine for 2h before drug treatments. After the drug treatments, GSCs were suspended in PBS on ice, fixed by 70% Ethanol at -20°C and analyzed by FACS.

All authors have declared the sources of research funding for this manuscript and have no financial or other contractual agreements that might cause (or be perceived as causes of) conflicts of interest.

25. Buranrat B, Senggunprai L, Prawan A, Kukongviriyapan V. Simvastatin and atorvastatin as inhibitors of proliferation and inducers of apoptosis in human cholangiocarcinoma cells. Life Sci. 2016; 153:41-9.