Spindle cell carcinoma (SpCC), also called sarcomatoid carcinoma, is a relatively uncommon and it has histologic, cytologic and molecular properties of both epithelial and mesenchymal tumors [1, 2]. Thus, it presents heterogeneous pathologic features, clinical behavior and prognosis [3–5]. In the past, it was easily be misdiagnosed because of the unfamiliarity. Nowadays, sophisticated pathologic molecular techniques has made the diagnosis of SpCC reliable [6].

For SpCC, there is no standard treatment protocol available from previously published studies. Treatment modalities of SpCC has varied across previous reports [7, 8]. Although the mainstay treatment for SpCC is surgery, it varied from local excision to radical surgery [5, 7, 9]. The addition of radiotherapy or chemotherapy to treatment protocol has also varied. In most cases, radiotherapy and chemotherapy were added after surgery considering various common cancer adverse prognostic factors such as unconfirmed surgical margins, poor pathologic differentiation and advanced tumor stage etc [8, 10–12].

Regarding general demographics, basic clinico-pathologic features, management strategies and prognosis, there is lack of instructive data to guide SpCC management and to evaluate prognosis, owing to the rarity of the disease. We assume that a nationwide population-based cohort may provide an opportunity to evaluate trends in overall demographic features, basic clinico-pathologic characteristics and compare treatment modalities and outcome of SpCC. Thus, we performed a generalized investigation of all SpCC cases registered in the Surveillance, Epidemiology, and End Results (SEER) from 1973 to 2016.

A total of 2336 cases with diagnosis of SpCC were found in the SEER database from 1973 to 2016. The median follow-up time was 32.5 months (range, 1-437 months). Gender distribution was nearly equal including 1191 men and 1145 women. Majority of SpCC occurred in white people (83.13%, 1942/2336). A peak incidence occurred during the seventh decade of life. SpCC could be found in almost any site of the body. However, one third of SpCC originated from respiratory system. The age and site distribution are shown in Figure 1. The basic demographic and clinico-pathologic characteristics of the whole cases are summarized in Table 1. 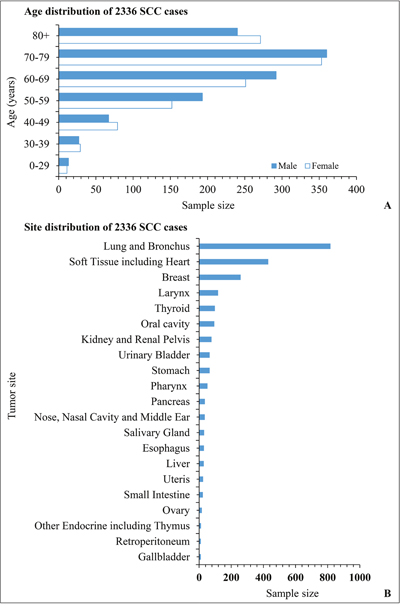 Figure 1: The distribution of age (A) and primary tumor location (B) of all SpCC cases registered in the SEER database.

Table 1: The basic demographic and clinico-pathologic characteristics of SpCC patients 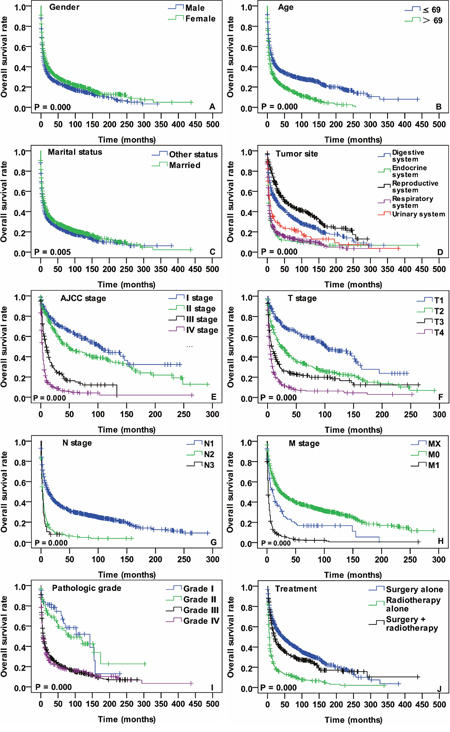 There were 1793 cases available for diseases specific survival (DSS) analysis in the total cases. The median follow-up time was 34.2 months (range, 1-381 months) for these cases. Nearly two fifths of cases occurred in the respiratory system (38.2%, 685/1793). The median age was 69 years and cases with age ≤ 69 years account for 52%. The early AJCC stage cases (stage I + II) were 391 and advanced stage (stage III + IV) cases 482. Most of the cases were pathologically poorly differentiated or undifferentiated carcinoma. Nearly one third of the cases were treated by surgery alone. The detailed demographic and clinico-pathologic characteristics of SpCC cases with DSS status are presented in the Table 1. 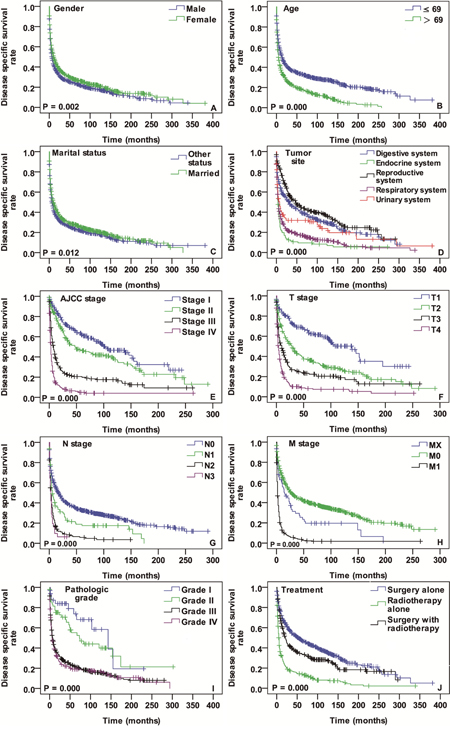 Except for sporadic case reports and small retrospective case series, there is no adequate data to describe SpCC demographics [13]. Current study results demonstrate a peak incidence of SpCC in the seventh decades of life and the male-to-female ratio is almost 1:1 without predominance in any gender. The typical incidence of SpCC was from fifth to seventh decades in majority of the previous reports [3–5]. The most studies about SpCC are based on single-center experience and their study population is less than fifty cases. Because of the small sample size, those studies are often not sufficiently powerful to find considerable differences in survival analysis regarding to general demographic parameter such as age, gender, etc. In this survival analysis, remarkable differences were identified in both age and gender regarding DSS and OS (Figures 2A, 2B, 3A and 3B). One of the most important findings in SpCC demographics is that age is an independent prognostic indicator for DSS and OS.

More than one thousand reports are available about SpCC with variety of tumor location in the PubMed to date. Well consisted with previous reports, SpCC almost occur at any site of the body in present investigation. For better characterization, the tumor locations were categorized into five groups according to the distribution of primary tumor site: (a) respiratory system, (b) digestive system, (c) endocrine system, (d) reproductive system and (e) urinary system. In the survival comparison of these five groups, significant survival differences were found in both DSS and OS (Figures 2D and 3D). The endocrine system, respiratory system and urinary system were unfavorably associated with DSS and OS of SpCC patients (Digestive system - as a ref) in univariate Cox model. Furthermore, the respiratory system (Digestive system - as a ref) was another adverse independent prognostic indicator not only for DSS but also for OS.

Much like other carcinomas, the AJCC staging of SpCC is a valuable tool for physicians in treatment planning and prognosis evaluation [14]. The AJCC staging data of SpCC was incomplete and two thirds of them were missing in the SEER database. Survival analysis was performed with available data. There were typical survival differences in T stage, N stage, M stage and AJCC stage (Figures 2 and 3). Among them, only N stage and AJCC stage were independent prognostic parameters for DSS and OS of SpCC (Table 3).

It has been widely investigated and recognized that SpCC has worse prognosis than SCC [15]. Intrinsic tumor properties and lack of standard treatment guidelines may be the possible explanations for the unfavorable prognosis. However, SpCC showed site specific prognosis [16–18]. In this study we compared obtainable treatment modalities (Figures 2J and 3J). The results demonstrate that the surgery alone group had better DSS and OS than radiotherapy alone and surgery combined with radiotherapy group. Although this is not a standardized treatment comparison, it likely indicates that radiotherapy alone is the least option for SpCC treatment. Besides, it is difficult to draw firm conclusion that SpCC patients cannot benefit from radiotherapy according to the results in this study because there were many other confounding factors, such as unclear surgical margin, advanced tumor stage, pathologic grade, etc. Therefore, it is urgently necessary to reassess the effectiveness of radiotherapy for SpCC with multi-center well-controlled studies.

A few limitations of SEER registry and current investigation itself should be acknowledged. Firstly, not all cases have complete information, data on important parameters such as treatment modalities, pathologic grade and TNM/AJCC stage are incomplete. Secondly, due to the lack of chemotherapy data, the role of chemotherapy for SpCC could not be established. Thirdly, the median follow-up time was 32.5 months for OS and 34.2 months for DSS. The relatively short follow up time may not reveal longterm survival differences. Lastly, the retrospective nature of current investigation may have introduced bias into the overall analysis.

In conclusion, the main interest of this study is to give audience concise and generalized information about SpCC. Thus, we did not demonstrate many possible subgroup analysis and develop detailed discussions. Although SEER database are capable of providing the largest data about SpCC, those available date is still incomplete. Despite the limitation of the incomplete data and study itself, the present investigation is the first of its kind with the largest study population from multiple centers to define the overall demographic trends, basic clinico-pathologic characteristic, management and prognosis of SpCC. The investigation results demonstrate that SpCC mostly occurred at 70~80 years old in white people and sex distribution was almost equal. The patient’s age, primary tumor location, N stage and AJCC stage were independent prognostic indicators for both DSS and OS.

International Classification of Diseases for Oncology codes (ICD-O-3) for spindle cell carcinoma (8032/3) was used for identification of cases with a diagnosis of SpCC registered in the SEER database and SEER*Stat software, version 8.3.2, was applied for data extraction.

For statistical analysis, the following demographic and clinico-pathologic parameters were selected: age, gender, race, marital status, primary tumor site, American joint committee on cancer (AJCC) stage, pathologic grade, treatment modality, follow-up time and outcome status. Not all of the cases that we identified contained all these data. Statistical analysis was performed by using the software of the Statistical Package for Social Sciences, version 23.0, for Windows (SPSS, Chicago, IL). Differences in the numerical parameters were evaluated by using the Student’s test or non-parametric Wilcoxon test and the chi square test or Fisher exact test was used for categorical variables comparison. The survival curves were generated by using the Kaplan-Meier method, and the log-rank test was performed to evaluate the survival difference. Adjusted hazard ratios (HRs) along with 95% confidence intervals (CIs) were calculated by using the Cox proportional hazards regression model. When the P-value was < 0.05, the difference was regarded as statistically significant. All statistical tests were two tailed.

We are grateful to Dr. Kamila Abulimiti (MD) from Strayer University (USA) for checking the English of the manuscript.

This study was supported by The Scientific Research Foundation of Shanghai Stomatological Hospital, Fudan University (SSDCZ-2016-01).

6. Lee AH. Recent developments in the histological diagnosis of spindle cell carcinoma, fibromatosis and phyllodes tumour of the breast. Histopathology. 2008; 52:45-57.