CyclinD1 and p57kip2 as biomarkers in differentiation, metastasis and prognosis of gastric cardia adenocarcinoma

1The First Affiliated Hospital, and College of Clinical Medicine of Henan University of Science and Technology , Luoyang, Henan 471003, China

In many parts of northern China, gastric cardia adenocarcinoma (GCA) is a common cancer disease [1]. In recent years, studies have continuously revealed that GCA is a malignancy that differs from esophageal malignancy [2]. Furthermore, the regional distribution of GCA is different from gastric and esophageal cancer [3]. Hence, these should be studied as an independent disease. Tumors can be caused by cells that have unlimited autonomous division and proliferation. Normal cell division, proliferation, differentiation and aging maintain the stability of the body. Disorder in cell cycle progression can lead to a chaotic process. The regulation of different checkpoints in cell cycle progression is recognized as the cell cycle regulation mode. The most important checkpoints of the cell cycle are G1/S and G2/M, as well as the junction of the mitotic metaphase/anaphase. An uncontrollable checkpoint would lead to the manifestation of a tumor, and almost all functions of oncogenes and cancer suppressor genes are correlated to cell cycle. As a member of the cyclin-dependent kinases inhibitors (CDKI) and a negative regulatory factor in cell cycle, p57kip2 may interfere with cell cycle progression via blocking the progression in the G1 phase, exerting an anti-tumor effect [4]. Instead, as a positive regulator of cell cycle progression, cyclinD1 overexpression may accelerate G1/S progression, accelerating cell proliferation [5].

In our study, real-time fluorescence qualitative polymerase chain reaction (PCR), immunohistochemical and western blot assays were employed to detect the expression of p57kip2 and cyclinD1 in GCA tissues and its adjacent non-cancerous tissues. The study aimed to investigate the status and significance of p57kip2 and cyclinD1 in the occurrence and development of GCA, and explore the potential mechanisms of the inhibitory effect of p57kip2 on GCA. Our findings may provide markers for the diagnosis, treatment and prognosis of GCA; which would be beneficial for developing strategies to improve the diagnosis, treatment and prognosis of GCA. 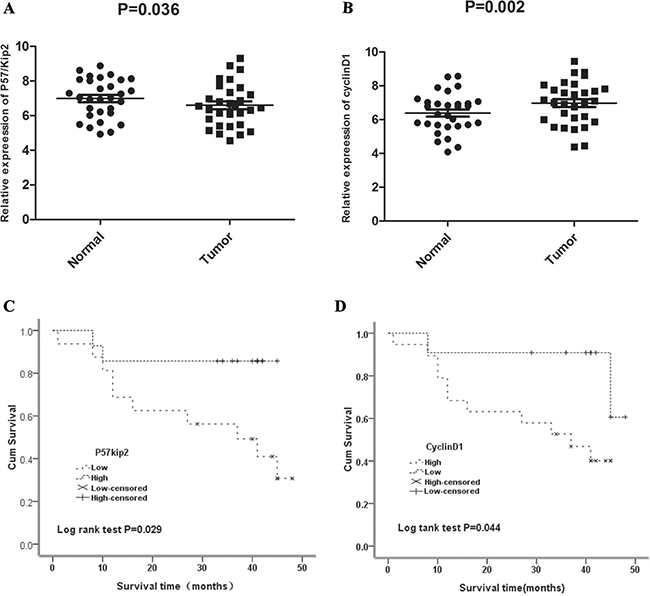 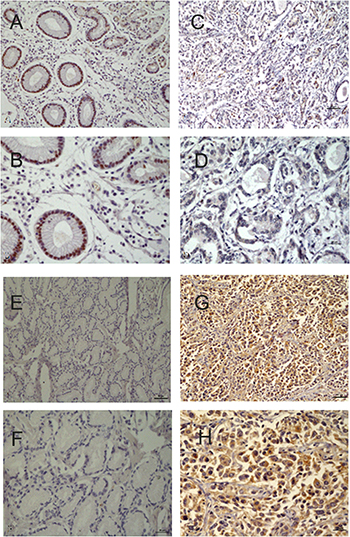 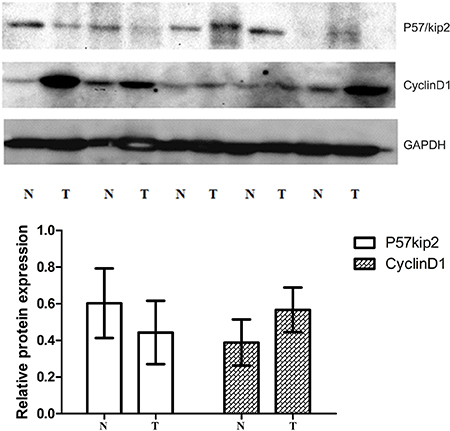 Table 1: Correlation of mRNA expressions of p57Kip2 and CyclinD1 with clinicopathological features of GCA

Table 2: Correlation of protein expressions of p57Kip2 and CyclinD1 with clinicopathological features of GCA

The correlation between p57kip2 and cyclinD1 protein expression in GCA

Table 4: Univariate and multivariate analysis of different prognostic factors for OS in 32 patients with GCA

Cancer is an outcome of the cooperation and interaction of multi-factors, and its progression involves multiple genes and multiple steps. This is true for GCA. Recurrence and metastasis are major problematic issues that threaten human health. More investigators continue to propose that conjoint multi-markers analysis would be superior to one marker in predicting the cancers prognosis. With the development of biotechnology, increasing genes that may promote or inhibit cancer development have been identified. Therefore, exploring the correlation between genes that play a role in inhibiting or promoting cancer development is important for predicting the prognosis and treatment efficacy of cancers in clinic.

P57kip2 is a tumor metastasis suppressor. The deficiency or downregulation of p57kip2 expression have been observed in multiple cancers including lymphomas [7], gastric cancer [8], pancreatic cancer [9], breast cancer [10], bladder cancer [11], and prostate cancer [12]. In most tumors, the main means that lead p57kip2 to inactivate were reported as modifications after transcription and translation. The lack and loss of heterozygosity, DNA methylation and histone acetylation, microRNAs, many signal transduction pathways and phosphorylation, and ubiquitination in the regulation of p57kip2 expression promote the malignant biological behavior of cancer cells [13–17]. The inhibitory activity of cyclin/CDK depends on the amino terminal domain and the nuclear localization signal (NLS) at the carboxy terminal, they were CDK binding/inhibitory region. In contrast, CIP/KIP proteins exhibit divergent carboxy terminal domains. Human p57kip2 and p21CIP1 has a proliferating cell nuclear antigen (PCNA) binding domain required for inhibiting DNA replication [18]. What's more, extracellular factors such as TGF-β, IGF-1 and pituitary adenylate cyclase-activating peptide [19–21], and transcription factors such as CTIP2 and HES1 [22, 23], which are known to play important roles during corticogenesis, regulate the positive or negative expression of p57kip2. Shin revealed that p57 serves as a tumor suppressor in GCA [8]. However, the functional role of p57 in GCA remains unclear. Our results determined that p57kip2 can serve as a tumor suppressor in GCA. Furthermore, our results revealed that the mRNA and protein expression of p57kip2 were consistent. The p57kip2 expression in GCA was markedly lower than in adjacent non-cancerous tissues. In addition, p57kip2 expression was different in patients with different degrees of differentiation. That is, the expression of p57kip2 in patients with poorly differentiated GCA was significantly lower than in patients with well-differentiated GCA. These findings suggest that the more invasive capabilities are, the lower the p57kip2 expression becomes. However, there was no marked difference in p57kip2 expression between genders, patients in different age groups and in different clinical stages. Furthermore, there was no marked difference among patients with or without stomach diseases, and patients with or without a family history of cancer. The survival curve analysis revealed that patients with high mRNA expression of p57kip2 had a median survival time of 41 months, which was longer than in patients (34 months) with high mRNA expression of p57kip2. (X2 = 4.788, P = 0.029).

Between January 2012 and March 2014, 32 patients with GCA were recruited from the Department of Thoracic Surgery in the First Affiliated Hospital of Henan University of Science and Technology. These patients received operative treatment, and GCA was pathologically confirmed. All patients did not receive radiotherapy and chemotherapy before surgery, and had complete clinical, pathological and follow-up data. Among these patients, 30 patients were male and two patients were female; and the median age of these patients was 61.4 years (range: 39-76 years). GCA was classified as highly or moderately differentiated GCA (n = 25), and middle-low differentiated GCA (n = 7). Clinical pathologic staging was performed according to the TNM staging system formulated by the Union for International Cancer Control (UICC, 1997). Clinical staging was performed as a stage < IIIB GCA (n = 15) and as tage ≥ IIIB (n = 17). Additionally, 24 patients were diagnosed with lymph node metastasis, and eight patients had no lymph node metastasis. The follow up period ranged between 1–48 months. The GCA and its adjacent non-cancerous tissues were collected, divided into two groups, and stored in liquid nitrogen.

Total RNA was extracted by TRIZOL Regent kit. UV spectrophotometer was used to determine the concentration of RNA. The first strand of RNA was synthesized with reverse transcription. Fluorescence qualitative PCR was performed in 20-μl mixture (Amplification primers are shown in Table 5), and the conditions as follows: denaturation at 95°C for five minutes, 95°C for 10 seconds, annealing at 60°C (58°C for β-actin, 56°C for p57kip2 and cyclinD1), and extension at 72°C for 20 seconds for 40 cycles. Three wells were used for each group. The 2-ΔΔCT method was used to calculate the expression of p57kip2 and cyclinD1.

The detection of p57kip2 and cyclinD1 protein expression

Western blot Tissues were kept in liquid nitrogen and total protein was extracted with RIPA lysis buffer. The BCA method was used to determine the protein concentration. The protein solution was mixed with a loading buffer, and boiled for use. Then, 50 μg of total protein were loaded for electrophoresis at 20 mA for three hours, and transfer membrane was performed at a constant current for two hours. Next, the membrane was blocked with 5% non-fat milk at room temperature for one hour, and treated with the primary antibody at a ratio of 1:1,000, overnight at 4°C. After washing three times with TBST (for 10 minutes each), the membrane was treated with HRP conjugated secondary antibody at a ratio of 1:3,000 for two hours at room temperature. Then, the membrane was washed three times with TBST (for 10 minutes each), and visualization was performed using an ECL kit. β-actin was used as an internal control.

Statistical analysis was performed using SPSS version 17.0 for Windows. Comparisons between the two groups were performed with t-test. Qualitative data (the expression of p57kip2 and cyclinD1) were analyzed using Chi-square test. Pearson analysis was used to calculate the correlation between clinicopathological features and the expression of p57kip2 and cyclinD1. The survival curve was calculated using the Kaplan-Meier method. Survival time was evaluated using the log-rank test. Univariate analysis and multivariate models were fit using a Cox proportional hazards regression model. A P-value < 0.05 was considered statistically significant.

RY and CXJ carried out the studies and drafted the manuscript. ZZW, ZPF and FSH participated in the design of the study and performed the statistical analysis. GQ, GSG and FXS revised it critically for important intellectual content. All authors read and approved the final manuscript.

We would like to thank all the participants in the studies.

29. Wang X, Zou S. The relationship of CyclinD1 and estrogen receptor expression in the process of proliferation and metastasis in breast neoplasm. J Tongji Med Univ. 2001; 21:231–32.