The optimal time of initiation of renal replacement therapy in acute kidney injury: A meta-analysis

Acute kidney injury (AKI) is increasingly common and associated with adverse clinical outcomes, including excess mortality and morbidity, and prolonged hospital length of stay (LOS) [1–4]. Renal replacement therapy (RRT) is the cornerstone for the treatment of severe AKI. Although RRT provokes a considerable escalation in the complexity of therapy, the optimal timing of initiation of RRT in patients with AKI has been the focus of those debates [5, 6]. Conflicting results from clinical trials and systematic reviews have not resolved the debates, leaving clinicians to select the timing of initiation of RRT based on suboptimal evidence.

Studies aimed at determining the optimal time for starting RRT have evaluated the various arbitrary cut-offs for time from Intensive Care Unit (ICU) admission [7–9] or development of a biochemical “start time” [10, 11], AKI stage [12, 13], serum urea [14, 15], urine output [16, 17], fluid balance [18], and serum creatinine [15, 19, 20]. However, the arbitrary cut-offs often differentiated between early and late RRT. Some data suggested that early compared with late RRT reduced the mortality with better renal recovery. Early initiation of RRT may produce benefits by avoiding hypervolemia, eliminating of uremic toxins, establishing acid-base homeostasis, and preventing other complications such as gastric hemorrhage and metabolic encephalopathy [7, 13, 16]. Late RRT may allow time for the stabilization of a patient’s condition before RRT and may even avoid the RRT [12, 21–23]. Gaudry et al. showed that the mortality was lower in patients who never received RRT than those received RRT early or late (37.1% vs. 48.5% or 61.8%), and the patients with late RRT were the most severely ill at baseline [13]. Thus, we hypothesized that the different severity of illness for patients with AKI who received early RRT may produce distinct effects on mortality. Therefore, we firstly performed a meta-analysis according to the severity of illness for patients with AKI to investigate the opportunity of RRT initiation.

3 earlier meta-analyses (Seabra et al. [24] identified 23 studies, Karvellas et al. [25] identified 15 studies and Wang et al. [26] included 51 trials) showed that early RRT could confer a survival benefit. 11 trials performed before 1985 in Seabra et al. and Wang et al. were excluded, and the addition of 10 recently published studies have been included in the present meta-analysis. However, a recent meta-analysis found no significant difference in mortality between early and late RRT [27], but included only nine “high-quality” studies. Furthermore, the included studies were limited with high heterogeneity. In the present study, we firstly made a definition of early RRT based on time-based cutoffs for patients with AKI to investigate the optimal timing of initiation of RRT. 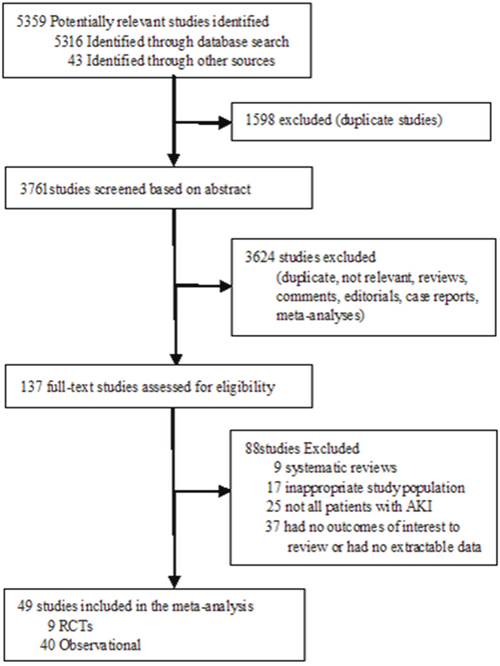 Figure 1: Flow diagram for the selection of studies inclusion in the meta-analysis. 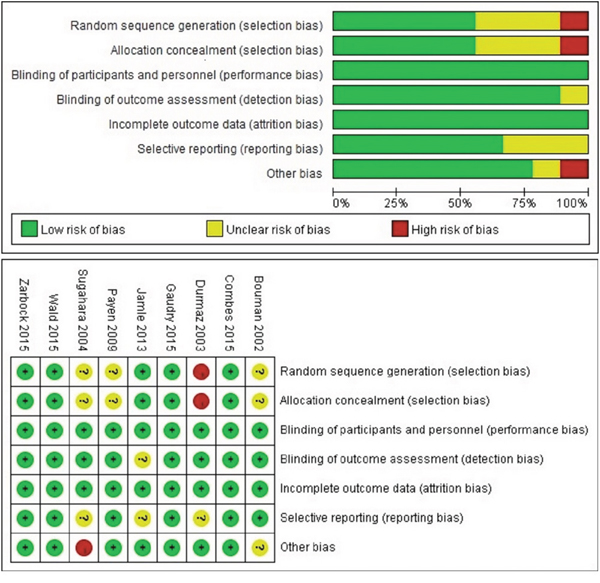 Figure 2: Risk of bias summary of early versus late RRT initiation on mortality in patients with AKI on randomized controlled trial.

Figure 3: Forest plot shows the effect of early versus late RRT on mortality in critically ill (A) and non-critically ill patients with AKI (B).

Statistically similar results were obtained after omitting each study of critically ill patients with AKI, and the results of the sensitivity analyses were robust. Sensitivity analyses showed that Elsevivrs et al. [20] was the main source of heterogeneity for the studies of non-critically ill patients with AKI, and the heterogeneity was significantly decreased by omitting the study. For non-critically ill patients with AKI, there was no statistically significant difference in the risk of mortality between early and late RRT with the study (OR, 1.07; 95% CI, 0.79 - 1.45; I2, 73.0%) or without the study (OR, 1.02; 95% CI, 0.74-1.40; I2, 66.8%). Elsevivrs et al. was a large sample trial with 1303 patients when compared to other articles including not more than 619 subjects (Figure 4).

Figure 4: Sensitivity analyses of early versus late RRT on mortality in critically ill (A) and non-critically ill patients with AKI (B).

With the meta-regression, we did not find a correlation between patient mortality and study design (RCT vs. observational), RRT modality (CRRT, IHD vs. Mixed), study quality score, severity of illness [Sequential Organ Failure Assessment (SOFA) score], ICU admission type (surgical vs. mixed medical admissions). However, we find a correlation between patient mortality and sample size (n ≥ 100 vs. n < 100, P = 0.001) in critically ill patients with AKI.

Figure 5: Begg’s funnel plots of early versus late RRT on mortality in critically ill (A) and non-critically ill patients with AKI (B).

Regardless of the definition of early RRT (according to time criteria or biochemical indicators), ICU admission type (surgical vs. mixed) or RRT modality (CRRT, IHD vs. Mixed), subgroup analyses of critically ill patients with AKI did reveal survival benefits from early RRT. Furthermore, subgroup analyses of non-critically ill patients with AKI showed that no evidence of survival advantage in early RRT.

In the present study, we firstly performed the meta-analysis according to the severity of illness and definition of early RRT based on time-based cutoffs for patients with AKI to investigate the time of RRT initiation. We accepted a broad definition of “critically ill patients with AKI” based on AKI with multiple-organ dysfunction syndrome [60], septic shock [40], RIFLE criteria (failure, loss of function, and end-stage kidney disease) [37, 43, 44], AKIN stages 3 [41, 42, 46] or Kidney Disease: Improving Global Outcomes (KDIGO) stage 3 [12, 61].

By the meta-regression, we found sample size was one of the sources of heterogeneity. In contrast to previous meta-analyses, we found a lower heterogeneity among studies on this topic, especially in the subgroup. We noted those critically ill patients in early RRT within 12 hours (I2, 44.8%), 24 hours (I2, 0.0%), 48 hours (I2, 30.8%), and 72 hours (I2, 48.2%) showed the lower heterogeneities, indicating that the heterogeneity may be partially explained by the definition of early RRT timing. However, we could not account for the observed heterogeneity by meta-regression according to study design, RRT modality, the study quality score, severity of the illness, and ICU admission type. Thereby, the heterogeneity observed is most likely explained by the differences in definitions for early RRT timing, the inability to account for heterogeneity in clinical practice and critical care patterns, many confounding factors that affect the mortality, publication bias, sample size and the inclusion of retrospective, prospective and RCTs.

The present systematic review has some limitations. Firstly, definitions for AKI are to some extent different in the included studies. Secondly, the definition of early RRT based on various arbitrary cut-offs for time, which ultimately downgraded the strength of evidence. Thirdly, there were publication bias and significant heterogeneity in the present study. Many confounding factors affect the mortality, and meta-regression may not be enough to verify this issue. Lastly, the association with mortality is largely dependent on observational studies and might have been affected by allocation or selection bias. Thus, further high-quality RCTs focused on mortality according to the optimal time for starting RRT are necessary to fully understand the effects of early RRT for patients with AKI.

We included studies that evaluated the timing of initiation of RRT in patients with AKI. For the review, early and late RRT were defined based on criteria used by the authors in their studies. early and late RRT were defined as extended time-based cutoffs (arbitrary cut-offs for time from ICU admission or development of a biochemical “start time”), or biochemical indicators [serum creatinine, serum urea, RIFLE (risk, injury, failure, loss of function, and end-stage kidney disease) classifications, Acute Kidney Injury Network (AKIN) stages, urine output, and fluid balance]. Late RRT criteria also included conventional RRT indications (hyperkalemia, acidosis or fluid overload) and expectant care (no RRT initiated). The primary outcome was mortality, and the secondary outcomes were ICU and hospital LOS.

The inclusion criteria were as follows: (1) randomized clinical trials (RCTs) and/or observational cohort studies; (2) studies evaluating the timing of initiation of RRT in patients with AKI with direct effect on mortality; (3) complete data available to calculate odds ratio (OR) or mean difference (MD) with 95% confidence interval (CI); (4) clear definitions of AKI stated. Exclusion criteria were as follows: (1) data from the studies could not be extracted and analyzed; (2) duplicate publications; (3) non-human experimental studies.

The Cochrane Collaboration Risk of Bias tool was used to assess RCTs [62]. This tool consists of 6 domains and assesses 5 specific biases. A judgment of low risk, unclear risk, or high risk was provided for each domain. The Newcastle-Ottawa Scale (NOS) was used in the assessment of quality of cohort studies [63]. NOS quality assessment scale ranges from 0 to 9 stars. The star evaluates 3 main categories: selection, comparability, and outcome.

Statistical analysis was performed using Review Manager (version 5.3) and STATA statistical software (version 12.0). We calculated OR with 95% CI for dichotomous data and MD with 95% CI for continuous data. Statistical heterogeneity of the data was quantified using the I2 test, and the I2> 50% indicated significant statistical heterogeneity. Sensitivity analysis, meta-regression analyses and subgroup analysis were conducted to investigate the potential sources of heterogeneity. Publication bias was assessed by constructing a funnel plot and using the Egger regression test and the Begg rank correlation test. A P value less than 0.05 was considered statistically significant.

63. Stang A. Critical evaluation of the Newcastle-Ottawa scale for the assessment of the quality of nonrandomized studies in meta-analyses. Eur J Epidemiol. 2010; 25:603–05.