Epstein-Barr virus-associated gastric cancer (EBVaGC) has been proposed to be a distinct subtype with a specific immune microenvironment. Here, we evaluated tumor-infiltrating T-cell subsets and the expression of programmed cell death protein 1 (PD-1) and programmed death-ligand 1 (PD-L1) in 571 gastric cancers (GCs).

GC was an immune ignorant dominant tumor and poor to no T-cell infiltration. An immune type classification algorithm can provide prognostic information and a rational basis for immunotherapy.

Epstein-Barr virus (EBV) is a member of the Herpesviridae family that latently infect greater more than 90% of adults worldwide and is associated with several human malignancies, such as Hodgkin's lymphoma, Burkitt's lymphoma, nasal NK/T-cell lymphoma, nasopharyngeal carcinoma and a subset of gastric cancer (GC) [1]. Recently, the Cancer Genome Atlas Research Network published a comprehensive molecular characterization of gastric adenocarcinoma and classified EBV-associated GC (EBVaGC) as a distinct GC type that is characterized by recurrent PIK3CA mutations, extreme DNA hypermethylation, and amplification of JAK2 and programmed death ligand-1/2 (PD-L1/PD-L2) [2]. A meta-analysis demonstrated that the prognosis for EBVaGC was better than that for EBV-negative GC (EBVnGC) [3], although, the underlying mechanisms of this effect are not clear. EBVaGC often features extensive lymphocytes infiltration [4], especially CD8+ (cluster of differentiation 8) T cells, which might have a cytotoxic effect on EBV-positive tumor cells [5].

Patients with CD4+ (p=0.001), CD8+ (p<0.001) and Foxp3+ (p=0.001) cell infiltration exhibited a better 5-year OS (Table 2). Patients with PD-L1 expression had a worse 5-year OS (p=0.042, Table 2), although differences were not observed for PD-1 expression (p=0.364, Table 2 and Supplementary Figure 1). In the above analyses, clinicopathological features were indiscriminate between the groups (Supplementary Table 2). Cox analysis demonstrated that CD8+ and Foxp3+ cell infiltration predicted better survival, whereas PD-L1 expression was a risk factor in the complete cohort (Table 2). In EBVaGC, CD8+ cell infiltration predicted a better 5-year OS ([HR] was 0.18, 95%CI was 0.05 to 0.61, p=0.006. Supplementary Figure 2), whereas other parameters had no such prognostic value (data were not shown). 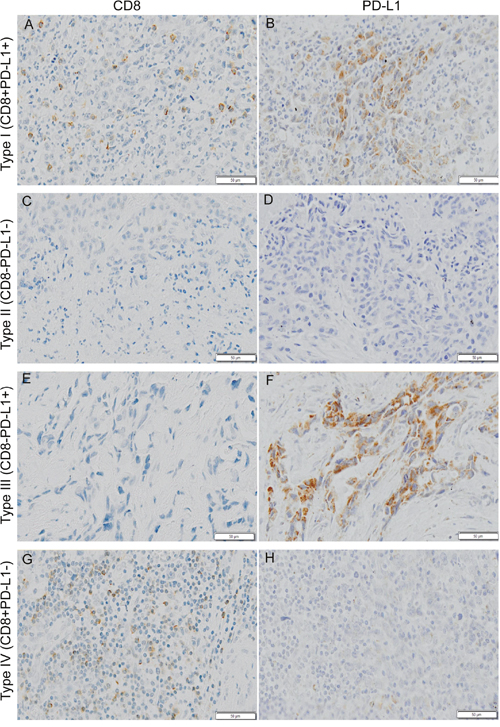 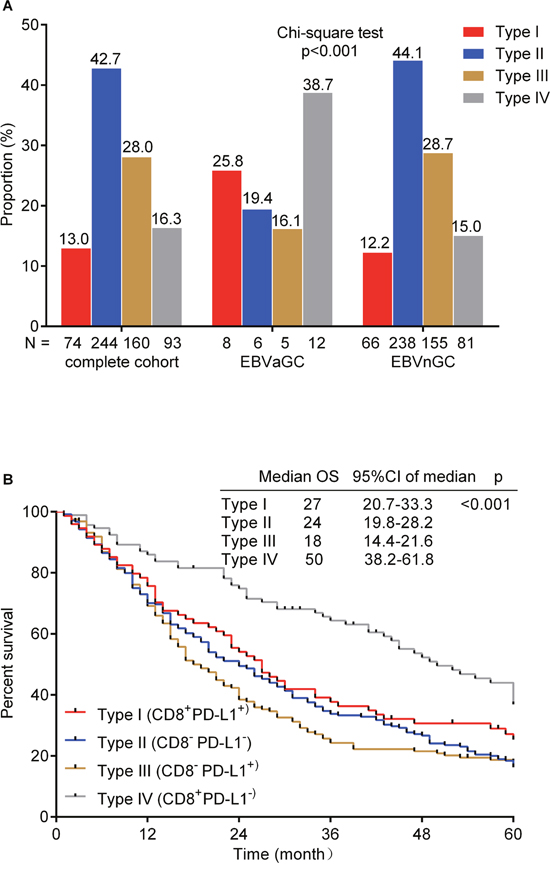 Figure 4: Distribution of the four tumor immune microenvironment types in gastric cancer (A). The number of patients in each cohort (complete cohort, EBVaGC and EBVnGC) is under the X-axis and the proportion of four types in each cohort is labelled above the bar. Chi-square test was used. Kaplan-Meier method log-rank testing for 5-year overall survival (OS) of the four tumor immune microenvironment types (B). The median OS, 95% confidence interval (CI) of median OS and p value are at the top-right corner.

Several studies have demonstrated that EBVaGC has a better clinical outcome which agrees with the results of our study [3, 4, 12]. In our study, EBVaGC was predominantly characterized by CD8+ and Foxp3+ cell infiltration, and in the complete cohort, more frequent infiltration of CD8+ and Foxp3+ cells correlated with a better OS. Therefore, we speculated that the adaptive immune response might have a positive effect on EBVaGC prognosis. EBVaGC displays a latency I/II pattern of EBV gene expression, typically characterized by LMP2 and EBNA1 expression [13, 14]. EBV-associated proteins and some mutated tumor cells proteins can elicit EBV-specific and tumor antigen-specific cytotoxic T lymphocytes, which can eradicate EBV-positive malignant cells [15–17].

PD-1 is expressed on activated T and B cells whereas PD-L1 is generally expressed on many immune cells, including macrophages and dendritic cells, and can be induced by inflammatory cytokines in tumor cells [7]. PD-L1 expression has been observed in various malignancies and is a major factor used to evaluate therapy responses to anti-PD-1 [18–21]. We found relatively more frequent PD-1 expression and comparable PD-L1 expression in EBVaGC compared with that in EBVnGC. Based on CD8+ cell infiltration and PD-L1 expression, EBVaGCs were primarily type I and type IV cancers, suggesting a favorable immune microenvironment, whereas most EBVnGCs were type II and type III cancers, which indicated that most EBVnGCs did not naturally induce effector T-cell responses. Moreover, we demonstrated that type IV GC had the best 5-year OS, which might explain why EBVaGC has a better prognosis, although immune checkpoint blockade has overall been a disappointing GC treatment. Tumor regression after therapeutic PD-1 blockade requires pre-existing CD8+ T cells that are negatively regulated by PD-1/PD-L1 expression [22]. Hence, immune checkpoint inhibitors treatments in type I cancer might partially relieve adaptive immune resistance and exert a positive effect on clinical outcome. Considering the lack of T cell infiltration in type II and type III GCs, a T-cell inducing agent such as a tumor vaccine combined with immune checkpoint inhibitors might improve GC survival.

Our study had several limitations. We had only 32 EBVaGC cases, which restricts T cell subset infiltration and PD-1/PD-L1 expression analysis in this subgroup. We did not find an association between PD-L1 expression and CD8+ cell infiltration, which was observed in other studies, and requires further investigation. Tissue microarray IHC staining as a high throughput technique can facilitate this type of study, but bias might still arise because only a relatively small tissue area was deliberately selected after H&E staining confirmation. Moreover, a tissue microarray with only a 1.5mm diameter was not suitable for quantitative evaluation of lymphocytes infiltrating in tumor and immune stroma, and our results were qualitative. This is a retrospective study, and all of the results are based on formalin-fixed, paraffin-embedded tissue and should be validated on live cells and in clinical trials.

In summary, this study showed that there were more frequent tumor-infiltrating CD8+ and Foxp3+ cells in EBVaGC, which predicted a better OS in this subpopulation. We first categorized GCs into four different tumor microenvironment types based on the presence or absence of CD8+ cells and PD-L1 expression in a large cohort (n=571). EBVaGC and EBVnGC showed heterogeneous immune microenvironments. Approximately 65% of EBVaGCs presented with a type I or type IV microenvironment, suggesting activated adaptive immune responses and a relatively better clinical outcome, whereas more than 70% of EBVnGCs were type II and type III cancers, indicating a lack of immune response and a poor prognosis. A low level of TILs might partially explain the high mortality of GC and restrict the use of antibodies that target immune checkpoints. We hope that this immune microenvironment classification algorithm can provide a rational basis for guiding cancer immunotherapy in future clinical practice.

GC specimens were collected from 608 patients who received primary tumor surgical excision at Xijing Digestive Hospital between Jan 2007 and Jan 2010. All of the patients with primary GCs were included unless they had any of following conditions: previous chemotherapy prior to surgery, longstanding autoimmune disease and/or glucocorticoid treatment, HIV positivity, lymphoma or other sources of gastric metastatic carcinoma. The tissue microarray method was applied (a 1.5-mm diameter column of tissue core). Age, sex, the American Joint Committee on Cancer (AJCC) system for TNM stage (T: depth of tumor invasion, N: lymph node metastasis, M: distant metastasis), tumor location, depth, histological classification and differentiation were assessed.

All patients were followed for 5 years. In analysis, we excluded one gastric lymphoma, and 36 patients were lost at the first follow-up. In the end, 571 patients were analyzed and evaluated.

Tissue microarrays including 608 specimens were used for EBER in situ hybridization (ISH). EBER, a non-coding RNA, is the most abundant RNA in EBV-infected gastric tumor cells. 4μm thick sections were cut, deparaffinized and dehydrated. EBERs in tissue microarrays of primary tumor specimens were hybridized using an Epstein Barr virus Probe ISH Kit, and were detected with the HRP/DAB Detection System (ISH5021, PanPath, Amsterdam, Netherlands) according to the manufacturer’s protocols. Cases with strong signals within tumor cells were considered EBV positive. The results were determined by two independent pathologists. If they did not agree the same, then the third pathologist participated in the decision.

Formalin-fixed, paraffin-embedded tissue microarrays were cut into 4μm thick sections and processed for IHC staining. Sections were deparaffinized and dehydrated with serial passages through changes of xylenes and graded ethanol. All of the microarrays were subjected to hear-induced epitope retrieval for 10 min at 100°C (citric acid sodium citrate solution was used for CD4, CD8, Foxp3 (Forkhead box P3), the pH was 6.0, and universal HIER antigen retrieval reagent was used for PD-L1, Abcam). Endogenous tissue peroxidase was blocked by slide incubation in 3% hydrogen peroxide solution for 10 min at room temperature prior to incubation with blocking serum 30 min at room temperature. Subsequently, the microarrays were incubated with primary antibodies (anti-Foxp3, 1:200, Abcam, which was diluted by antibody diluent, Abcam) overnight at 4°C, 4 hours at 37°C for PD-L1 (10μg/ml, Abcam) and 2 hours at room temperature for CD4 and CD8 with no dilutions. Goat anti-mouse/rabbit secondary antibody and HRP-labeled biotin were used to bind primary antibody. Antigen-antibody binding was visualized via application of 3.3’ diaminobenzidine (DAB) chromogen. PD-1 (Polyclonal Goat IgG, 5μg/ml, R&D) IHC was achieved using the anti-goat HRP-DAB Cell & Tissue Staining Kit (brown, R&D) according to the manufacturer’s protocols. A negative control was obtained by using a normal rabbit/mouse IgG. Stained sections were counterstained with hematoxylin and coverslipped for review.

Tissue microarrays were scanned under ×100 and ×200 magnification using Olympus Soft Imaging Solutions GmbH. The levels of CD4, CD8 and Foxp3 expression were defined as follows: cases were scored at 5% intervals for CD4 and CD8, which meant that specimens with≥5% membranous expression were considered positive. The presence of PD-L1 was estimated according to the same criteria [26]. Positive Foxp3 infiltration is defined by a greater than 1% presence of Foxp3+ cell relative to the total cell number. PD-1 expression was positive when≥1% of lymphocytes showed membrane staining. Based on the presence or absence of CD8+ cell infiltration and PD-L1 expression, tumor immune microenvironment was classified as follows: type I (CD8+PD-L1+), type II (CD8-PD-L1-), type III (CD8-PD-L1+) and type IV (CD8+PD-L1-). The results were determined by two independent pathologists. If they did not agree the same, then the third pathologist participated in the decision.

Categorical data were compared using χ2 test or Fisher’s exact test with a two-sided p value. Bonferroni correction for multiple comparisons was applied when necessary. Age was described using median and minimum/maximum values and analyzed using the Mann-Whitney U test. Survival curves were constructed by using the Kaplan-Meier method and compared by using a log-rank test. Hazard ratios (HRs) and 95% confidence interval (95%CI) for 5-year survival by EBV infection and CD4+, CD8+, Foxp3+ cell infiltration and PD-1/PD-L1 expression were estimated in Cox regression models. Five-year overall survival (OS) was defined from the date of surgery to the date of death from any cause, or to month 60 if the patient is alive. The Cox proportional hazard regression model was used to define independent prognostic biomarkers such as CD4, CD8, Foxp3 and PD-L1 that inversely impacted OS. Statistical analyses and graphics were obtained using SPSS 21.0 software (Chicago, USA) and Graph pad 5.0. A two-tailed p<0.05 was considered statistically significant.

This research was supported by the Excellent Innovative Research Team Project (NO. 81421003) from National Natural Science Foundation of China (NSFC).