Objective: Although driver mutation status is crucial to targeted therapy decision-making in non-small cell lung cancer (NSCLC), due to unavailable or inadequate biopsies, there are still many patients with unknown mutation status. A promising way to solve this problem is liquid biopsy, such as cell-free DNA (cfDNA) in peripheral blood. Additionally, due to the little amount of cfDNA, detecting methods with high sensitivity, specificity and economy are required in clinical practice. Here, we explored the feasibility of Competitive Allele-Specific TaqMan® PCR (CastPCR) detecting driver mutations in cfDNA from plasma in lung adenocarcinoma patients.

Conclusions: For patients whose tumor tissue is unavailable or inadequate, EGFR mutation detection in cfDNA with CastPCR could be first choice. Mutation positive results may provide reference for further clinical medication. While negative results indicate that detection in tissue should be considered as the following step. In this way, tumor tissue could be economized to the maximum extent and the risk of repeated percutaneous transthoracic lung biopsy could also be lowered to the maximum extent. For BRAF detection in cfDNA, CastPCR is a specific method while the sensitivity needs further exploration.

Thanks to EGFR tyrosine kinase inhibitors (EGFR-TKIs), the treatment pattern of metastatic NSCLC has been revolutionized. Patients’ progress free survival, overall response rate and quality of life have been ameliorated significantly [1–7]. However, in clinical practice, detection of driver mutations in tumor tissue is often not enough. First, sufficient tumor tissue is not readily available. For instance, only 35.9% (437/1217) and 20.3% (297/1466) of the advanced NSCLC patients had biopsied tissue that was suitable for testing in IPASS study [1] and INTEREST study [8], respectively. Second, due to heterogeneity, landscape of molecular information can’t be covered with just one or two spots of biopsy [9]. Third, since tumor is evolving under drug therapy, dynamic and real-time monitoring of driver mutations during treatment is required. However, repeated biopsy is not practically feasible in clinical work for its invasiveness and risk. Fortunately, liquid biopsy such as cfDNA from plasma [10–12] has come into the picture. cfDNA originates from apoptosis, necrosis, phagocytosis, oncosis and active secretion of cells [13]. Studies have demonstrated that in cancer patients, cfDNA contains representation of the entire tumor genome [14, 15]. The mutation load was reported higher than 25.0% in one third of mutant plasma samples [13]. There have been multiple publications on cfDNA mutation detection in the last two decades [16–25]. According to Committee for Medicinal Products for Human Use (CHMP) of the European Medicines Agency (EMA) , to predict therapeutic response of Iressa® (gefitinib), the use of circulating tumor DNA obtained from a blood sample has been allowed to assess EGFR mutation status in patients where a tumor sample is not an option[13].Additionally, cfDNA was shown to be useful in dynamic monitoring of acquired resistance and prediction of relapse in various cancers, including NSCLC [26–30]. In clinical practice, methods with high sensitivity, specificity, convenience and economy are required. Development of molecular detection methods such as qPCR based methods, would allow for highly specific analysis of cfDNA [31]. Here, we evaluated the use of CastPCR detecting EGFR mutations (c.2235_2249del, c.2236_2250del, p.T790M, and p.L858R) in cfDNA form plasma in adenocarcinoma patients.

# Mutation results of FFPE was set the gold standard

#Mutation results of FFPE was set the gold standard

As the flourishing development of precision medicine in lung cancer, there is a pressing need for real-time information of clinical specimens, as well as the establishment of a detection platform with convenience, efficiency and economy. With its relative non-invasiveness, high repeatability and real-time dynamic, liquid biopsy is breaking new ground. For the first time, we evaluated the feasibility of CastPCR detecting EGFR and BRAF mutations in plasma cfDNA of a cohort lung adenocarcinoma patients.

EGFR T790M plays a key role in selecting the right patient for third-generation EGFR-TKI [39]. Up to date, U.S. Food and Drug Administration approved Cobas® as the only assay to detect EGFR specific mutations (i.e., exon 19 deletions and exon 21 L858R substitution mutations) in plasma specimens (www.fda.gov). In recent studies that adopted Cobas® testing platform for p. T790M mutation detection, the sensitivity was (51.0%) [40]. In our study, sensitivity detecting p.T790M was 45.0% (9/20). Notably, the specificity and concordance of p.T790M detection was 100.0% (87/87) and 89.7% (96/107), respectively. While in Cobas® the data presented as 77.0% and 61.0%, respectively [40]. Since the PPV and NPV for p.T790M was 100.0% (9/9) and 88.8% (87/98) in our study, for patients who acquire drug resistance to first generation EGFR-TKI, plasma detection of EGFR p.T790M by CastPCR could be first consideration. For those with cfDNA tested positive, third generation EGFR-TKI could be a treatment choice. Similarly, considering the PPV (91.2%, 31/34) and NPV (67.1%, 49/73) of EGFR detection with CastPCR in our study, for patients whose tumor tissue is not enough or unavailable, EGFR mutation detection with CastPCR in cfDNA could be first choice. For those with EGFR mutations in cfDNA, the result may be taken as reference for further clinical medication. While for those detected without EGFR mutations in cfDNA, further detection in tumor tissue is recommended. In this way, tumor tissue could be economized to the maximum extent and the risk of repeated percutaneous transthoracic lung biopsy could also be lowered to the maximum extent.

BRAF is another important drugable driver mutation in NSCLC. Compared with EGFR, the detection of BRAF mutation both in tumor tissue and plasma still has a long way to go. To the best of our knowledge, BRAF detection of cfDNA in NSCLC hasn’t been reported yet. We performed BRAF mutation detection in 107 pairs of lung adenocarcinoma plasma cfDNA and matched FFPE DNA samples. CastPCR was applied to detect BRAF mutations in tumor tissues and 6.5% (7/107) patients were identified as mutation positive, consistent to the result concluded by NGS [32, 41]. Interestingly, p.V600E accounted for about half BRAF mutations in NSCLC in earlier studies [42–46], and recent studies employing NGS technology exhibited that non-p.V600E mutations is the majority (70.0–80.0%) of BRAF mutations in NSCLC [32, 41, 47]. In our study, the frequency of non-p.V600E was 85.7% (6/7), similar to that demonstrated by studies using NGS.

In BRAF mutation detection of cfDNA with CastPCR, the sensitivity, specificity and concordance was 28.6% (2/7), 93.0% (93/100) and 88.8% (95/107), respectively (Table 3). The low sensitivity may mainly related to the following reasons: Firstly, tumor heterogeneity. In the 12 patients whose mutation conditions were inconsistent, 58.3% (7/12) had distant metastasis. Thus their cfDNA released in plasma could probably carry different gene information compared with primary tumors. Secondly, detection of BRAF non-p.V600E mutations in exon 15 of cfDNA needs more investigation. In our study, sensitivity for p.V600E (locates on exon15) and p.G469A (locates on exon11) both reached 100.0%, while none of the five p.D594Gs (locate on exon15) in FFPE samples were detected in their matched plasma. Similarly, Couraud et al. [48] applied NGS to detect mutations of exon 11 and 15 in about 60 tumors and corresponding plasma, and better result was produced for mutations of exon 11 mutations than that of exon 15.

All samples used in this study were obtained from Nanjing Drum-Tower Hospital form 2007 to 2016. 125 lung adenocarcinoma patients were enrolled, and data of 107 paired samples was analyzed in the end (Figure 1). Patients’ clinicopathological features are provided in Table 7. 83.2% (89/107) blood samples was collected when patients were diagnosed, together with their paired tumor tissue. 16.8% (18/107) blood samples was collected right after the recurrence, while tumor samples came from the historical surgical specimens (duration of diagnosis to recurrence ranges from 1 to 46 months, medium 18 months), and 61.1% (11/18) of them had experienced chemotherapy after surgery. 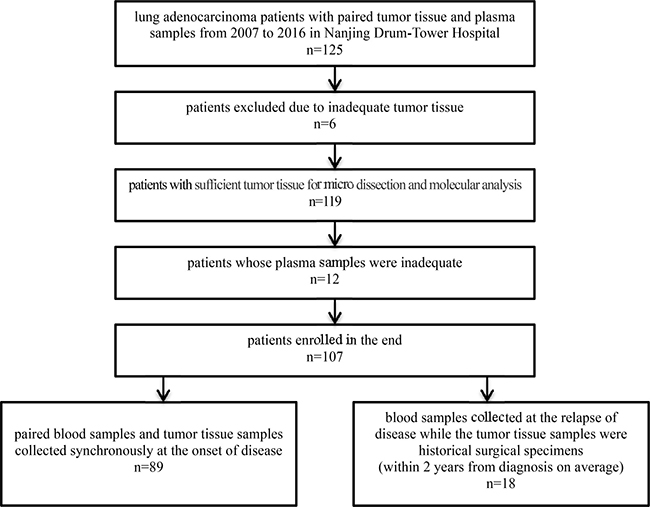 FFPE samples were cut into slices and each slice was 4μm thick. For every FFPE sample, a random slice was performed with the HE staining, then two pathologists identified and marked the tumor tissue through the observation of microscope. 1–2 mL peripheral blood was collected into an EDTA-containing tube, centrifuged at 3000 rpm/min for 15 min at room temperature, then the plasma portion was pipetted carefully, aliquoted to 0.5 mL Eppendorf tubes and stored at −80°C. All patients enrolled in the study provided written informed consent for the use of their resected/biopsied tumor tissue and peripheral blood. The study was approved by the Ethics Committee of Nanjing Drum-Tower Hospital.

CastPCR technology combines allele specific TaqMan® qPCR with allele-specific blocker (ASB) oligonucleotides that effectively suppress nonspecific amplification from the off-target allele. In our preliminary experiment, we assessed the limit of detection (LOD, minimum percentage of mutant alleles in a wild type background required for reliable mutation detection) of some of the assays with corresponding mutated cell lines. It turned out to be that the sensitivity was consistent to that provided by the manufacturer: 0.1% for EGFR c.2235_2249del, p.L858R and BRAF p.V600E, 1.0% for EGFR p.T790M. Due to unavailable corresponding cell lines, LOD of EGFR c.2236_2250del, BRAF p.G469A and p.D594G was not assessed. Concentration of extracted DNA was determined by a NanoDrop spectrophotometer (NanoDrop Technologies, Inc., Thermo Fisher Scientific, Wilmington, DE, USA), and adjusted to a concentration of 10 ng/μL. PCR mutation detection assays were then conducted with 2μL of each DNA sample. Every DNA sample was analyzed by CastPCR using the EGFR_6223_mu, EGFR_6225_mu, EGFR_6224_mu, EGFR_6240_mu, BRAF_460_mu, BRAF_467_mu and BRAF_460_mu assays for the detection of c.2235_2249del, c.2236_2250del, p.L858R, p.T790M p.G469A, p.D594G and p.V600E, respectively (Life Technologies, USA). The threshold cycle was set as 0.2 according to the handbook of Taqman Mutation Detection Assay by CastPCR. CastPCR was run in a final volume of 10μL in a 96 well plate including 5μL TaqMan® Genotyping Master Mix (2X), 2μL Prepared gDNA sample, 2μL Nuclease-free water and 1μL TaqMan® Mutation Detection Assay(10X) (mutant allele or gene reference assay). Positive control was set for each sample detecting EGFR c.2235_2249del, p.T790M, p.L858R and BRAF p.V600E. Negative and blank control was set for every assay. Three replicates were set for each assay. PCR were performed on Stratagene MX3000P real-time PCR system (Stratagene, USA). PCR conditions: 95°C for 10 minutes, followed by 5 cycles of 92°C for 15 seconds and 58°C for 1 minute and then 40 cycles of 92°C for 15 seconds and 60°C for 1 minute. According to the handbook of Taqman Mutation Detection Assay by CastPCR, reference Ct value was required between 17 and 27, and samples with a ΔCt of less than 9.96 (9.61 for EGFR p.T790M) were considered positive for mutation, where ΔCt = Ct mut - Ct ref. Otherwise the sample was defined as mutation negative. Detection results of tumor tissue was set the gold standard.

For the first time, we evaluated the possibility of CastPCR detecting EGFR and BRAF mutations in cfDNA of plasma from 107 lung adenocarcinoma patients. For patients whose tumor tissue is not enough or unavailable, EGFR mutation detection with CastPCR in cfDNA could be first choice. For those with EGFR mutations in cfDNA, the result may be taken as reference for further clinical medication. While for those detected without EGFR mutations in cfDNA, further detection in tumor tissue is recommended. Additionally, CastPCR technology was firstly employed to detect BRAF mutations in plasma specimens of lung adenocarcinoma and their matched FFPE samples. We found that for BRAF mutation detection, CastPCR is a specific method while its sensitivity, especially for BRAF non-p.V600E mutations on exon 15, needs further exploration.

We would like to thank all the stuff of the comprehensive cancer center of Drum Tower Hospital.