Lung cancer is the leading cause of cancer death worldwide, and non-small cell lung cancer (NSCLC) accounts for 85% of all lung cancer cases [1]. Approximately 70% of patients with NSCLC have locally advanced disease or distant metastases at diagnosis [2]. Radiotherapy is an important treatment modality for patients with locally advanced disease, particularly those with medical conditions that make them ineligible for surgery. However, radiation-induced lung toxicity, including radiation pneumonitis (RP) and subsequent lung fibrosis, limits the therapeutic ratio and can also complicate quality of life for survivors. Dosimetric variables such as mean lung dose (MLD) and V20 (the volume of lung exposed to radiation doses of 20 Gy or more) have been identified as being associated with RP [3, 4]. However, some patients will still develop RP even when these variables are under the thresholds established for them, implicating the patients’ genetic makeup in their response to radiotherapy.

At the cellular and tissue levels, RP is characterized by injury to type I and type II alveolar cells, endothelium, and fibroblasts, followed by infiltration of inflammatory cells, proliferation of type II alveolar cells and fibroblasts, progression through the epithelial-to-mesenchymal transition (EMT), remodeling of extracellular matrix, and deposition of collagen [5, 6]. The TGFβ superfamily includes multifunctional cytokines that have different isoforms and highly specific functions, e.g. wound healing, extracellular matrix remodeling, and EMT [7]. Patients who develop RP also show increases in levels of the cytokine TGFβ1 during radiotherapy [8]. We previously found that single nucleotide polymorphisms (SNPs) in TGFβ1 could predict the risk of RP among patients receiving radiotherapy as definitive treatment for NSCLC [9]. A subgroup of the TGFβ superfamily, bone morphogenetic proteins (BMPs), is thought to influence inflammatory processes through their chemotactic effects on fibroblasts, myocytes, and inflammatory cells. In addition to the definite role of TGFβ1 in inducing EMT, BMP2 and BMP 4 are the best studied for EMT among the 20 different human BMPs. Interestingly, BMP2 and BMP4 have opposing functions: BMP2 exerts pro-inflammatory effects in endothelial activation [10], whereas BMP4 has anti-inflammatory effects in airway injury [11]. Previous study found that BMP2 was decreased and BMP4 was increased in idiopathic lung fibrosis[12]. Moreover, the ratio between BMPs and TGFβ1 correlates strongly with the EMT: increased TGFβ1 expression, decreased BMP2 expression, and increased BMP4 expression are all associated with induction of the EMT [12].

To the best of our knowledge, no studies have investigated potential associations between SNPs in BMP2 and BMP4 and the incidence of RP, and no studies have incorporated BMP SNPs into existing models based on MLD for predicting the risk of RP (grade ≥ 2 or 3) in patients after definitive radiotherapy for NSCLC. To address these gaps, we selected 8 potentially functional and tagging SNPs in BMP2 (rs170986, rs1979855, rs1980499, rs235768, and rs3178250) and in BMP4 (rs17563, rs4898820, and rs762642). Our hypothesis was that these SNPs in BMP2 and BMP4 are associated with incidence of RP in such patients and that incorporating these SNPs into an existing predictive model based on MLD could more accurately predict the risk of RP after definitive radiotherapy for NSCLC. 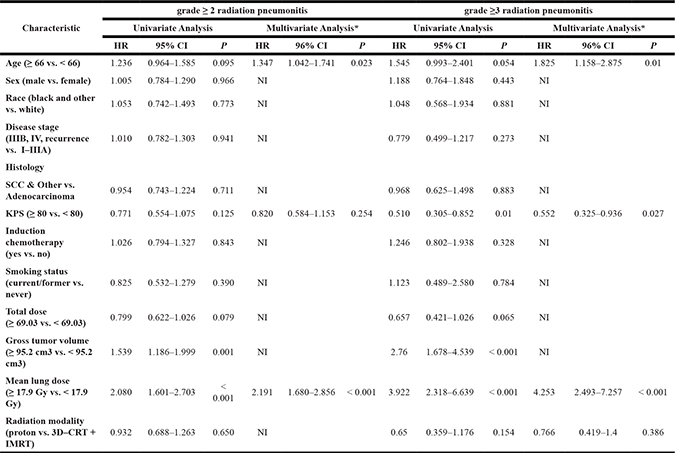 *Characteristics with a P value of <0.05 in the univariate analysis were entered into the multivariate model in a stepwise fashion and were removed if at any point the P value was > 0.20.

Associations between SNPs in BMPs and RP 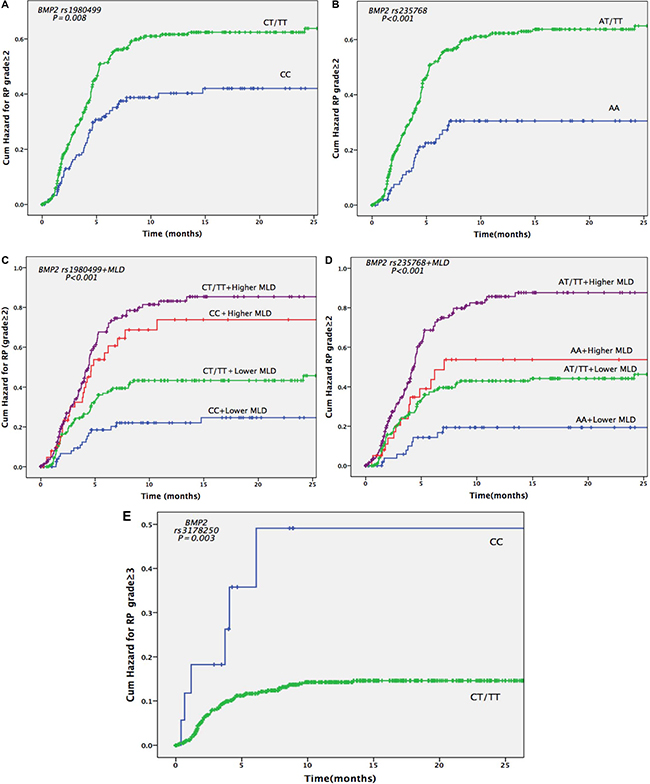 Incorporating SNPs into an clinical model 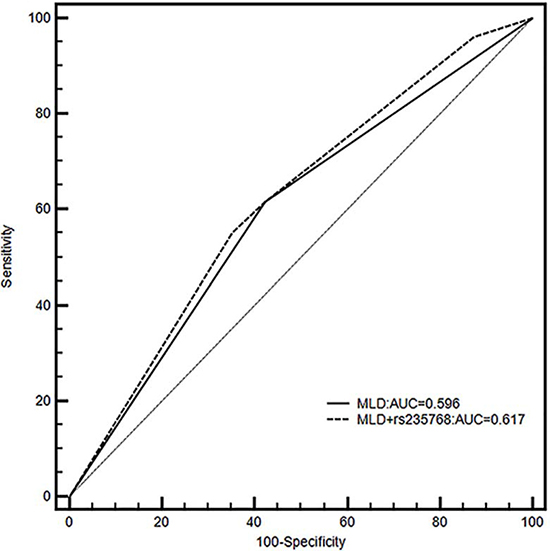 Figure 2: Receiver operating characteristics shown for models including only MLD (black line) or both MLD and rs235768 (dashed line) for grade ≥ 2 radiation pneumonitis (RP) with corresponding areas under curves (AUCs).

To the best of our knowledge, this is the first study to investigate potential associations between SNPs in BMPs and the risk of RP. We found that BMP2 SNPs rs235768 and rs1980499 were associated with risk of grade ≥ 2 RP; and rs3178250 was associated with the risk of grade ≥ 3 RP in patients with NSCLC after definitive radiotherapy. However, no association was found between BMP4 SNPs and RP. Furthermore, we validated that higher MLD was a risk factor for RP and incorporating the SNPs (rs235768 and rs1980499) into an existing MLD-based model could more effectively predict the risk of RP.

Our findings also make sense from a biological standpoint. Like the general inflammation process, RP is a severe acute inflammatory response to radiation, followed by tissue repair and pulmonary fibrosis [14]. BMP2 has complicated roles in this process, having been found to increase both during airway inflammation [15] and after exposure to pro-inflammatory stimuli such as TNFα. Early in the inflammatory process, increased expression of BMP2 could have pro-inflammatory effects by inducing endothelial dysfunction, oxidative stress, and endothelial activation [10]. In the consequent tissue repair process, BMP2 could have a novel role as a fibrosis-antagonizing cytokine through inhibiting TGFβ1 signaling [16, 17]. Therefore aberrant expression of BMP2 could aggravate inflammation, induce more severe toxicity, or attenuate normal pulmonary tissue repair during radiation-induced lung injury. BMP2 rs235768 is a non-synonymous mutation located in the coding area and may affect the protein product. Indeed, one study revealed that BMP2 rs235768 could contribute to higher expression of BMP2 in vitro [18]. These mechanisms could explain our finding that the BMP2 rs235768 AT/TT genotypes could increase the risk of RP. BMP2 rs1980499 is located within the transcriptional factor binding sites of BMP2. It may bind with either positive or inhibitory transcriptional factors and result in aberrant expression of BMP2.

One case-control study showing BMP4 rs17563 increased the expression of BMP4 mRNA and associated with the risk of cutaneous melanoma [19]. In this study we didn’t find association between BMP4 rs17563 and RP in NSCLC patients and couldn’t be able to validate the BMP4 expression.

The ability to safely escalate radiation doses has long been considered important for patients with cancer given its established dose-response relationship [20, 21]; however, results from the Radiation Therapy Oncology Group trial 0617 showed that a dose of 74 Gy (given in 2-Gy fractions with concurrent chemotherapy) not only was no better than 60 Gy with concurrent chemotherapy for patients with stage III NSCLC but also may have been harmful [22]. This result may have reflected limitations on the assessment of radiation-related toxicity and its contribution to treatment-related death. Therefore, it is crucial to identify patients who will benefit from higher radiation dose as well as those patients who are at high risk of developing radiation-related toxicity. Our inclusion of SNPs related to RP with dosimetric parameters related to RP represents a helpful tool for identifying those patients who are at increased risk of RP and thus may be less suitable for high-dose radiation. From the perspective of clinical practice, testing SNPs is inexpensive and relatively less invasive than analysis of tumor samples, as SNPs can be tested directly in peripheral blood samples, which expands the numbers of patients who can undergo this testing.

A strength of our study was the relatively large number of patients analyzed (663); indeed, this may be the largest study reported to date on associations between SNPs and RP in patients with NSCLC [23–25]. We further tested the power of adding SNPs to the established clinical RP predictive model to investigate the predictive role of SNPs in the aspect of clinical practice.

However, this study also had some limitations. First, because it is a single institution retrospective study, these findings await for validation by other institutions and other patient populations. Second, we did not investigate the mechanisms underlying our positive results. Third, only potentially functional and tagging SNPs were studied, rather than all of the SNPs in the entire gene.

In conclusion, we found that SNPs in BMP2 (rs235768, rs1980499, and rs3178250) can predict grade ≥ 2 or 3 RP after definitive radiotherapy for NSCLC, and including these SNPs in an existing model predicting RP risk based on age, performance status, and MLD could improve the predictive power.

This retrospective analysis was approved by the institutional review board of The University of Texas MD Anderson Cancer Center, and we complied with all applicable Health Insurance Portability and Accountability Act regulations. We searched an institutional database to identify patients who had received definitive radiotherapy for NSCLC at MD Anderson from 1999 through 2014 who had (1) histologically confirmed NSCLC; (2) received a total radiation dose of ≥ 60 Gy [or ≥ 60 Gy (RBE) for proton therapy]; (3) available computed tomography (CT) or positron emission tomography (PET) scans obtained within 1 year after completing radiotherapy, to be used for detecting and scoring RP; and (4) available archived blood samples for genotyping. Patients who had received stereotactic ablative radiotherapy were excluded. A total of 663 patients met these criteria and were the subjects of this analysis.

RP was assessed at each follow-up visit after the completion of radiotherapy and graded according to the National Cancer Institute’s Common Terminology Criteria for Adverse Events version 3.0. Follow-up visits took place within the first 1–3 months after radiotherapy and then every 3 months thereafter for 2 years; those visits included interval history and physical examinations and imaging studies.

Potentially functional and tagging SNPs were selected by using https://snpinfo.niehs.nih.gov/snpinfo/snpfunc.html. Predicted SNP functions are shown in Supplementary Table 1. The inclusion criteria were: (1) a minor allele frequency of > 5% among whites; (2) located in a transcription factor binding site, a microRNA binding site, or a non-synonymous mutation in the coding area; and (3) an R2 value for linkage disequilibrium between each SNP of < 0.8. Linkage disequilibrium was calculated with Haploview (https://www.broadinstitute.org/scientific-community/science/programs/medical-and-population-genetics/haploview/haploview) (Figure 3; numbers in the grid are R2 × 100). 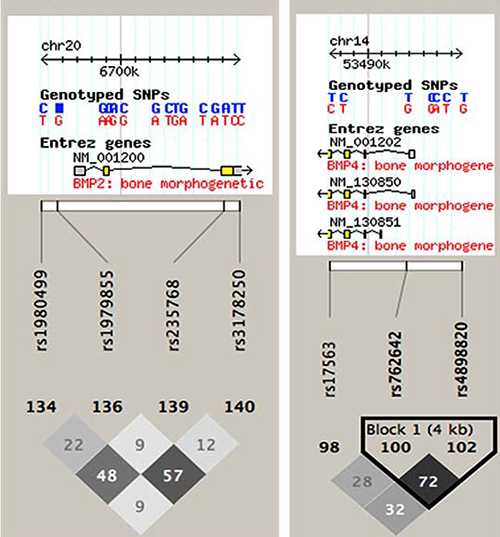 Genomic DNA was extracted from the buffy coat fraction of blood samples using a blood DNA mini kit. The genomic DNA was genotyping by Taqman real-time polymerase chain reaction. The extract of genomic DNA and genotyping methods were described in our previous study [13]. For all genotypes, the assay success rate was > 95%, and concordance of repeated sample testing was 100%.

Chi-square tests were used to test for potential differences in distributions. Potential associations between RP risk and genotypes were assessed with a Cox proportional hazard model, with consideration of time to event. Characteristics with P values < 0.05 in the univariate Cox analysis were entered into the multivariate analysis; characteristics with a P value of > 0.20 in the multivariate analysis were then removed. Kaplan-Meier analysis was used to assess the effect of different genotypes on the cumulative probability of RP. All of these analyses were done with SPSS 22. Harrell’s C was calculated to determine if adding SNPs that were found to be significant in the multivariate analyses could improve the ability of a model comprising age, performance status, and MLD to predict the risk of RP. All tests were 2-sided and differences were considered significant at P < 0.05.

The authors do not see any conflicts of interest.