Patients and methods: A total of 133 elderly (≥ 65 years) patients who were diagnosed with breast cancer between June 1, 2007, and January 31, 2016, and received trastuzumab treatment were retrospectively reviewed. Cardiac events were defined as: (1) LVEF reduction of >10% from baseline echocardiography, (2) reduction of LVEF to <50%, and (3) signs and symptoms of heart failure as defined by the Common Terminology Criteria for Adverse Events (CTCAE) accompanied by a decrease in the LVEF. Univariate and multivariate regression analyses were used to determine the contribution of different clinical variables to trastuzumab-related cardiac events.

Conclusion: Obesity is an independent risk factor for trastuzumab-related cardiac toxicity in elderly patients with breast cancer, receiving trastuzumab. Further studies are needed to establish the independent predictive value of obesity on cardiotoxicity in these patients.

The gene for the human epidermal growth factor receptor2 (HER2) encodes a transmembrane ligand-activated tyrosine kinase receptor protein and its expression is noted in approximately 25–30% of breast cancer patients. Trastuzumab (Herceptin; Genentech, South San Francisco, CA), developed as a humanized monoclonal antibody and directed against the extracellular domain of the HER-2 receptor, has been confirmed to significantly improve overall survival and progression-free survival in patients with HER2-overexpressed breast cancer, including early, locally advanced and metastatic breast cancer [9, 10]. However, several studies have reported that trastuzumab, especially when combined with anthracyclines, is significantly associated with an increased risk of cardiotoxicity [11–13]. The risk-benefit ratio of trastuzumab in the elderly population has not yet been well defined. In fact, the geriatric population is usually under-represented in clinical trastuzumab trials [14–16].

The left ventricular ejection fraction (LVEF) value was determined at baseline, and the median follow-up of LVEF value was 11.0 months (range, 2–71 months). The median LVEF value at baseline was 61% (range, 47.0–69.0). Fifteen patients (11.2%) experienced a cardiac event during the follow-up period. Of them, 8 (8/15, 53.3%) and 6 (6/15, 40%) patients developed grade 1 and grade 2 LVEF dysfunction, respectively. Only one patient (1/15, 6.6%) presented with symptomatic chronic heart failure and received trastuzumab in combination with liposomal doxorubicin plus paclitaxel for metastatic disease. None of the patients experienced cardiac death during the follow-up. The median time to onset of a cardiac event was 10.0 months (range, 2–26 months), with a median time to recovery of 3 months. Figure 1 shows the cumulative risk of cardiac events in this cohort. 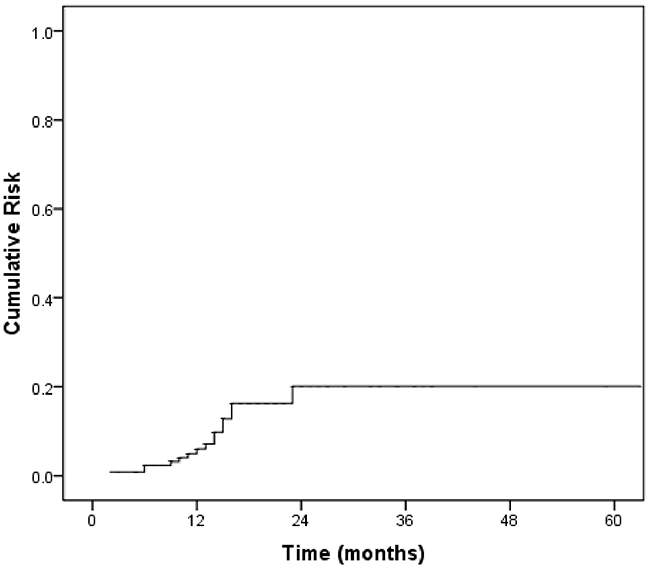 Figure 1: The cumulative risk of cardiac toxicity in the study cohort.

Univariate analysis revealed that the cardiac events were significantly associated with obesity (P = 0.006) and anthracycline exposure (P = 0.039) (Table 2). A history of radiotherapy (P = 0.093) and WIC (P = 0.086) were of borderline significance in the univariate analysis. To identify independent predictive risk factors, the factors found to be significant in univariate analysis (P < 0.10) were included in the multivariate analysis. Multivariate regression analysis revealed that obesity(odd ratio[OR], 4.706; 95% CI, 1.984-10.147; P = 0.002) was significantly associated with cardiac toxicity after adjusting for confounding variables (Table 3). As is shown in Figure 2, the cumulative risk curve of cardiotoxicity by obesity showed that the obese patients had a significant high risk of cardiotoxicity compared with those patients without obesity (P= 0.040). 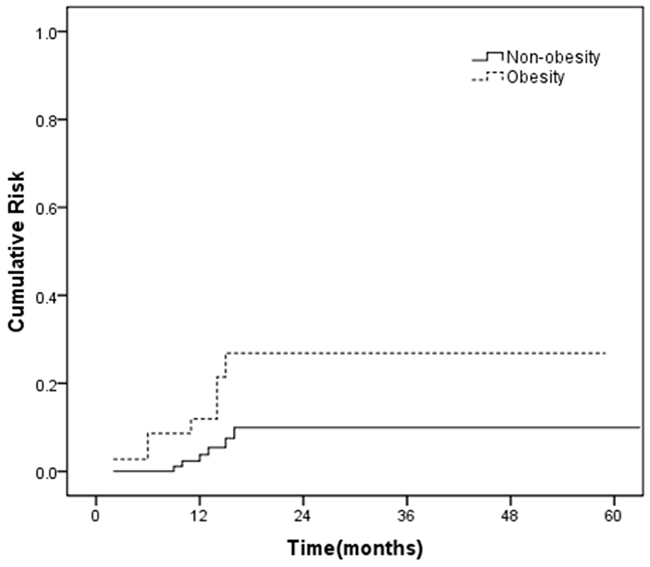 Figure 2: The cumulative risk of cardiac toxicity for patients with vs. without obesity (P = 0.040).

Trastuzumab is the current standard of treatment in HER-2–positive breast cancer patients [17]. However, reports on the cardiac toxicity of trastuzumab-based treatments in elderly patients with breast cancer are limited. Furthermore, although approximately 40% of patients with newly diagnosed breast cancer are older than 65 years [3], the geriatric population is usually under-represented in clinical trials due to their severe comorbid conditions, poor life expectancy, and treatment intension. Therefore, this study evaluated the trastuzumab-related cardiac toxicity in such patients.

Trastuzumab has been shown to significantly improve the overall survival and response rate of breast cancer patients with HER-2 over-expression, regardless of TNM stages [9, 10]. A meta analysis which included eight randomised controlled trials involving 11,991 patients, assessed the efficacy of trastuzumab-containing regimens in patients with early and locally advanced breast cancer. The result showed that the trastuzumab-containing regimens could significantly improve the prognosis in these patients [10]. The similar results were achieved in the meta analysis which aimed to evaluate the survival benefit of trastuzumab in patients with metastatic breast cancer [9]. Slamon et al. prospectively evaluated the efficacy and safety of addition of trastuzumab to chemotherapy for patients with HER2-overexpressing metastatic breast cancer; their results showed that in comparison with chemotherapy alone, the addition of trastuzumab to chemotherapy significantly improved the prognosis (median survival, 20.3 months vs. 25.1 months; P = 0.046) and the objective response rates (32% vs. 50 %, P < 0.001) [11]. However, unexpected adverse events were observed during the pivotal trials of trastuzumab. Numerous studies have provided evidence of trastuzumab-related cardiotoxicity [12–14, 18–20]. The mechanism that trastuzumab, as an inhibitory ErbB2 antibody, could increase the risk of development of cardiotoxicity is not completely clear so far. One of mechanistic theories of trastuzumab-related cardiotoxicity was the ‘dual-hit’ mechanism [21]. On one hand, trastuzumab could directly inhibit HER2’s ability to dimerize and signal cell survival through MAPK/ERK 1/2, phosphoinositide 3 kinase (PI3K)/AKT and FAK-dependent pathways. Thus, the cardiomyocytes could not activate the cell survival pathways to cope with the excess reactive oxygen species (ROS), which could stimulate cardiomyocyte apoptosis to promote the development of cardiac dysfunction [21, 22]. On the other hand, trastuzumab could upregulate angiotensin II (ANG II), a potent inhibitor of neuregulin (NRG). The ANG II not only could downregulate and prevent NRG-1 from binding to HER2/4 to initiate cell survival pathways, but also could promote ROS production by the activation of NADPH oxidase [21, 23]. Furthermore, the addition of chemotherapy, especially anthracycline, could aggravate trastuzumab-related cardiotoxicity. The synergy between trastuzumab and anthracycline could potentiate the increase of oxidative stress which could contribute to cardiac dysfunction, by up-regulating the formation of ROS and reducing antioxidants [21]. A large review including data from 1219 patients with breast cancer revealed the increased risk of cardiac toxicity in patients receiving trastuzumab concomitantly combined with an anthracycline derivative and cyclophosphamide [12]. Slamon et al. enrolled 3222 patients with HER2-positive early breast cancer and reported that the combination of trastuzumab and chemotherapy led to a high incidence of cardiac events. The incidence of subclinical decrease in LVEF was 18.6% in patients administered doxorubicin, paclitaxel, cyclophosphamide, and trastuzumab; 9.4% in patients administered docetaxel, carboplatin, and trastuzumab; and 11.2% in patients administered doxorubicin, cyclophosphamide, and paclitaxel [24].

To the best of our knowledge, this study was the first to address the value of obesity in trastuzumab-related cardiac toxicity in an elderly cohort of breast cancer. The association between obesity (BMI ≥ 30 kg/m2) and high risk of heart failure has been well established: A large, epidemiologic study which analyzed a community-based sample of 5,881 individuals revealed that an increased BMI was significantly associated with an increased risk of heart failure [30]. In addition, previous studies demonstrated that obesity was an important prognostic factor that affected both overall survival and disease-free survival in patients with breast cancer [31]. In our study, obesity had an important role in trastuzumab-related cardiac events. The mechanisms by which obesity could negatively influence cardiotoxicity are affected by numerous confounding factors. First, obesity may increase the expression of pro-inflammatory adipokines and downregulate the anti-inflammatory adipokines, which could result in an adipokine imbalance and maintain a chronic inflammatory state to promote the development of cardiovascular diseases [32]. Second, patients with obesity are more sensitive to the cardiotoxic effects of anthracyclines; an animal model of rats with a high-lipid diet showed similar results [33]. Finally, obesity is significantly associated with activation of neurohormones, increased oxidative stress, increased hemodynamic load, and remodeling of the left ventricle [34]. Further studies should be performed to elucidate the role of obesity in trastuzumab-related cardiac toxicity. Other cardiac event-related factors, including WIC, history of cardiac diseases, anthracycline exposure, and previous history of radiotherapy were not significantly associated with trastuzumab-related cardiac events in this study.

Despite our important findings, this study has several limitations that need to be addressed. First, the study was retrospective in nature and included only one institution. Second, the follow-up duration was short and the sample size was small. Thus, a potential lack of power to detect small differences as a result of population size and the retrospective nature might have influenced the accuracy of cardiotoxicity rates. On the other hand, the decrease in LVEF alone, as a parameter of cardiac toxicity, is considered relatively inadequate for surveillance of cardiac toxicity in patients with breast cancer. At last, the main limitation of 2D echocardiography included its relatively moderate reproducibility, which was inevitably derived from the different equipment, intra- and inter-observer variability. But it should be noted that the 2D echocardiography has been recommended as one of diagnostic tools for the detection of cardiotoxicity by the European Society of Cardiology (ESC) committee, due to the wide availability and the ability to assess haemodynamics and other cardiac structures [29].

In conclusion, obesity was an independent risk factor for cardiac toxicity in elderly patients with breast cancer, receiving trastuzumab. A careful assessment of cardiovascular risk factors is important to improve risk stratification for cardiotoxicity in elderly patients with breast cancer. Further studies are needed to establish the independent predictive value of obesity on cardiotoxicity in these patients.

This was a retrospective study of 133 elderly patients diagnosed with breast cancer and treated in a Shandong Provincial Qianfoshan Hospital between June 1, 2007, and January 31, 2016. The inclusion criteria were as follows: (1) histologically confirmed breast cancer, (2) overexpression of HER2 indicated by immunohistochemistry or gene amplification by fluorescence in situ hybridization or chromogenic in situ hybridization, according to the American Society of Clinical Oncology/College of American Pathologists guidelines, (3) age ≥ 65 years, and (4) receipt of at least one dose of trastuzumab as a part of treatment. The clinicopathologic characteristics and treatment-related factors were extracted retrospectively from the medical records for each patient. Written informed consent was obtained from all patients, and approval for the study was obtained from the independent Institute Research Ethics Committee at the local hospital.

Cardiac events were defined as the presence of one of the following [35]: (1) LVEF reduction of >10% from baseline echocardiography, (2) reduction of LVEF to <50%, and (3) signs and symptoms of heart failure as defined by the Common Terminology Criteria for Adverse Events (CTCAE) accompanied by a decrease in the LVEF. Trastuzumab was discontinued in patients who experienced cardiac events. In other cases, the decision of continuing trastuzumab was considered on a case-by-case basis, following close cardiac monitoring. The WIC was applied to provide a descriptive analysis of the cohort’s comorbidity burden. The WIC is a standardized and validated tool that allows systematic ascertainment of comorbidities and their effect on patient’s mortality.

Continuous variables were reported by mean and standard deviation. Univariate and multivariate regression analyses were used to determine the contribution of different clinical variables to the trastuzumab-related cardiac events. The overall cumulative risk of cardiac events was estimated by the Kaplan-Meier method. The last follow-up evaluation was performed in October 2016. All statistical analyses were performed using PASW Statistics 21 (SPSS Inc., Chicago, IL, USA). A two-sided P value < 0.05 was considered statistically significant.

All authors contributed to the research, writing and preparation of this manuscript. None of the authors has a potential conflict of interest or financial relationship to disclose.

This study was supported by Projects of Medical and Health Technology Development Program in Shandong Province (2016WS0483).