The impact of delayed commencement of adjuvant chemotherapy (eight or more weeks) on survival in stage II and III colon cancer: a national population-based cohort study

Background: To examine the impact of chemotherapy delay on survival in patients with stage II or III colon cancer and the factors associated with the delay (≥8 weeks) of adjuvant chemotherapy.

Time cutoffs defining a delay in adjuvant chemotherapy initiation have varied from one month to three months in previous studies [5-19], and a time delay in chemotherapy has been reported to adversely influence [5, 7, 10, 11, 14-17, 19] or not influence the oncologic outcome (Table 1) [6, 8, 9, 12, 13, 18]. It is still controversial whether a delay in chemotherapy negatively influences oncologic outcomes. Thus, it may be more ethical to perform a retrospective study rather than a prospective study to investigate the impact of the delayed commencement of chemotherapy on survival.

Since 2011, the Korean Health Insurance Review and Assessment Service (HIRA), which is a government agency, has mandated the submission of treatment data for new colon cancer patients, including chemotherapy timing, and has recommended the initiation of adjuvant chemotherapy within 8 weeks after surgery. Using these national population-based cohort data, this study aimed to investigate the impact of delayed chemotherapy on overall survival and factors associated with the delayed commencement of adjuvant chemotherapy after colon cancer surgery.

Chemotherapy regimens according to TNM stage

Table 3: Factors associated with the delay of adjuvant chemotherapy according to 2-week time intervals (n=5355)

Overall survival rates according to the delay of adjuvant chemotherapy 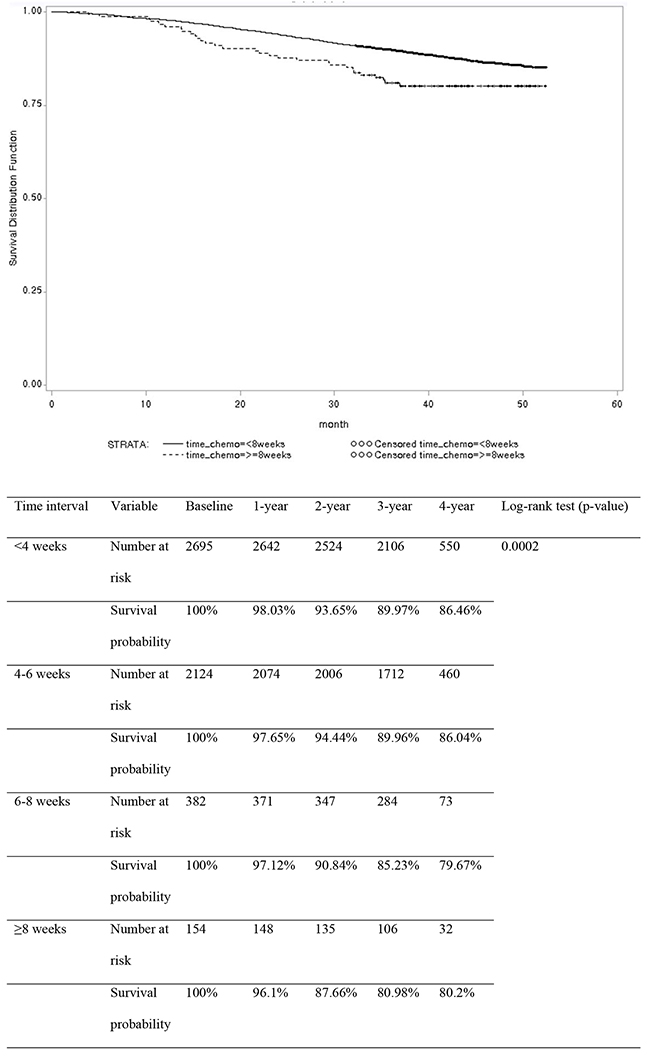 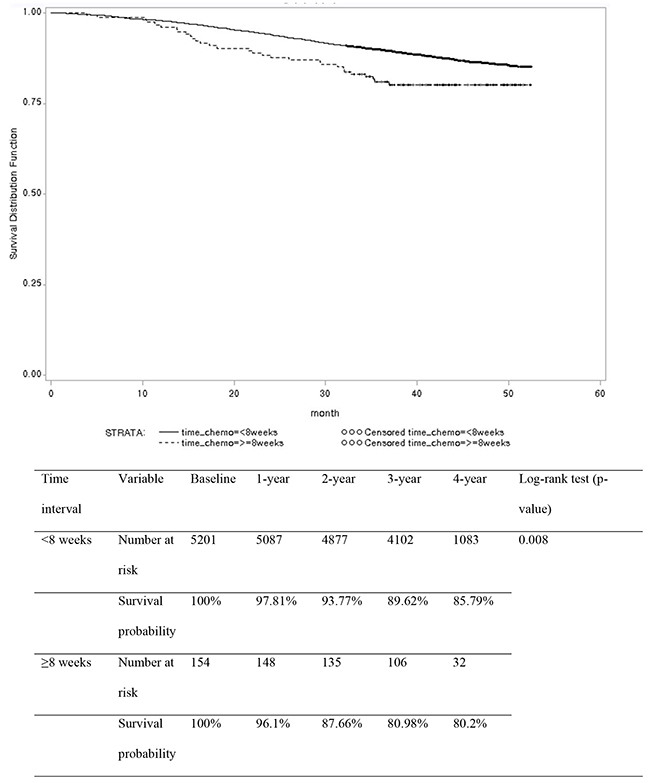 The underlying mechanisms associated with worse outcomes in patients undergoing delayed chemotherapy initiation have been poorly understood, although potential hypotheses have been suggested [20]. In animal models, it has been hypothesized that primary tumor removal may promote metastatic tumor growth by the conversion of resting cells in the G0 phase to the proliferative phase [21], and surgery can stimulate tumor cell growth by enhancing the release of growth factors during the subsequent healing process [22]. In breast cancer patients, it has been suggested that surgery can induce the angiogenic potential of micrometastases and awaken distant dormant micrometastases [23]. Surgical stress can impair immune function by suppressing the function of cytotoxic T cells and natural killer cells and induce the proliferation of micrometastases [24]. These findings indicate that earlier exposure to chemotherapeutic agents following surgery may be beneficial in terms of reducing the risk of recurrence and preventing the development of metastases.

Oncologic outcomes according to chemotherapy delay

Whether the delayed commencement of chemo-therapy affects oncologic outcomes is still controversial. No randomized clinical trial with respect to the timing of chemotherapy has been performed in patients with colon cancer. Upon review of the literature, all studies are retrospective series and study subjects are heterogeneous in terms of cancer stage, chemotherapeutic agents, definition of chemotherapy delay, and survival parameters. With regard to TNM stage, studies investigated stage II [11] or III only [5, 8-10, 12, 14-16, 18] or both stage II and III disease [6, 7, 13, 19], and one study did not address cancer stage [17]. We included patients with stage II or III disease, as current NCCN and Korean clinical practice guidelines recommend adjuvant chemotherapy for stage II and III colon cancer. Regarding chemotherapy regimens, 5-fluorouracil-based [5-9, 11], oxaliplatin-based [12, 18], or both 5-fluorouracil and oxaliplatin-based regimens [14] were used, and some studies did not address specific chemotherapy regimens [10, 13, 15-17, 19]. Our cohort included a significant number of patients undergoing oxaliplatin-based chemotherapy, as current guidelines recommend this regimen for stage II disease with high-risk features or stage III disease. This study consisted of patients treated from 2011 to 2012 to reflect current clinical practice. Time delays of 1-3 months [5], 35 days [6], 44 days [19], 45 days [13], 56 days [8, 9], 8 weeks [14, 15, 17, 18], 60 days [7], 12 weeks [10, 12], 3 months [11], and 2-6 months [16] were used. We initially categorized four subgroups (<4 weeks, 4-6 weeks, 6-8 weeks, and ≥8 weeks) and ultimately used an 8-week cutoff, which is recommended by the Korean government’s health service (HIRA). In this study, only 2.88% of the study population received chemotherapy 8 weeks or more after surgery, which reveals that the government regulation is effective regarding the timing of adjuvant chemotherapy. In terms of survival parameters, overall survival was investigated in most studies [5-11, 13-17, 19], but the time to recurrence [12] or cancer-specific survival [18] were rarely investigated. We analyzed overall survival, as we could not identify the specific cause of death for this study population.

Factors associated with the delay of adjuvant chemotherapy

Diverse factors, such as older age, black race, unmarried status, presence of postoperative complications, prolonged postoperative recovery, emergency surgery, severe comorbid conditions, advanced tumor grade, and institutional time delay between departmental consultations, are associated with delayed adjuvant chemotherapy [5, 25-28]. In this study, using 2-week time intervals (<4 weeks, 4-6 weeks, 6-8 weeks, and ≥8 weeks groups), the delayed initiation of chemotherapy was associated with an increasing trend toward older age, medical aid, stage II disease, emergency surgery, examination of <12 lymph nodes, and use of fluoropyrimidine-based regimens. The relationship between emergency surgery and lymph node count can be explained by the fact that emergency surgery is associated with a low lymph node yield [29]. Fluoropyrimidine-based regimens can be administered to stage II and III patients; however, stage II with high-risk features and stage III patients are primarily recommended to receive oxaliplatin-based regimens. Thus, we could speculate that if the initiation of chemotherapy was delayed over 8 weeks, fluoropyrimidine-based regimens were favored.

Independent risk factors associated with chemotherapy delay (≥8 weeks) were older age, medical aid, and emergency surgery. The risk factors identified in the present study for a chemotherapy delay, such as older age, low income status in terms of medical aid, and emergency surgery, are similar to findings from previous studies. However, the presence of comorbidity based on the Charlson comorbidity index and ASA score was not significant. This study cohort included all Koreans; however, we were unable to obtain certain data, such as marital status and the presence of postoperative complications, due to the nature of national population-based data.

This study is limited by its retrospective design. In addition, data regarding stage II disease with high-risk features, chemotherapy dose reduction, and cancer-related deaths were not available. Another limitation is that the number of patients receiving delayed chemotherapy was small (n=154), which may have introduced a confounding bias. However, this study has several strengths. First, most earlier studies were conducted in Western countries. This study cohort yielded a large quantity of data from a Korean population. Moreover, the data included 21 structured items from a national project conducted by a government health service agency seeking to monitor and evaluate quality of colon cancer care. Second, the study results were derived from chemotherapeutic agents currently being used according to current guidelines for colon cancer treatment.

In summary, this national population-based cohort study shows that delayed commencement of adjuvant chemotherapy, defined as ≥8 weeks, is associated with inferior overall survival in colon cancer patients with stage II or III disease. The delay to initiation of adjuvant chemotherapy is influenced by multidimensional factors, including patient factors (older age), insurance status (medical aid), and treatment-related factors (emergency surgery). Unfortunately, these factors are difficult to modify during colon cancer care. Our findings indicate further studies will be necessary when considering the time to commencement of chemotherapy as a quality indicator for colon cancer care.

This retrospective study was performed using a national population-based cohort and followed the Strengthening the Reporting of Observational Studies in Epidemiology (STROBE) guidelines [30]. This study was approved and informed consent was waived by the ethics review committee of the HIRA (Seoul, South Korea) and the Institutional Review Board of Wonju Severance Christian Hospital (YWMR-14-5-089).

Since 2011, all hospitals in Korea requesting reimbursement for colorectal cancer treatment have been required to submit 21 items of medical data on all newly diagnosed colorectal cancer patients over 18 years of age. This project was named ‘monitoring and evaluation of quality of colon cancer care’. The diseases evaluated were C18 (malignant neoplasm of the colon), C19 (malignant neoplasm of the rectosigmoid junction), and C20 (malignant neoplasm of the rectum) based on the International Statistical Classification of Diseases and Related Health Problems (ICD)-10 version. The 21 items evaluated in detail were the following: 1, presence of a specialized cancer care team; 2, record of preoperative pain score; 3, record of preoperative family history; 4, appropriate preoperative examination (serum carcinoembryonic antigen (CEA), abdomino-pelvic computed tomography scan, upper gastrointestinal endoscopy, colonoscopy, and pelvic magnetic resonance imaging for rectal cancer); 5, operation record for completeness of resection (R0, R1, or R2); 6, postoperative serum CEA within 3 months after surgery; 7, quality of pathological reports; 8, number of lymph nodes examined (more than 12 nodes); 9, quality of medical records related to cancer treatment; 10, ostomy education; 11, whether adjuvant chemotherapy was administered in stage I disease; 12, commencement of adjuvant chemotherapy within 8 weeks after surgery; 13, education on adjuvant chemotherapy plan; 14, use of a flow sheet to record schedule and dose of adjuvant chemotherapy; 15, whether recommended chemotherapy regimens were administered according to colorectal cancer treatment guidelines; 16, use of antiemetics during chemotherapy; 17, postoperative radiation therapy for rectal cancer; 18, preoperative concurrent chemoradiation therapy for rectal cancer; 19, length of hospital stay; 20, treatment cost; and 21, in-hospital mortality. The HIRA collected the aforementioned data to improve the quality of cancer care at the national level.

This study cohort consisted of a total of 5355 patients with stage II or III colon cancer diagnosed between January 1, 2011, and December 31, 2012, who underwent curative resection and completed adjuvant chemotherapy at all hospitals registered in the Korean HIRA. Eligibility criteria included patients with histologically confirmed colon adenocarcinoma and patients over the age of 18 years. The exclusion criteria were patients with stage I or IV diseases, patients undergoing incomplete resection (R2, macroscopic residual disease) or palliative non-resectional procedures, patients not receiving adjuvant chemotherapy, or patients with rectal cancer.

All statistical analyses were performed using SAS version 9.2 (SAS Institute Inc., Cary, NC, USA). Categorical variables are presented as frequencies and percentages and were compared by the chi-square test or Fisher’s exact test as appropriate. Continuous variables are presented as means and standard deviations and were analyzed by the two-sample t-test and analysis of variance (ANOVA). Factors associated with the delay of chemotherapy were identified by logistic regression analysis. Survival analysis was performed by the Kaplan-Meier method with log-rank tests and the Cox proportional hazard model. A p-value <0.05 was considered statistically significant.

We would like to thank Mee Yeon Kang (Health Insurance Review & Assessment Service, Seoul, Korea) for providing technical support associated with the remote internet connection to the database, without which this study could not have been conducted.

Each author certifies that he or she has no commercial associations that might pose a conflicts of interest in connection with the submitted article.

There is no funding source.