Long non-coding RNAs (lncRNAs) are transcribed RNA molecules > 200 nucleotides in length without known protein-coding function. They can regulate the expression of target genes at epigenetic, transcriptional, and post-transcriptional levels [2]. Previous studies have reported that lncRNAs play critical roles in the modulation of heart development and cardiovascular diseases. However, only a limited number of lncRNAs have been found to be associated with myocardial hypertrophy. Wang et al. indicated that lncRNA CHRF was involved in the regulation of cardiac hypertrophy by targeting miR-489 [3]. In addition, Han et al. found that lncRNA Mhrt could protect the heart against pathological hypertrophy [4].

In the previous study, we generated a mouse model of cardiac hypertrophy using transverse aortic constriction (TAC) and conducted a microarray to identify the differentially expressed lncRNAs in myocardial tissue. Our results showed that terminal differentiation-induced ncRNA (TINCR) was remarkably downregulated in hypertrophic mice. The TINCR gene locates on chromosome 19 in humans and encodes a 3.7-kb lncRNA. It has been reported that TINCR-deficient epidermis lacks terminal differentiation ultrastructure, such as keratohyalin granules and intact lamellar bodies [5]. The present study was aimed to determine the potential role of TINCR in the pathogenesis of cardiac hypertrophy.

The expression of TINCR was reduced in the myocardium of hypertrophic mice and increased after transfection with lentivirus pcDNA-TINCR (Figure 1A). Cardiac hypertrophy was evaluated by echocardiography and the ratio of heart weight to body weight was measured. The results showed that heart/body ratio, LVPWd, LVPWs, IVSd and IVSs were significantly increased in the TAC group compared to the control group, while TINCR overexpression was found to attenuate cardiac hypertrophy in the TAC mice (Figure 1B–1F). 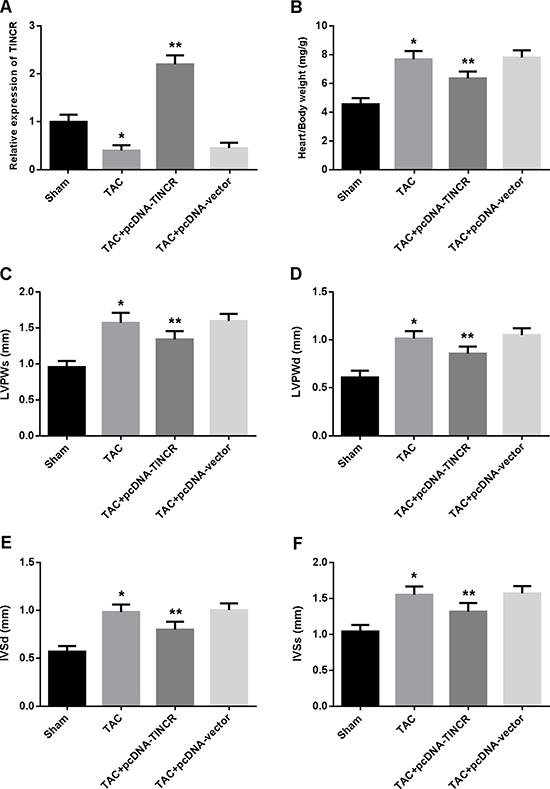 Left ventricular tissue was stained with hematoxylin/eosin and myocyte cross-sectional area (CSA) was calculated. The results indicated that CSA was markedly increased in the TAC mice and reduced following treatment with lentivirus pcDNA-TINCR (Figure 2A, 2B). ANF, BNP and β-MHC, as indicators of myocardial hypertrophy, were found to be upregulated in the TAC group and downregulated in the TAC+pcDNA-TINCR group (Figure 2C, 2D). 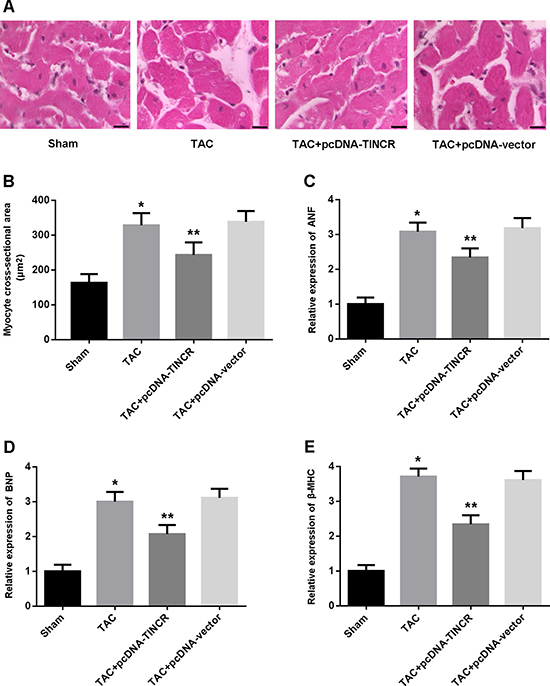 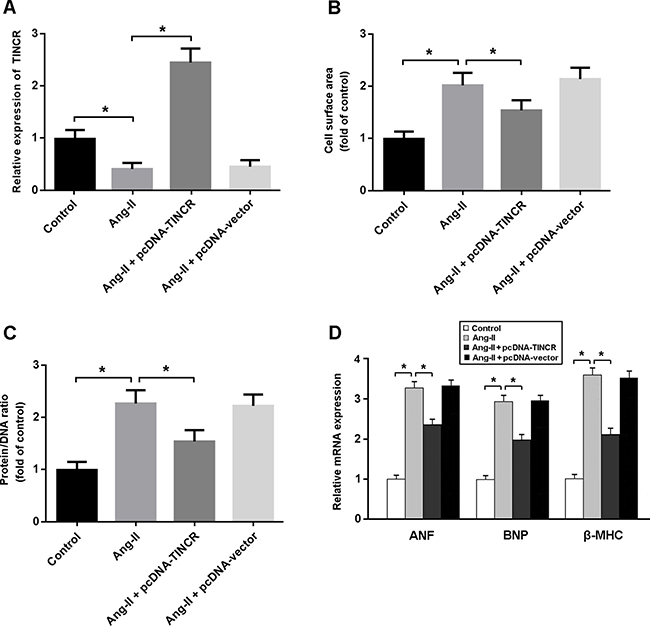 Figure 3: (A) Cardiomyocytes were transfected with adenoviral pcDNA-TINCR or empty vector and then treated with Ang-II at 150 nM for 24 h. The TINCR expression was determined by real-time PCR. (B, C) Cell surface area and protein/DNA ratio were measured to evaluate cardiomyocyte hypertrophy; (D) Relative mRNA expression of ANF, BNP and β-MHC in cardiomyocytes. * P < 0.05. 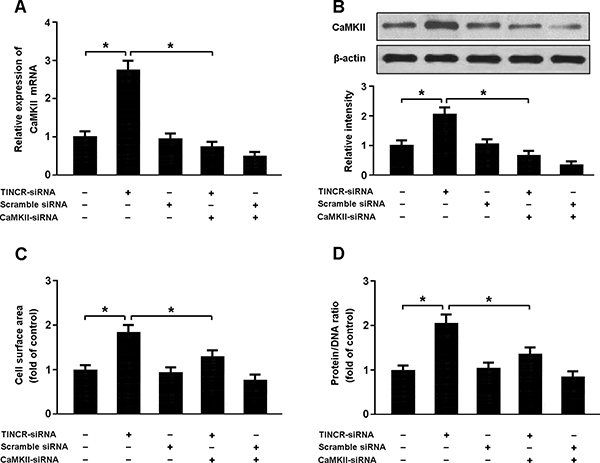 To confirm whether TINCR suppresses the expression of CaMKII through binding to PRC2, we carried out RIP assay and found that TINCR could directly bind to EZH2 in myocardial cells (Figure 5A). The results of ChIP assay indicated that EZH2 could directly bind to CaMKII promoter and induce H3K27me3 modification (Figure 5B). In addition, TINCR knockdown was found to inhibit EZH2 occupancy and H3K27me3 binding in the CaMKII promoter region (Figure 5C, 5D). 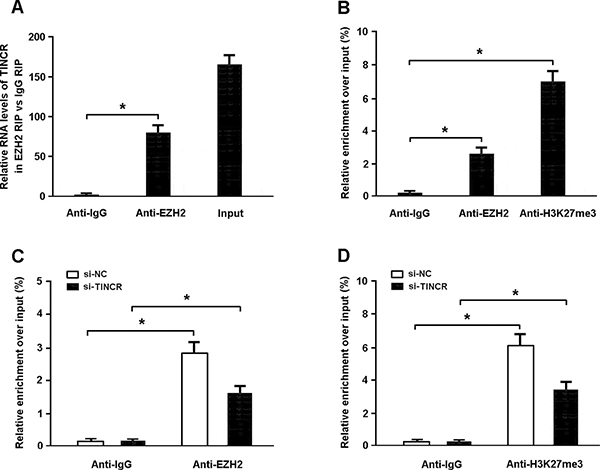 Figure 5: (A) The RIP assay was conducted to confirm whether TINCR could directly bind with EZH2. (B) The ChIP assay was performed to verify whether EZH2 could directly bind to CaMKII promoter and mediate H3K27me3 modification. (C, D) ChIP-qPCR of EZH2 occupancy and H3K27me3 binding in the promoter of CaMKII in cardiomyocytes transfected with TINCR siRNA or scrambled siRNA. *P < 0.05. 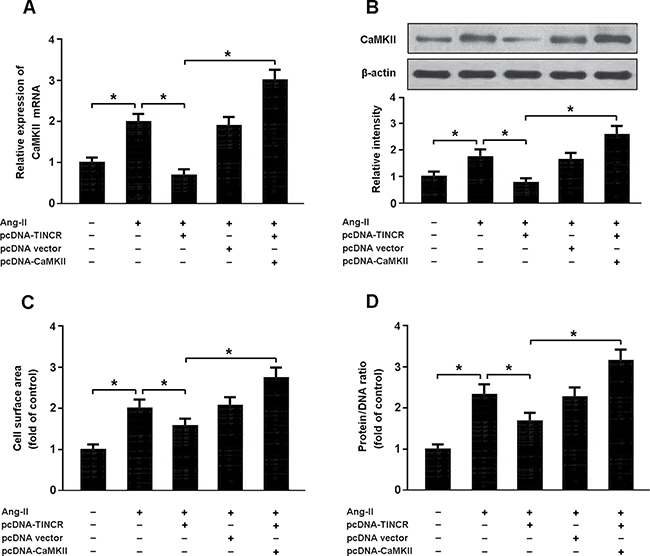 Figure 6: (A, B) Cardiomyocytes were transfected with pcDNA-TINCR and/or pcDNA-CaMKII prior to treatment with Ang-II and the expression of CaMKII was analyzed using real-time PCR and Western blot. (C, D) Cell surface area and protein/DNA ratio were measured to evaluate cardiomyocyte hypertrophy. *P < 0.05.

In recent years, a variety of lncRNAs have been identified to be involved in the regulation of cardiovascular diseases [6–8], but it remains unclear how lncRNAs function in the development of cardiac hypertrophy. In this study, we generated a mouse model of cardiac hypertrophy using TAC method and found that lncRNA TINCR was downregulated in the myocardial tissue. We then carried out in vivo and in vitro experiments to investigate the molecular mechanisms by which TINCR is involved in the regulation of myocardial hypertrophy. Our results indicated that TINCR could inhibit cardiac hypertrophy by epigenetically silencing of CaMKII.

There is growing evidence that PRC2 participates in various biological processes, such as differentiation, proliferation and apoptosis [13]. EZH2 has been reported to be a key catalytic subunit of PRC2 and function as a histone methyltransferase inducing histone H3 lysine 27 trimethylation (H3K27me3) [14]. As an important epigenetic regulator, EZH2 is widely expressed in a number of human cancers and regulates the expression of target genes involved in proliferation, differentiation, and neoplastic cell transformation [15]. In the present study, our findings revealed that TINCR could epigenetically inhibit the transcription of CaMKII by binding to PRC2 and recruiting it to the promoter of CaMKII.

CaMKII, a key serine/threonine protein kinase mainly expressed in the heart, is critically involved in the regulation of ion channels, transcription factors and other membrane proteins which are crucial for myocardial structure and electrical activity [16]. It has been well documented that CaMKII can function as an inducer of cardiac hypertrophy. In previous studies, CaMKII transgenic mice showed significant myocardial hypertrophy, and deletion of CaMKII was found to attenuate pathological hypertrophy [17, 18]. Moreover, Toko et al. revealed that CaMKII played an important role in the progression of heart failure by accumulation of p53 and promotion of cellular apoptosis in dilated cardiomyopathy [19]. In the present study, our findings suggested that CaMKII was upregulated in hypertrophic myocardium, and it might be epigenetically regulated by TINCR and involved in the pathogenesis of myocardial hypertrophy.

In conclusion, our study revealed that CaMKII is a new target of suppression by EZH2-mediated H3K27me3 and is epigenetically inhibited by TINCR, which will provide a novel therapeutic strategy for cardiac hypertrophy.

All experiments were approved by the Animal Ethics Committee and were performed in accordance with the Guide for the Care and Use of Laboratory Animals. TAC surgeries were carried out on 8 weeks old male C57BL/6 N mice. After thoracotomy, the transverse thoracic aorta was dissected, and a 6–0 silk suture was tied around the aorta against a 26-gauge needle. The sham groups underwent a sham operation involving thoracotomy and aortic dissection without constriction of the aorta. The mice were then divided into 4 groups: Sham group, TAC group, TAC+pcDNA-TINCR group (TAC mice were intracoronary administered with 80 μL lentivirus pcDNA-TINCR) and TAC+ pcDNA-vector group (TAC mice were treated with 80 μL lentivirus pcDNA vector). After 4 weeks, echocardiography was conducted and the hearts were harvested for analysis.

Neonatal ventricular myocytes were isolated as previously described [20]. Briefly, myocardial tissues were surgically removed and dispersed in a series of incubations. After centrifugation, the cells were suspended in Dulbecco’s modified Eagle medium/F-12. The dissociated cells were pre-plated at 37°C for 1 h to separate cardiomyocytes by adherence of cardiac fibroblasts. The cardiomyocytes were collected and diluted to 1 × 106 cells/mL and plated in 1% gelatin-coated different culture dishes.

Left ventricular tissue was surgically removed, fixed in 10% buffered formalin, embedded in paraffin, and sliced into 5-μm-thick sections. Slides were then stained with hematoxylin-eosin and observed under a light microscope.

The ChIP assay was performed using the EZ-ChIP Kit (Millipore, USA). Briefly, cardiomyocytes were treated with formaldehyde and incubated for 10 minutes to generate DNA-protein cross-links. Cell lysates were sonicated to generate chromatin fragments of 200–300 bp and immunoprecipitated with EZH2 and H3K27me3 -specific antibodies (Millipore, USA). The precipitated chromatin DNA was purified and subjected to quantitative PCR analysis for enrichment of the target sequences.

The samples were homogenized in 0.1% SDS buffer (Roche, USA) and the lysate was centrifuged at 12,000 rpm for 15 min. The supernatant was collected and the protein concentration was determined using a BCA protein assay kit (Bio-Rad, USA). The extracted protein was separated on SDS-PAGE gel and transferred onto PVDF membrane (Millipore, USA). The membrane was blocked with 5% bovine serum albumin for 1 h to reduce non-specific binding. Then, the blot was incubated with the primary antibody for 12 h at 4°C. The antibodies (CaMKII and β-actin) were purchased from Cell Signaling Technology and used at manufacturer-recommended dilutions (1:1000). After washing, the blot was incubated with HRP-conjugated secondary antibody (Santa Cruz, USA) for 1 h at room temperature. Finally, the signal was detected using the enhanced chemiluminescence kit (Amersham Biosciences) and exposed to X-film.

Data are expressed as mean ± SD, and differences between groups were determined using one-way analysis of variance (ANOVA) with SPSS version 18.0. The Scheffé post-hoc test was used for multiple comparisons if the ANOVA was significant. P < 0.05 was considered statistically significant.