For patients with advanced hepatocellular carcinoma (HCC), sorafenib is the only systemic treatment recommended by international guidelines. We recently reported that HCC patients with a low MoRAL (model to predict tumor recurrence after LDLT) score (≤ 314.8) have excellent treatment outcomes after living-donor liver transplantation (LDLT), even though they are beyond the Milan criteria. In the present study, we investigated whether LDLT offers a better treatment outcome than sorafenib for patients with HCC beyond the Milan criteria according to the MoRAL score. A retrospective cohort study of 325 consecutive patients who were treated with either LDLT (n = 122) or sorafenib (n = 203) for HCC beyond the Milan criteria from 2005 to 2014 at a tertiary hospital was performed. The primary and secondary endpoints were overall survival (OS) and time-to-progression. When baseline characteristics were balanced using inverse probability weighting, OS was significantly longer in the LDLT group than in the sorafenib group (5-year OS rate, 71.9% vs. 4.9%; HR=0.1; P < 0.001). The LDLT group exhibited a significantly lower risk of tumor progression (5-year recurrence rate, 34.7% vs. 96%; HR=0.14; P < 0.001) than the sorafenib group. The increase in OS with LDLT was predominantly among patients with a low MoRAL score (5-year OS rate, 81.1% vs. 5.8%; HR=0.06; P < 0.001) compared with those with a high MoRAL score (5-year OS rate, 28.3% vs. 4.3%; HR = 0.42; P = 0.047). Patients with a low MoRAL score and without extrahepatic metastasis or hepatic vein invasion might be good candidates for LDLT instead of sorafenib treatment if there is a willing living related donor.

In Asia, LDLT is more frequently performed than deceased-donor liver transplantation (DDLT) due to a shortage of deceased donors and possibly also for cultural and religious reasons [7]. Therefore, guidelines detailing how to select recipient candidates for LDLT in advanced HCC are essential. We previously established and externally validated a model to predict tumor recurrence after LDLT for HCC beyond the Milan criteria: the model to predict tumor recurrence after LDLT (MoRAL) score. The MoRAL score uses serum alpha-fetoprotein (AFP) and protein induced by vitamin K absence-II (PIVKA-II) levels in the formula: 11 × √PIVKA + 2 × √AFP. The score can predict tumor recurrence after LDLT and identifies those patients with the potential for low recurrence and long-term OS. The 5-year OS and the 5-year cumulative tumor recurrence rates are approximately 80% and 30%, respectively, in patients beyond the Milan criteria with a low MoRAL score (≤ 314.8) who might be good candidates for LDLT [8].

For patients with advanced HCC, sorafenib is the only treatment proven to have a survival benefit over the best supportive care. However, the median survival and the time-to-radiologic progression are only 2.3 to 3 months longer for patients treated with sorafenib than for those given placebo. The median OS was 10.7 months in the sorafenib group in the Phase III Study of Sorafenib in Patients With Advanced Hepatocellular Carcinoma (SHARP trial) [9, 10]. No consistent survival benefit has been reported for other anticancer systemic therapeutic agents for HCC in approximately 100 randomized studies that investigated intraarterial systemic chemotherapy (doxorubicin and platinum), various hormonal therapies (tamoxifen and antiandrogens), and immunotherapy (interferon alfa) [11–14]. Although locoregional therapies (e.g., radiofrequency ablation, percutaneous ethanol injection, and transarterial chemoembolization) or radiotherapy (conformal or stereotactic) are recommended for patients with unresectable HCC [15, 16], only a few of these are proven to have a survival benefit greater than 1 year [17, 18]. The patients’ underlying poor liver function often limits the utility of locoregional therapies due to the risk of liver failure after treatment. Therefore, for patients with unresectable HCC, LDLT is considered an alternative treatment option.

A total of 325 consecutive patients (122 patients in the LDLT group, 203 patients in the sorafenib group) were analyzed. Table 1 shows the baseline characteristics of the two groups. There were significant differences in the baseline age, Child-Pugh score, and American Joint Committee on Cancer (AJCC), 7th edition, T classification between groups.

Data are expressed as n (%) or median with range.

After IPW, the baseline characteristics, including age, AJCC T classification, and Child-Pugh class, became more balanced than before weighting and did not differ significantly between groups (Table 2). 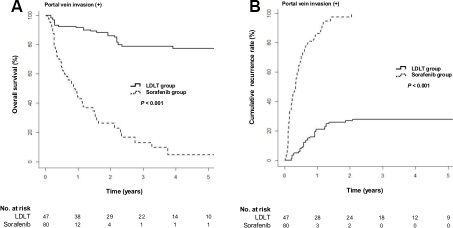 Subgroup analysis according to the MoRAL score for OS and TTP

We performed subgroup analysis by dividing patients into two groups according to the MoRAL score, using a cutoff of 314.8. We then compared the LDLT and sorafenib group for OS and TTP.

In this study, we found that LDLT confers significantly longer OS and TTP than sorafenib for patients with HCC beyond the Milan criteria. The increase in OS for LDLT over sorafenib is more predominant in those patients with a low MoRAL score (≤ 314.8). Our results suggest that patients beyond the Milan criteria with a low MoRAL score and without extrahepatic metastasis might be good candidates for LDLT rather than sorafenib treatment, if there is a willing living related donor.

Sorafenib is a multitargeted tyrosine kinase inhibitor that inhibits vascular endothelial growth factor receptor, platelet-derived growth factor receptor, b-Raf, Fms-related tyrosine kinase, and c-kit [19]. Sorafenib has limited efficacy and a low objective tumor response rate (partial response rate = 2%, stable disease rate = 40%) [9, 20]. However, sorafenib is still the standard treatment when patients have extrahepatic metastasis or unresectable HCC that is either not suitable for or refractory to transarterial chemoembolization. Approximately half of patients with HCC are candidates for systemic chemotherapy, including sorafenib [21, 22]. The prognosis of those patients is poor, with less than 8 months of OS if untreated. Due to the limited efficacy of sorafenib, there is an urgent need to look beyond this medication and establish a more effective therapy for HCC. According to the Hong Kong Liver Cancer staging criteria, surgical- or locoregional treatment is recommend for the subgroup of patients with advanced HCC, such as multinodular or locally-advanced HCC, if they have preserved liver function [23].

Over many years, several groups have suggested criteria to limit liver transplantation to HCC patients with a good prognosis. Currently, patients with HCC beyond the Milan criteria do not have equal access to DDLT as those with HCC within the Milan criteria [25]. In LDLT, the donor frequently wishes to donate, even if the recipient has HCC beyond the Milan criteria. Although LDLT is not a curative treatment, it is palliative and prolongs OS. Therefore, systems to provide the most accurate prognostic evaluation for likely participants become increasingly important. Recently, our group developed and validated a model predicting HCC recurrence after LDLT (the MoRAL score) for those patients beyond the Milan criteria, including those with advanced HCC, based on reproducible predictors including serum AFP and PIVKA-II levels. Patients with a high MoRAL score might have more aggressive tumor biology, leading to a worse outcome. Therefore, we suggested that LDLT should be considered as a treatment option for patients with a low MoRAL score [8].

Our study has several limitations. First, this study was performed in Korea, where 70% to 80% of HCC patients are infected with hepatitis B virus [27]. Therefore, our results might not be generalizable, since most Western countries have HCC patients with different underlying etiologies such as hepatitis C virus infection. Second, there might be an ethical issue in performing liver transplantation in beyond the Milan criteria patients. However, we followed ethical principles, including autonomy and nonmaleficence [28]. Third, this was a retrospective cohort study with inherent limitations including selection bias; we therefore performed IPW to minimize bias. However, some unmeasured difference may not be balanced. Further prospective studies are necessary to confirm superior treatment outcome of LDLT over sorafenib.

We retrospectively analyzed consecutive patients who were treated with either LDLT or sorafenib between June 2005 and December 2014 at Seoul National University Hospital, Seoul, Korea. The diagnosis of HCC was based on the noninvasive criteria of the American Association for the Study of Liver Diseases or on the histologic diagnosis [29]. All donors received psychiatric counseling to determine whether they were suitably motivated to undergo LDLT. In both LDLT and sorafenib groups, patients were with HCC which was unresectable and contraindicated or refractory to transarterial chemoembolization. In patients with HCC beyond the Milan criteria, LDLT was performed only for those who were willing to undergo LDLT. None of the patients in the LDLT group were treated with sorafenib prior to liver transplantation. Patients with extrahepatic metastasis and hepatic vein invasion were excluded. In the sorafenib group, patients received oral sorafenib 400 mg twice daily. Treatment with sorafenib continued until either unacceptable toxicity or disease progression occurred.

The safety of the living donor was of primary concern. All LDLTs were performed after obtaining fully informed written consent and multidisciplinary approval including internal medicine, surgery, psychiatry, and radiology. The study protocol conformed to the ethical guidelines of the World Medical Association Declaration of Helsinki and was approved by the institutional review board of Seoul National University Hospital (IRB No. 1305-561-490).

The baseline patient characteristics were expressed as the median (range). To minimize selection bias and better describe the treatment effect of different modalities, baseline characteristics were balanced using IPW. Propensity scores were calculated using a logistic regression model. We predicted the probability for each patient on the basis of the pretreatment variables. After the inverse probabilities of the propensity score weight was generated, the 2 groups were balanced using IPW.

The Kaplan-Meier method was used to estimate OS and TTP. Multivariate Cox proportional hazards regression analysis was performed to compute the HR. Patients were divided into two groups according to the MoRAL score using a cutoff of 314.8. MoRAL-score subgroup analysis was then performed to compare the LDLT and sorafenib groups.

This study was funded by grant from the National R&D Program for Cancer Control, Ministry for Health and Welfare, Republic of Korea (1420050), Seoul National University Hospital Research Funds (03-2016-0380 and 06-2016-2880), and grant from Liver Research Foundation of Korea as part of Bio Future Strategies Research Project.