Leukemia inhibitory factor (LIF), a member of the interleukin-6 cytokine superfamily, is a multi-functional protein that exerts different functions in different tissues/cells or under different conditions through the activation of different signaling pathways. Transduction of LIF signaling occurs through LIF’s binding to LIF receptor complex composed of LIF receptor (LIF-R) and glycoprotein gp130 [3, 4], which in turn activates selective signaling pathways, including JAK/STAT3, PI3K/AKT, MAPK, and/or ERK1/2 pathways [5-10]. While the overexpression of LIF has been observed in several types of cancers including breast cancer [8, 11-15], the role of LIF in cancer is not well-understood. Limited studies suggested the potential complex role of LIF in cancer depending upon the types of the cancer. LIF could inhibit the differentiation and promote proliferation in some cancers and cancer cell lines, and has been suggested to contribute to the progression of malignancies, including rhabdomyosarcoma, choriocarcinoma and melanoma [8, 16-18]. Meanwhile, LIF has also been reported to induce the differentiation of murine myeloid leukemia cells and inhibit proliferation and growth in some other cancer cell lines [19-21]. Currently, the detailed function of LIF in breast cancer remains unclear.

To investigate the role of LIF in breast cancer, the mRNA levels of LIF, LIFR and gp130 were measured in a panel of human breast cancer cell lines, including MDA-MB-231, HS578T, MDA-MB-468, MCF7, SK-Br-3, T47D and BT474 cells, by employing Taqman real-time PCR assays. Whereas the majority of these cells express LIF receptors (LIFR and gp130) at relatively similar levels (Supplementary Fig. 1a&b), the expression levels of LIF varied dramatically among these cell lines, which are correlated with the metastatic abilities of these cell lines (Fig. 1a). The expression levels of LIF are much higher in MDA-MB-231 and HS578T cells that display higher metastatic abilities [22] compared to less metastatic breast cancer cells, including MCF7, MDA-MB-468, SK-Br-3, T47D and BT474 cells. The difference in LIF expression levels was confirmed at the protein level in MDA-MB-231, MCF7 and T47D cells (Fig 1b), which were chosen for the following experiments to study the role of LIF in breast tumorigenesis. 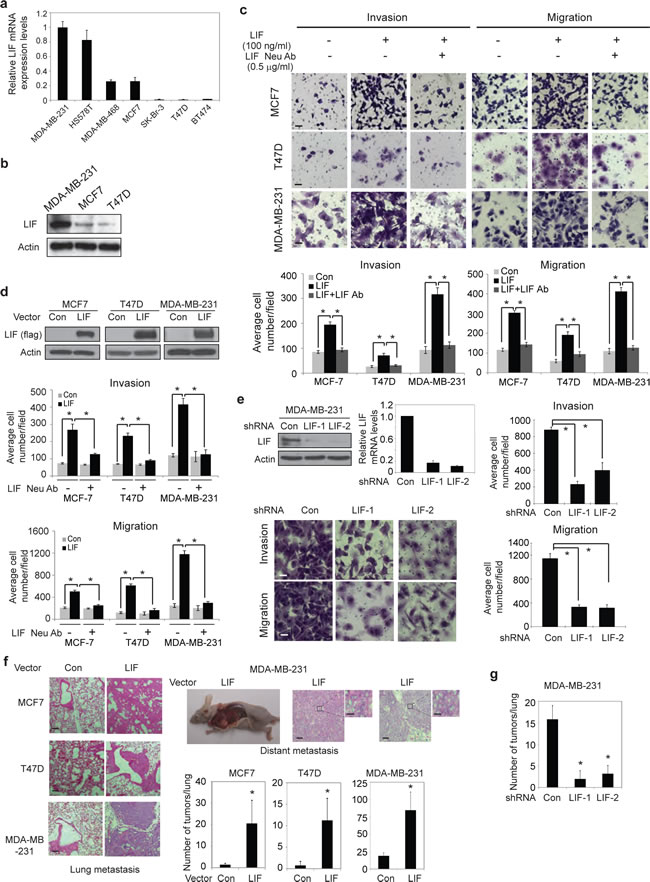 Figure 1: LIF promotes metastasis of breast cancer cells. (a) The mRNA expression levels of LIF in a panel of human breast cancer cells were determined by Taqman real-time PCR and normalized with actin. (b) The protein levels of LIF were determined in MDA-MB-231, MCF7 and T47D cells. (c) Exogenous LIF (100 ng/ml) promoted the abilities of invasion and migration of breast cancer cells, and this effect could be blocked by LIF neutralization antibody (0.5 µg/ml) as determined by trans-well assays in chambers coated with matrigel (for invasion assays) or without matrigel (for migration assays). Upper panels: representative images; lower panels: quantifications of average number of cells/field. (d) Ectopic LIF expression promoted the invasion and migration abilities of breast cancer cells. Upper panels: Ectopic LIF expression in cells detected by Western-blot assays. (e) Knock-down of endogenous LIF reduced the invasion and migration abilities of MDA-MB-231 cells. Top left panel: The efficient knockdown of LIF mRNA and protein in cells. (f) Ectopic LIF expression promoted metastasis of breast cancer cells in vivo. MCF7-LIF, T47D-LIF, MDA-MB-231-LIF and their control cells (Con) were injected into nude mice via tail vein, and the number of metastatic tumors in lung and distant metastatic tumors was determined after 10 weeks. Representative H&E images of lung sections (left panels) and distant metastatic tumors (right top panels) are shown. (g) Knockdown of LIF reduced lung metastasis in vivo. MDA-MB-231-LIFshRNA and MDA-MB-231-ConshRNA cells were injected into nude mice via tail vein, and the number of lung metastatic tumors was determined after 12 weeks. Data are presented as mean ± SD (n=3 for a, c, d & e; n=6 for f & g). Scale bar: c & e: 50 µM; f: 50 µM for low magnitude, and 5 µM for high magnitude *: p<0.001. 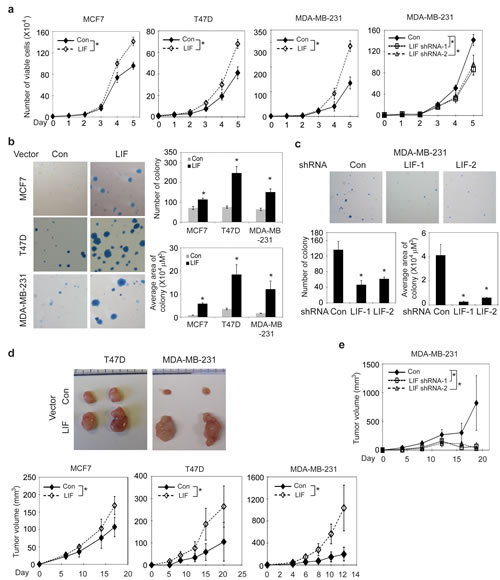 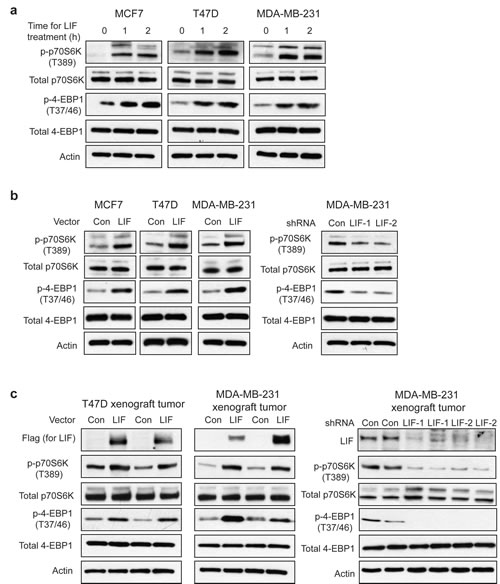 To investigate whether the activation of mTOR pathway by LIF contributes to the role of LIF in breast cancer metastasis, rapamycin, a highly specific mTOR inhibitor, was employed to block the mTOR pathway, and the effect of LIF on invasion and migration was determined. Rapamycin treatment largely blocked the promoting effect of both exogenous LIF and ectopically expressed LIF in cells on invasion and migration in MCF-7, T47D and MDA-MB-231 cells (Fig. 4a & b). Taken together, these results demonstrate that LIF activates the mTOR pathway, which contributes to the promoting effect of LIF on breast cancer metastasis. 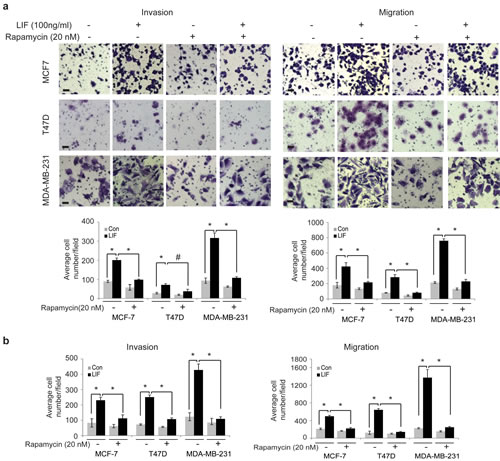 It has been reported that LIF activates the AKT pathway in several different cell types, including human embryonic kidney 293T, liver Hep3B, and oligodendrocytes [7, 27]. We found that LIF activates the AKT pathway in breast cancer cells. As shown in Fig. 5a & b, both exogenous LIF treatment and ectopically expressed LIF in cells increased the phosphorylation of AKT at Ser-473 (p-AKT), which represents the activation of AKT, in MCF7, T47D and MDA-MB-231 cells. Knock-down of LIF decreased p-AKT in MDA-MB-231 cells (Fig. 5c). The activation of the AKT pathway by LIF was also observed in xenograft breast tumors. The levels of p-AKT were much higher in T47D-LIF and MDA-MB-231-LIF xenograft tumors than T47D-Con and MDA-MB-231-Con tumors, respectively (Fig. 5d). The levels of p-AKT were much lower in MDA-MB-231 LIFshRNA xenograft tumors than MDA-MB-231-con tumors (Fig. 5e). 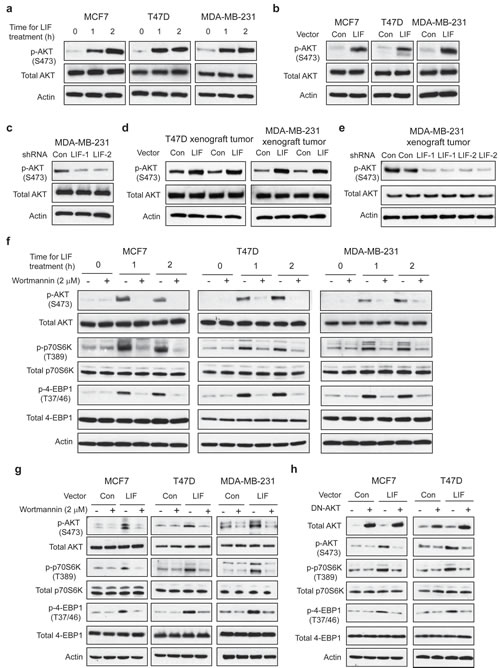 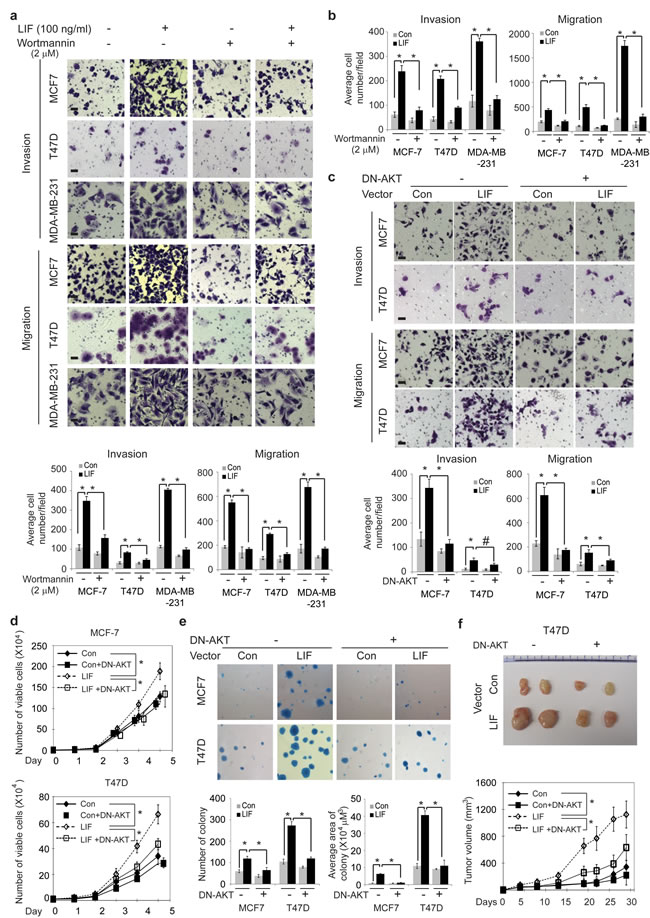 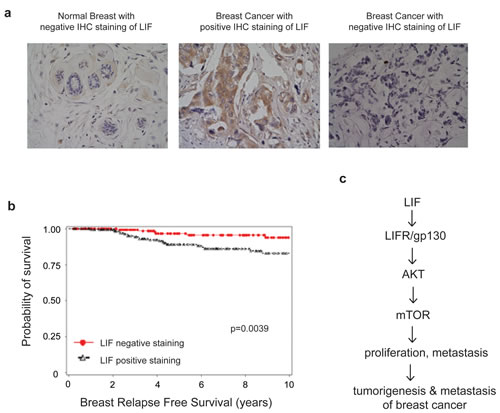 Table 1: The relationship between LIF expression and clinicopathological variables of breast cancer

LIF is a cytokine with a wide array of functions. LIF plays an essential role in embryonic implantation and maintaining pluripotentiality of murine stem cells. Recently, we identified that LIF is a novel p53 target gene, and importantly, LIF mediates p53’s role in embryonic implantation [29-31]. LIF is also involved in bone formation, neuronal survival, and acute immune response to inflammation [32, 33]. The role of LIF in cancer and its underlying mechanisms are not well-understood with limited studies suggesting that LIF may play a role in tumorigenesis.

It is currently unclear whether LIF activates the AKT-mTOR pathway to promote tumorigenesis and metastasis in other types of cancers. During the preparation of this paper, a very recent study reported that exogenous LIF activates the mTOR pathway in nasopharyngeal carcinoma cell lines, which is consistent with our findings [37]. It will be interesting to investigate whether LIF also activates the mTOR pathway through AKT in nasopharyngeal cancer, whether the activation of LIF-AKT-mTOR pathway exists in other types of tumors, and plays an important role in tumorigenesis in future studies.

To date, the association between LIF and prognosis of breast cancer has not been reported. Our results show that higher LIF expression is associated with poorer relapse free survival of breast cancer patients, indicating that LIF could be an important prognostic marker for breast cancer patients. LIF functions as a cytokine protein. Therefore, using antibody against LIF to block LIF function or blocking LIF receptor complex are potential strategies for breast cancer therapy. Furthermore, given the effect of LIF expression on the AKT-mTOR signaling, this pathway may serve as a novel therapeutic target to improve outcomes in breast tumors with LIF overexpression.

The pLPCX-LIF vector expressing LIF with C-terminal flag was constructed by amplifying LIF cDNA using following primers:5’AAGCTTATGAAGGTCTTGGCGGCAGGAG-3’; 5’-TGAATTCGCGAAGGCCTGGGCCAA-3’. LIF fragment was inserted into p3XFlag-CMV-14 vectors, then subcloned into pLPCX vectors along with the flag tag. The pLHCX-DN-AKT vector expressing a dominant negative AKT (DN-AKT; K179M) was constructed by subcloning the DN-AKT fragment from pLNCX-AKT1 K179M (Addgene) into the pLHCX vectors [38].

Total RNA was prepared by using an RNeasy kit (Qiagen). All primers were purchased from Applied Biosystems. Real-time PCR was done in triplicate with TaqMan PCR mixture (Applied Biosystems).

Anchorage-independent growth assays were performed as previously described [41]. In brief, cells were seeded in 6-well culture plates coated with media containing 0.6% agarose, and cultured in media containing 0.3% agarose. Colonies were stained and counted after 2-3 weeks.

Cells (2 × 106 in 0.1mL PBS) were injected into BALB/c female nude mice via tail vein. The mice were sacrificed at indicated time after the inoculation. The numbers of lung and distant metastatic tumors were counted under a dissecting microscope and confirmed by histopathological analysis. Mouse experiments were approved by the University Institutional Animal Care and Use Committee.

Tissue microarray comprising duplicate cores of tumors from 374 breast cancer patients was used for this study. The de-identified clinical information of these patients was obtained from the patient database that has been previously described [42, 43]. In brief, none of the patients in this study received chemotherapy or irradiation therapy prior to the surgery. They were treated with breast conserving surgery with or without axillary lymph node dissection. Following surgery, adjuvant systemic therapy was administered as clinically indicated in accordance with standard clinical practice. The median follow up time is 7.9 years. This study was reviewed and approved by University Human Investigations Committee Institutional Review Board.

IHC staining of LIF was performed as previously described [42-44]. In brief, tissue sections were deparaffinized and antigen retrieval was achieved by Target Retrieval Solution (DAKO). Tissue sections were incubated with anti-LIF antibody (MAB250, R&D, 1:20 dilution) overnight at 4°C, followed with a biotinylated secondary antibody staining. Immunoreactivity was detected by using a Vectastain Elite ABC kit (Vector). Known positive controls were included in each experiment, and negative controls were obtained by omitting the primary antibody. The tumor was considered positive for LIF staining when more than 10% of tumor cells were positive for LIF staining.

A computer program package SAS (Version 9.1, SAS Institute) was employed to manage the patient database and analyze the statistic difference. The relationship between LIF and clinicopathological variables was analyzed by standard Chi-square test. The Kaplan–Meier analysis was used to assess the relationship between LIF and the survival of patients. The differences were assessed by the log-rank test. The statistical differences in xenograft tumor growth among groups were analyzed by ANOVA, followed by Student’s t-test. All other p values were obtained using Student’s t-test. p<0.05 was considered statistically significant.