Tumor PD-L1 expression is used as a surrogate predictive marker of PD-1 treatment [1, 6]. In NSCLC, PD-L1 expression in > 50% of tumor cells is correlated with treatment efficacy. In addition, a recent study suggested that mutation profiles can be used to determine the treatment sensitivity of anti PD-1 antibody [7]. High non-synonymous mutation, neoantigen burden and DNA repair pathway mutations were correlated with good objective responses [7, 8]. However, PD-L1 expression and mutation signature have not been formally accepted as biomarkers for immunotherapy.

Immunotherapy for breast cancer (BC) has also been studied. The phase Ib KEYNOTE-012 trial with the PD-1 antibody, pembrolizumab, for heavily-treated triple-negative BC (TNBC) demonstrated an 18.5% overall response rate and three patients persisted on this treatment regime for at least 11 months [9]. In this trial, PD-L1 positivity was defined as over 1% PD-L1 expression in cancer cells or any staining in the tumor stroma and increasing expression of PD-L1 was associated with anti-PD-1 antibody response. In addition, a phase I trial of an anti-PD-L1 antibody, atezolizumab, for metastatic TNBC was performed and showed a 33% overall response [10]. A further biomarker study for atezolizumab suggested that tumor responses were correlated with high levels of PD-L1 expression in both tumor cells and tumor-infiltrating immune cells. This study also showed that T-helper type 1 gene expression and CTLA4 expression were positively correlated with response and fractalkine (CX3CL1) was negatively done [11].

Here, we sought to identify the gene expression profile associated with immune check points that were potential targets of cancer immunotherapy using advanced BC specimens. Whole transcriptome sequencing analysis could provide useful clues as to which advanced BC populations would benefit from immunotherapy and could help identify predictive markers of immune check point inhibitors.

Thirty-seven metastatic BC samples were analyzed in 91 gene sets associated with the immune pathway (Figure 1A). These 91 gene sets were selected as below: First, we selected 51 immune pathways, 8 pathways including IL-17 and 20 pathways including IRF7 using MSigDB gene sets. In addition, we performed literature review and selected other 16 gene sets [14]. Finally, previous our research showed that KEGG_LEISHMANIA_INFECTION gene set was probably associated to immune signature of BC and this gene set was included to analysis. After removal of duplicated gene sets, 91 gene sets were selected and analyzed (Supplementary Data). 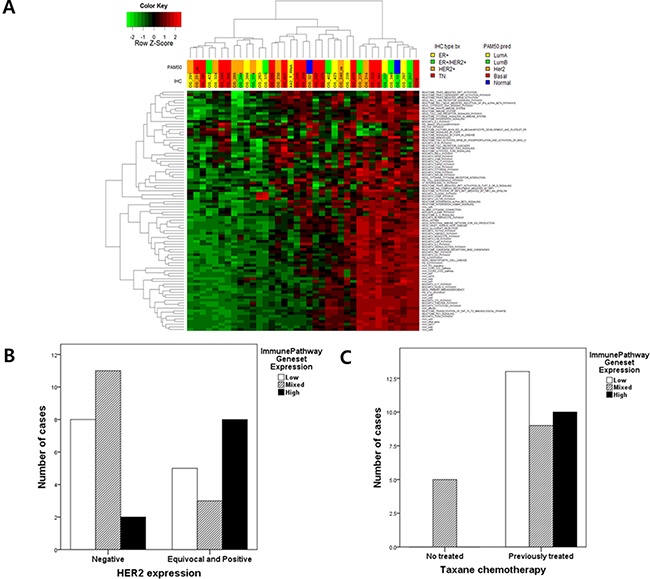 This analysis was divided into three subgroups. One group consisting of 10 BCs showed high expression in nearly all immune pathway gene sets, while thirteen BCs showed no immune pathway activation. The third group exhibited = Of 91 gene sets, TRF3, SMAD2, TLR4, CD40 and the TOLL endogenous pathway were related to survival duration in metastatic BC. However, these gene sets did not interact with one another (Supplementary Figure 2).

Among these subgroups, we found that the HER2 immunohistochemical expression score was marginally associated with immune signature clustering (p = 0.070, Fischer’s exact test) (Figure 1B). Other clinical factors did not affect immune pathway activation with the exception of previous taxane chemotherapy (p = 0.008) (Figure 1C, Table 1 and Supplementary Table 1).

Immune checkpoint gene expression, which is associated with treatment responses of immune check point inhibitors, was also analyzed. We evaluated nine genes previously reported to be targets of immune checkpoint inhibitors: PDCD1 (PD-1), CD274 (PD-L1), CD276 (B7-H3), CTLA-4, IDO1, LAG3, VTCN1, HAVCR2 and TNFRSF4 (OX40) (Figure 2A). Six of 9 genes, CD274, CTLA4, IDO1, LAG3 and HAVCR2, were similarly expressed in each metastatic BC sample. The expression patterns of TNFRSF4 and PDCD1 were also similar to one another. 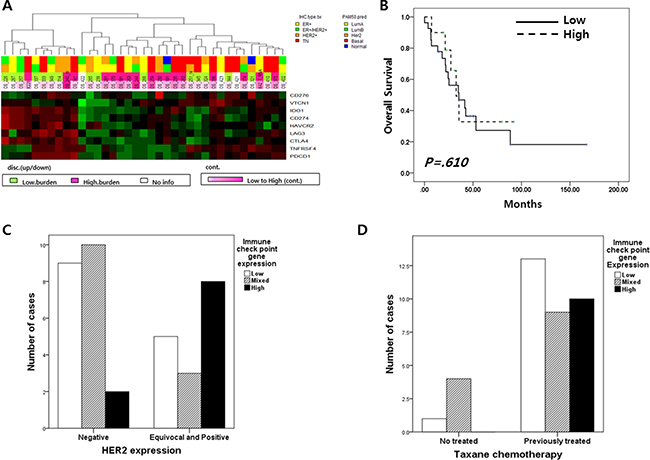 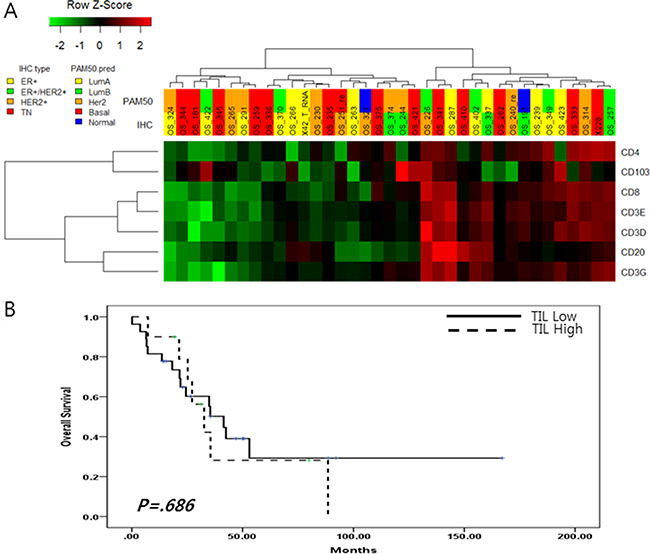 Further analysis suggested that these groups were not associated with BC subtype or any clinical characteristics of metastatic BC, but no baseline characteristics were found to have a impact on lymphocyte infiltration (Table 1C). 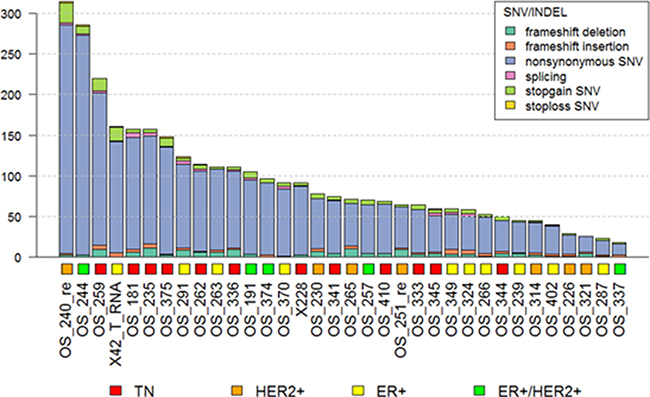 Clinical characteristics of metastatic BC

We enrolled 54 patients with metastatic BC. RNA sequencing was performed on 37 patients and WES was on 34 patients. DNA and RNA extraction failure was the cause of RNA-Seq and WES failure.

The demographic and clinical features of 37 patients are summarized in Supplementary Table 2. The median age of the enrolled patients was 45.1 years, and 35.1% (13 patients) had TNBC. With regard to intrinsic subtype, 14 of 37 patients (37.8%) had basal-like subtype BC. Testing for BRCA1/2 mutation was performed in five patients, and a germline BRCA1 and/or BRCA2 mutation was detected in three patients. Visceral metastasis was found in 15 patients; 8 patients had brain metastasis and the others had liver metastasis. On average, patients with metastatic BC received more than three chemotherapeutic agents for palliative treatment. Thirty-six of 37 patients received anthracycline-containing cytotoxic chemotherapy and 32 were treated with taxane chemotherapy. All patients with ER-positive BC were treated with tamoxifen and/or non-steroidal aromatase inhibitor. Anti-HER2 treatment was administered to all patients with HER2-positive BC. Time to RNA-Seq from diagnosis with metastatic BC varied according to BC subtype (Supplementary Table 2). For ER-HER2-positive BC, mean time to RNA-Seq was 29.3 months (range 5.5–69.7) compared with 4.3 months (range, 0.0–36.7) for ER-HER2-negative BC.

Traditionally, tissue-infiltrating lymphocytes (TILs) have been investigated as immune markers of BC. CD8-positive cytotoxic T-lymphocytes provide useful information regarding patient survival and response to therapy and were more frequently observed in ER-negative BC [16]. In addition, CD45 and CD163, pan-leukocyte markers and M2 macrophage markers were neutral or poor prognostic markers in BC [17, 18]. In this study, the expression of CD4, CD8, PTPRC (CD45) and CD163 interacted with one another; we were able to divide groups into two categories according to whether all four genes were highly expressed. This categorization indicated that there was no difference in survival between the two groups. Moreover, clinical characteristics did not influence this categorization, while HER2 expression has a marginal impact on lymphocyte infiltration (p = 0.077). Accordingly, we suggested that TIL in metastatic BC might not inform.

However, translational analysis with regard to whole exome sequencing and RNA-Seq is the first step to understanding the immune signature of metastatic BC and immunotherapy response patterns in metastatic BC. Thus, this study could determine which BC types would respond to immune check point inhibitor.

In conclusion, we suggest that metastatic BC with HER2 expression and previous taxane treatment might express immune check point genes, immune pathway gene sets and tissue-infiltrating lymphocytes at high levels. Further investigation of immune signature in BC with large-scale translational studies is warranted.

This study was conducted as a prospective explorative analysis of patients with metastatic BC at Samsung Medical Center. Women diagnosed with stage IV BC or recurrent BC after curative treatment on diagnostic examination and a staging work-up (breast magnetic resonance imaging [MRI], chest computed tomography [CT] scan, abdominal CT scan, bone scan, and/or positron emission tomography [PET]-CT scans if indicated) were included.

All patients provided written informed consent, and study approval was obtained from the Institutional Review Board of Samsung Medical Center, Seoul, Korea (IRB No: SMC 2012-08-065).

Two experienced pathologists reviewed all pathology specimens to determine IHC staining for ER, PgR, and HER2. ER and PgR positivity were defined using Allred scores ranging from 3 to 8 based on IHC using antibodies to ER (Immunotech, Marseille, France) and PgR (Novocastra Laboratories Ltd., Newcastle upon Tyne, UK). HER2 status was evaluated using a specific antibody (Dako, Glostrop, Denmark) and/or silver n situ hybridization (SISH). Grades 0 and 1 for HER2, as assessed by IHC, were defined as a negative result, and grade 3 was defined as a positive result. Amplification of HER2 rated as 2+ by IHC was confirmed by SISH. Ki67 IHC analyses were performed by independent semiquantitative and quantitative methods (Dako). Triple negativity was defined as a lack of expression of ER, PgR, and HER2.

Tumors consisting of over 75% malignant cells were dissected under microscopy from 4-mm unstained sections by comparison with an H&E-stained slide, and genomic DNA was extracted using a Qiagen DNA FFPE Tissue kit (Qiagen, Hilden, Germany) according to the manufacturer’s instructions. After extraction, concentration as well as 260/280 and 260/230 nm ratios were measured by spectrophotometry (ND1000, NanoDrop Technologies, ThermoFisher Scientific, MA, USA). Each sample was then quantified using a Qubit fluorometer (Life Technologies, Carlsbad, CA, USA). Genomic DNA with a total yield > 10 ng was used for library preparation.

Fisher’s exact test was used for the analysis of mutations and polymorphic variants, to discover variants that were enriched in patients with favorable outcomes. P-values < 0.05 were considered significantly different. All statistical analyses, plots and heatmaps were conducted using R version 3.0.2 (http://www.R-project.org/).

After trimming poor quality bases from the FASTQ files for whole-transcriptome sequencing, we aligned the reads to human reference genome hg19 with Tophat (version 2.0.6) and performed reference-guided assembly of transcripts with Cufflinks (version 2.1.1). The alignment quality was verified with SAMtools (version 0.1.19). Transcript abundance was estimated using a count-based method with a htseq-count. Gene counts were used as input for Trimmed Mean of M values (TMM) normalization i the R package edgeR [21], and normalized counts were transformed to log2-counts per million (logCPM) by applying voom from the R package limma [22] to account for higher variability at low expression levels. Genes with zero read counts across all samples were removed for more powerful statistical analysis (Supplementary Figure 1).

We evaluated the association between gene expression and overall survival using the R package. Overall survival was defined as the elapsed time between the date of stage IV BC diagnosis and the date of death. For each gene, patients were grouped based on the normalized expression value of the gene, with the top 50% and the bottom 50% representing high and low expression groups, respectively. Survival curves for the two groups were estimated with the Kaplan-Meier method, and the log-rank test was used to compare overall survival curves between the two groups (p < 0.05). Fisher’s exact test was used to identify the pathways with significant enrichment of associated genes in terms of overall survival (p < 0.05).

J-K performed statistical analyses of genetic and clinical sata and drafted and revised the manuscript. EL and KP handled whole exome and transcriptome data analysis. HHJ carried out the sample preparation. J-K and HHJ participated in interpreting the genetic and clinical data. JSA, YHP and Y-I participated in sample preparation and coordination to analyze clinical data. YHP conceived and designed of this study. All authors read and approved the final manuscript. The authors have no conflicts of interest to declare.