A big challenge to clinical diagnosis and therapy of colorectal cancer (CRC) is its extreme heterogeneity, and thus it would be of special importance if we could find common biomarkers besides subtype-specific biomarkers for CRC. Here, with DNA methylation data produced by different laboratories, we firstly revealed that the relative methylation-level orderings (RMOs) of CpG sites within colorectal normal tissues are highly stable but widely disrupted in the CRC tissues. This finding provides the basis for using the RankComp algorithm to identify differentially methylated (DM) CpG sites in every individual CRC sample through comparing the RMOs within the individual sample with the stable RMOs predetermined in normal tissues. For 75 CRC samples, RankComp detected averagely 4,062 DM CpG sites per sample and reached an average precision of 91.34% in terms that the hypermethylation or hypomethylation states of the DM CpG sites detected for each cancer sample were consistent with the observed differences between this cancer sample and its paired adjacent normal sample. Finally, we applied RankComp to identify DM CpG sites for each of the 268 CRC samples from The Cancer Genome Atlas and found 26 and 143 genes whose promoter regions included CpG sites that were hypermethylated and hypomethylated, respectively, in more than 95% of the 268 CRC samples. Individualized pathway analysis identified six pathways that were significantly enriched with DM genes in more than 90% of the CRC tissues. These universal DNA methylation biomarkers could be important diagnostic makers and therapy targets for CRC.

Current methods such as Wilcoxon rank-sum test [8] and T-test [9] can only identify differentially methylated (DM) CpG sites between a set of cancer samples and a set of normal controls. However, such population-level DM CpG sites cannot tell us the frequencies of CpG sites differentially methylated in patients. Because the DNA methylation levels of CpG sites in a healthy population vary greatly across different individuals, it would be unreasonable to detect DNA methylation states of CpG sites in each cancer sample by comparing with the average methylation level in a set of normal samples [10, 11]. Recently, we found that within-sample relative expression orderings (REOs) of genes are highly stable across different samples of a particular type of normal tissue but widely disrupted in the corresponding cancer samples [12, 13]. Based on this biological phenomenon, we have developed an algorithm, named RankComp [12], to identify differentially expressed genes in each cancer tissue by finding those genes whose up- or down-regulations may lead to the disrupted REOs of genes within this cancer sample in comparison with the highly stable REOs of genes predetermined in accumulated normal samples. Because the highly stable REOs of genes predetermined in accumulated normal samples can represent the REOs of genes in every normal tissue, the differentially expressed genes identified by the algorithm for each disease sample are the genes that are differentially expressed in this disease sample compared with its own previous normal state.

In this study, through the analysis of DNA methylation data produced by different laboratories, we showed that the relative methylation-level orderings (RMOs) of CpG sites are also highly stable within normal colorectal samples but widely reversed in CRC tissues. Therefore, we supposed that the RankComp algorithm can be used to detect DM CpG sites in cancer samples at the individual-level. Using 75 paired methylation profiles for colorectal cancer tissues and the paired adjacent normal tissues, we firstly evaluated the performance of RankComp by evaluating the identified DM CpG sites in each cancer tissue according to the observed DNA methylation level differences (hyper- or hypo-methylation) between the cancer tissue and its adjacent normal tissue. Since the performance of RankComp was evaluated based on each paired samples, 75 independent tests were performed. Finally, we detected DM genes and significant deregulated pathways in each of 268 CRC samples from The Cancer Genome Atlas (TCGA) and revealed that there are common DNA methylation biomarkers of CRC, which could be important diagnosis makers and therapy targets for CRC.

Firstly, we identified 152,666,734 and 218,691,193 stable CpG site pairs with stable RMOs in at least 99% of the 142 and 82 samples of normal colorectal tissues assayed by the Illumina Human Methylation 27 Beadchip (27K) and 450 Beadchip (450K) arrays (Table 1), respectively. Notably, 90.62% of the stable CpG site pairs in the shorter list were included in the longer list and 99.94% of the overlapped CpG site pairs had the same RMOs patterns for the normal colorectal tissues (binomial test, p < 2.2 × 10–16). This result suggests that the within-sample RMOs of CpG sites in colorectal normal tissues are highly stable and can be reproducibly detected across different datasets measured by different platforms.

Table 1:The DNA methylation profiles analyzed in this study

Note: *represents the paired cancer-normal samples used to evaluate the performance of Rankcomp. 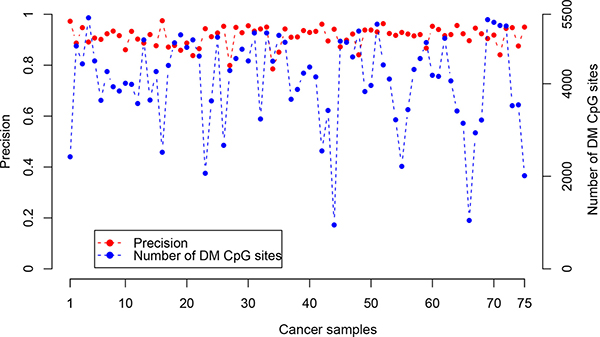 Figure 1: The precision and the number of DM CpG sites detected by RankComp for each of the 75 CRC samples with paired adjacent normal tissues from TCGA.

Then, we used RankComp to identify DM CpG sites for each of the 268 CRC samples from TCGA. A gene was defined as a DM gene in a disease sample if at least one CpG site within its promoter region was identified as a DM CpG site. Genes with inconsistent methylation aberration states (hypermethylation or hypomethylation) within their promoter regions were excluded from the following analyses.

Table 2: Down-deregulation numbers of the 14 frequently hypermethylated genes in 16 CRC samples compared with their paired adjacent normal tissues from TCGA

On the other hand, we found 1288 and 1787 genes that were hypermethylated or hypomethylated in 20–80% of the 268 CRC samples, reflecting the heterogeneity of DNA methylation aberrations across different CRC genomes. Such genes might be subtype-specific genes associated with patients’ prognoses. One important clinical problem for CRC is to develop a signature for predicting prognoses of early-stage (stage I and II) patients undergoing curative surgery since nearly 4% of stage I [25] and 25–30% of stage II [26, 27] patients with curative surgery only will experience relapse. Here, using the overall survival time data of 103 TCGA samples of stage I and II CRC patients with complete surgical resection only, we evaluated whether the patients with and without the deregulation of a gene were significantly different in overall survival (OS) time. Using the univariate Cox proportional-hazards regression model [28], 12 hypermethylated genes and 8 hypomethylated genes were identified to be significantly associated with OS time of stage I and II CRC patients treated with complete surgical resection only (p-value < 0.01) (Supplementary Table 3). For example, ODAM was hypermethyled in 24.27% of the 103 stage I-II CRC patients and these patients had significantly shorter OS time (log-rank test, p = 0.0009) than the other patients without ODAM hypermethylation (Figure 2). This was consistent with a previous report that down-regulation of ODAM is correlated with decreased overall survival in colorectal cancer since ODAM plays a protective role by inhibiting cells proliferation and metastasis in CRC [29]. 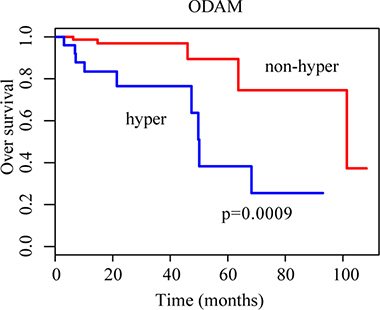 Figure 2: Kaplan-Meier curves for patients grouped based on ODAM methylation. The blue and red lines represent patients with and without hypermethylation, respectively.

Individualized analysis of pathways for CRC

After identifying DM genes for a disease sample, we were able to detect pathways significantly enriched with the DM genes for this cancer sample. 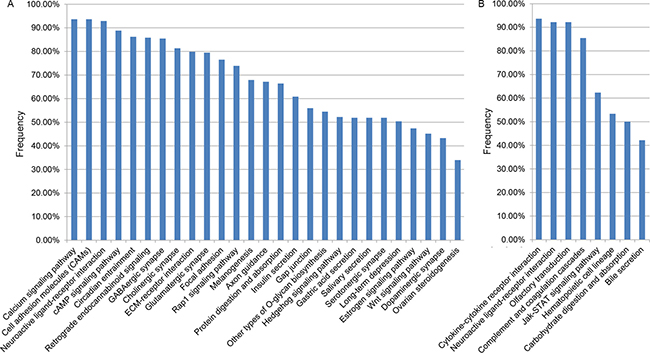 Figure 3: The KEGG pathways separately enriched with hypermethylation (A) and hypomethylation (B) genes in at least 30% of the 268 TCGA CRC samples.

In this work, we have confirmed that the within-sample RMOs of CpG sites keep highly stable in normal colorectal tissues, which are widely disrupted in CRC tissues. The intrinsic biological phenomena provide a basis for identifying DM CpG sites in CRC samples at individual-level through analyzing the widely disrupted RMOs of CpG sites within every individual cancer sample, taking the predetermined stable RMOs landscape in normal samples as the background. In fact, our result revealed that RankComp can accurately identify DM CpG sites for cancer samples at individual-level.

The individualized analysis of DM genes makes it possible to estimate the frequency of an epigenetic aberration in a particular type of cancer such like CRC. The application of the individual-level analysis to 268 CRC samples revealed universal and subtype-specific DM genes and pathways for CRC. Especially, we found 26 and 143 genes that were hypermethylated and hypomethylated, respectively, in more than 95% of the 268 CRC samples. These universally aberrant DNA methylation genes and pathways may be important diagnostic makers and therapy targets for CRC, which deserves our future investigation. On the other hand, genes and pathways with DNA methylation aberrations in a part of the CRC samples could be subtype-specific, which provide hints for dissecting the inter-individual heterogeneity of CRC. Notably, researchers have recently proposed new methods such as CellMethy [38] and CpG_MPs [39] to identify another type of disease methylation biomarkers namely differential concordant methylation of adjacent CpGs, which may provide insight into methylation mechanisms. In line with this direction, we could use a slide window to find adjacent CpGs with concordant methylation aberration status in disease samples after identifying DM CpG sites for individual cancer samples by RankComp, and this may deserve our future study.

In summary, the individual-level analysis of DM CpG sites reveals that there are common DNA methylation biomarkers, besides subtype-specific biomarkers, for CRC, which could be important diagnosis makers and therapy targets for CRC.

The RMO of two CpG sites (A and B) was defined as stable when their RMO (A > B or A < B in methylation level) was identical in at least 99% of the colorectal normal samples collected from multiple data sources, allowing 1% detection error rate.

Where Pe (Pe =0.5) is the probability of the RMO of one CpG site pair shared by the two lists by chance.

Identification of individual-level DM CpG sites by the RankComp algorithm

The flowchart of using RankComp for detecting individual-level DM CpG sites is shown in Figure 4. 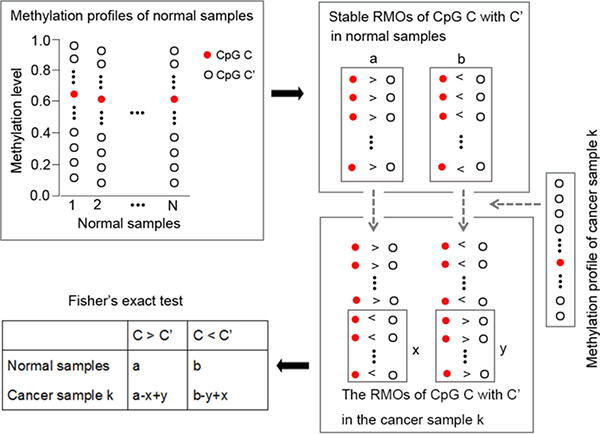 Figure 4: The flowchart of the individual-level DM CpG sites analysis with RankComp algorithm.

The DNA methylation profiles for 75 CRC tissue samples with paired adjacent normal tissues were used to evaluate the performance of RankComp. We firstly identified DM CpG sites in each of the 75 cancer samples by RankComp using DNA methylation data on cancer samples alone. We then evaluated the precision of individual-level DM CpG sites for each of the cancer samples using the observed methylation level differences (hypermethylation or hypomethylation) between this cancer sample and its paired adjacent normal sample as the golden standard. The underlying assumption of this evaluation is that the previously normal state of a cancer tissue could be approximately represented by the adjacent normal tissue of the cancer tissue. For a cancer sample, if the hypermethylation or hypomethylation states of DM CpG sites detected by RankComp are consistent with the golden standard, then they are defined as true positives (TP); otherwise, false positives (FP). The precision of the DM CpG sites detected for each CRC sample is calculated as the positive predictive value: TP/(TP + FP). Since the performance of RankComp was evaluated based on each paired samples, 75 independent tests were performed.

For pathway enrichment analysis, data of 234 pathways covering 5981 unique genes was downloaded from the Kyoto Encyclopedia of Genes and Genomes (KEGG) (Release 58.0) [44]. The hypergeometric distribution model was used to determine the biological pathways that were significantly enriched with hyper- and hypomethylated genes, respectively [45]. The p-values were adjusted using the Benjamini-Hochberg procedure [43].

32. Paschos KA, Canovas D, Bird NC. The role of cell adhesion molecules in the progression of colorectal cancer and the development of liver metastasis. Cell Signal. 2009; 21: 665–674.

43. Benjamini A, Hochberg Y. Conrolling the False Discovery Rate: A practical and Powerful Approach to Multiple Testing. Journal of the Royal Statistical Society. 1995; 57:289–300.