Nuclear factor-κB (NF-κB), a transcription factor of DNA, cytokine, and cell survival, has been widely demonstrated to involve in cellular responses to various stress, such as cytokines, free radicals, heavy metals, and bacterial or viral antigens. Overexpression or inappropriate activation of NF-κB implicated in a number of pathological mechanisms of diseases ranging from inflammation to cancer. In the acute lung injury, NF-κB has been widely served as the therapeutic target to alleviate inflammation. For example, acteoside, tylvalosin, and emodin were demonstrated to inhibit NF-κB signal, which further alleviated inflammatory response in acute lung injury models [3–5]. Small interfering RNA (siRNA) against NF-κB also confirmed the beneficial effects of NF-κB inhibition on inflammatory response, including acute lung injury model [6]. Thus, inhibition of the NF-κB pathway considers as a potential strategy for the therapeutic target of this crucial transcription factor of acute lung injury. Pyrrolidine dithiocarbamate (PDTC) is a thiol compound and has been considered as an effective inhibitor of NF-kB [7–9]. Thus, we used PDTC to inhibit NF-κB pathway to investigate the protective effects of NF-κB inactivation by PDTC on lipopolysaccharide (LPS)-induced acute lung injury in mice. 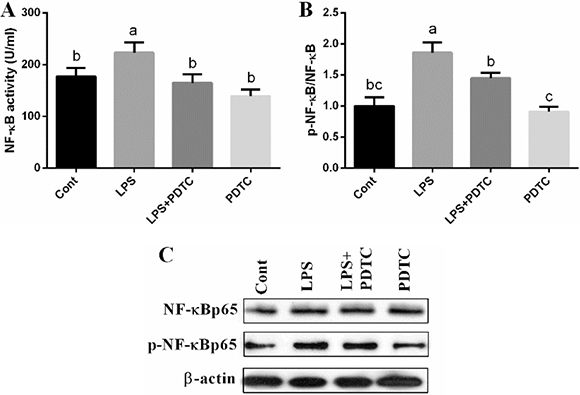 Figure 1: Effects of LPS and PDTC of NF-κB signal in the lung via ELISA kit and western blot. Data are expressed as the mean ± standard error of the mean. Values in the same row with different superscripts are significant (P < 0.05). 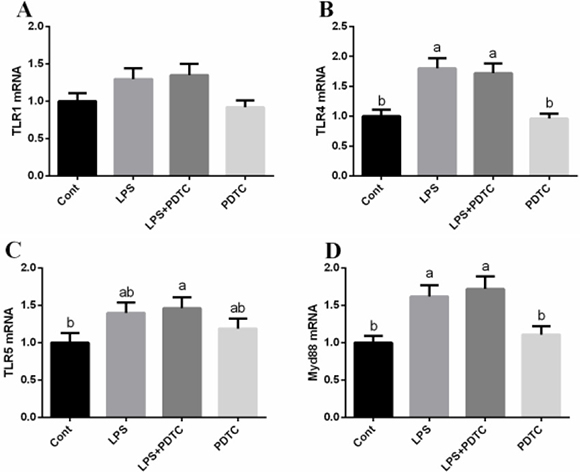 Figure 2: Effects of NF-κB inhibition on TLRs/Myd88 in the lung via RT-PCR. Data are expressed as the mean ± standard error of the mean. Values in the same row with different superscripts are significant (P < 0.05).

BAL was used to test the inflammatory cells, including macrophages, lymphocytes, and PNL (Figure 3). Total cells, macrophages, lymphocytes, and PNL were markedly higher in LPS-changed group compared with that in the control group (p < 0.05). PDTC tended to reduce total cells and macrophages in BAL fluid, but the difference was insignificant (p > 0.05). Lymphocytes was significantly decreased in LPS+PDTC group compared with the LPS group (p < 0.05). We further tested immunoglobulins (IgA, IgG, and IgM) in the BAL fluid and found that LPS markedly reduced IgG and IgM abundances (p < 0.05) (Table 1), while PDTC failed to influence immunoglobulins secretion in the lung (p > 0.05). 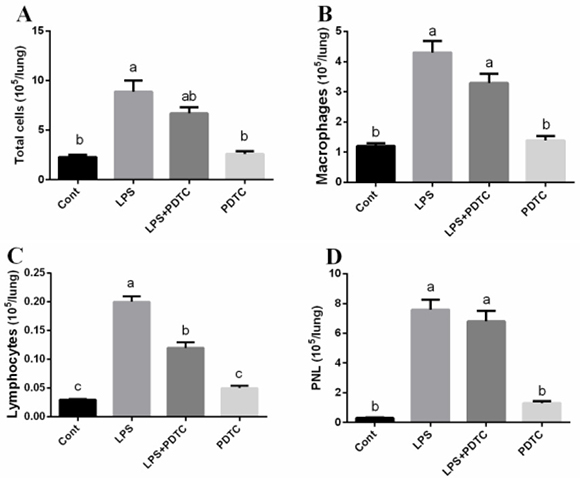 Figure 3: PDTC alleviates LPS-induced inflammatory cells infiltration in the lung. Data are expressed as the mean ± standard error of the mean. Values in the same row with different superscripts are significant (P < 0.05).

Table 1: Effects of LPS and PDTC on lung immunoglobulins (g/L) 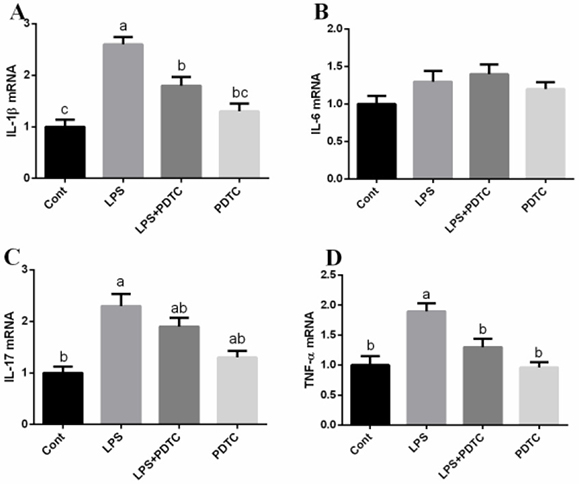 Figure 4: PDTC alleviates LPS-induced inflammatory response in mice. IL-1β, IL-6, IL-17, and TNF-α were determined by RT-PCR. Data are expressed as the mean ± standard error of the mean. Values in the same row with different superscripts are significant (P < 0.05).

Data are expressed as the mean ± standard error of the mean. Values in the same row with different superscripts are significant (P < 0.05).

Expressions of superoxide dismutase 1 (SOD1), SOD2, and catalase in the lung after LPS exposure were further determined via western blot (Figure 5). The results showed that LPS inhibited SOD1 expression and PDTC markedly enhanced SOD1 abundance in the lung (p < 0.05). Although PDTC tended to upregulated SOD2 and catalase expressions, the differences were insignificant (p > 0.05). 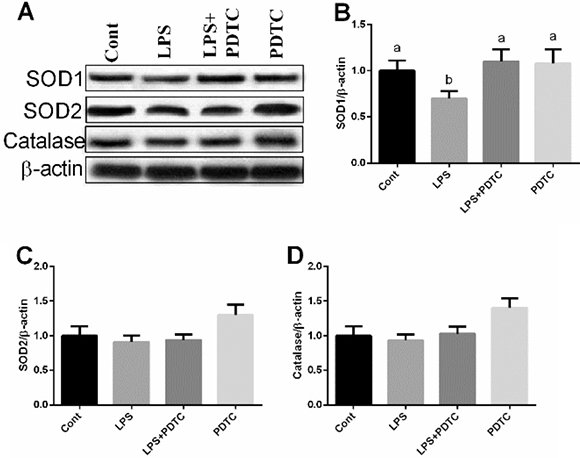 Figure 5: Effects of LPS and PDTC on SOD1, SOD2, and catalase expressions in the lung via western blot. Data are expressed as the mean ± standard error of the mean. Values in the same row with different superscripts are significant (P < 0.05). 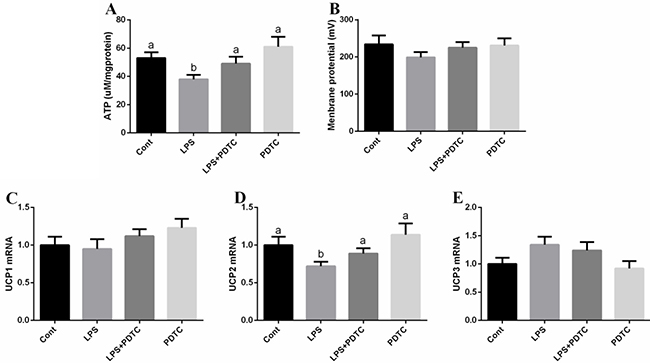 Figure 6: Mitochondrial function in the lung after LPS and PDTC treatment. UCP1-3 were determined by RT-PCR. Data are expressed as the mean ± standard error of the mean. Values in the same row with different superscripts are significant (P < 0.05).

Uncoupling proteins (UCPs) contribute to oxidative phosphorylation from ATP synthesis and mitochondrial proton leak. In this study, we found that LPS inhibited UCP2 expression in the lung (p < 0.05) (Figure 5), which further confirmed the mitochondrial dysfunction after LPS exposure. Meanwhile, PDTC alleviated the inhibitory effect of LPS on UCP2 expression (p < 0.05).

NF-κB involves in various inflammatory diseses and mediates cytokines expression [10, 11]. In this study, we found that LPS significantly increased NF-κB activity and its upstream proteins (TLR4/Myd88), suggesting that TLR4/Myd88/NF-κB involved in LPS-induced inflammation and oxidative stress in mice. PDTC has been widely served as the inhibtor of NF-κB and exhibits antioxidant function in various models [12, 13]. The present study used PDTC to inhibit NF-κB signal in LPS-induced acute lung injury and showed that inhibition of NF-κB alleviated LPS-induced inflammation, oxidative stress, and mitochondrial dysfunction in mice.

Inflammation plays a critical role in the progression of acute lung injury [14]. The current results indicated a marked inflammatory response in LPS-challenged mice evidenced by the increased inflammatory cells (macrophages, lymphocytes, and PNL) and over-expressions of IL-1β, IL-17, and TNF-α and the reduced immunoglobulins (IgG and IgM) in the lung, while inhibition of NF-κB by PDTC treatment alleviated LPS-induced generation of lymphocytes, L-1β, and TNF-α. Similarly, Li et al. reported the effects of NF-κB inhibitor PDTC on a herpetic stromal keratitis mouse model and showed that 10 mg/mL PDTC treatment markedly decreased IL-1β and IL-4 expressions [12]. Although we failed to investigated the morphology in the lung after LPS exposure, histologic analysis from a murine model of titanium particulate-induced inflammation showed that PDTC alleviated lung injury and decreased cellular infiltration and the release of inflammatory cytokines (IL-1β and TNF-α) in the lavage fluid [15].

Oxidative stress has been indicated to contribute to the progression of acute lung injury [16–19]. Under oxidative stress, oxidative balance was disturbed with production of oxidative products [20], such as MDA. In this study, we found that MDA level in the lung was enhanced in LPS-induced acute lung injury in mice, while inhibition of NF-κB markedly alleviated oxidative injury in LPS-challenged mice. NF-κB also serves as a redox-sensitive factor and oxidative stress plays an important role in the activation of NF-κB signal [21, 22]. Meanwhile, provious reports also confirmed an antioxidant function of PDTC [23, 24]. For example, PDTC adminstration inhibited superoxide anion-induced NF-κB activation, inflammation, and oxidative stress in the paw and spinal cord, which further alleviated mechanical hyperalgesia, thermal hyperalgesia and inflammatory response in peripheral foci [23]. Similarly, we also noticed that PDTC enhanced SOD1 expression, suggesting that PDTC improve antioxidant balance in LPS-induced acute lung injury in mice.

This study was approved by the animal welfare committee of The First Affiliated Hospital of Zhengzhou University. 40 8-week-old female Balb/c mice were randomly assigned into 4 groups (n = 10): a control group, a LPS-challenged group, a PDTC group, and a PDTC plus LPS group. LPS was used to induce acute lung injury via intraperitoneal injection of 15 mg/kg LPS (Sigma, St. Louis, MO, USA). PDTC (Sigma-Aldrich Co., USA), dissolved in distilled water, was administered intraperitoneally to mice at dose levels of 50 mg/kg 1 hour before LPS treatment.

After 24 h, mice were sacrificed and the lungs were lavaged twice with 0.8 mL sterile saline each time to obtain bronchoalveolar lavage fluid (BAL). BAL was performed by cannulating the trachea with a 20-gauge needle and infusing the lungs 2 times with 1 ml of physiological buffered saline (PBS) containing 0.1% bovine serum albumin (BSA). BAL fluid was centrifuged (150 × g) for 10 min at 4 °C. The cells obtained were resuspended in 500 μL of PBS containing 0.1% BSA and used to measure the total cell count and macrophages, lymphocytes, and polymorph nuclear leukocytes (PNL).

Lung samples were homogenized (1 g tissue in 9 mL saline) and then centrifuged at 3,000 × g for 10 min under 4ºC. The supernatants were used for determining NF-κB activity via an ELISA kit (Shanghai Yaji Bio. Tech., China).

Mitochondria from mouse lungs were isolated and ATP synthesis was measured with a luciferase/luciferin-based approach. The mitochondrial membrane potential (ΔΨm) was estimated using Rhodamine (Sigma) according to previous report.

One piece of lung were harvested and stored at −80ºC. Total RNA of these tissues was isolated with TRIZOL regent (Invitrogen, USA) and reverse transcribed into the first strand (cDNA) using DNase I, oligo (dT) 20 and Superscript II reverse transcriptase (Invitrogen, USA). The reverse transcription was conducted at 37°C for 15 min, 95°C 5 sec. Primers were designed with Primer 5.0 according to the gene sequence of mouse to produce an amplification product (Table 3). β-actin was chosen as the house-keeping gene to normalize target gene levels. The PCR cycling condition was 36 cycles at 94°C for 40 sec, 60°C for 30 sec and 72°C for 35 sec. The relative expression was expressed as a ratio of the target gene to the control gene using the formula 2-(ΔΔCt), where ΔΔCt=(CtTarget-Ctβ-actin)treatment-(CtTarget-Ctβ-actin)control. Relative expression was normalized and expressed as a ratio to the expression in the control group.

Table 3: Primers used in this study

All data were analyzed by SPSS 17.0 software. Difference was tested by Ducan’s multiple comparison test. Data are expressed as the mean ± SEN. Values in the same row with different superscripts are significant (P < 0.05).