Carotid plaque is a good surrogate endpoint for assessing arterial atherosclerosis, and atherosclerosis is a reliable predictor of cardiovascular diseases. However, the effect of body mass index on carotid plaque is unknown. Therefore, we aimed to explore the association between body mass index and carotid plaque in a low-income Chinese population. Residents aged ≥45 years and free of stroke and cardiovascular diseases were enrolled and divided into four groups based on body mass index. B-mode ultrasonography was performed to measure carotid plaque. The mean age of participants was 59.92 years overall. Significant correlations were observed between the presence of carotid plaque and male sex, older age, systolic blood pressure, fasting plasma glucose, and low-density lipoprotein cholesterol among the different BMI subgroups. Male sex increased the risk of carotid plaque in the overweight and obese groups. Older age and high level of low-density lipoprotein cholesterol were the independent risk factor for carotid plaque in four groups. Increased systolic blood pressure was an independent risk factor in the normal-weight, overweight, and obese groups; however, fasting plasma glucose was only significant in the normal-weight group. Thus, controlling the levels of low-density lipoprotein cholesterol, systolic blood pressure, and fasting plasma glucose is required to reduce carotid plaque risk.

The World Health Organization stated that 17.5 million people died of cardiovascular diseases (CVDs) in 2012, comprising 31% of all deaths globally. An estimated 7.4 million of those were due to coronary heart disease, and 6.7 million were due to stroke [1]. Of the 16 million deaths of individuals < 70 years of age due to non-communicable diseases, 82% occurred in low- and middle-income countries, and 37% were caused by CVDs [1]. CVDs are the leading cause of death both in Western countries and in China, accounting for 40% of deaths in China in 2012 [2]. Among those, 44.6% of deaths in rural areas and 42.5% in urban areas were CVD-related [2]. Stroke is the second most common cause of death; Feigin et al. reported that the age-standardized stroke rate in low- and middle-income countries is 1.24-fold higher than that in high-income countries [3]. Furthermore, the stroke prevalence among patients ≤75 years in low- and middle-income countries is three times higher than that in high-income countries [3]. Thus, individuals with CVD, or who are at high risk for it, require early detection and management to prevent or delay end events.

Several studies have shown that atherosclerosis is a reliable predictor for CVDs and that that presence of carotid plaque is a better surrogate endpoint for assessing arterial atherosclerosis lesions than is carotid intima-media thickness [4-9]. Several studies have also investigated risk factors for carotid plaque, such as age, sex, cigarette smoking, alcohol consumption, body mass index (BMI), education levels, and so on [6, 9-20]. However, there has been no consensus on the effect of BMI on carotid plaque. A study from Iceland showed that BMI protected against carotid plaque. Sturlaugsdottir et al. [9] demonstrated that after adjustment for other confounding factors, the risk of developing carotid plaque decreased by 28% for each 5-unit increase in BMI (odds ratio [OR], 0.72; 95% confidence interval [CI], 0.64-0.82; P < 0.001). In contrast to those results, West et al. [15] reported that BMI appeared to be a risk factor for carotid plaque among 2,448 young Finnish adults. They studied the risk of carotid atherosclerotic plaque in their adulthood following exposure to parental smoking in childhood and found that the average BMI in individuals without carotid plaque was 17.8 kg/m2, while that in individuals with carotid plaque was 19.1 kg/m2. Furthermore, several studies have demonstrated that BMI had no association with carotid plaque [8, 19, 21]. There are even fewer studies in Chinese populations. Because of the genetic differences between Chinese and Caucasian populations, conclusions from Caucasian populations regarding the associations between BMI and carotid plaque cannot be generalized to Chinese populations. Thus, the purpose of the present population-based study was to determine the association between BMI and carotid plaque among a low-income population in rural China.

In the present study, 4,012 participants were interviewed from among 5,380 eligible residents aged ≥45 years during the study period. The response rate was 74.5%. Finally, 3,789 subjects were included in our study, after excluding 223 residents with a previous history of CVD or stroke (Figure 1).

Table 1: The demographical characteristic and risk factors in this population by gender. 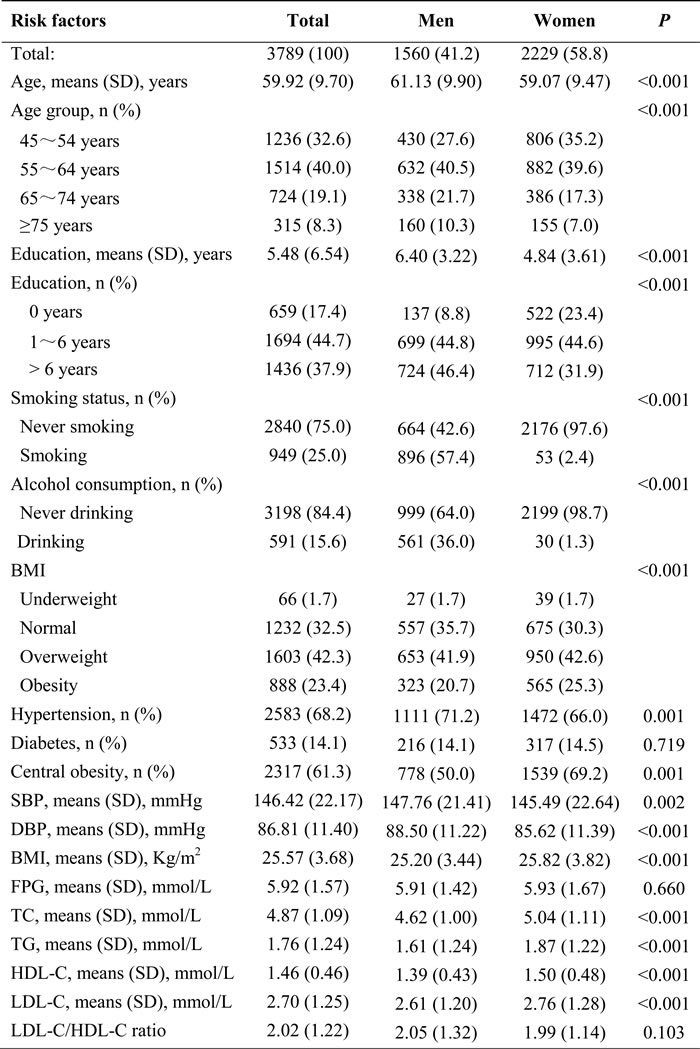 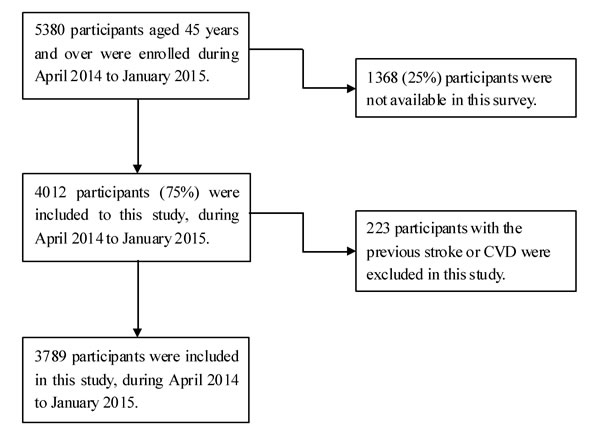 Prevalence of carotid plaque by demographic characteristics and risk factors

Table 2: The prevalence of carotid plaque by Demographical Characteristics and risk factors for all participants in this study. 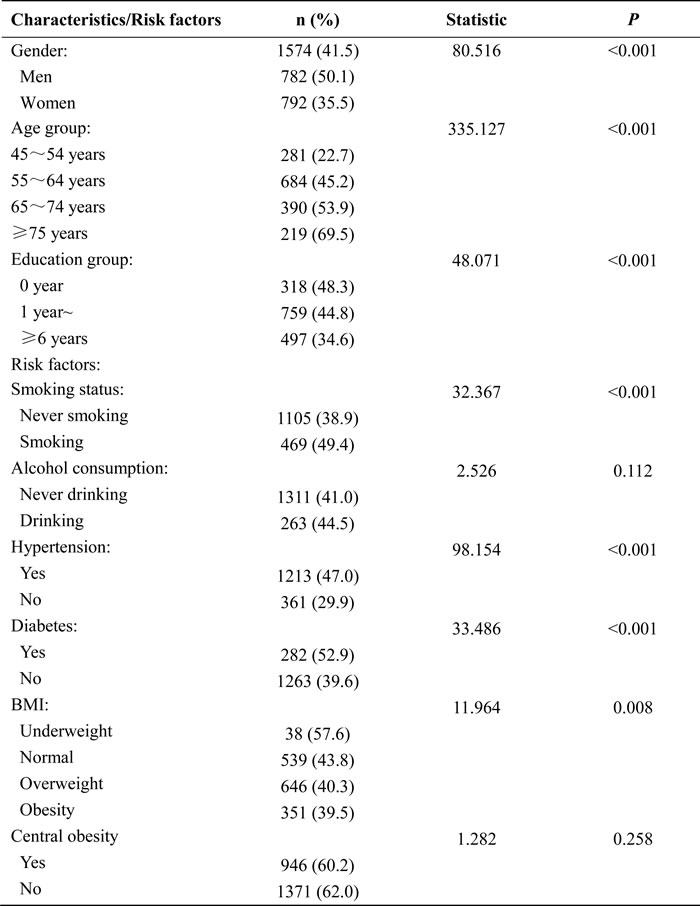 Table 3: The differences in measurements of risk factors between presence and absence of carotid plaque in this population.

The prevalence of carotid plaque in the stratified analysis

Table 4: The prevalence of carotid plaque by BMI for all participants in this study. 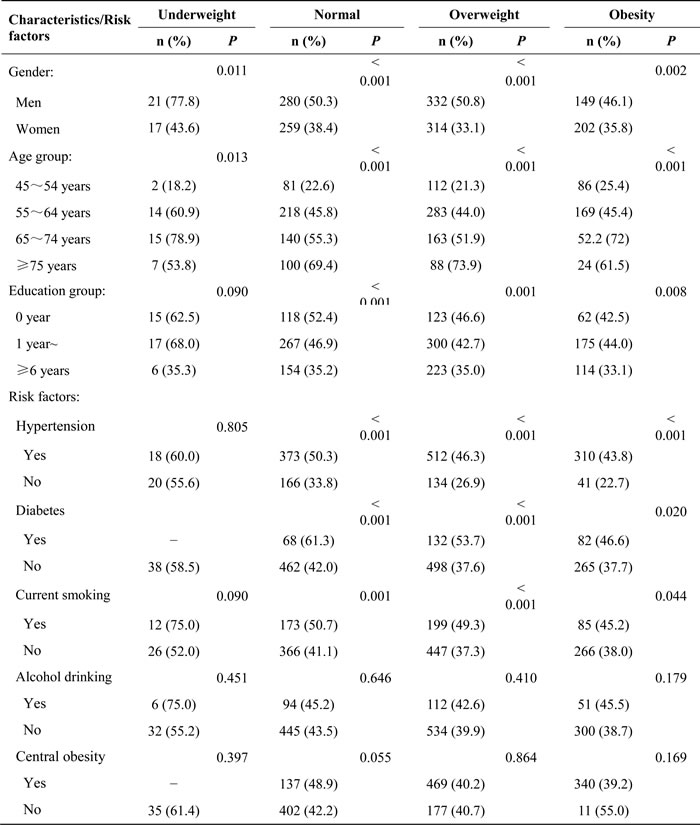 Table 5: The mean value of measurements in groups with or without carotid plaque by BMI group. 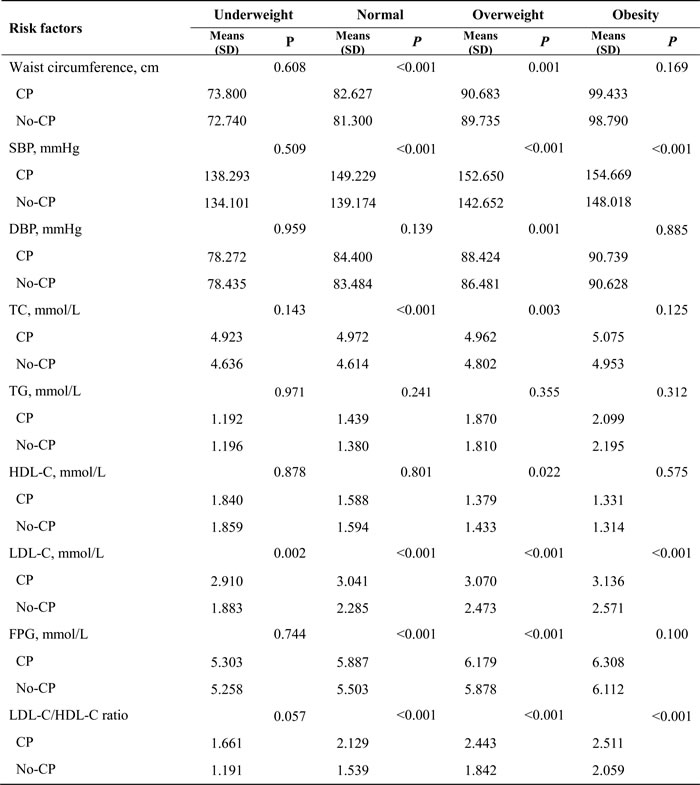 The relationship between serum lipid profiles and carotid plaque has been widely studied worldwide. However, there are conflicting results with respect to the relationship between LDL-C and carotid plaque. Mi et al. [23] reported that LDL-C had no significant association with CP. They recruited 22,222 urban or rural residents who were at high risk of stroke and not using any drugs that might affect serum lipids. After controlling for age, sex, education, traditional risk factors, history of stroke, and family history of stroke, a multivariate analysis showed no association between carotid plaque and LDL-C (OR, 0.976; 95% CI, 0.914-1.043; P = 0.475). In contrast to those results, Yang et al. [19] concluded that LDL-C was a risk factor for carotid plaque presence (OR, 1.325; 95% CI, 1.046-1.821; P = 0.033) in a multivariate model in which the presence of carotid plaque was the dependent variable and age, LDL-C, and HDL-C were the independent variables. The results of the present study showed that LDL-C was a strong risk factor for carotid plaque among the four weight groups. The risk of carotid plaque developing increased by ≥41% for each 1-mmol/L increase in the serum concentration of LDL-C. The underlying mechanism might be explained by oxidized LDL-C, which could enter and accumulate within the arterial walls and be involved in the inﬂammatory process in atherosclerosis [24].

In addition, although previous studies have shown that education level [6], cigarette smoking [6, 9, 10, 12-14], DBP [26, 27], HDL-C [10, 19], and the LDL-C/HDL-C ratio [10, 19] were predictors of carotid plaque, no significant link between carotid plaque and education level, cigarette smoking, DBP, HDL-C, or the LDL-C/HDL-C ratio was observed in this study. This finding might be explained by the fact that the previous study did not analyze the association between those variables with carotid plaque after stratification by BMI, which could have led to the disappearance of statistical significance.

This study has some limitations. (1) An inherent limitation of our cross-sectional study design is that it cannot determine the causal correlation between carotid plaque and the variables found to be significant; thus, further longitudinal studies are warranted to determine causality. (2) The study population consisted of low-income adults ≥45 years living in a rural area of northern China, so the conclusions of the present study may not be generalizable to other populations. However, considering that low-income, rural residents comprise > 50% of the total population of China, the results of the present study are important for further study. (3) We did not collect information regarding medication use for all subjects; however, due to the participants’ low socioeconomic status, the frequency of medication use was lower in this population, so it is likely that it did not affect the validity of the present results.

LDL-C was a strong independent risk factor for carotid plaque among all groups. Therefore, the findings of this study suggest that it is necessary to control LDL-C in this population. In addition, controlling SBP and FPG will also assist in reducing the carotid plaque risk. Furthermore, our study provided specific information for clinicians regarding specific preventive strategies for different populations by BMI.

The present study was a population-based, cross-sectional study conducted from April 2014 to January 2015. The enrolled population was from the Tianjin Brain Study [28-31]. In brief, the total population comprised 14,251 participants from among 18 administrative villages in rural Tianjin, China. About 95% of participants were low-income farmers, with an average disposable annual income < $1600 US in 2014 [32]. Residents aged ≥45 years without CVDs were included in this study, while those with a previous history of CVD were excluded.

All investigative protocols were approved by the ethics committee of Tianjin Medical University General Hospital; the methods were carried out in accordance with the approved guidelines, and informed consent was obtained from all participants.

All variables in this study were obtained by trained epidemiological researchers through face-to-face interviews. A pre-specified questionnaire was used to collect all information for this study.

Demographic information, including name, sex, date of birth, and educational level, were derived from previous records. All participants were separated into four age groups: 45-54 years, 55-64 years, 65-74 years, and ≥75 years. Educational level was classified into three groups according to the length of the individuals’ formal education: illiteracy (without a formal education), 1-6 years group, and > 6 years group.

Measurements of blood pressure (including SBP and DBP), height, and weight were measured in the local village clinic during the baseline survey; levels of FPG, TC, TG, HDL-C, and LDL-C in the serum were assessed at the Ji County People’s Hospital. Carotid ultrasonography and 12-lead echocardiography were also conducted by a professional. BMI was calculated as the participant’s weight (kg) divided by the square of height (m2).

One trained technician blinded to individuals’ previous disease histories performed all ultrasound examinations. The patients were examined when they were in the supine position using B-mode ultrasonography (Terason 3000; Burlington, MA, US) with a 5-12-MHz linear array transducer. Plaques are focal structures that encroach into the arterial lumen by at least 0.5 mm or 50% of the surrounding intima-media thickness, or demonstrate a thickness of > 1.5 mm, as measured from the intima-lumen interface to the media-adventitia interface [33]. Subjects with carotid plaque were defined as having at least one lesion, not based on the total number of carotid plaques.

Continuous variables were presented as means with standard deviations, and Student’s t-test or an analysis of variance was used to compare differences between two groups or multiple groups, respectively. Categorical variables were presented as numbers with frequencies and were compared using the chi-squared test. Multiple linear regression analyses were used to evaluate the associations between traditional risk factors and the presence of carotid plaques. We performed multivariate logistic regression analyses to evaluate the determinants of carotid plaque after adjusting for other confounding factors. The results are presented as adjusted ORs and 95% CIs. P values < 0.05 in two-tailed tests were considered statistically significant. SPSS for Windows (version 19.0; SPSS Inc., Chicago, IL, USA) was used for analyses.

The authors would like to thank all participants and local health workers.