Tumor-infiltrating immune cells and prognosis in gastric cancer: a systematic review and meta-analysis

Tumor-infiltrating immune cells are a pivotal component of the tumor microenvironment (TME), but their indicative role remains poorly defined. A meta-analysis was performed to reveal the prognostic efficiency of tumor-infiltrating immune cells in gastric cancer (GC). By searching PubMed and Embase, we identified a total of 35 eligible articles that involved 4888 patients. Random or fixed effect models were employed to extract pooled hazard ratios (HRs) with 95% confidence intervals (CIs). Our results indicated that high CD3+ lymphocyte infiltration in all the locations (AG), the tumor nest (TN), and the tumor stroma (TS) predicted better overall survival (OS) (HR=0.71, 95% CI=0.57-0.90; HR=0.58, 95% CI=0.42-0.80; and HR=0.50, 95% CI=0.37-0.68, respectively). CD8+ T cell infiltration in AG and FoxP3+ regulatory T cells (Tregs) in the tumor invasive margin (TM) were also associated with improved OS (HR=0.90, 95% CI=0.83-0.97; HR=0.65, 95% CI=0.48-0.87, respectively). However, contrasting results were found in the macrophage subset, with M2 in AG (HR=1.45, 95% CI=1.13-1.86) and the TN (HR=1.67, 95% CI=1.12-2.48) associated with worse OS. In summary, the combination of the densities and locations of tumor-infiltrating immune cells can be useful for predicting survival for GC patients, but additional research is needed to reinforce the reliability of this study’s conclusions.

Gastric cancer (GC) is one of the most common malignancies. Its incidence and mortality rates ranked fifth and second in 2013, respectively, placing a heavy burden on the public health system worldwide, especially in East Asian countries [1, 2]. Diagnosis and treatment strategies are based on the TNM staging system, which has been revised and perfected over the past 80 years. However, the prognosis of GC can be affected by several factors, such as tumor volume, patient age, and nutrition status. Thus, GC patients with the same TNM stage can have different clinical outcomes, causing unreliability in the TNM staging system for prognosis assessments. A new method to improve the accuracy of the TNM staging system is urgently needed.

Immune cells are a major component of the tumor microenvironment and come in multiple types with different functions. CD3 is a marker of T lymphocytes, including CD4+ T helper lymphocytes, CD8+ cytotoxic T lymphocytes, and FoxP3+ regulatory cells (Tregs). CD8+ T cells are cytotoxic and kill target tumor cells or promote tumor destruction via secretion of effector cytokines such as interferon-c or tumor necrosis factor [3, 4]. CD4+ helper T lymphocytes are required for the induction and maintenance of CD8+ T cells [5]. FoxP3+ Tregs suppress antitumor responses and maintain immunological tolerance to host tissues [6]. Similarly, tumor-associated macrophages (TAMs) can be divided into M1 (classically activated) and M2 (alternatively activated) cells. M2 cells promote tumor growth and progression and help subvert adaptive immunity [7]. However, recent reports have indicated that the presence of CD4+ helper T lymphocytes, FoxP3+ Tregs and M2 cells can lead to favorable outcomes in certain tumor patients [8-11]. Therefore, it is necessary to summarize the current progress regarding what is known of the relationship between tumor-infiltrating immune cells and the prognosis of cancer patients.

After screening, 35 articles were included in the meta-analysis (Figure 1). The basic characteristics of each study are presented in Table 1 and Supplementary Table 1 [9, 10, 17-49]. Among the 35 articles, 28 articles reported tumor-infiltrating lymphocytes, including CD3+ T cells (n=8), CD4+ helper T cells (n=6), CD8+ cytotoxic T cells (n=12), CD20+ B cells (n=2), CD45RO+ memory cells (n=2), FoxP3+ regulatory T cells (n=16), t-bet+ cells (n=2), dendritic cells (n=3), granzyme B cells (n=2), and natural killer cells (n=2). Twelve studies contained macrophages, which have two polarizations, M1 (n=2) and M2 (n=6). And CD11c/iNoS were identified as the marker of M1 and CD163/CD206 were identified as the marker of M2. The cell counting locations can mainly be divided into three categories: the tumor nest (TN), the tumor stroma (TS) and the tumor invasive margin (TM). In addition, in certain included articles, immune cells were counted without distinguishing among cell counting locations (such immune cell counts were incorporated into the data for all the location (AG)). 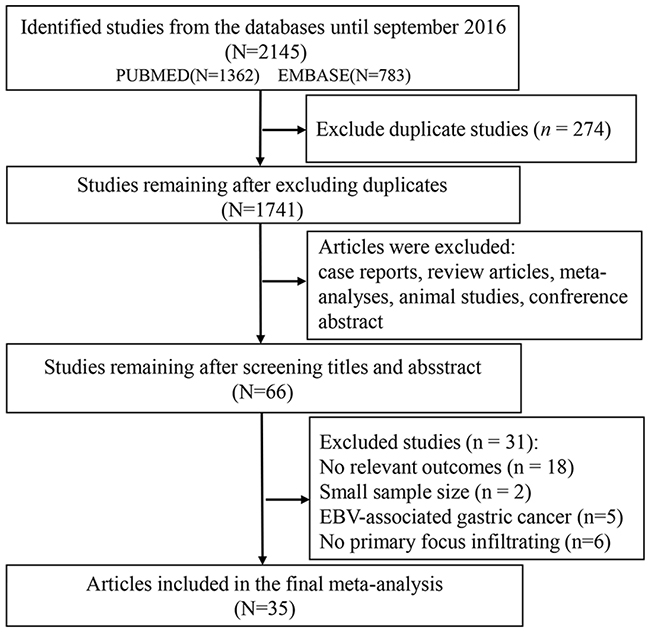 This meta-analysis included studies involving a total of 4888 patients from six countries, including China (n=13), France (n=1), Germany (n=1), Italy (n=3), Japan (n=10), and Korea (n=7). Nine studies included less than 100 patients, five articles contained more than 200 patients, and the remaining publications enrolled between 100 and 200 patients. The score of eligible articles ranged from 3 to 7, with 28 articles ≥5 and 7 articles <5. Hazard ratios (HRs) for overall survival (OS) and DFS/RFS (disease-free survival/relapse-free survival) of 5 articles were estimated through survival curves. The main methods for detecting specific tumor-infiltrating immune cells included immunohistochemistry (IHC), tissue microarray (TMA) and immunofluorescence (IF). The most frequently used cut-off values to distinguish positive and negative (high and low) tumor infiltration was the median level, mean level or a certain specific value determined by counting under the microscope. 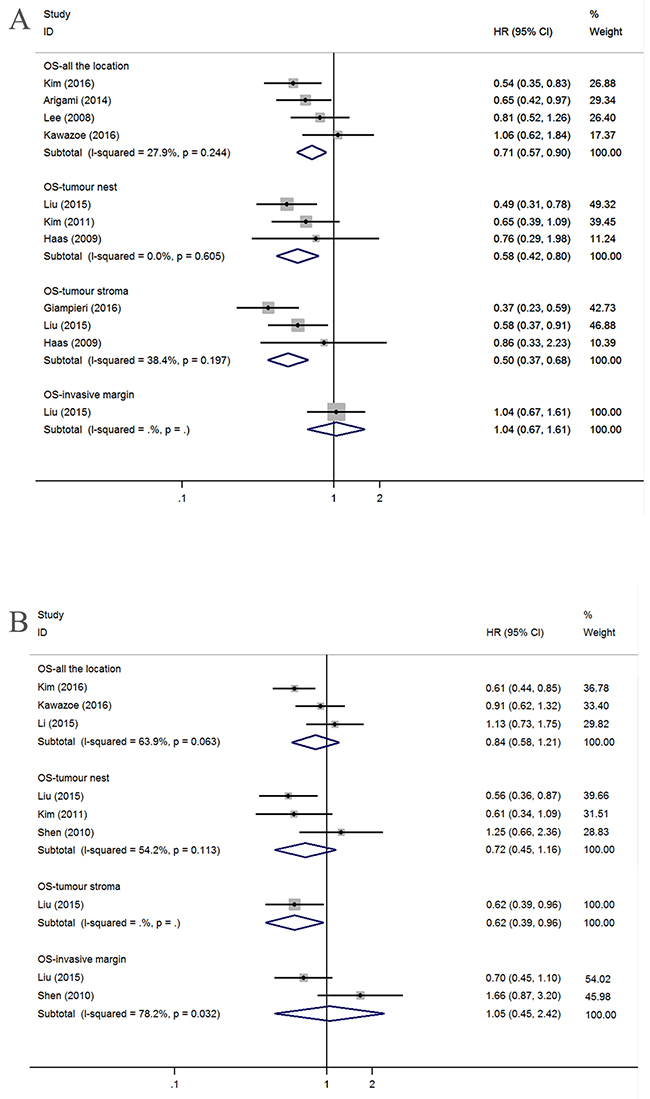 Figure 2: Forest plots of HRs to assess the correlation between prognosis and tumor-infiltrating immune cells. (A) OS and CD3+, (B) OS and CD4+. 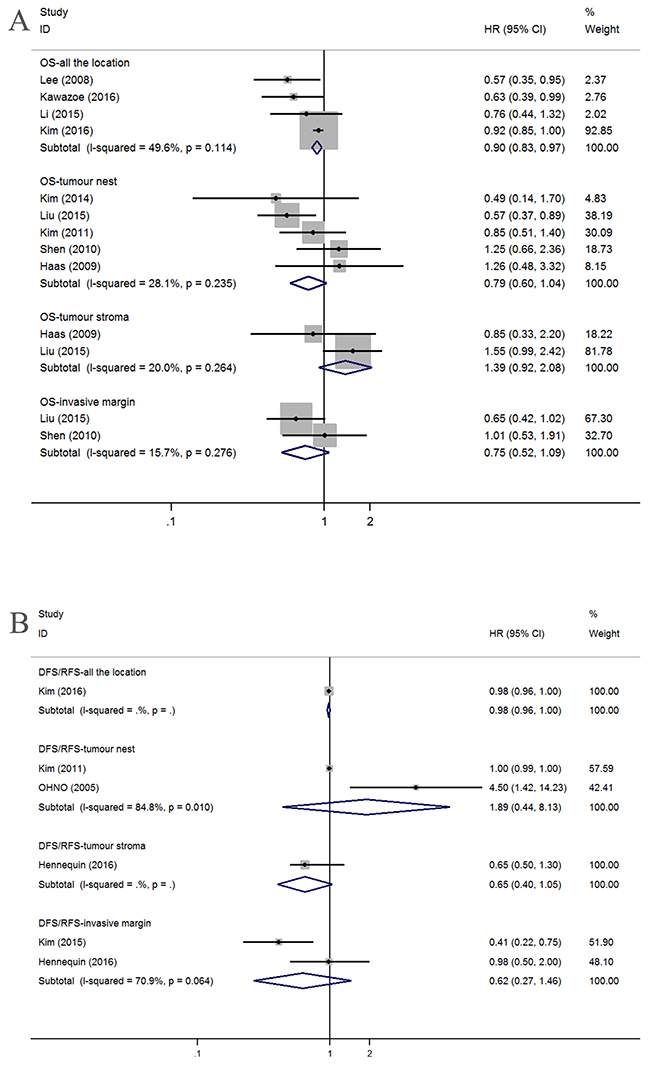 Figure 3: Forest plots of HRs to assess the correlation between prognosis and tumor-infiltrating immune cells. (A) OS and CD8+, (B) DFS/RFS and CD8+. 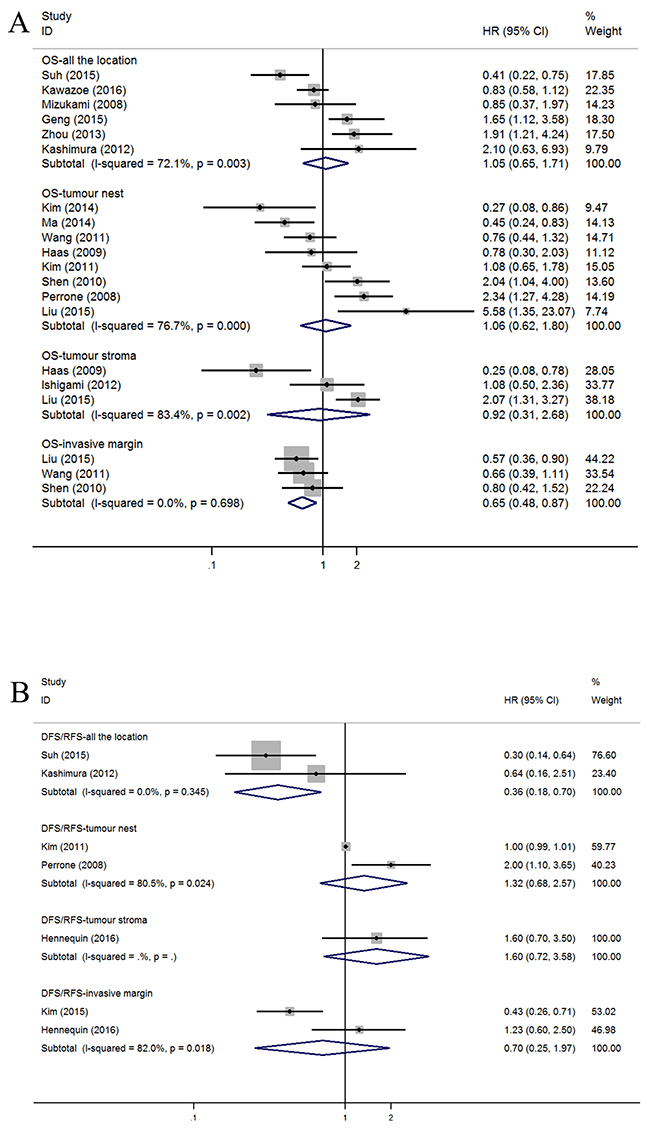 Figure 4: Forest plots of HRs to assess the correlation between prognosis and tumor-infiltrating immune cells. (A) OS and FoxP3+, (B) DFS/RFS and FoxP3+.

Figure 5: Forest plots of HRs to assess the correlation between prognosis and tumor-infiltrating immune cells. (A) OS and M, (B) DFS/RFS and M, (C) OS and M2.

Table 2: The pooled relationships between tumor-infiltrating immune cells subsets and the prognosis of patients with gastric cancer. 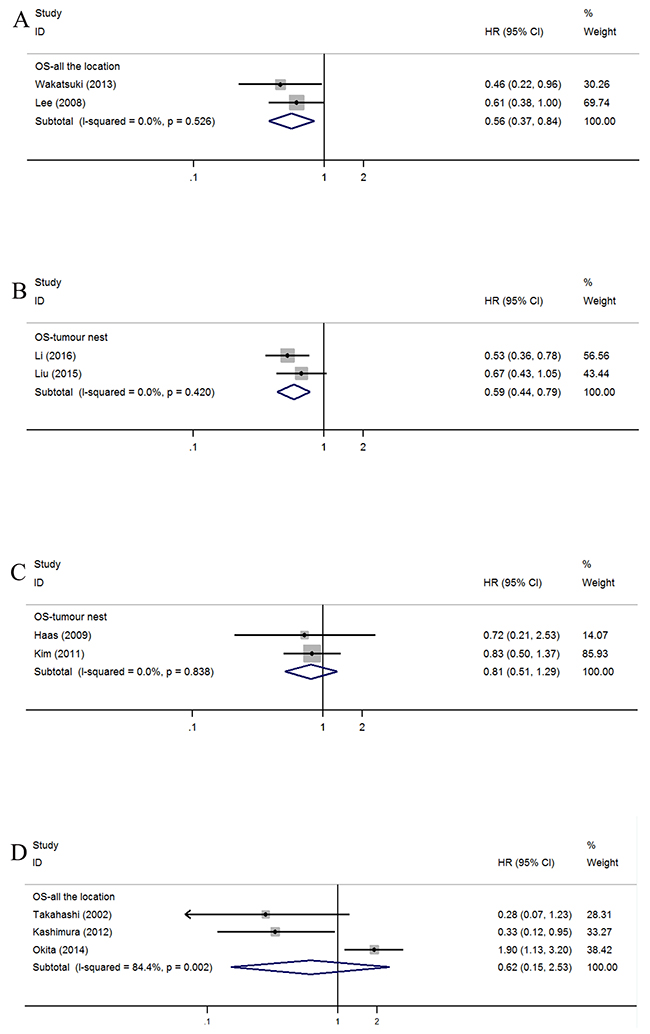 Figure 6: Forest plots of HRs to assess the correlation between prognosis and tumor-infiltrating immune cells. (A) OS and CD45RO+, (B) OS and CD57+, (C) OS and Granzyme B (D) OS and Dendritic cell.

Because obvious heterogeneity was found in the TN group of FoxP3+ Treg cells, subgroup analyses were conducted to seek the source of this heterogeneity. Ethnicity, publication year, score, tumor stage and identification number were adopted as the basis for grouping (Table 4). In the group “publication before 2011,” worse OS was associated with high level of FoxP3+ Treg lymphocytes (HR=1.82, 95% CI=1.21-2.74; I2=47.10%, P=0.151). However, heterogeneity was still significant in other subgroups (Table 4). No individual study could alter the overall trend when it was removed from the meta-analysis of Foxp3+ cell infiltration in the TN panel.

Table 4: Subgroup analysis of correlation between prognosis and FoxP3+ Treg cell infiltration in the TN 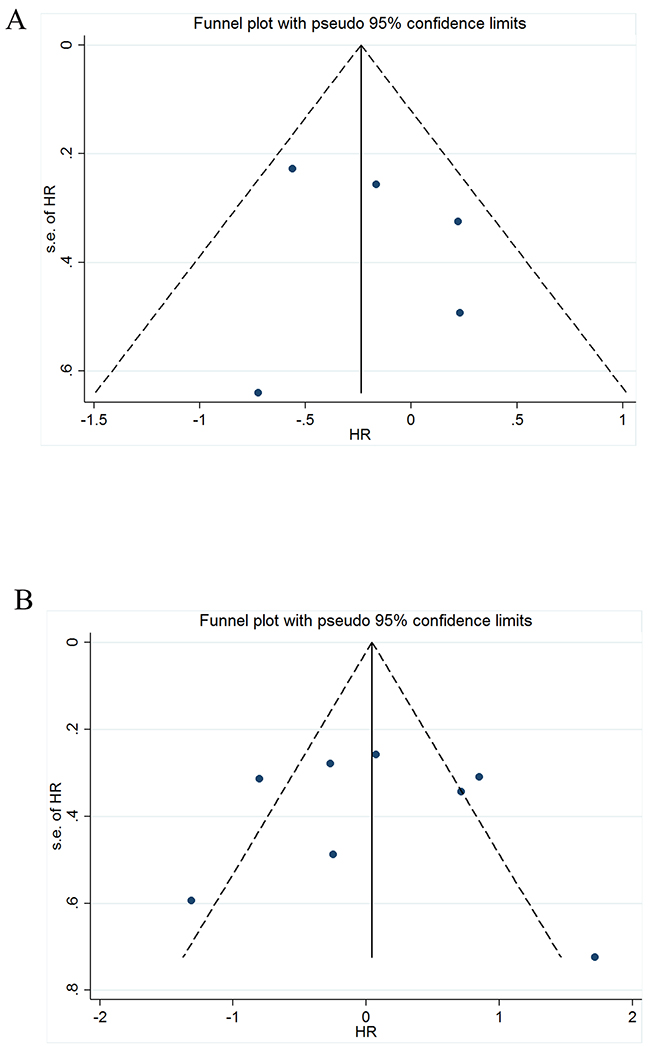 It is interesting that the prognosis of the same immune cells can vary according to different locations of infiltration. For example, a high density of CD8+ T cells in the AG is associated with better OS and has no predictive effect on prognosis in TN, TS and TM. The tumor microenvironment varies in different locations, which may cause differences of the functions of the same immune cell. The TN is mainly composed of tumor cells, which are antigens for immune cells. Tumor cells can exhaust T cells by expressing coinhibitory molecules, such as CTLA-4 and PD-L1 [52]. However, in the TS, microvessels and fibroblasts are the main support components for promoting angiogenesis and tumor metastasis, and the function of immune cells can be limited by TS components [3]. Therefore, it is not surprising that in a previous meta-analysis, a high density of foxp3+ Treg cells benefited from 1-, 3-, and 5-year OS after surgical resection [53]. However, when stratifying according to infiltrating locations, no predictive relationships were found between OS and FoxP3+ Treg cells in different infiltrating locations, such as the TN. Galon et al [16, 54] suggested that this can improve the accuracy of the prediction of patients’ survival by the combined analysis of tumor-infiltrating regions, and it is important to take the effect of tumor microenvironment into consideration.

However, summary HRs of certain locations show negative relationships between the density of immune cells and prognosis. This may result from the restriction of the number of available studies and the vast difference between the original results. For example, only three studies involved the infiltration of CD4+ T cells in TN, and one study suggested that the high density of CD4+ T cells can benefit OS [9]. However, two studies showed that CD4+ T cells are not associated with OS [32, 43]. Therefore, further studies that utilize uniform pathology standards are needed to support this conclusion.

The pooled results need to be examined from different perspectives because of several limitations. First, statistical errors are inevitable because some HRs of OS and DFS/RFS were obtained from Kaplan–Meier (KM) curves, though two researchers examined data from one curve to minimize the error. Second, vast differences resulting from different regions, genders, pathologic types, and status of microsatellite instability (MSI) may also influence the differences from the original results [22, 38, 41]. Third, we failed to include some potential studies that could have been extrapolated from other studies or conference abstracts without sufficient data.

In conclusion, the density of immune cells in different locations combined with histopathological evaluation can be used as a prognostic marker. With further research, the relationship between density, the location of tumor-infiltrating immune cells and GC patients’ clinical outcome will become clearer.

We performed our meta-analysis by searching PubMed and Embase with a cut-off of September 2016. The search terms were as follows: (lymphocytes or immune cells) AND (gastric OR stomach) AND (survival OR prognosis OR prognostic). Abstracts and titles were read by two researchers who used the samecriteria to exclude irrelevant articles. The full texts of remaining articles were carefully screened to find all eligible articles to avoid unnecessary basis. Nonconformity between the two reviewers was resolved through discussions among all authors in this meta-analysis.

We selected eligible articles in this meta-analysis according to the following criteria: (1) evaluation of the infiltration of immune cells, such as CD3+ lymphocytes, CD4+ lymphocytes, CD8+ lymphocytes, Foxp3+ Tregs, natural killer cells and macrophages, into primary gastric tumors; (2) examination of ≥50 samples; (3) evaluation by immunohistochemical staining (tissue microarrays) or immunofluorescence; and (4) presentation of OS or DFS or RFS values for high (positive) and low (negative) immune cell infiltration density that were either specifically stated or depicted using Kaplan–Meier curves.

Integrated calculation of the extracted data in this meta-analysis was performed using Stata 14.0 software. For time-to-event outcomes, HRs along with 95% CIs were pooled to measure the correlation between tumor-infiltrating immune cell density and prognosis. When Kaplan–Meier curves were provided instead of HR, two researchers independently estimated the HR indirectly from the curves using Engauge Digitizer version 9.0 according to the methods described by Tierney et al [58, 59]. The chi-square test and I2 statistic were used to assess heterogeneity [60]. Heterogeneity was thought to exist when P<0.05 and/or I2>50%; in such cases, a random-effects model was used. Then, to identify the source of heterogeneity, subgroup analysis was employed. Publication bias was examined by performing Begg’s and Egger’s tests and evaluating the symmetry of the funnel plot [61].

This study was supported by grants from the National Natural Science Foundation of China (No.81272655), the Research Fund for Public Welfare in the Health Industry, Health Ministry of China (No. 201402015) and Clinical Research Physician Program of Tongji Medical College, HUST.