Obesity, a clinical condition characterized by the excessive accumulation of body fat, is a strong risk factor for type 2 diabetes [1, 2]. PPARγ is one of the key transcription factors that regulate and promote adipogenesis, and its agonists such as rosiglitazone and pioglitazone exerted significant hypoglycemic effects [3]. However, one significant side effect of PPARγ agonists is bodyweight gain in both clinical studies and animal experiments [4, 5]. Transgenic mice with adipose-specific overexpression of PPARγ display obesity and increased global insulin sensitivity, and are protected against high fat diet (HFD)-induced insulin resistance and hyperglycemia [6]. In support, specific deletion of PPARγ in adipose causes lipodystrophy, global insulin resistance and hyperglycemia in mice [7]. This paradox of obesity and type 2 diabetes suggested that more studies are still needed to explore the role of adipose tissues in the development of type 2 diabetes under obese condition. Adipose dysfunction is also called adiposopathy or sick fat, which is mainly characterized by increased lipolysis and disturbed adipokine expression profile. Obese patients with adipose dysfunction are at higher risk of type 2 diabetes than those without adipose dysfunction [8–16]. When chronic exposure to excessive nutrients, expansion and adipogenesis of preadipocytes are necessary for storing lipid or glucose as TG [11, 14, 17]. Under the condition of excessive nutrients, an impairment in the capacity of preadipocyte adipogenesis will cause adipose dysfunction, leading to ectopic lipid deposition and disturbed adipokine expression/secretion [8, 18]. 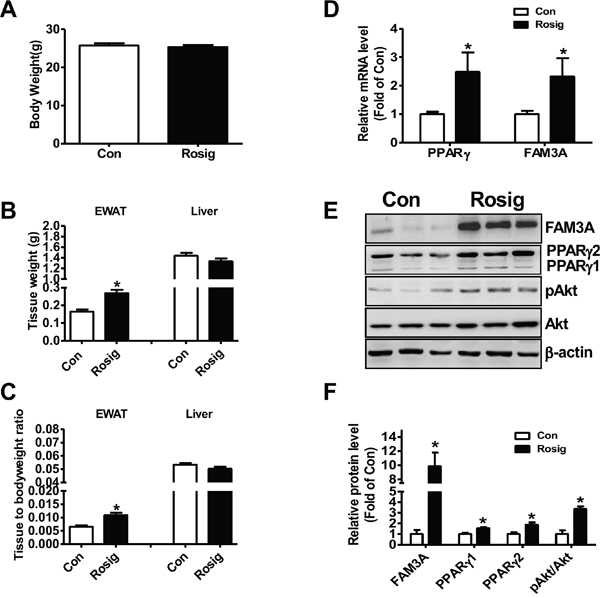 FAM3A expression was increased during the adipogenesis of 3T3-L1 preadipocytes

To further confirm that FAM3A is involved in adipogenic process, its expression in differentiated 3T3-L1 preadipocytes was determined. When compared to the normally differentiated 3T3-L1 cells, Oil Red O staining revealed that rosiglitazone induced more neutral lipid deposition on differentiation Day 4 and Day 8 (Figure 2A). In normally differentiated 3T3-L1 cells, the mRNA levels of PPARγ and FAM3A were increased on Day 4 and Day 8 (Figure 2B, 2C) when compared with that on Day 0. Moreover, rosiglitazone induced further elevation in PPARγ and FAM3A mRNA levels when compared with normally differentiated cells (Figure 2B). The protein levels of PPARγ2 and FAM3A were increased (Figure 2C, 2D), whereas that of PPARγ1 remained unchanged during adipogenesis of 3T3-L1 cells (Figure 2C, 2D). pAkt level was increased on Day 4 and Day 8 when compared with Day 0. Rosiglitazone induced further elevation in PPARγ2 and FAM3A protein levels on Day 4 and Day 8, but only induced further increase in pAkt level on Day 4 but not Day 8 (Figure 2C, 2D). The mRNA levels of adipokines including aP2, CEBP/α, CEBP/δ, adiponectin and resistin were elevated during the adipogenesis of 3T3-L1 cells (Supplementary Figure 1). The mRNA levels of aP2, CEBP/α, adiponectin and resistin were further induced by rosiglitazone in 3T3-L1 cells (Supplementary Figure 1). 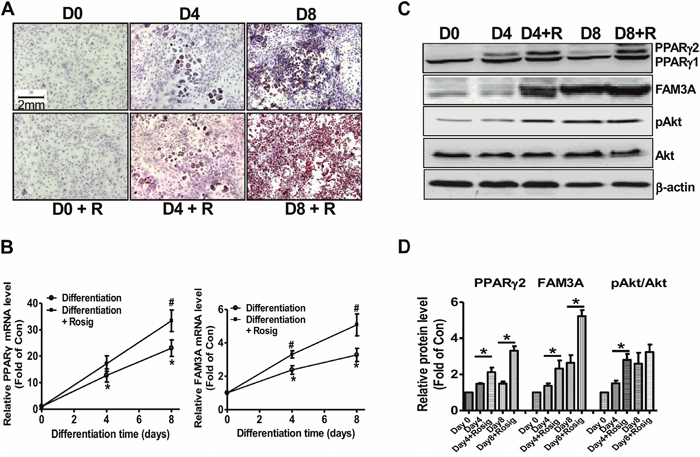 To directly evaluate the impact of FAM3A on the adipogenesis of 3T3-L1 preadipocytes, its expression was knockdown using siRNA interference. FAM3A mRNA level was reduced about 67% in 3T3-L1 preadipocytes after siFAM3A treatment for 24 hours, and remained lower on Day 4 and Day 8 when compared with control cells (Figure 3A). FAM3A knockdown reduced the mRNA level of PPARγ on Day 4 and Day 8 (Figure 3A). siFAM3A treatment significantly reduced the protein levels of FAM3A, PPARγ2 and pAkt on Day 0, Day 4 and Day 8 when compared with control cells. Oil Red O staining and quantitative assays revealed that FAM3A silencing significantly reduced neutral lipid deposition and adipogenesis of 3T3-L1 cells on Day 4 and Day 8 (Figure 3C, 3D). FAM3A silencing reduced the mRNA levels of adipokine aP2, C/EBPα, adiponectin and resistin, whereas it had little effect on that of C/EBPδ in 3T3-L1 cells on Day 8 (Supplementary Figure 2A-2E). FAM3A silencing reduced adiponectin secretion on Day 4, whereas it reduced resistin secretion on Day 4 and Day 8 in 3T3-L1 cells (Supplementary Figure 2F, 2G). 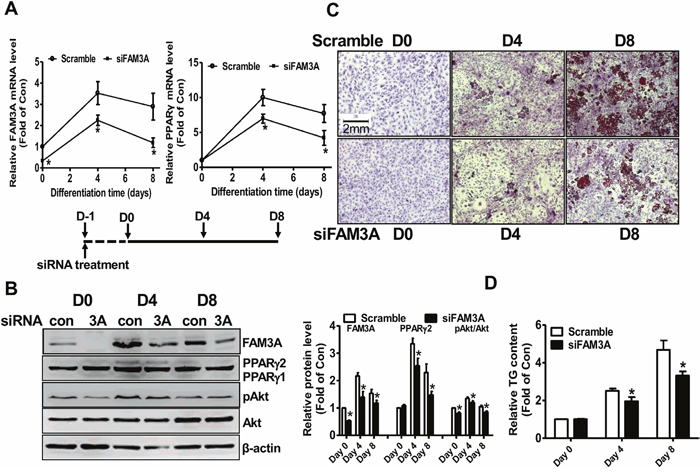 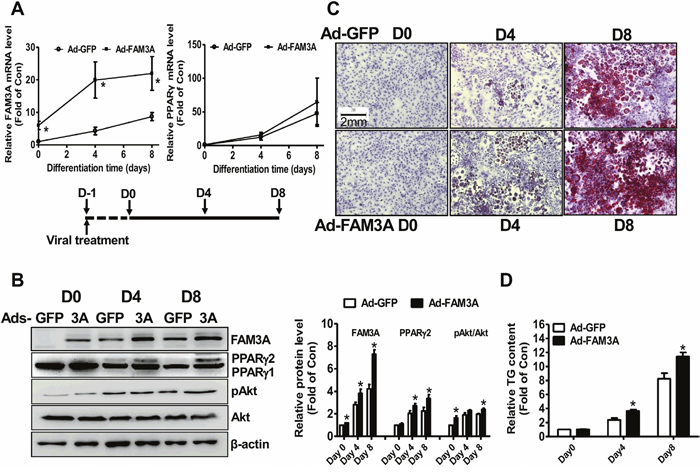 Figure 4: FAM3A overexpression enhanced the differentiation of 3T3-L1 preadipocytes. (A) Ad-FAM3A treatment on the mRNA levels of FAM3A and PPARγ in 3T3-L1 cells. (B) Ad-FAM3A treatment on the protein levels of FAM3A and PPARγ in 3T3-L1 cells. Representative gel images were shown in left panel, and quantitative data shown in right panel. (C) Representative images of differentiated 3T3-L1 cells with Oil Red O staining after Ad-FAM3A or Ad-GFP treatment. (D) Quantitative analysis of TG levels in differentiated 3T3-L1 cells. N=5-8, *p<0.05 versus control groups treated with Ad-GFP at the corresponding time point. 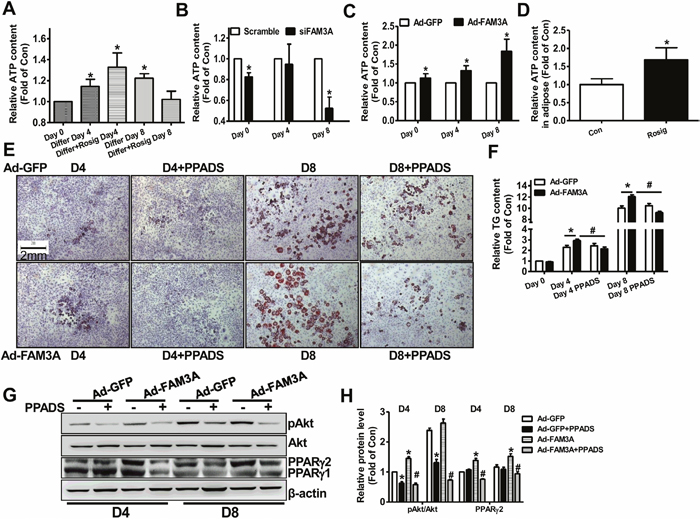 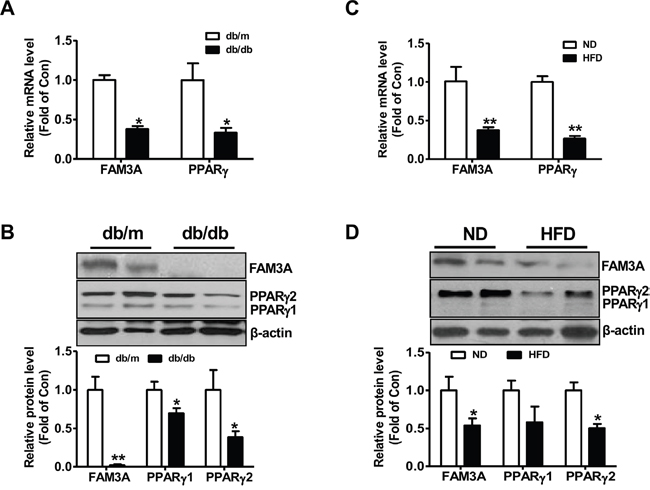 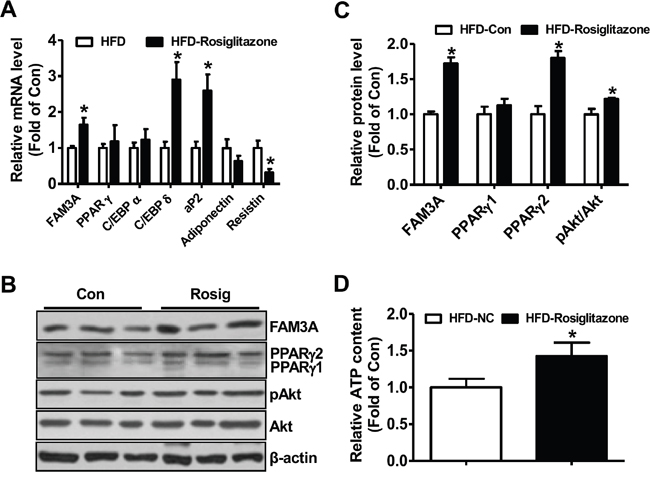 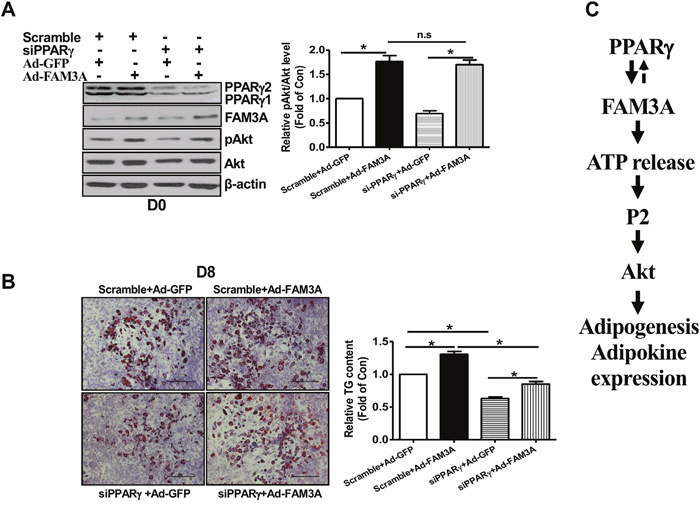 Regarding the role of FAM3A regulating adipogenic process, several issues should also be noted. FAM3A silencing inhibited the adipogenesis and adipokine expression/secretion in 3T3-L1 preadipocytes. However, although FAM3A overexpression enhanced the adipogenesis of 3T3-L1 preadipocytes, it failed to further increase adipokine expression/secretion. It is possible that adipokine expression are already at high levels during the adipogenesis, thus FAM3A overexpression fails to further elevate their levels in 3T3-L1 cells. Mice with adipose-specific deletion of PPARγ exhibit lipodystrophy and dramatically decreased serum adiponectin and resistin levels when compared with wild type mice [7]. In contrast, although mice with adipose-specific overexpression of PPARγ exhibit increased adipose mass, the serum adiponectin and resistin levels remained unchanged when compared with wild type mice [6]. Although FAM3A is a target gene of PPARγ, overexpression or silencing of FAM3A increases or decreases PPARγ2 protein level during adipogenesis. It had been reported that Akt activation upregulated PPARγ expression and activity by inactivating FOXO1 or activating mTOR during the adipogenesis of 3T3-L1 cells [31–34]. Our result further indicated that FAM3A-induced Akt activation is not dependent on PPARγ at the beginning of 3T3-L1 differentiation. So, FAM3A-mediated increase in PPARγ2 expression is likely due to long term Akt activation. It is also possible that an increase in PPARγ2 protein level is the consequence of 3T3-L1 preadipocyte maturation in case of FAM3A overexpression. Overall, there is a cross-talk between FAM3A and PPARγ2 expression during preadipocyte differentiation. It had been previously reported that in adipose tissue of fasting mice, PPARγ2 protein was reduced, whereas PPARγ1 protein remained unchanged when compared with that of fed mice [35]. Mice with PPARγ2 deletion exhibit reduced white adipose tissues when compared with wild type mice [36]. These findings suggested that PPARγ2 plays a crucial role in the regulation of preadipocyte adipogenesis. It should also be noted that FAM3A expression may also be regulated by other factors such as nutrients, other transcription factors or miRNAs beyond PPARγ during preadipocytes adipogenesis. Further study are still needed to clarify this crosstalk and its precise role in preadipocyte adipogenesis using mice with specific deletion of FAM3A and/or PPARγ in white adipose tissue in the future.

In summary, FAM3A plays important roles in regulating preadipocyte adipogenesis via the enhancement of ATP production, which activates Akt proliferative pathway(s) through P2 receptors. Under obese condition, a decrease in FAM3A expression in adipose tissue could contribute to the development of adipose dysfunction and type 2 diabetes (Figure 8C).

Eight-week-old male C57BL/6 mice and 8 to 12-week-old male db/db and db/m mice on a C57BSK background (Jackson Laboratory, USA) were used in this study. db/db and db/m mice were age matched. C57BL/6 mice were fed with a 45% high fat diet (HFD) or normal diet (ND) for 12 weeks [20]. Normal or HFD-fed C57BL/6 mice were daily administrated with rosiglitazone (AVANDIA, 30 mg/kg/day) for 30 days (Control mice were administrated with saline). Adipose tissues in this study are referred to be the epididymal white adipose tissues. All procedures involving experimental animals were approved by the Institutional Animal Care and Use Committee of Peking University Health Science Center that complies with the Guide for the Care and Use of Laboratory Animals published by the US National Institutes of Health (NIH Publication No. 85–23, revised 1996).

Overexpression or knockdown of FAM3A in 3T3-L1 preadipocytes

At Day 0, Day 4 and Day 8 after induction, 3T3-L1 cells were fixed with 4% formaldehyde for 30min and then subjected to Oil Red O staining for 1 h to visualize neutral lipid deposition in the cells. Relative intracellular TG content was quantified by eluting Oil Red O staining with 100% isopropyl alcohol and measured at 570 nm with a microplate reader.

Total RNA of cells and tissues were isolated using TRIzol reagent (Invitrogen). The complementary DNA was synthesized using RevertAid First Strand cDNA Synthesis Kit (Thermo). Quantitative PCR was performed with the Biorad System using SRBR Green 1 (TOYOBO) as a fluorescent probe. Target gene mRNA level was normalized to that of β-actin in the same sample as described previously using 2-ΔΔCt methods [19, 20]. All of the primer sequences used in this study are listed in Supplementary Table 2.

Adipose tissues and cells were lysed in Roth lysis buffer. 60μg cell protein and 80μg adipose tissue protein were separated by 12% SDS-PAGE, and then transferred to the NC (nitrocellulose filter) membrane. The membrane was incubated in 1:500-1:1000 primary antibody. Primary antibodies were: anti-PPARγ antibodies (Santa Cruz Biotechnology, sc-7196), anti-FAM3A antibodies (Sigma), anti-pAkt (Ser473) and anti-Akt antibodies (Cell Signaling Technology). After incubated with the second antibody, the membrane was exposed to ECL. After immunoblotting assays, the membrane was stripped with 0.2N NaOH and re-probed for β-actin as loading controls.

Cell culture medium of 3T3-L1 cells on differentiation Day 0, Day 4 and Day 8 were collected and centrifuged at 12000 rpm at 4°C for 5 minutes, and then the supernatant were maintained for determination of adipokine levels. The levels of adiponectin and resistin were determined using ELISA Kit (Cloud-Clone Corp. SEA605Mu and SEA847Mu) according to the manufacturer’s instruction.

Mitochondria were isolated from adipose tissue or 3T3-L1 cells using the Mitochondria/Cytosol Fractionation Kit (Pierce). In brief, 3T3-L1 cells or adipose tissue were homogenized in Mito-Cyto extraction buffer, and then the lysate was centrifuged twice at 800g for 5 minutes to pellet the nucleus and cell debris. The supernatant was collected and centrifuged at 10,000 g for 10 min to pellet mitochondria, and then the mitochondria were washed at least three times with lysis buffer to avoid cytoplasmic proteins contamination.

3T3-L1 preadipocytes were transfected with siRNA against both PPARγ1 and PPARγ2 (50 nM) or scrambled siRNA (50 nM) mixture using VigoFect (Vigorous Biotechnology, Beijing, China) for 24 hours, and then infected with Ad-GFP or Ad-FAM3A for 24 hours (Day 0). The infected cells were further induced for differentiation as above. The siRNA sequences were provided in Supplementary Table 1.

18. Moreno-Indias I, Tinahones FJ. Impaired adipose tissue expandability and lipogenic capacities as ones of the main causes of metabolic disorders. J Diabetes Res. 2015; 2015:970375.