Background: Cholangiocarcinoma (CCA) is highly resistant to chemo-therapy, including 5-fluorouracil (5-FU) treatment. MicroRNAs are endogenous and short non-coding RNAs that can regulate multiple genes expression. Many microRNAs have shown functional roles in the chemo-resistance of tumors. Here, we examined the relationship between microRNAs expression and the sensitivity of CCA cells to 5-FU.

Methods: Microarray analysis was used to determine the aberrantly expressed microRNAs in two 5-FU resistant CCA cell lines, KKU-M139 and KKU-M214 cells. To determine the effect of candidate microRNAs on 5-FU sensitivity, expression of candidate was modified via either transfection of a microRNA mimic or transfection of an antagonist. Ontology-based programs were also used to investigate the potential targets of microRNAs that were confirmed to affect the 5-FU sensitivity of CCA cells.

Results: The microRNA-106b (miR-106b) was significantly down-regulated in 5-FU resistant CCA cells. Instead, over-expression of miR-106b could re-sensitize resistant CCA cells to 5-FU through down-regulation of Zbtb7a. Moreover, decreased expression of miR-106b is related to poor prognosis in patients with CCA, suggesting its potential role as a new prognostic marker in CCA.

Conclusion: Our study demonstrates that miR-106b can reverse 5-FU resistance via Zbtb7a suppression, thus offer a novel and powerful strategy for CCA chemotherapy.

Cholangiocarcinoma (CCA) is one of the commonest malignant cancers around the word, and CCA-related death abruptly increased in the past decades [1]. Because of lacking the effective screening biomarkers, CCAs are often diagnosed along with lymph-node metastases [2]. Depressingly, almost all CCAs are resistant to chemotherapies, drug-resistance makes almost all CCA patients tending to be recurrence after surgical resection [3]. And the chemo-resistant rapidly increased the morbidity and mortality rates for CCA worldwide. Therefore, to clearly elucidate the mechanism of chemo-resistant in CCA and to enhance CCA tumors sensitive to chemotherapies remain an urgent requirement.

5-fluorouracil (5-FU) is a commonly used drugs for many types of tumors. Though multi-types of tumors are benefit from 5-FU treatment, the overall response rate in CCA patients to 5-FU is limited [4]. 5-FU resistance in many types of cancers is due to aberrantly expression of many oncogenes involving many processes in tumorigenesis, including cell proliferation, metastasis or metabolism [5]. 5-FU is the most commonest drugs for CCA treatment, to clarify the molecular mechanism of 5-FU resistance remains urgent requirement.

MicroRNAs (miRNAs) are small non-coding RNAs that modulate the target gene expression by directly binding to 3’UTR and therefore suppress the mRNA transcription. Functional studies have shown miRNAs to participate in almost every cellular process including apoptosis, proliferation and differentiation by directly modulating the expression of tumor suppressor genes and oncogenes [6]. Multiple microRNAs have been reported to regulate the progression, tumorigenesis and chemoresistance of CCA [7–11]. Therefore, it is urgent to identify and clarify the functional microRNAs in CCA.

In this study, we identified a novel aberrantly expressing microRNA, miR-106b, to modulate the 5-FU sensitivity of CCA cells through suppressing Zbtb7a expression. 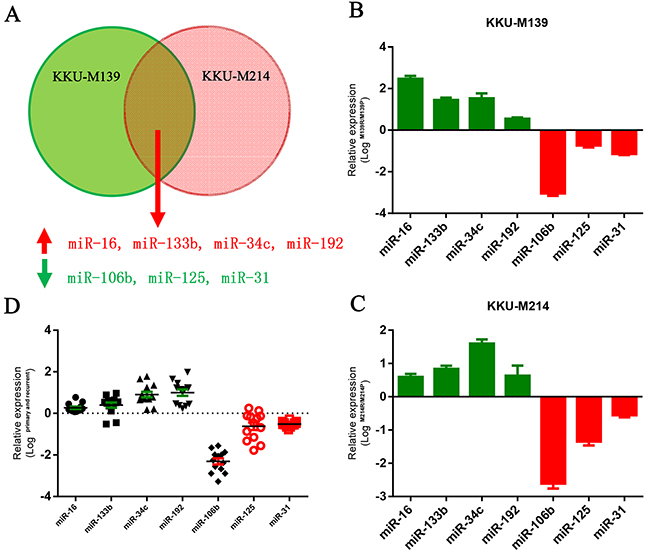 Figure 1: MiR-106b is downregulated in 5-FU resistant CCA cells and human tumor tissues. (A) Dysregulated microRNAs in 5-FU resistant KKU-M139 and KKU-M214 cells identified by microarray. (B and C) Aberrantly expressed microRNAs in KKU-M139 (B) and KKU-M214 (C) cells were confirmed by q-PCR. (D) The aberrantly expressed microRNAs were confirmed by q-PCR in primary or recurrent CCA tumors. qRT-PCR results were normalized by GAPDH. All data was shown as mean ± SEM from three independent experiments.

To explore whether miR-106b could re-sensitize the CCA cells to 5-FU, KKU-M139R (M139R) cells and KKU-M214R (M214R) cells were transduced with miR-106b mimics and then treated with different dose of 5-FU. Cell viability analysis showed that forced miR-106b expression rendered these two cell lines more sensitive to 5-FU (Figure 2A and 2B). The half maximal inhibitory concentration (IC50) values of M139R and M214R cells are about 42.5 uM and 38 uM, respectively (Figure 2A and 2B). As expected, miR-106b over-expression re-sensitized CCA cells to 5-FU (Figure 2C and 2D). Flow cytometry analysis also showed that miR-106b overexpression significantly induced more apoptotic M139R and M214R cells (Figure 2E and 2F). We further performed colony formation assay. As shown in Figure 2G and 2H, in the absence of 5-FU, miR-106b alone could decrease the number of colonies of M139R and M214R cells (Figure 2G and 2H). These results showed that suppression of miR-106b might render CCA cells resistant to 5-FU in vitro. To evaluate the effect of miR-106b on 5-FU resistance in vivo, stably miR-106b overexpressing M139R and M214R cells were injected subcutanenously into two groups of nude mice. The mice were also injected intraperitoneally with 30 mpk 5-FU every 5 days after the tumor volume reaching 100 mm3. As expected, the tumor growth was significantly reduced by miR-106b overexpression (Figure 2I and 2J). These results indicated that miR-106b sensitized resistant CCA cells to 5-FU in vivo. 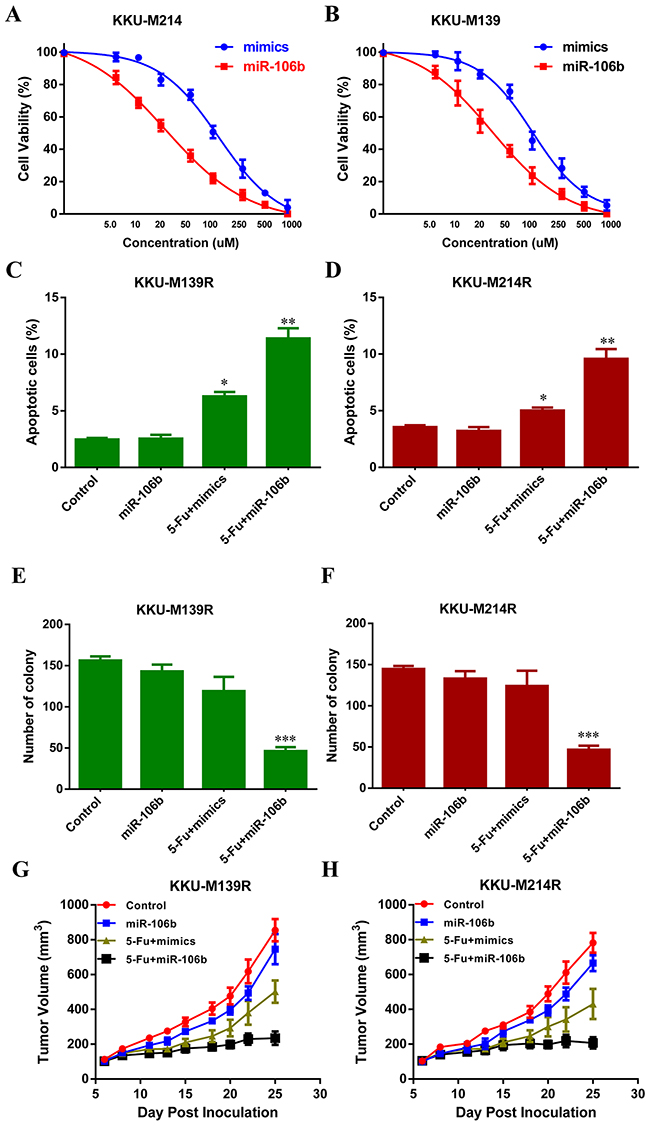 Zbtb7a is the direct target of miR-106b in CCA cells

To investigate how miR-106b modulate CCAs sensitive to 5-FU, we performed bioinformatics analysis by using the publicly acailable database miRWalk. Zbtb7a was predicted to be one of the potential target genes of miR-106b. Next, we constructed luciferase reporter plasmids which contained wild type or mutant Zbtb7a 3’-UTR. Luciferase reporter assays demonstrated that exogenous miR-106b repressed the luciferase activity of wild type 3’-UTR of Zbtb7a, but not the luciferase activity of mutant 3’-UTR of Zbtb7a (Figure 3A). In contrast, inhibition of miR-106b with miR-106b antagonist increased the activity of luciferase reporter fused to the wild type 3’-UTR but not the mutant UTR (Figure 3B). Furthermore, forced miR-106b mRNA (Figure 3C) and protein (Figure 3D) level in M214R cells reduced Zbtb7a expression, while miR-106b suppression increased Zbtb7a expression. To confirm the above findings, we analyzed the correlation between miR-106b and Zbtb7a in clinical CCA samples. The expression of miR-106b was found to be inversely correlated with Zbtb7a in clinical CCA samples (Figure 3E). The patient characteristics were summarized as described in Table 1AQ 1. Taken together, these results suggested that Zbtb7a was a direct target of miR-106b in CCA cells. 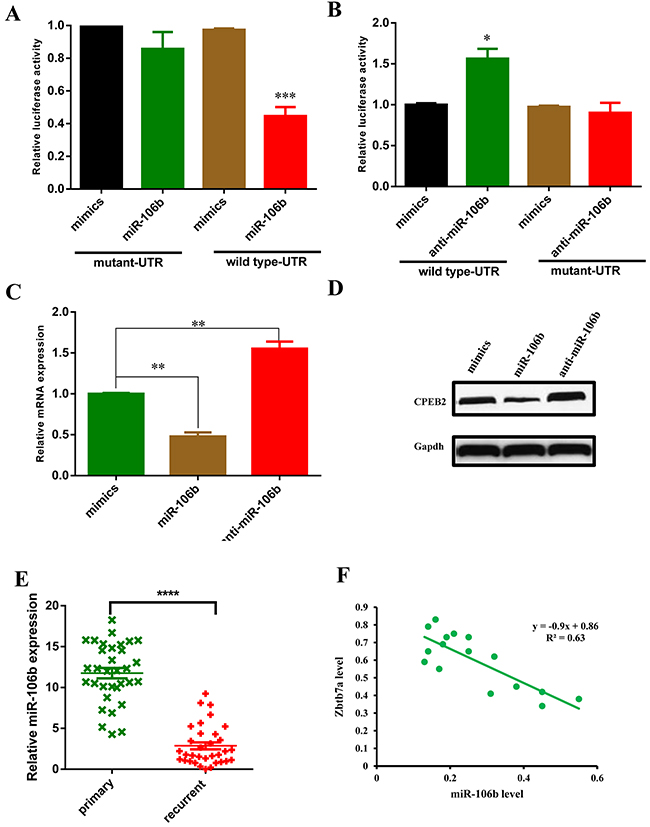 The clinical characteristics were analyzed by using chi-square test. 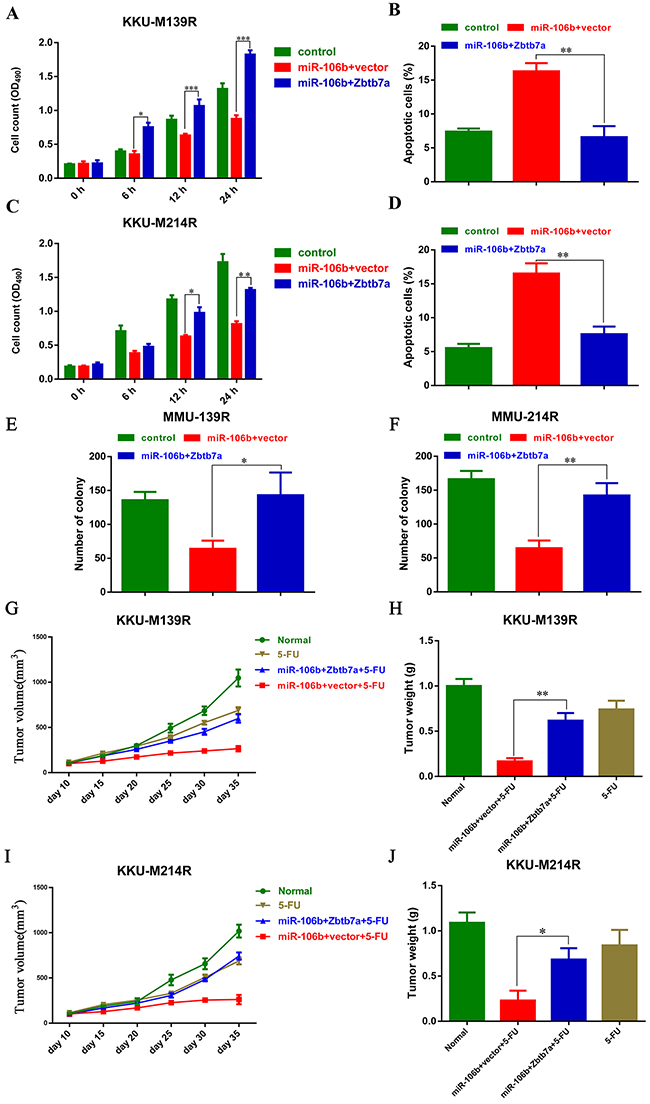 Cholangiocarcinoma (CCA) is one of the most common primary hepatobiliary cancer [12]. Though a majority of patients are benefit from surgical resection, the curative therapy for CCA is still unavailable [2]. In addition, most CCA patients are unable to surgical resection at the time of diagnosis [13]. On the other hand, a majority of CCA patients feel desperate due to chemo-resistance and recurrence [14]. Multidrug resistance (MDR) is a major reason to recurrence. Therefore, to clarify the mechanism how CCA cells defense the 5-FU cytotoxicity is urgently needed. In this study, we identified several aberrantly expressed microRNAs in 5-FU resistant CCA. Our results revealed that miR-106b was significantly downregulated in 5-FU resistant CCA cell lines and 5-FU resistant clinical tumor samples. Thus, decreased expression of microRNA-106b might be used as a prognostic molecular marker.

MiR-106b is known to promote cancer cell proliferation and survival in gastric cancer and hepatocellular carcinoma [15–17]. MiR-106b has been reported to regulate chemo-resistance by suppressing the expression of EP300 [18]. It also regulates colorectal cancer cell resistant to radiotherapies by PTEN/PI3K/AKT signaling [18]. The miR-106b~25 cluster also promotes bypass of doxorubicin-induced senescence and increase in motility and invasion by targeting the E-cadherin transcriptional activator EP300 [19]. Koster R has reported that Oct4/miR-106b/p21 axis offered new strategies for the treatment of chemoresistant testicular and other types of cancer [20]. In this paper, our results showed that miR-106b significantly reduced in 5-FU resistant cells and 5-FU resistant tumors and modulated the progression and tumorigenesis of CCA via suppressing Zbtb7a expression. However, whether other members of miR-106b-25 cluster also contributes the development of drug resistance are not clear.

Recently, Zbtb7a was characterized as an oncogene in many types of cancers, which represses tumor suppressor ARF gene transcription. Zbtb7a expression in several type of cancers is remarkably higher than its in normal tissues [21–24]. In this study, we find that Zbtb7a is the direct target of miR-106b in CCA cells. Furthermore, forced Zbtb7a expression restored miR-106b-induced cell sensitive to 5-FU. Moreover, Zbtb7a overexpression also reduced the 5-FU sensitivity in CCA xenograft tumors. These results suggested that Zbtb7a was the direct and functional target of miR-106b in CCA cells.

In summary, this study identified a novel microRNA, miR-106b, which acted as a suppressor of chemoresistance in CCAs. Our results also suggested that Zbtb7a was the direct and functional target of miR-106b to modulate the 5-FU resistance in CCA cells. The miR-106b/Zbtb7a axis could affect chemotherapy sensitivity of CCA and miR-106b also provided a new target for CCA treatment.

The primary and recurrent samples were obtained at the First Affiliated Hospital of Zhengzhou University from 2011 to 2016. Tissues were flash frozen immediately after surgery. These samples were collected at the time of diagnosis. The study was approved by the Research Ethics Committee of Zhengzhou University, and written informed consent was obtained from all participants.

KKU-M214P/R cells and KKU-M139P/R cells were cultured in RPMI 1640 culture medium supplemented with 10% fetal bovine serum, 2 mM L-glutamine, 100 mg/mL streptomycin and 100 U/mL penicillin in an incubator with a humidified atmosphere and 5% CO2 at 37°C. Transfection was performed using Lipofectamine 2000 reagent (Invitrogen, Carlsbad, CA, USA) according to the manufacturer’s instructions as previously described. The miR-16b mimics, miR-16b antagonist and their scramble controls were synthesized by Sangon (Shanghai, China).

Table 2: The sequences of primers used in this study

CCA cells were seeded in 96-well plates (4×103 cells per well) and at 37°C in an incubator containing 5% CO2. Cells were treated with 40 μM 5-FU, 40 μM 5-FU plus miR-106b mimics (Genepharma, Suzhou, China). Cell viability was tested by using 3-(4,5-Dimethyl-2-thiazolyl)-2,5-diphenyl-2H-tetrazolium bromide (MTT, Sigma) assay at 0 h, 12 h, 24 h after treatment. Briefly, cells were incubated with MTT at a final concentration of 0.5 mg/mL for 4 h. The supernatant was discarded, and the precipitated formazan was dissolved in dimethyl sulfoxide. Absorbance was measured at 490 nm with micro-plate reader (Molecular Devices, i3).

1.0*103 cells, which were transduced with miR-106b or control mimics were seeded into 6-well plates (in triplicates) in 2 ml of complete growth medium. The medium of each well was changed every three days. Two to three weeks later, cells were stained by 0.1% crystal violet (Sigma-Aldrich, St. Louis, MO, USA) in methanol for 10 min. The colonies more than 50μm were counted directly on the plate. Statistical significance was calculated from at least three independent experiments.

Six to eight-week-old BALB/c (nu/nu) mice were purchased from Shanghai SLAC Laboratory Animal Co. All mice were maintained in a barrier facility at Animal Center of Chongqing Medical University. 2.0*106 stably expressing miR-106b or scramble control cells were implanted subcutaneously (s.c.) into the right flank of mice. The tumor bearing mice were subject to 30 mpk 5-FU (i.p.). Tumor volume was measured every 5 days when the tumor volume reaching 100 mm3. All groups of mice were sacrificed and tumors were weighted at the endpoint of this experiments.

This work was supported by the National High Tech Research and Development Program (Grant number: 2015AA020301).

The authors declare that there is no conflict of interests.