The aim of this study was to investigate the mechanism of cadmium-induced apoptosis in chicken spleens and the antagonistic effects of selenium. We duplicated the selenium-cadmium interaction model and examined the expression of apoptosis-, immune-, mitochondrial dynamics- and energy metabolism-related genes. The results demonstrated that after treatment with cadmium, the frequency of apoptosis was significantly increased, and the morphological characteristics of apoptosis were observed. The expression of pro-apoptotic genes was increased, and that of anti-apoptotic genes was decreased. The mRNA levels of tumor necrosis factor-α and interlenkin-1β were observably increased, but the interlenkin-2 and interferon-γ levels were markedly decreased. Furthermore, the mRNA and protein levels of dynamin-related protein 1 and mitochondrial fission factor were significantly enhanced, whereas mitofusin 1, mitofusin 2, and optic atrophy 1 were markedly decreased. The expression of hexokinase 1, hexokinase 2, aconitase 2, lactate dehydrogenase A, lactate dehydrogenase B, succinatedehydrogenase B, pyruvate kinase and phosphofructokinase were also reduced. Selenium supplements remarkably attenuated cadmium-induced effects (p < 0.05). Based on the above results, conclude that the cadmium treatment promoted a mitochondrial dynamic imbalance and reduced energy metabolism, leading to apoptosis and immune dysfunction in chicken spleens, and selenium had an antagonistic effect on Cd-induced apoptosis.

Cadmium (Cd) is a widespread heavy metal pollutant, which can be discharged into the environment during industrial production, including the production of batteries, metal plating, pigments and plastics [1]. Heavy metals may be ingested by animals via respiration or gastrointestinal absorption, resulting in the possible risk of harm to humans through the food web [2, 3]. Cd accumulates in various tissues and cells and produces toxic effects, such as immune dysfunction and apoptosis. In caprine spleens, the combination of Cd and molybdenum induced noteworthy damage by promoting cell apoptosis [4]. In the immune organs of chicken, arsenic trioxide exposure increased the levels of heat shock protein, disrupting immune function [5]. Cd was found to induce oxidative stress, endoplasmic reticulum stress, and NO overproduction, which are factors that are believed to be involved in apoptosis [6, 7]. Several studies have reported that Cd induces apoptosis through a mitochondria-dependent pathway. In rat proximal tubular cells, Cd induced apoptosis by the breakdown of mitochondrial ΔΨ and overproduction of reactive oxygen species (ROS) [8, 9]. The breakdown of mitochondrial ΔΨ and the increased mitochondrial membrane permeability resulted in the release of cytochrome c (Cyt-c) from the mitochondria into the cytosol [10]. Furthermore, Cd increased expression of pro-apoptosis genes (such as Bax and Bak) and decreased expression of anti-apoptosis genes (such as Bcl-2), which may induce the release of Cyt-c [11]. In pancreatic β-cells, Cd increased the expression of p53, leading to the release of Cyt-c and apoptosis [12]. Cyt-c activated the caspase protein family (such as caspase 3 and caspase 9) and led to apoptosis [13]. Recent studies have suggested that Cd induces mitochondrial fragmentation by increasing dynamin-related protein 1 (Drp1) expression [14, 15]. Manganese (Mn) also induced deregulation of expression levels of mitochondria-shaping proteins and exacerbated fragmentation [16]. Mitochondrial fragmentation, in turn, facilitated apoptosis [17]. The Drp1 and mitochondrial fission factor (Mff) mediated mitochondrial membrane fission. Conversely, mitofusin 1 (Mfn1), mitofusin 2 (Mfn2) and optic atrophy 1 (Opa1) mediated mitochondrial membrane fusion. Additionally, several reports revealed that heavy metal toxicity led to energy metabolism dysfunction, resulting in apoptosis. In skeletal muscles of mice, Cd inhibited the expression of hexokinase (HK) and phosphofructokinase (PFK), disrupting glycolysis and decreasing ATP generation [18]. The reduced glucose metabolism and energy production impaired the normal structure and function of cardiomyocytes, leading to apoptosis [19].

In summary, several previous studies have demonstrated that Cd induces apoptosis in various tissues and cells, and Se can relieve Cd toxicity. Nevertheless, the mechanisms underlying Cd-induced apoptosis by disrupting mitochondrial dynamics and energy metabolism in chicken spleens and the antagonistic effects of Se are still unclear. The aim of this study was to investigate these mechanisms. We established the Se-Cd interaction model and examined the ultrastructural changes, frequency of apoptosis and expression of apoptosis-, immune-, mitochondrial dynamic- and energy metabolism-related genes in chicken spleens. With this study, we hope to provide a new perspective on the interaction of Se and Cd-induced apoptosis in chicken spleens. 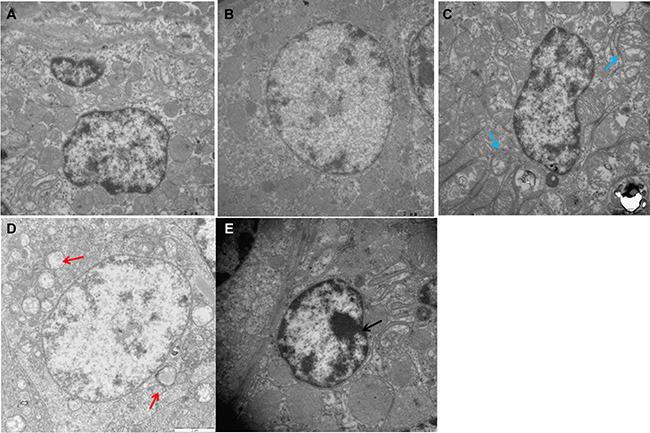 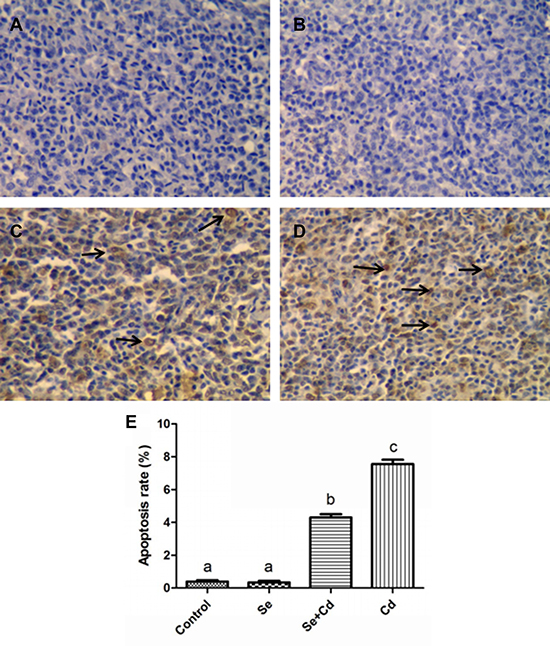 The relative expression of apoptosis-related genes in chicken spleens

The expression of apoptosis-related genes in chicken spleens is shown in Figure 3. Se treatment alone had no influence on apoptosis-related genes compared to those in the control group (p > 0.05). In the Cd-treated group, mRNA and protein levels of Bax, Bak, p53, Cyt-c, caspase 3 and caspase 9 were markedly increased and those of Bcl-2 were significantly decreased compared to the levels in the control group (p < 0.05). In the Se+Cd-treated group, we found that Se observably attenuated the changes induced by Cd, but expression levels did not reach the control group levels (p < 0.05). 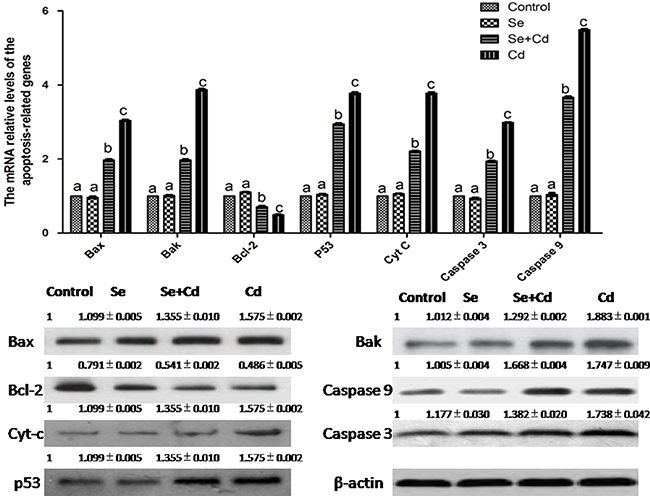 The relative expression of immune-related genes in chicken spleens

The expression of immune-related genes in chicken spleens is shown in Figure 4. There were no significant differences between the expression levels in the control group and the Se-treated group (p > 0.05). The relative mRNA levels of interlenkin-1β (IL-1β) and tumor necrosis factor-α (TNF-α) were markedly higher, and interlenkin-2 (IL-2), interferon-γ (IFN-γ) levels were remarkably lower in the Cd-treated group than those in the control group (p < 0.05). Se and Cd co-treatment significantly attenuated the changes induced by Cd, but did not bring the gene expression to the control group level (p < 0.05). 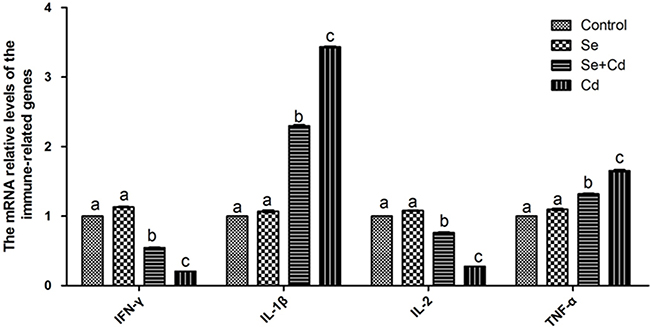 Figure 4: The relative mRNA levels of immune-related genes in chicken spleens. Effects of Se, Cd and Se-Cd treatment on the relative mRNA and protein levels of immune-related genes were examined in chicken spleens. Chicken β-actin was used as an internal reference. Each value represents the mean ± SD (n = 10). The bars with different small letters represent statistically significant differences between the groups (p < 0.05); the bars with a common letter are not significantly different (p > 0.05).

The relative expression of mitochondrial dynamics-related genes in chicken spleens 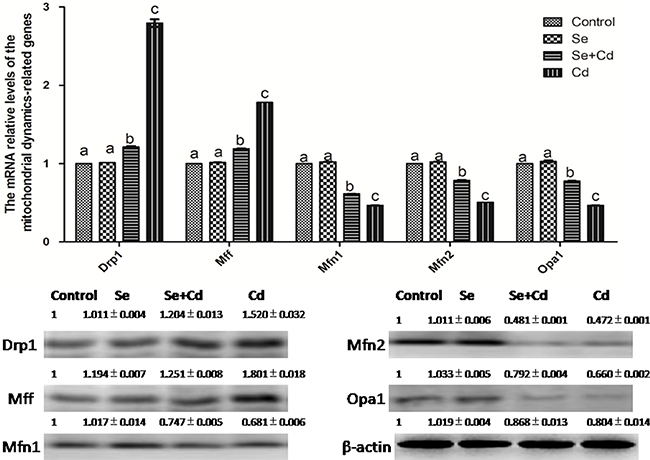 The relative expression of energy metabolism-related genes in chicken spleens 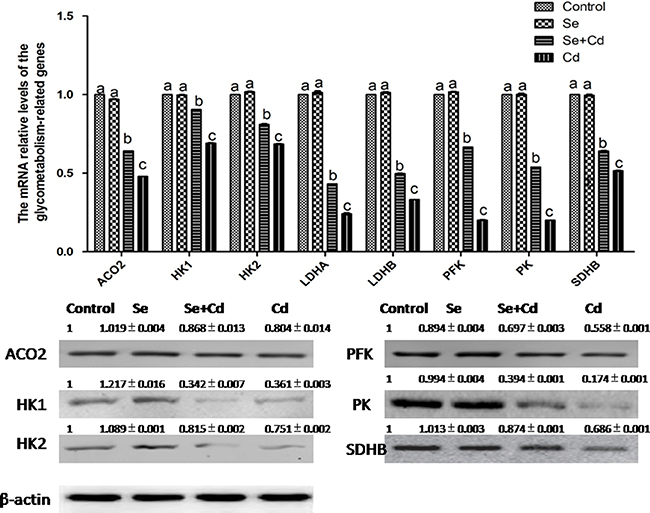 Apoptosis plays an important role in stabilizing the homeostatic system in organisms [34]. Because the spleen is a primary immune organ, excessive apoptosis in splenic cells may cause structural and functional damage to the spleen, leading to immune dysfunction. Many researchers have observed that Cd induces apoptosis in animals. For instance, in rats, Cd treatment increased the number of apoptotic cells in renal cortical tissues and brain [35, 36]. In chicken, Cd induced apoptosis in the liver, leading to liver tissue damage [37]. In the present study, our results demonstrated that splenic cells with Cd treatment displayed typical morphological changes associated with apoptosis, and the frequency of apoptosis was markedly increased. However, Se was reported to have antagonistic effects on Cd toxicity in the immune organs of chicken [38]. Consistent with these studies, our results suggested that Se may significantly recover the normal structure of splenic cells, reduce the frequency of Cd-induced apoptotic cells, restore spleen function and enhance immune function.

Several studies have demonstrated that Cd has an immunosuppressive effect. IL-1β, IL-2, TNF-α and IFN-γ are important indexes of immune function [39–41]. Pb exposure increased the level of TNF-α [42, 43]. Excessive Mn inhibited the expression of IL-2, causing immunosuppression in chicken splenic lymphocytes [43]. Our results demonstrated that the mRNA and protein levels of TNF-α and IL-1β were markedly increased and those of IL-2, IFN-γ were significantly decreased following Cd treatment. These results support findings from previous studies and confirm that Cd induces immune dysfunction in chicken spleen. In addition, reports demonstrated that Pb toxicity was remarkably alleviated by Se treatment in the chicken liver [44]. Consistent with these reports, our results also demonstrated that Se supplements could rescue the abnormal expression of immune-related genes induced by Cd, thereby improving immune function.

In conclusion, we demonstrated that Cd induced excessive mitochondrial fragmentation, mitochondrial structure damage and reduced energy metabolism, leading to apoptosis and immune dysfunction in chicken spleens, and Se inhibited apoptosis by partially alleviating (Figure 7) these effects induced by Cd. Our results enrich the understanding of the mechanism of apoptosis induced by Se and Cd interaction in chicken spleens. 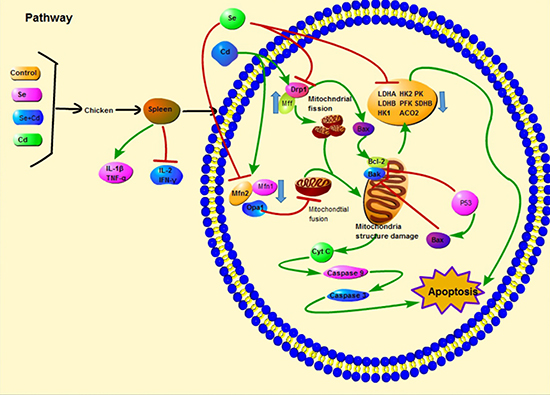 Figure 7: Scheme shows the pathway of Se and Cd interaction and the Cd-induced apoptosis in chicken spleens. Scheme shows the mechanism of Cd-induced apoptosis by disturbing mitochondrial dynamics and energy metabolism in chicken spleens and the antagonistic effects of Se. The green line displays the promotion and the red line displays the inhibition.

For electron microscopy, spleen tissue specimens (approximately 1 mm3) were rapidly fixed with 2.5 % glutaraldehyde in 0.1 M sodium phosphate buffer (pH 7.2) for 3 h at 4°C, washed in the same buffer for 1 h at 4°C, and post-fixed with 1% osmium tetroxide in sodium phosphate buffer for 1 h at 4°C. The tissues were then dehydrated in a graded series of ethanol, starting at 50 % for 10 min at each step, followed by two changes in propylene oxide. The tissue specimens were embedded in Araldite. Ultrathin sections were stained with Mg-uranyl acetate and lead citrate for transmission electron microscope evaluation (GEM-1200ES, Japan).

TUNEL detection of apoptotic cells was performed in formalin-fixed, paraffin-embedded spleen tissue sections according to the manufacturer’s protocol (Roche, USA). This procedure distinguishes apoptotic cells from those undergoing necrosis because damaged DNA in apoptotic cells leads to a different distribution of staining and nuclear morphology. Paraffin wax-embedded tissue sections were treated with proteinase K, and the endogenous peroxidase activity was blocked with hydrogen peroxide. The sections were incubated at 37°C with the terminal TdT/nucleotide mixture for 1 h. Next, the reaction was stopped and the slides were rinsed with phosphate-buffered saline (PBS). Nuclear labeling was developed with horseradish peroxidase and diaminobenzidine. Hematoxylin was used for counterstaining.

Total RNA was isolated from tissue samples using the TRIzol reagent according to the manufacturer’s instructions (Invitrogen, Carlsbad, USA). The RNA concentrations were determined using the GeneQuant 1300. The procedure for reverse transcription was performed according to the manufacturer’s instructions (Roche, Basel, Switzerland). Synthesized cDNA was stored at −20°C for PCR. Oligo 6.0 software was used to design specific primers based on known sequences (Table 1). Chicken β-actin was used as a housekeeping gene and an internal reference. Primers were synthesized by Invitrogen Biotechnology Co. Ltd. in Shanghai, China.

QRT-PCR was performed on a LightCycler®480 Detection System (Roche, Basel, Switzerland) using Fast Universal SYBR Green Master (Roche, Basel, Switzerland). The program was run as follows: 1 cycle at 95°C for 30 s followed by 40 cycles at 95°C for 5 s and at 60°C for 34 s. Dissociation curves for each PCR reaction were analyzed by using the Dissociation Curve 1.0 software (Applied Biosystems) to detect and eliminate possible primer-dimers and non-specific amplifications. The relative abundance of mRNA was calculated according to the method of Pfaffl [60].

Statistical analyses of all data were performed using SPSS for Windows (version 21.0; SPSS Inc., Chicago, IL, USA). One-way analysis of variance followed by the Tukey’s honest significant difference test was used to analyze the descriptive statistics (mean values, standard deviation). The results were considered to be significant when p < 0.05.

We are thankful for the support of Heilongjiang Key Laboratory for Laboratory Animals and Comparative Medicine.

This study received support from the National Natural Science Foundation of China (Grant No. 31472161).