Cardiovascular disease (CVD), including myocardial infarction (MI), is the number one cause of death [1]. Suspected MI is a common reason for emergency hospital attendance and admission [2]. It has been suggested that biomarkers of inflammation, such as increased blood homocysteine [3], C-reactive protein [3], and cytokine levels [4], may be new risk factors for CVD. However, these biomarkers are poorly specific and susceptible. Inherited gene variants are less influenced by environment factors, and may be a better marker of individual MI susceptibility [5].

Recently, several studies addressed the association between ICAM-1 gene rs5498 polymorphism and MI risk. However, they yielded contradictory and inconclusive findings [11–22]. Thus, we undertook this meta-analysis to evaluate whether ICAM-1 rs5498 polymorphism is associated with MI risk.

261 articles were retrieved after initial search, and 45 full articles were identified for possible inclusion. 33 articles were excluded due to the following reasons: 9 investigated other polymorphisms; 3 did not provide detailed genotyping data; 14 studied coronary artery disease (CAD); 3 were reviews; 3 were meta-analyses and 1 was not case-control study. In total, 12 eligible studies involving 1,696 cases and 3,039 controls were included. Selection for eligible studies in this meta-analysis was presented in Figure 1. The detailed characteristics of all the selected studies were summarized in Table 1. 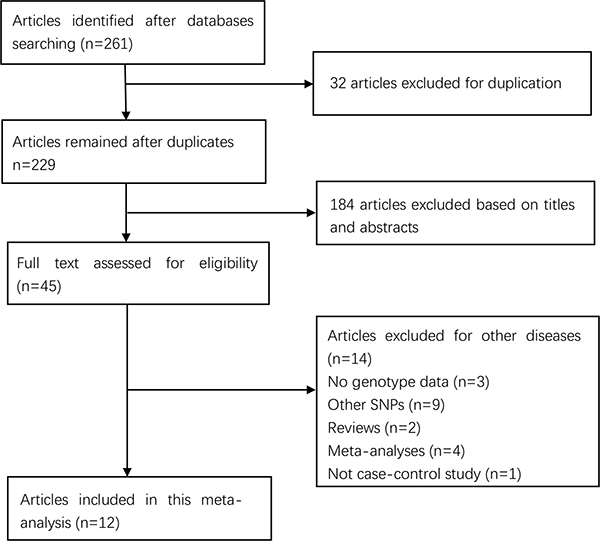 *The Combined number of AG and GG genotypes; N/A: not available. 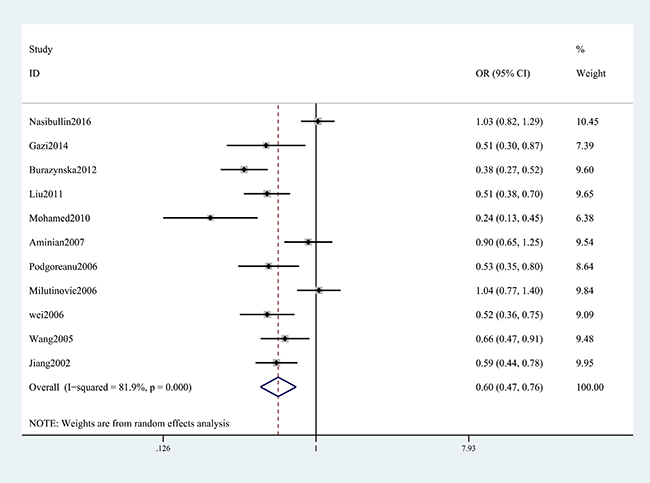 Figure 2: ORs and 95 % CIs from individual studies and pooled data for the association between ICAM-1 gene rs5948 polymorphism and MI in all subjects (G vs. A) 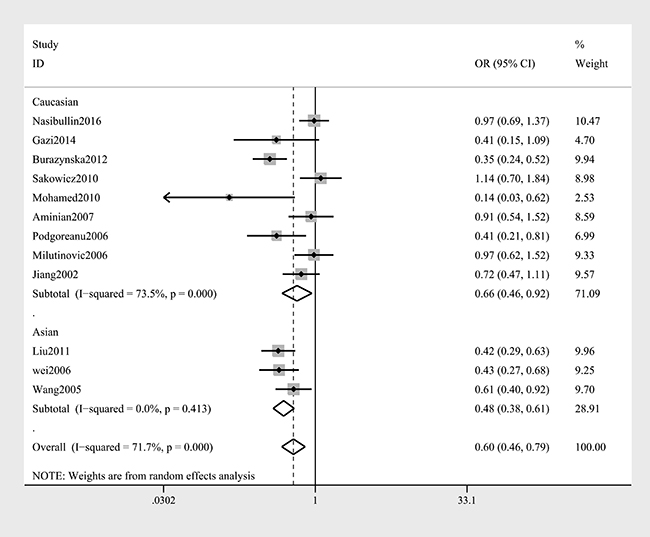 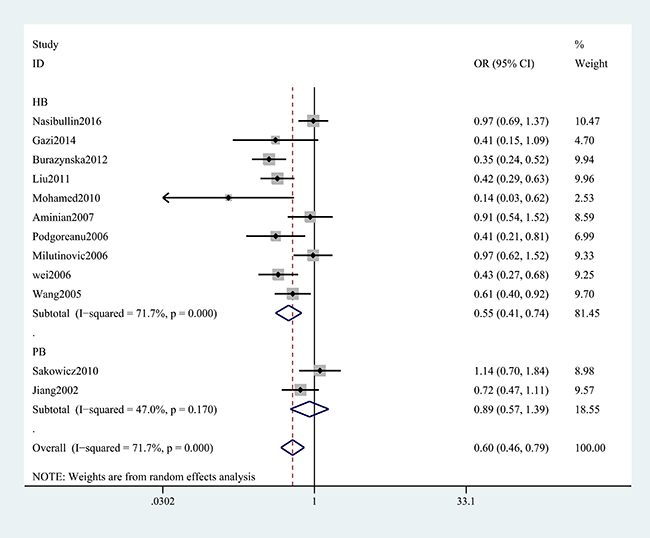 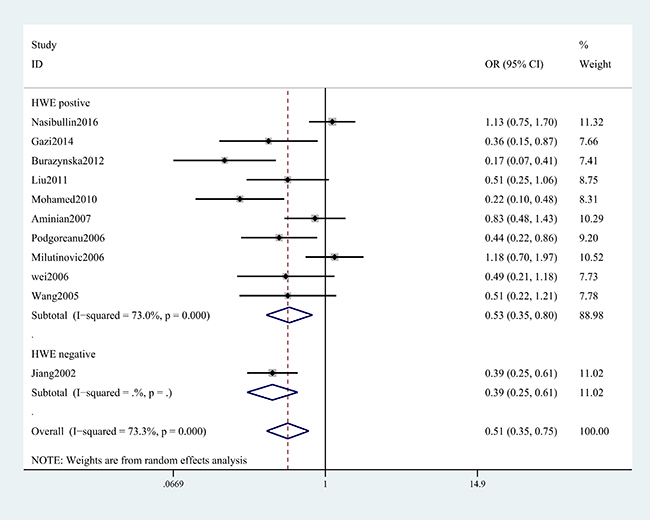 Sensitivity analysis was conducted to evaluate the effect of each study on the pooled ORs by omitting each study in turn. The pooled ORs were not affected by excluding any study (AG+GG vs. AA, Figure 6). Meanwhile, the potential publication bias (G vs. A, Pbegg = 0.675 and Pegger = 0.548; AG+GG vs. AA, Pbegg = 0.815 and Pegger = 0.593) was analyzed by performing both of the Begg’s and Egger’s tests (AG vs. AA, Figure 7). We found no obvious publication bias in this meta-analysis. 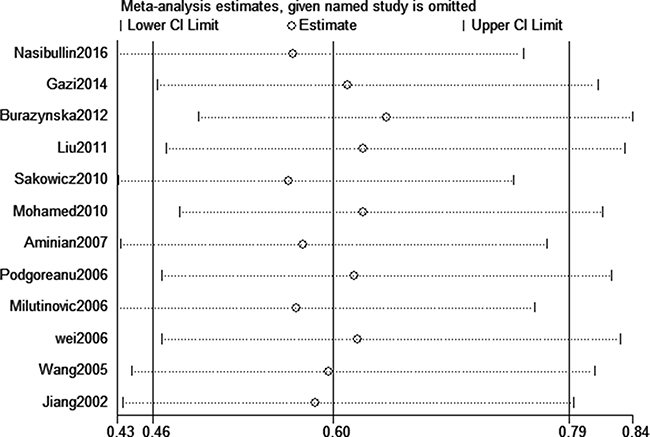 Figure 6: Sensitivity analysis for assessing the stability of the data of this meta-analysis (AG+GG vs. AA). 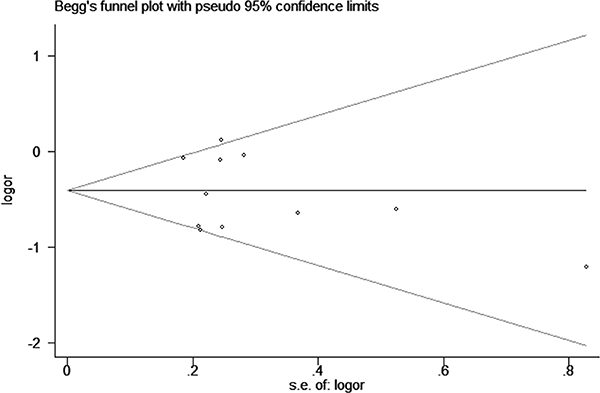 ICAM-1 is a transmembrane glycoprotein in the immunoglobulin superfamily, which plays an important role in cell adhesion and signal transduction [23]. Ley et al. found that ICAM-1 is responsible for formation, growth and rupture of atheroma [24]. A circulating or soluble form of ICAM-1 with elevated levels were also observed in patients with atherosclerosis and heart failure [25]. A host of studies attached importance to assess the possibility that ICAM-1 gene polymorphism may become a new biomarker for MI [11–22]. Eight studies found that ICAM-1 rs5498 polymorphism was associated with a significantly increased risk of MI [12, 14, 16–18, 20–22]. However, the remaining studies failed to replicate this association [11, 13, 15, 19]. Therefore, we thought it was necessary to perform a meta-analysis to yield a more accurate conclusion on the association between ICAM-1 gene rs5498 polymorphism and MI risk.

The potential limitations should be taken into consideration. First, MI is a multifactorial disease and may be affected by several confounding factors, such as History of MI, gender, and age. Thus, the function of a single SNP is limited. Second, sample size was relatively small and high between-study heterogeneity was observed in several genetic models. Third, only Caucasian and Asian populations were included in this meta-analysis and the results may be not applied to other ethnic groups. Fourth, the sample size of this meta-analysis was not very large. Fifth, the subgroup analysis might have insufficient statistical power to assess the real association. Sixth, we performed this meta-analysis with crude ORs since studies included in this meta-analysis lacked sufficient data for adjustment for confounding factors, which might affect the stability of our results.

In summary, our meta-analysis confirms that ICAM-1 gene rs5498 polymorphism is a protective factor for MI. Stratified analysis of ethnicity indicates that ICAM-1 rs5498 polymorphism is associated with the decreased risk of MI among Caucasians and Asians. Further epidemiological studies with larger simple sizes from different geographic regions are needed to confirm our findings.

Eligible studies met the following inclusion criteria: (1) evaluating the relationship between ICAM-1 rs5498 polymorphism and risk of MI; (2) sufficient data for calculating the pooled odds ratio (ORs) with 95% confidence interval (CI); (3) case-control studies; (4) when studies had overlapping populations, the ones with the most complete data were included.

Two authors reviewed and extracted data independently in accordance with the inclusion criteria. From each study, the following information was extracted: first author’s surname, publication year, country of origin, ethnicity, and numbers of cases and controls. Authors were contacted to provide supplemental data, if data were not available in the eligible studies. When studies included subjects of more than one ethnicity, genotype data were extracted separately.

Two authors independently assessed the quality of the selected studies using the Newcastle-Ottawa Scales (NOS) [31]. Total NOS scores ranged from 0 to 9. A score ranging 5 to 9 stars is considered to be a generally high methodological quality while a score ranging 0 to 4 is regarded as a relatively poor quality. The discrepancies were resolved by discussion or consulting with a third author.

All statistical analyses were performed using the Stata 11.0 software (StataCorp, College Station, TX, USA). Pooled ORs with corresponding 95% CIs were calculated to evaluate the strength of association between ICAM-1 rs5498 polymorphism and risk of MI. Stratification analyses were carried out by ethnicity, SOC and HWE. P < 0.05 was considered statistically significant. Taking possible between-study heterogeneity into consideration, we considered the presence of significant heterogeneity at the 10% level of significance and values of I2 exceeding 50% as an indicator of significant heterogeneity. When no heterogeneity was found with P > 0.10 or I2 < 50%, a fixed-effect model was used. Otherwise, a random-effects model was applied [32]. Sensitivity analysis was conducted to determine the effect on the test of heterogeneity and evaluate the stability of the results by omitting each study in turn. Genotype distributions in the controls were tested for confirmation of Hardy-Weinberg equilibrium using the χ2 test. Publication bias was evaluated by visual inspection of symmetry of Begg’s funnel plot and assessment of Egger’s test [33]; P < 0.05 was regarded as representative of statistical significance.

15. Milutinović A, Petrovic D. The K469E polymorphism of the intracellular adhesion molecule 1 (ICAM-1) gene is not associated with myocardial infarction in Caucasians with type 2 diabetes. Folia Biol (Praha). 2006; 52:79–80.

31. Stang A. Critical evaluation of the Newcastle-Ottawa scale for the assessment of the quality of nonrandomized studies in meta-analyses. Eur J Epidemiol. 2010; 25:603–05.