Gallic acid (GA) is a class of polyphenols present in tea and grapes and is widely available in nature [10]. Its compounds are used as antioxidants in several food and pharmaceutical industries, because they exhibit certain properties, such as anti-inflammation, antitumor, antioxidation, and bacteria inhibition [11]. In our study, GA has been observed to have an anti-inflammatory effect on nucleus pulposus cells. Although GA cannot directly reduce the expression of ADAMTS4 mRNA in the nucleus pulposus cells, it can inhibit the TNF-α-related phosphorylation of p65 and increase its deacetylation. Thus, it can inhibit the TNF-α-induced activation of the p65 signaling pathway and reduce ADAMTS4 expression.

Figure 1: (A) Glu-1, Shh, and Hif-1α immunofluorescent staining. Glu-1 fluorescence-labeled secondary antibody was Alexa Fluor 594, whereas Shh and Hif-1α fluorescence-labeled secondary antibody was Alexa Fluor 488. (B) CCK8 was used to analyze the toxicity of different GA concentrations on human nucleus pulposus cells cultured for 24, 48, and 72 h. (C) ELISA was used to analyze the effect of TNF-α and GA on supernatant ADAMTS4 secretion in human nucleus pulposus cells at 24 and 48 h. 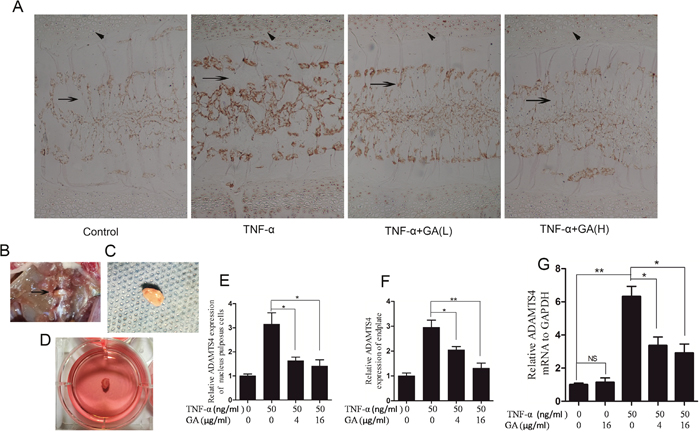 Inhibition of GA on the phosphorylation of p65

In the nucleus pulposus cells, GA can antagonize TNF-α-induced ADAMTS4 secretion, in which TNF-α activates the NF-κB signaling pathway. Thus, we speculated that GA can inhibit the activation of the NF-κB signaling pathway. The p65 phosphorylation reached its peak level in the nucleus pulposus cells 15 min after TNF-α addition (Figure 4A, 4B). GA was added at four time points when the phosphorylation level of p65 was the highest (15 min, 30 min, 60 min, and 2 h). The phosphorylation level of p65 was inhibited in all time points (Figure 4C, 4D). 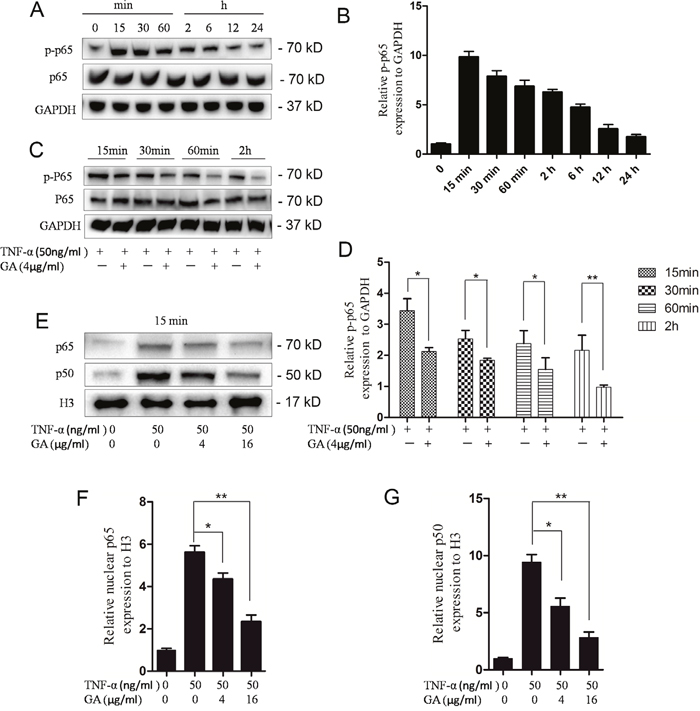 Inhibition of GA on p65-p50 import into the nucleus

The import of the dimer p65–p50 into the nucleus was observed to verify the effect of inhibited p65 phosphorylation on the downstream pathways. Then, the p65 and p50 levels in the nucleus were examined. The results showed that the import was inhibited 15 min after GA and TNF-α additions (Figure 4E, 4F, 4G).

GA suppresses TNF-α-induced p65 phosphorylation and the transfer of p65–p50 into the nucleus. Thus, we speculated its impact on p65 acetylation. Compared with TNF-α group, the GA group had a decreased p65 acetylation level after 15 min, suggesting that GA suppressed p65 acetylation (Figure 5A, 5B). The acetylation level of P65 can be decreased by reducing HAT activity or increasing HDAC activity. Thus, we examined the influence of GA on HAT and HDAC activities. The results indicated that GA cannot activate HDAC (Figure 5E). We then tested several known HATs and found that HAT activity showed a decreasing trend at increasing GA concentration. Therefore, the deacetylation of p65 probably increased, because GA inhibited HAT activity (Figure 5C, 5D). 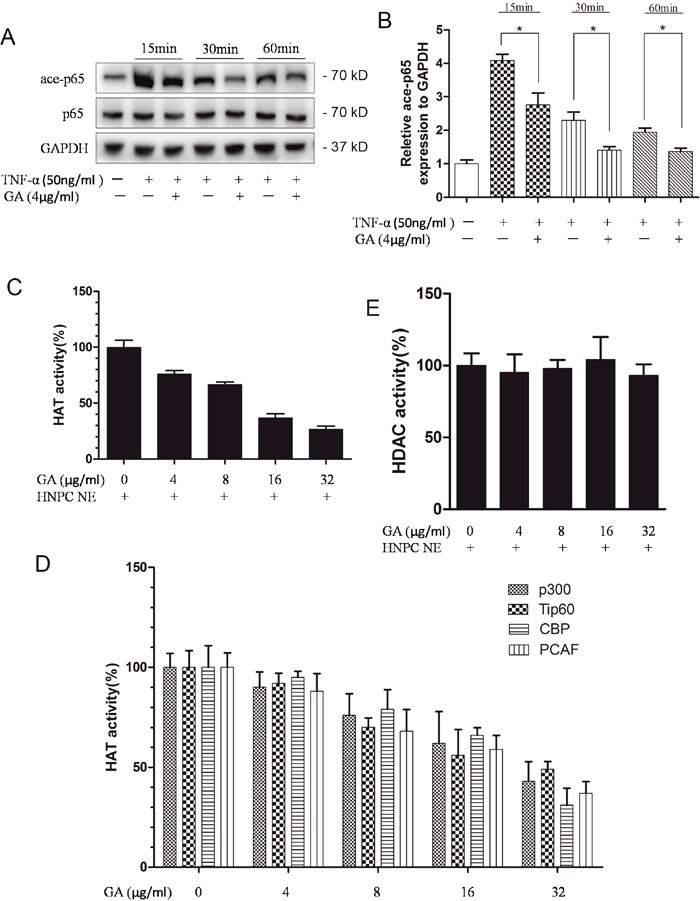 Figure 5: GA suppresses p65 acetylation. (A) Western blotting of acetylated p65 at four time points (15 min, 30 min, 60 min, and 2 h) after human nucleus pulposus cells were treated with TNF-α and GA. (B) Comparison between the acetylated p65 Western blot gray values of the NF-α and GA treatments. (C) Effect of GA on HAT activity. (D) Effects of different GA concentrations on the activities of the four HATs (p300, Tip60, CBP, and PCAF). (E) Effect of GA on HDAC activity.

GA possesses cytotoxicity at high concentrations while TNF-α can induce cell apoptosis. Our results showed that GA antagonized the TNF-α-induced activation of NF-κB signaling pathway. Thus, the effect of GA on the apoptosis of nucleus pulposus cells were observed. The results indicated that 4 and 16 μg/ml GA antagonized TNF-α-induced apoptosis of nucleus pulposus cells when the TNF-α level was 150 ng/ml (Figure 6). 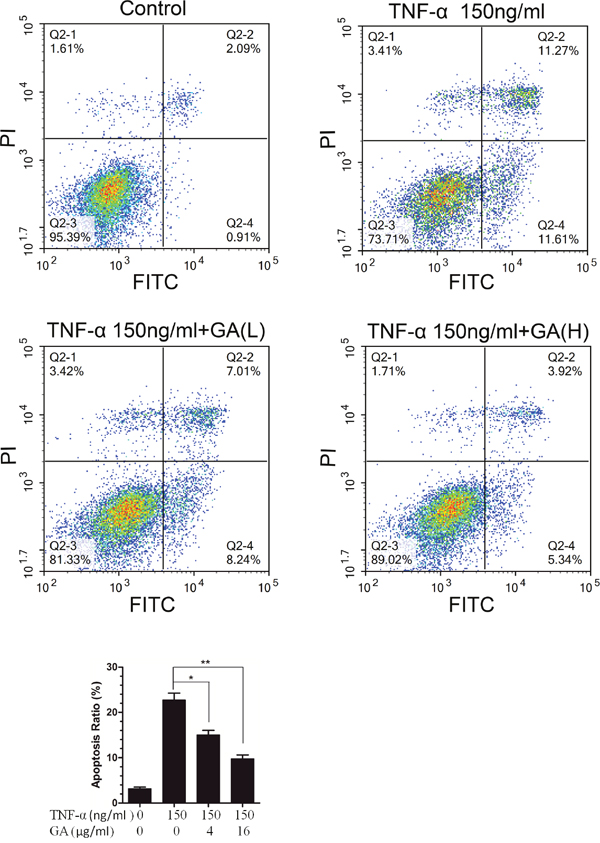 Figure 6: GA resists TNF-α-induced apoptosis in hNPCs. (A) The hNPCs (1.0 × 105 cells/mL) were stimulated with or without GA(4 and 16 μg/ml) or TNF-α for 48 h in a 6-cm culture plate. Cells were collected and stained with FITC and PI and then examined by flow cytometry. (B) FACS histogram analuysis.

GA can be extracted from green tea polyphenols and has anti-inflammatory bioactivity. Therefore, the anti-inflammatory activity of GA in the degeneration of nucleus pulposus cells was investigated. In our study, the autocrine level of ADAMTS4 was decreased after GA was added in TNF-α-induced rat intervertebral disc and hNPCs culture medium. During intervertebral disc degeneration, the inflammatory factors activated the NF-κB signaling pathway, leading to the secretion of various types of matrix metalloproteinases [13, 14]. The ADAMTS4 in these metalloproteinase degraded the proteoglycans that were particularly critical for maintaining the physiological function of intervertebral discs [8, 9, 15]. Therefore, the inhibitory action of GA on ADAMTS4 autocrine in the nucleus pulposus cells must be further investigated.

NF-κB signaling pathway plays an important role in immune regulation, inflammation, stress reaction, embryonic development, growth control, and cell apoptosis. During intervertebral disc degeneration, inflammatory factors such as IL-1β and TNF-α stimulate the nucleus pulposus cells to activate IκB kinase, thereby degrading IκB protein after ubiquitination and phosphorylation and exposing the NF-κB dimers, particularly dimer p65–p50. Then, p65 was phosphorylated and p65-p50 was imported into the nucleus to target the corresponding sequence of DNA according to the nuclear localization site of p50 [16]. We found that GA could inhibit p65 phosphorylation and suppress the import of p65–p50 into the nucleus which indicated that GA inhibited the activation of NF-κB signaling pathway. Dimer p65–p50 activated the transcription factors after entering the nucleus, and p65 was acetylated by histone acetyltransferase (HATs) in the nucleus at the same time. Acetylated p65 inhibited its ability to bind to IκBα, and led to the continous activiting of NF-κB signaling pathway. However, p65 was deacetylated by the histone deacetylase (HDAC) in the nucleus, strengthening its binding ability to IκBα, and the complex was transported out of the nucleus by the nuclear transport protein (CRMI). These processes are reasonable in organisms, and effectively prevent the excessive activation of NF-κB signal [17–19]. We also examined the effect of GA on p65 acetylation level, and the results showed that the p65 acetylation level was decreased as a result of GA addition. We speculated that GA can enter into the cell nucleus and subsequently affects p65 acetylation. GA reduced the acetylation level of p65 by inhibiting HAT activity, but it did not affect HDAC. Basing on this result, we determined that GA inhibits increase in acetylation but has no effect on deacetylation. Therefore, p65 acetylation decreased, leading to increased p65 export from the nucleus. This finding also indicated that GA can effectively inhibit the constant activation of NF-kB signaling pathway in nucleus pulposus cells.

In literature, high-dose GA is toxic to organisms [20]. Thus, we established a safe dose of GA for nucleus pulposus cells through CCK8 at the beginning of the experiment and then determined the GA concentration at which nucleus pulposus cells apoptosis occurs. Our aim is not only to determine the inhibitory effect of GA on ADAMTS4 autocrine, in other words, to delay the degradation of proteoglycans in intervertebral discs, but also to explore the possibility of actually applying GA in organisms.

According to the results of this study, a safe dose of GA has a significant inhibitory effect on the ADAMTS4 autocrine of nucleus pulposus cells stimulated by IL-1β and TNF-α and does not promote cytotoxicity and apoptosis. Meanwhile, we determined that GA inhibits the autocrine of ADAMTS4 by restraining the activation of the NF-κB signaling pathway. Several studies have showed that high GA concentrations promote apoptosis, and TNF-α is an important pro-apoptotic factor. However, our research results showed that low GA concentration antagonized TNF-α-induced apoptosis in the nucleus pulposus cells, and GA regulates the NF-κB signaling pathways. Moreover, another interesting phenomenon in this study we found was that the secretion of ADAMTS4 in the endplates on both sides of rat intervertebral disc was also regulated by GA, indicating that GA also affects the cartilage cells. The discoveries actively promoted the study of ADAMTS4 secretion in articular cartilage cells. We believe that these results can provide insights into the regulation of intervertebral disc degeneration and contribute to the development of methods that can antagonize intervertebral disc degeneration.

However, the systemic suppression of NF-κB can damage the defensive response functions of the body to pathogens [21]. Although the target spot of GA is p65, systemic use of GA may potentially cause damages to other organisms except intervertebral disc. Exploring the mechanisms by which GA targets in the intervertebral disc is necessary. In addition, despite being the largest tissue, the intervertebral disc lacks vessels, and thus its blood supply is extremely low, especially in adults. The nutrition of its nucleus cells mainly relies on a small amount of vessels from the bilateral endplates and anulus fibrosus. Thus, the transport of GA into the nucleus pulposus remains challenging.

Taken together, the present study demonstrates that GA suppresses the p65 phosphorylation and acetylation of NF-κB signaling pathway thus inhibiting ADAMTS4 secretion of nucleus pulposus cells (Figure 7). This study adds a novel line of evidence in disc degeneration and may help in understanding disc degeneration therapeutics. 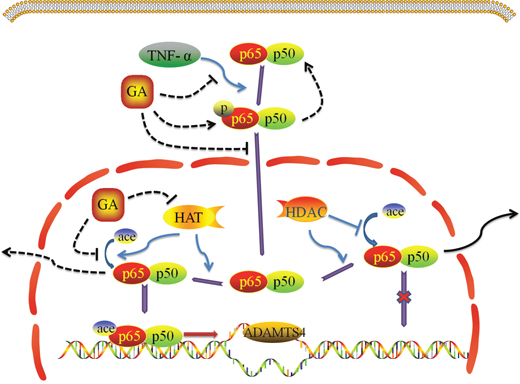 The Sprague–Dawley rats were purchased from the Model Nanjing Animal Research Center of Nanjing University. All the procedures performed in this study complied with the ethical requirements of The First Affiliated Hospital with Nanjing Medical University.

Human nucleus pulposus cells (ScienCell 4800, USA) and cell-specific media (ScienCell 4801, USA) were purchased from ScienCell. The cells were cultured at 37 °C/5% CO2, and then grown to 90% confluence. The cells within the five passages of subculture were then collected for the subsequent experiments. For the TNF-α-treated cells and intervertebral disc, the concentration of the culture medium was 50, 100, or 150 ng/ml. The concentrations for the GA-treated cells and intervertebral disc were 4 or 16 μg/ml, respectively.

The CCK8 ptotocol was performed as described previously [23]. The medium was replaced with complete medium containing different concentrations of GA (0,2,4,8,12,16,24,32, and 40μg/mL). The complete medium was replaced with 100μL of serum-free medium containing 10% CCK8 dye after 1, 2, and 3 days, and cells were cultured for an additional 1h. The optical absorbance at 450 nm for each sample was measured using an absorbance microplate reader (ELx800 Absorbance Microplate Reader, Bio-Tek, USA).

ADAMTS4 release in the hNPCs was determined by enzyme-linked immunosorbent assay (ELISA) using a commercially available ELISA set (R&D Systems Inc., Minneapolis, MN and BD Biosciences, San Diego, CA). ELISA was performed according to the manufacturer's instructions. All samples and standards were measured in duplicate.

For the immunofluorescence assays, hNPCs were cultured on a 24-pore plate. After fixed and incubated with 0.5% Triton X-100 (Sigma, Santa Clara, California, USA), the cells were blocked with goat serum for 1 h before the primary antibody (diluted by1:100; Abcam, Cambridge, UK) was applied for incubation at 4 °C overnight. The secondary antibody (diluted by 1:100; Jackson, West Grove, PA, USA) was applied and the cells were incubated for 1 h in a dark place. Finally, the nuclei were counterstained with DAPI for 15 min. The stained cells were photographed under a fluorescence microscope.

For the ADAMTS4 immunohistochemistry, The paraffin sections were de-waxed, dehydrated, and incubated overnight at 4 °C with anti-ADAMTS4 (diluted by1:100; Abcam, Cambridge, UK). After the primary antibody was removed, the secondary antibody (diluted by 1:100, Thermo, Waltham, Massachusetts, USA) was added; and, the sections after being incubated for 1 h at room temperature. The stained cells were developed with diaminobenzidine, counterstained with hematoxylin.

To determine the mRNA levels of ADAMTS4 and qRT-PCR was performed as described previously [24].

SPSS 19.0 was used for all statistical analysis. The measurements were presented as mean ± SD, and the data were analyzed using the Student t test and One-Way ANOVA test followed by Tukey's multiple comparison tests. All experiments were independently repeated 3 times and differences were statistically significant when P < 0.05.