Most of non-small cell lung cancer (NSCLC) patients are diagnosed at an advanced stage and have lost their chance for surgery. Consequently, NSCLC has the highest cancer mortality rates in both males and females [1]. NSCLC consists of several subtypes, including adenocarcinoma, squamous cell lung cancer, large cell lung cancer, and other rarer types. Although the discoveries of driver-mutation and personalized medications have improved the prognosis of a portion of NSCLC patients [2], platinum-based chemotherapies still serve as the first-line treatments for advanced NSCLC patients who are unsuitable for targeted therapies. In a study of 1139 patients, platinum-based regimens all had similar efficacies, with a response rate of nearly 19% and a median overall survival time of 7.9 months [3]. To improve efficacy and avoid side effects, nedaplatin was synthesized and introduced into clinical trials in 1988. Preliminary results indicated that nedaplatin might be an excellent substitute for cisplatin [4]. Subsequent research demonstrated that nedaplatin-based regimens have favorable efficacy in squamous cell histology. Naito [5] investigated efficacy of a nedaplatin and docetaxel regimen in advanced squamous cell lung carcinoma. The doublet produced an objective response rate of 62% and an overall survival of 16.1 months, which was comparable to the results in earlier studies [6, 7]. But although attention has been paid to the efficacy of nedaplatin and its comparison to cisplatin, few studies have focused on its histological specificity. This systemic review was therefore designed to quantitatively compare the efficacy of a nedaplatin-based regimen between squamous cell lung cancer and non-squamous cell lung cancer.

Details of the process used to screen the studies are listed in Figure 1. The characteristics of the included studies are presented in Table 1. Of the 19 included studies, 8 assessed effects using WHO criteria, while 11 used RECIST criteria. The regimens applied in these studies include: Irinotecan + nedaplatin (4 studies), gemcitabine + nedaplatin (5 studies), taxane + nedaplatin (6 studies), S-1 + nedaplatin (1 study), nedaplatin single agent (2 studies), and a mixed doublet regimen (1 study). The clinical responses to respective treatment regimens were defined as complete or partial according to criteria applied in each study. After reviewing the full texts, we included 12 studies covering a total of 867 patients describing the efficacies of nedaplatin-containing regimens in squamous cell lung cancer and non-squamous cell lung cancer. We also reviewed the eligibility criteria for each study and found that only one study focused on the efficacy in elderly people [13]. Other general inclusion criteria are described in detail in the method section. Five studies included not-naïve-to-chemotherapy patients. We inspected each study and found that 4 of them declared no difference in response rate between previously untreated and treated patients [9, 12, 16, 18]. The remaining study included one recurrent patient after chemotherapy [8]. There was no difference in gender distributions in the included cases. 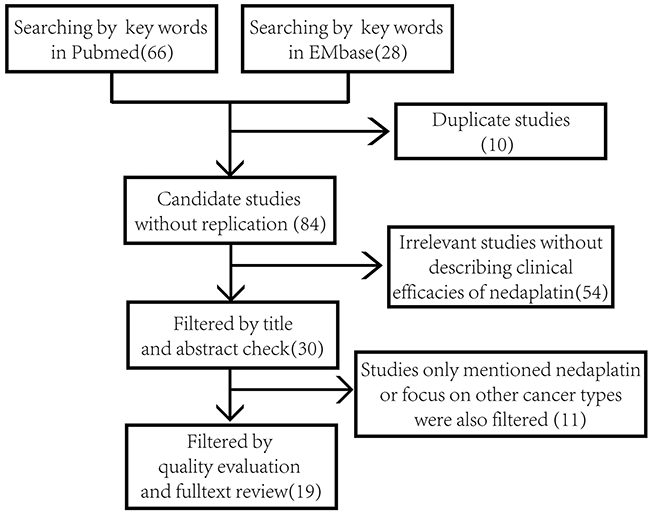 Figure 1: Flow diagram of the process of literature retrieval and filtering. Numbers in the brackets refer to the sum of studies after each part of the screening. 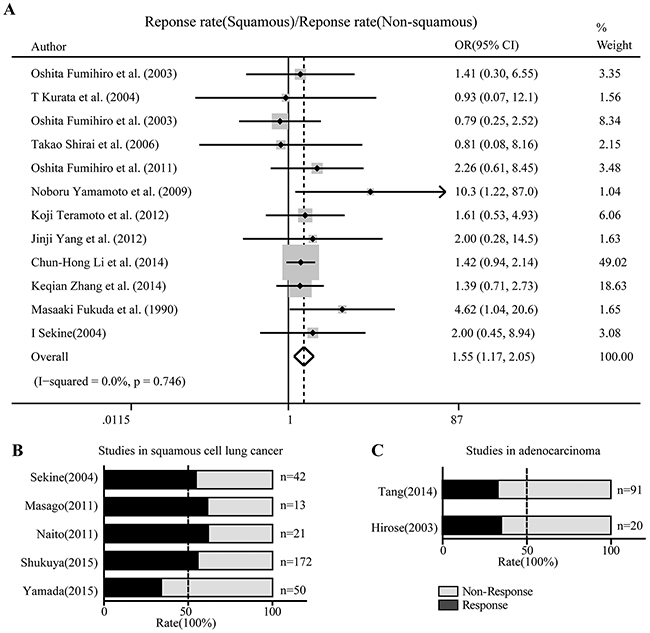 Figure 3: Prognosis after Nedaplatin-based chemotherapy. Comparison of overall survival (A) and progress free survival (B) for gemcitabine (GEM), irinotecan (CPT-11) or taxane (docetaxel or paclitaxel) plus nedaplatin in NSCLC.

Begg’s test and Egger’s test were used to evaluate publication bias. No significant biases were found in our analysis: Begg’s test, p = 0.533; Egger’s test, p = 0.354. According to the funnel plot in Begg’s test, all studies were within the 95% confidence limitations (Figure 4A). Another Egger’s publication bias plot also suggested little bias among included studies (Figure 4B). The heterogeneity test yielded an I2 of 0.0% and p value of 0.746, which indicates little heterogeneity across the included studies. Therefore, the fixed effects model was introduced in the statistics. We also conducted a sensitivity analysis using the metainf command in STATA 12.0. Omitting any one study did not significantly change the pooled OR value (Figure 4C). 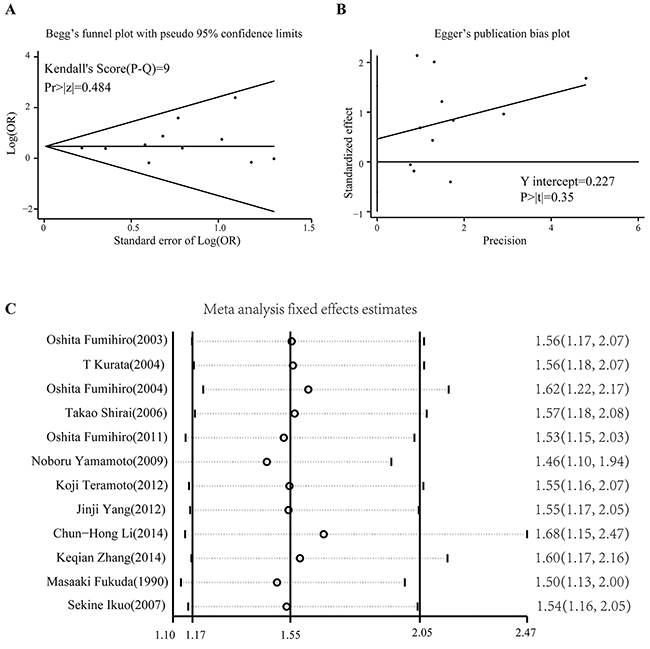 It should be noted that no studies directly focused on prognosis after nedaplatin treatment in squamous cell and non-squamous cell lung cancers. The available studies indicate CPT-11 or taxane plus nedaplatin regimens were associated with longer overall and progress-free survival than gemcitabine plus nedaplatin in NSCLC. Early research found that the combination of nedaplatin plus CPT-11 or paclitaxel produced synergistic antitumor activity in a sequence-dependent manner. Kanzawa et al [29] reported that concurrent administration of nedaplatin and CPT-11 produced a remarkably synergistic interaction in NSCLC and a small cell lung cancer cell line. Further analysis revealed a 10-fold enhancement of DNA topoisomerase I inhibition in the presence of μg/ml concentrations of nedaplatin. Another study showed that administrating paclitaxel prior to nedaplatin produced significantly stronger antitumor activity and lower body weight loss than nedaplatin prior to paclitaxel in a mouse xenograft model [30]. Because few studies compared survival between nedaplatin-based doublet regimens, we can only describe overall and progress-free survival for these studies. However, a multicenter phase III study reported that overall survival time for nedaplatin plus docetaxel (median: 13.6 months) was 2.2 months longer than for cisplatin plus docetaxel (median: 11.4 months) [20]. To confirm that nedaplatin produces a longer-term benefit in squamous cell lung cancer than non-squamous cell lung cancer, well-controlled head-to-head studies focusing on survival will be required.

This meta-analysis has several limitations. Subjects of the included studies were mostly from East Asia. Owing to health insurance policies and cost-effectiveness considerations, nedaplatin is seldom prescribed in western countries. Consequently, our conclusions will need to be reassessed in American or European patients. Although little heterogeneity was statistically observed, confounding factors may have affected each study. For example, whether nedaplatin was administered as monotherapy or combination therapy and differences between doublets would all affect the pooled OR. But considering that these factors were present in a minority studies and few studies met the requirements for pooled analysis, it is reasonable to perform this meta-analysis on nedaplatin-based treatment. To control for these confounding factors, a larger sample size and stratified analysis will be needed in future studies. A previous meta-analysis confirmed that nedaplatin achieved an overall response, overall survival, and survival probability equivalent to cisplatin in advanced NSCLC, but efficiency among different histology subtypes was not compared [31].

In sum, our meta-analysis indicates that nedaplatin-based regimens produced a better response rate in squamous cell than non-squamous cell lung cancers. Differences in toxicities of nedaplatin- and cisplatin-based regimens deserve physicians’ attention when treating NSCLC. Because different combinations of nedaplatin may influence the efficacy and patient survival, more clinical studies will be required in the future.

We screened studies of nedaplatin-based treatments in advanced or relapsed NSCLC patients. To serve the purpose of our analysis, studies describing tumor responses to nedaplatin-based regimens in squamous cell and non-squamous cell lung cancers using the Response Evaluation Criteria in Solid Tumors (RECIST) and World Health Organization criterion (WHO) were included in the pooled analysis. Because there has been only limited research focusing on comparison of squamous cell with non-squamous cell lung cancer, we conducted our searching in a comprehensive manner. We searched PubMed by using terms “254-S OR Nedaplatin OR Aqupla AND Lung cancer”. An EMBASE search was performed using the terms “nedaplatin OR 254-S OR Aqupla AND Lung cancer”. Included were English-written randomized controlled trials (RCT), case-control and cohort studies published up to December 1, 2015. No area or district filters were added during the search. We also scanned clinicaltrials.gov for possible completed trials that had not yet been published. However, no relevant records were found. After deduplification, studies were subjected to title and abstract scans. Studies that did not describe the clinical efficacy of nedaplatin were removed (n=54). Through quality evaluation and fulltext review, studies that just mentioned nedaplatin or focused on other cancer types were also filtered (n=11). Twelve of the 19 studies describing tumor responses in squamous cell and non-squamous cell lung cancers were included in a pooled forest map, while those that described only the tumor response rate in the two sets were included in a proportional histogram. Other eligibility criteria included: 1) Eastern Cooperative Oncology Group (ECOG) performance status score no more than 3; 2) sufficient bone marrow function (white blood cell count at least 4,000/mm3 (μL) or absolute neutrophil count at least 2,000/mm3 (μL), platelet counts of at least 100,000/mm3 (μL), hemoglobin level of at least 9.0 g/dL and; 3) sufficient hepatic function (serum total bilirubin level no more than 1.5 mg/dL, serum aspartate aminotransferase and alanine aminotransferase level no more than 100 IU/L). Interest end points were objective response rate and disease control rate. Studies with poor quality or no interest endpoints were excluded.

The following information was extracted from the included studies by two investigators: family name of the first author, year of publication, clinical trial stage (or type), doublet regimens applied, chemo-naive status of subject, numbers of squamous cell and non-squamous cell lung cancer patients whose responses were measurable, criteria used to evaluate efficacy of specific studies. Other characteristics such as common hematologic and non-hematologic toxicities, median overall survival, and progress-free survival were also recorded.

Results were presented as ORs of the response rate in squamous cell lung cancer to the rate in non-squamous cell lung cancer. Heterogeneity among the ORs was assessed by applying the Cochran Q and I2 tests. A fixed effect model was used when I2 was less than 50%. Otherwise a random effects model was applied. The Egger regression asymmetry test was used to detect publication bias, characterized as p value less than 0.1. Pooled ORs were plotted as a forest map, and studies with only one arm were expressed by plotting a proportional histogram in GraphPad Prism 5. All statistical analyses were performed using the STATA software package (version 12.0) (Stata Corp Station, TX, USA).

This work was funded by Natural Science Foundation of China (Grant No. 81572608, 81301929). The authors thank the China Scholarship Council(CSC) for supporting this work. The funders had no role in study design, data collection and analysis, decision to publish, or preparation of the manuscript.