Azacitidine (AZA), the reference treatment for most higher-risk myelodysplastic (MDS) patients can also improve overall survival (OS) in elderly acute myeloid leukemia (AML) patients ineligible for intensive chemotherapy, but reliable biological markers predicting response and OS in patients treated with AZA are lacking. In a preliminary study, we found that an increase of the percentage of BCL2L10, an anti-apoptotic member of the bcl-2 family, was correlated with AZA resistance. In this study, we assessed prospectively by flow cytometry the prognostic value of BCL2L10 positive bone marrow mononuclear cells in 70 patients (42 MDS and 28 AML), prior to AZA treatment.

Azacitidine (AZA) is the reference treatment for most higher-risk myelodysplastic syndromes (MDS) patients [1] which also improves overall survival (OS) in elderly acute myeloid leukemia (AML) patients ineligible for intensive chemotherapy (IC) [2]. In MDS, conventional biological factors included in the international prognosis scoring system (IPSS) are BM blasts percentage, karyotype and number of cytopenias. In the revised IPSS (IPSS-R), BM blasts percentage, cytogenetic risk group, hemoglobin, platelets and absolute neutrophil counts are used as parameters. The French Prognostic Scoring System (FPSS) is based on ECOG, presence of circulating blasts, red blood cell transfusion dependence and cytogenetic risk group. These scores can predict response and OS to AZA treatment [3–6]. Several genomic alterations detected by single nucleotide polymorphism (SNP) array and methylation profiles-such as TET2 mutations-have also been reported to predict better response to hypomethylating agents (HMA). Nevertheless, most of those results were not reproducible, did not allow to predict survival or were hardly applicable in routine practice [7–11]. An exception is the consistently poor prognosis associated with TP53 mutation, but this mutation is largely correlated with the presence of a complex karyotype [12].

BCL2L10 is an antiapoptotic [13–15] member of the bcl-2 family known to play a role in the chemoresistance of various cancers [16]. Overexpression of BCL2L10 has been reported to suppress apoptosis through inhibition of cytochrome c release from mitochondria [14]. The BCL2L10 protein undergoes several steps of regulation including final ubiquitinylation [17], confirming the interest to quantify this protein by flow cytometry (FCM) rather than to explore gene expression only [18]. In our retrospective study in 77 MDS patients evaluated at various time points after AZA onset (but generally not before AZA), we established by FCM that a high percentage of BCL2L10 positive bone marrow mononuclear cells (BMMC) was significantly associated with a lower response rate and shorter survival [18]. In this context, the aim of the present study was to prospectively validate the potential of BCL2L10 expression as a predictive biomarker of AZA treatment in MDS and AML. 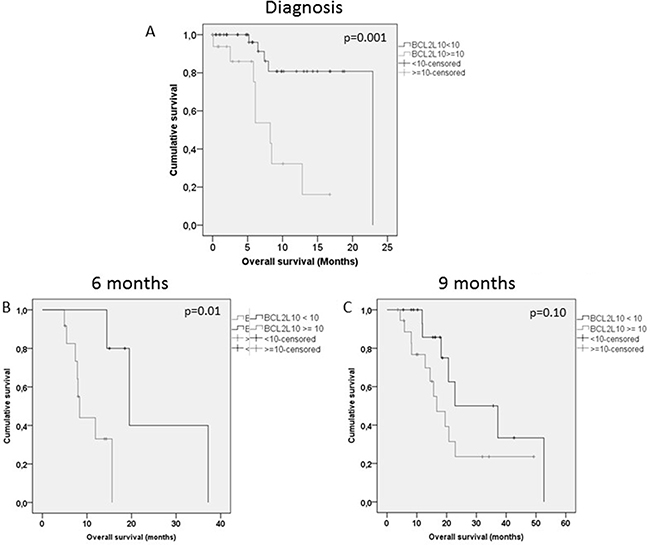 Figure 1: Overall survival according to BCL2L10 in patients at AZA onset, 6 months and 9 months.

Current results confirm prospectively, in a broader cohort of 171 MDS or AML patients, those of our first report. We also showed an increase of BCL2L10 positive cell percentage during AZA treatment, which was significantly higher in resistant than in responding patients. The median level of BCL2L10 expression was higher in AZA resistant patients (median 16%) than in responders (median 5%) (p = 0.005). Median survival after BCL2L10 evaluation was significantly shorter in patients with more than 10% versus patients with less than 10% BCL2L10 positive cells during AZA treatment (9 months [6–11.9] vs 15.6 months [9.6–21.7], p = 0.001).

Other prognostic factors and multivariate analysis

We also confirmed the progressive increase in BCL2L10 expression during AZA treatment, observed in our previous retrospective series [18], with a greater increase in patients resistant to treatment.

The flow cytometry assay we used can be performed routinely in patients before the onset of AZA. Patients with more than 10% BCL2L10 bone marrow mononuclear positive cells at AZA onset, who respond poorly to single agent treatment with AZA, may require alternative therapeutic approaches, including combinations of AZA with other drugs [22–28] which are currently under investigation.

MDS and AML patients, diagnosed according to WHO criteria and treated with AZA, were prospectively included in 6 centers (University hospitals of Paris - Saint Louis, Paris Saint Antoine, Paris Avicenne, University hospital of Nice, Antoine Lacassagne center (Nice) and Princesse Grace hospital (Monaco)) in a cooperative study (https://clinicaltrials.gov/: NCT 01210274). Patients were treated with AZA (75 mg/m²/day, 7 days every 4 weeks), through the drug label in IPSS int-2 or high MDS, or AML with marrow blasts less than 30%, and in compassionate use programs in AML with > 30% marrow blasts and IPSS low and int-1 MDS. Patients had bone marrow evaluation every 3 cycles. Patients without response according to IWG 2006 criteria for MDS [19] or by Cheson et al. (2003) criteria for AML [20] at 6 cycles were considered as non-responders. Responses included in MDS: complete response (CR), partial response (PR), marrow CR (mCR), and hematologic improvement (HI). For AML, they included CR, CRi, and PR. Patients with stable disease (SD), progression or not evaluable after 3 or 6 cycles were considered as no responders.

Flow cytometry was performed on fresh BMMC obtained before AZA onset, and after 3 or 6 cycles of treatment. BMMC were isolated by density centrifugation (Ficoll-Paque Plus). Cells were fixed by paraformaldehyde 3%, permeabilized with Triton 0,1%, incubated with an anti-human BCL2L10 rabbit antibody (Cell Signaling Technology, Beverly, MA, USA) followed by secondary donkey anti-rabbit FITC-labeled antibody and tested with a Canto Becton Dickinson flow cytometer. Examples of flow plots are shown in Supplementary Figure 1.

All authors have nothing to disclose.