Prognostic value of DNA repair genes based on stratification of glioblastomas

4Department of Neurology, The Affiliated Huai’an Hospital of Xuzhou Medical University and The Second People’s Hospital of Huai’an, Huai’an, China

According to the World Health Organization classification of tumors of the central nervous system, Glioblastoma multiforme (GBM) is the most common and lethal type of brain tumor [1]. It is exhibited by infiltrating neighboring tissue and shape-shifting without typical scope [2]. This tumor is highly invasive and is often combined with healthy brain tissue, which leads to a dismal prognosis after surgical resection [2]. Generally, the median survival time for newly diagnosed patients is within 2 years after standard therapy, which is surgical resection followed by adjuvant radiation therapy [3]. The satellite tumor cells which have spread from the primary tumor usually escape from treatment and lead to tumor recurrence [2].

The major function of DNA repair genes is responding to DNA damage that is induced in cells and through external environmental factors [4]. Mutation of these DNA repair genes could lead to defects or limitation of DNA repair abilities. This would further cause accumulation of DNA damage in vivo which increases the risk of canceration [5, 6]. Cancer tissues over-express DNA repair genes and therefore develop greater DNA repair capacity than normal tissue, resulting in therapy resistance [5]. In recent years, it has been proven that the occurrence of Glioma is closely related to the abnormal gene expression or abnormal protein structure of oncogenes and cancer suppressor genes [7]. Therefore, the application of microarrays plays an important role for glioma diagnosis, treatment and prevention. For instance, exploring the DNA damage signals and DNA repair process would help researchers find a new way of discussing pathogenesis of glioma, which could indicate the growth activity of tumor tissue and guide the clinical treatment and prognosis.

In this present study, a total of 539 glioblastoma tumor patient samples were selected and analyzed, from the Cancer Genome Atlas (TCGA) database, to find the relationship between the expression patterns of GBM associated DNA repair genes and different prognoses. Different molecular subtypes were built for further identification of the correlation between disease prognosis and different driver gene expression. Finally, a total 5 driver genes were found to be highly predictive of cancer recurrence and recurrence-free survival of GBM patients. 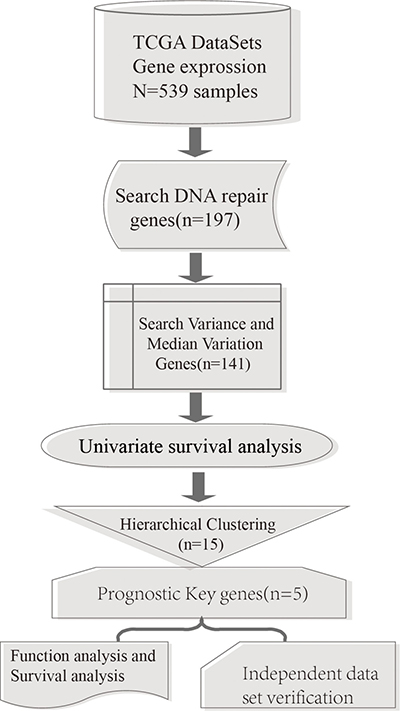 Unsupervised clustering was performed on the 15 DNA repair genes that were determined to significantly influence prognosis, shown in Figure 2. According to this figure, it can be seen that these 15 genes were divided into four groups. It can be seen that the number of samples were quite different between the 4 subtypes. Cluster 3 hold the largest amount of samples in the four clusters. The reason for the different sample sizes is that these 15 genes were screened out through simple factor analysis and the 4 clusters were clustered by these 15 selected genes. The number of samples in each cluster is random. Among each group, each gene showed significant differences in gene expression level. For example, in cluster 4, the expression levels of APEX1 (Apyrimidinic Endodeoxyribonuclease 1), PARP2 (Poly (ADP-Ribose) Polymerase 2), DCLRE1A (DNA Cross-Link Repair 1A), MDC1 (Mediator of DNA Damage Checkpoint 1), and DCLRE1C (DNA Cross-Link Repair 1C) were higher compared to the other clusters. In cluster 2, the expression levels of DDB2 (Damage Specific DNA Binding Protein 2), FAH (Fumarylacetoacetate Hydrolase) and RNH1 (Ribonuclease/Angiogenin Inhibitor 1) were higher than the other clusters.

All samples from the four molecular subtypes were analyzed for prognostic outcome using the Kaplan-Meier [9] single factor survival analysis, shown in Figure 3. It can be seen that the prognosis of cluster 4 is significantly better than the other three clusters. The most significant difference occurred between cluster 3 and cluster 4, which was 0.0002451. This indicates that these 15 DNA repair genes could significantly distinguish different prognostic outcomes of different samples. The analysis of age distribution of the four clusters are shown in Table 2. Based on this analysis, the age distribution of cluster 4 was significantly different from the other three clusters, especially cluster 3 (0.0002451). This suggests that the positive prognosis of cluster 4 could be age-related. 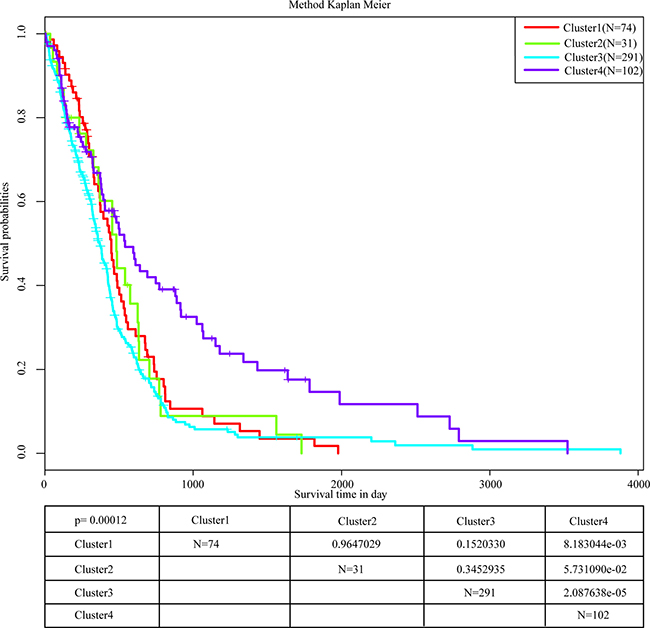 Figure 3: Prognostic analysis of 4 molecular subtypes. The most significant difference occurs between cluster 3 and cluster 4, and the cluster 4 survival rate of 5 years is significantly higher than the rate of other clusters. 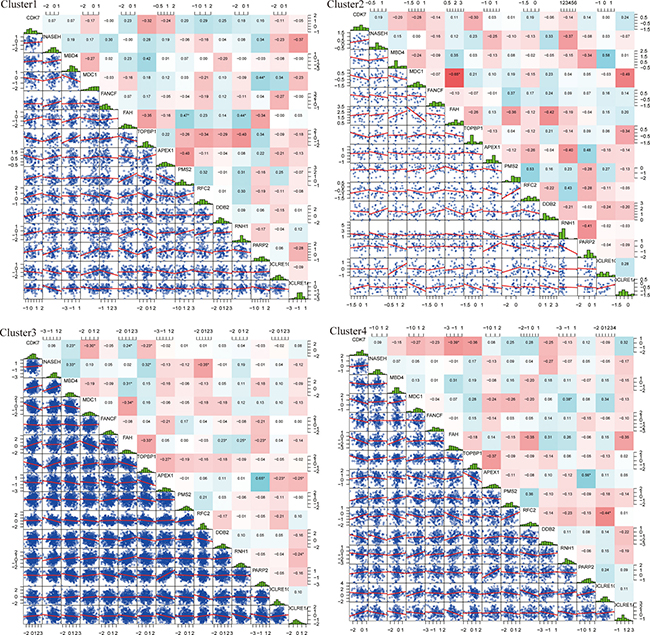 In summary, alteration of the expression model of DNA repair genes could be the reason for different clinical survival rates between cluster 4 and the other three clusters. Among them, CDK7, DDB2, RNH1, RFC2 and FAH could act as potential driver genes.

Functional enrichment analysis of driver genes from the four subtypes was performed through R package, clusterProfiler [11]. The results are shown in Table 3. It can be seen that genes CDK7, DDB2 and RFC2 were significantly enriched in 2 biological pathways, global genome and nucleotide-excision repair, as well as 3 Molecular Function which were mainly related to ATPase activity. In addition, DNA repair related biological pathways were enriched by the 5 genes.

Table 3: The significantly enriched GO terms of these 5 driver genes

To further explore the influence of these 5 driver genes on prognosis outcome, COX multivariate survival analysis was utilized. Likelihood ratio was used for analyzing the prognosis significance. The results were shown in Figure 5A and were found to be significant, p = 9.74e-05, which indicated that all 5 genes showed significant influence on prognosis. 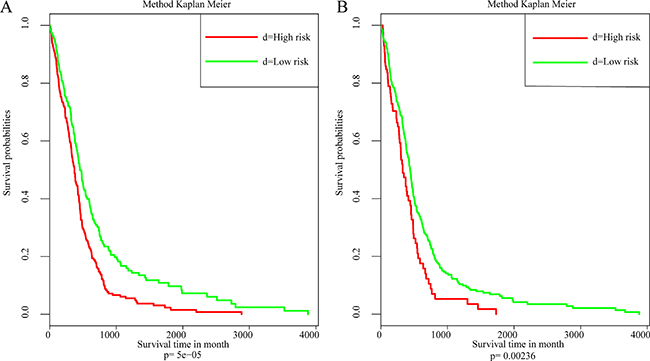 Another gene expression profile from The Cancer Genome Atlas (TCGA) database [8] was utilized for external data validation which was based on the AgilentG4502A_07_2 array. A total of 483 patient samples and 466 with their clinical follow-up information were available. The results of COX multivariate survival analysis are shown in Figure 6A. It can be seen from the data that the influence of driver genes on prognosis were verified Figure 6B.

Glioblastoma multiforme (GBM) is a common brain cancer with a dismal prognosis [1]. Although a lot of effort has been focused on increasing the GBM survival rate in recent years, the mortality rate remains high. Traditional standard therapy, which involved surgical resection and adjuvant radiation therapy, was insufficient for predicting the risk of tumor recurrence and satellite tumor transfer [2, 3]. With the development of microarray technology, increasing data resources regarding DNA repair genes are available for comparing and analyzing in the cancer field. For this particular study, the purpose was to obtain the gene expression profile of DNA repair genes across different molecular subtypes, then explore the potential relation between prognostic value and expression patterns of DNA repair genes.

To be more specific, bio-information of GBM, obtained from 539 glioblastoma tumor patients in TCGA, was analyzed to determine the molecular characteristics of genes that were associated with prognosis value. In this study, a total of 15 key genes were determined through analyzing the expression level of DNA repair genes, based on gene expression profiles and, prognosis differences of GBM patients were compared to the expression patterns of four different subtypes. It can be seen from the results that the survival times of patients are significantly affected by the expression level of these DNA repair genes [5]. To be more specific, increasing DNA repair processes in cancer cells would lead to multi-drug resistance [12], which would result in a dismal prognosis.

A total of four molecular subtypes of GBM were screened by unsupervised clustering and each of them was shown to have different gene expression levels. The results indicated that these genes tend to play independent roles in biological pathways, because the overall correlation of these 15 genes was small. Compared to the correlation of individual gene in different subtypes, it can be seen that the correlation of several genes changed significantly among the four subtypes. In cluster 2, the correlation coefficient (MDC1, FAH) was −0.65 while in cluster 4, the value was 0.07. These examples indicated that the same genes generate different regulated functions in different situations which need to be further explored by literature mining.

In order to identify the expression difference between cluster 4 and the other three clusters, the correlation coefficient of cluster 4 was compared to the correlation coefficient matrix of the other three clusters. Comparing cluster 3 and cluster 4, CDK7 and FAH were significantly positive correlated in cluster 3 but negatively correlated in cluster 4. The alteration of the expression model of DNA repair genes could be the reason for different clinical survival rates between cluster 4 and other 3 clusters. Among them, CDK7, DDB2, RNH1, RFC2 and, FAH could be the potential driver genes.

From literature mining, it can be seen that the expression capacity of 5 driver genes were revealed to be a potential predictor of prognosis [12, 13]. Up-regulation of CDK7 in gastric cancer cells has been shown to promote tumor cell proliferation and predicts poor prognosis [14]. It has been reported as a typical treatment target in standard cancer therapy and showed significant function in different cancers [14–16]. DDB2 has been considered a tumor suppressor and contributes to favorable treatment outcome [13]. DDB2 was found to be involved in interstrand cross-link repair which is associated with good prognosis in GBM. In contract, in bad prognosis groups, DDB2 has showed low expression [17]. Histone deacetylase inhibitor (HDACi) therapy is a promising anticancer epigenetic treatment which is regulated by RNH1. RNH1 is reported to be a regulator of HDACi resistance, inducing drug resistance in gastric cancer [18].

In summary, molecular characterization of GBM screened from a DNA repair gene expression database shows the potential of predicting the prognosis and selecting individual targeted therapeutic approaches for different molecular subtypes of GBM. This approach could make the clinical diagnosis of GBM cheaper, more precise and, faster. However, the results required further validation with an increased number of patient samples.

For the same type of disease, different patients may have a different prognosis. These may be related to different levels of gene expression. First, genes with obvious expression alterations were screened. Then, the variance and median of the expression level of these genes were calculated in all selected samples. Genes which had above 20% of the genetic variance and the top 20% genetic median were selected from database.

Screening of DNA repair genes which related to prognosis

The survival time of patients is affected by the expression level of DNA repair genes [5]. Potentially altered genes, which were screened from patient samples, were separately analyzed using single factor survival analysis through R survival software [20]. Genes with P-values less than 0.05 and variance greater than 0.7 were selected.

Another gene expression profile from The Cancer Genome Atlas (TCGA) database [8] was utilized for external data validation, which was based on the AgilentG4502A_07_2 array. A total of 483 patient samples and their clinical follow-up information were available. The influence of driver genes on prognosis was verified.

This study was supported by the “2016 Advanced Technology Research of Taihe Hospital”.