Overexpression of ErbB2 is found in 25% to 30% of human breast cancers [1, 2] and about 4% to 50% of human gastric cancers according to different examination methods and criteria [3]. Trastuzumab, a therapeutic anti-ErbB2 humanized antibody, was approved by the US Food and Drug Administration (FDA) for clinical use for ErbB2-overexpressing metastatic breast cancer and metastatic gastric and gastro-esophageal junction cancer. Despite the effectiveness of trastuzumab, about 70% of patients could not respond to trastuzumab treatment (de novo resistance), and the majority of trastuzumab-responsive patients develop resistance within 1 year of treatment initiation (acquired resistance) [4–6]. The addition of pertuzumab, another anti-ErbB2 humanized antibody, to trastuzumab has enhanced the antitumor efficacy of trastuzumab and delayed trastuzumab resistance [7]. However, the objective response rate is only 24.2% and complete response only around 8% [8]. Thus, novel therapeutic anti-ErbB2 antibodies are urgently needed to overcome the resistance to trastuzumab-based therapy.

In our previous studies, H2-18, an ErbB2 domain I-specific fully human antibody, exhibited a greater antitumor effect than trastuzumab and pertuzumab, either alone or in combination, in innate trastuzumab resistant cancer cell lines [11, 12]. Here we investigated whether H2-18 could also overcome acquired resistance to trastuzumab in ErbB2-amplified cancers. 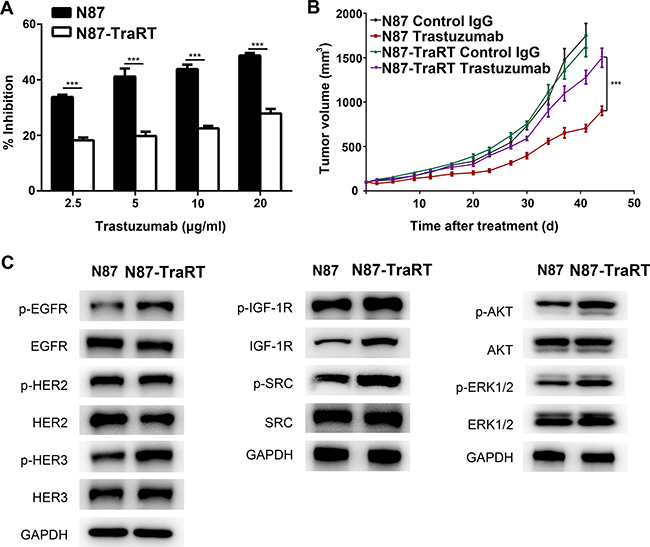 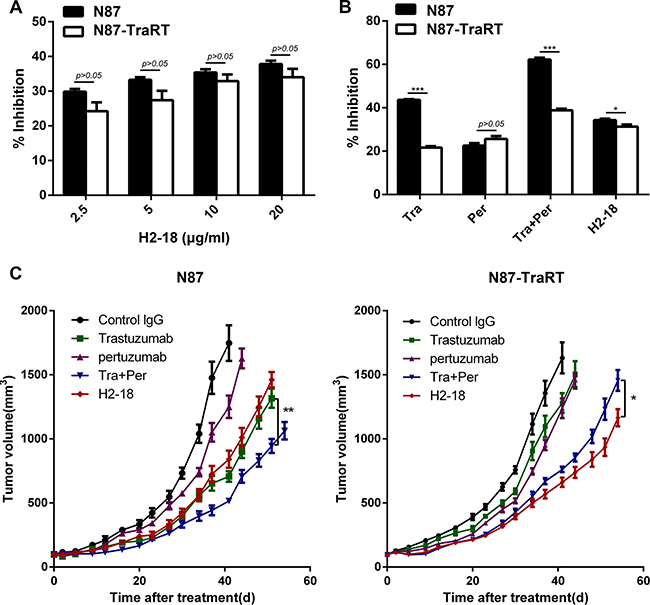 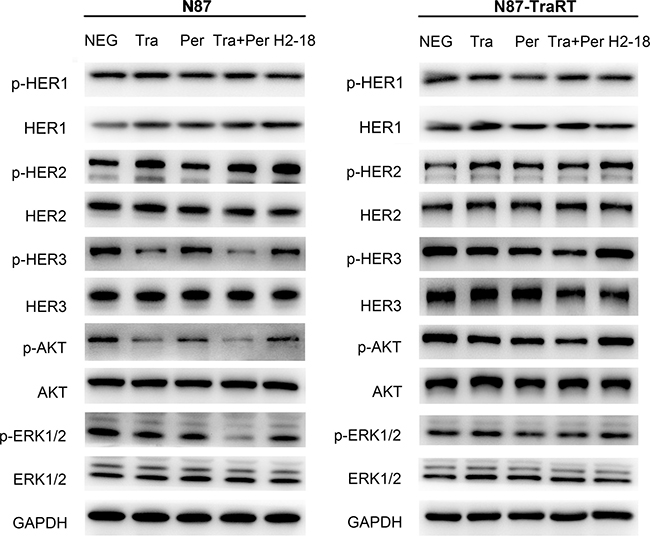 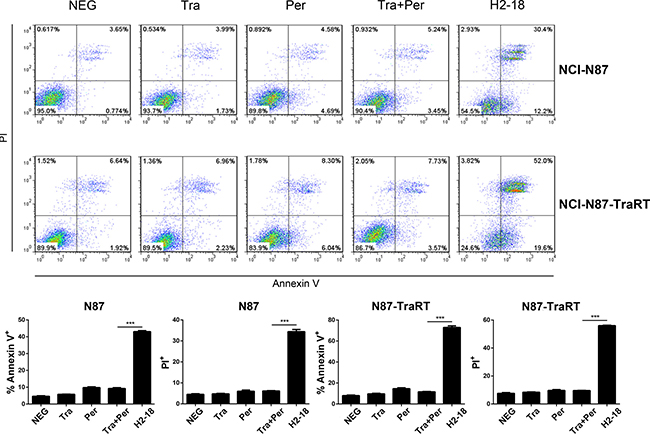 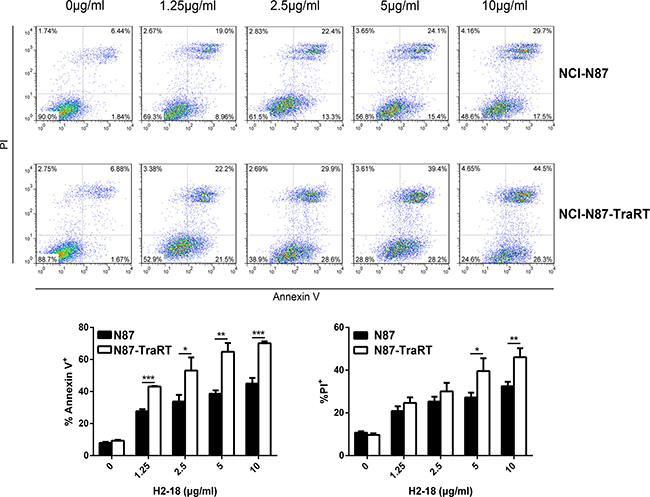 Trastuzumab and pertuzumab, either alone or in combination, did not increase ROS production in both NCI-N87 and NCI-N87-TraRT cell lines. However, the ROS level was significantly induced by H2-18 (Figure 6A). Next, we determined the cell death induced by H2-18 with or without the ROS scavenger N-acetyl-L-cysteine (NAC). Our results showed that NAC could nearly abrogate the cell death-inducing ability of H2-18 in both NCI-N87 and NCI-N87-TraRT cell lines (Figure 6B). Thus, increased ROS production induced by H2-18 results in programmed cell death. 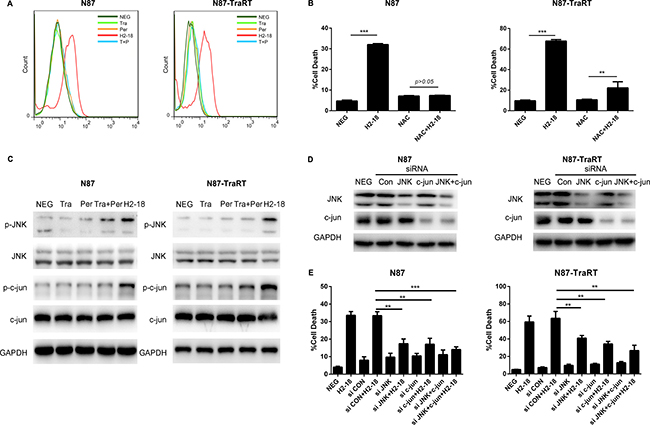 Western blot was used to assess the effect of trastuzumab, pertuzumab, trastuzumab plus pertuzumab, and H2-18 on JNK/c-Jun activation. Trastuzumab and pertuzumab, either alone or in combination, have no effect on phosphorylation of both JNK and c-Jun, whereas H2-18 significantly increased p-JNK and p-c-Jun in NCI-N87 and NCI-N87-TraRT cell lines (Figure 6C). Next, we knocked down the expression of JNK, c-Jun, or both of them using specific small-interfering RNAs (siRNAs). In both NCI-N87 and NCI-N87-TraRT cell lines, all siRNA knockdown of JNK, c-Jun, or both of them could partially abolished H2-18-induced cell death (Figure 6D, 6E). Collectively, H2-18 treatment leads to JNK/c-Jun activation, which is reported to contribute to induction of cell death.

The dominant mechanisms of intrinsic resistance are independent of ErbB2 receptor activity, relating to inactive ErbB2 receptor and aberrations located in downstream signals [13]. The predominant resistance-generating alterations were PI3KCA mutation and loss of PTEN, which lead to persistent activation of PI3K/AKT signaling pathway [14, 18–21]. In our previous study, HCC-1954 harbors an activating PIK3CA mutation (H1047R). Both HCC-1954 and HCC-1419 have low expression of PTEN [20]. H2-18, an ErbB2 domain I-specific antibody, showed the ability to overcome trastuzumab resistance in intrinsic resistant cell lines especially HCC-1954 [12].

Different from de novo resistance, almost all the acquired trastuzumab resistance mechanisms depend on ErbB2 receptor activity, involving active ErbB2 and ErbB2-dependent aberrations located on the target signal level [13]. Taking into account that intrinsic resistance exists before trastuzumab application, it is viable to produce acquired resistant model by selective pressure of trastuzumab on trastuzumab-sensitive cells. Here, we developed an ErbB2-amplied acquired resistant model NCI-N87-TraRT from the trastuzumab-sensitive cell line NCI-N87. Compared with NCI-N87, the co-receptors of ErbB2 (EGFR and ErbB3) were activated in NCI-N87-TraRT. IGF-1R and p-IGF-1R were also upregulated. In addition, the phosphorylation of downstream molecules PI3K, MAPK and SRC were also observed in NCI-N87-TraRT. Our results indicated that upregulated activity of RTK, with HER2 as a preferential dimerization receptor partner, may contribute to acquired resistance to trastuzumab. Although H2-18 did not inhibit in vitro cell proliferation of NCI-N87 and NCI-N87-TraRT cells as effectively as trastuzumab plus pertuzumab, H2-18 was more effective than trastuzumab plus pertuzumab in inhibiting the in vivo growth of NCI-N87-TraRT tumors. Further studies showed that H2-18 could induce cell death far more potently than trastuzumab plus pertuzumab. As is suggested in our previous study with de novo resistant models, the enhanced programmed cell death (PCD)-inducing ability of the H2-18 antibody was responsible for its antitumor efficacy [12]. And PCD induced by H2-18 was mainly mediated by RIP1-ROS-JNK-c-Jun signaling pathway [12]. Here, p-JNK and p-c-Jun were increased in both NCI-N87 and NCI-N87-TraRT cell lines. The level of ROS was also significantly induced by H2-18. Furthermore, the ROS scavenger NAC was able to abrogate the cell death-inducing ability of H2-18. Thus, we concluded that the superior in vivo antitumor efficacy of H2-18 in NCI-N87-TraRT cells may be also attributable to its potent PCD-inducing activity, dependent on RIP1-ROS-JNK-c-Jun pathway.

H2-18 was expressed and purified using the method as described in our previous report [11]. Trastuzumab was purchased from Roche Ltd. The pertuzumab antibody [22] was expressed and purified using the method described in our previous studies [23]. The ErbB2-overexpressing human gastric cancer cells NCI-N87 were purchased from the American Type Culture Collection (ATCC). Trastuzumab-resistant subline NCI-N87-TraRT cell line was developed from NCI-N87 cell line, which was treated with 10μg/ml trastuzumab consecutively for 2 years. All the cells were authenticated twice by morphologic and isoenzyme analyses during the study period. Cell lines were routinely checked for contamination by mycoplasma using Hoechst staining and consistently found to be negative. Six-week-old female BALB/c nude mice were obtained from the Shanghai Experimental Animal Center of Chinese Academy of Sciences. All animals were treated in accordance with guidelines of the Committee on Animals of the Second Military Medical University.

Cells were seeded at a density of 3× 103 cells per well in a 96-well plate in a humidified 37°C and 5% CO2 atmosphere. After a 24-h attachment, the cells were treated with 10 μg/ml of control IgG, trastuzumab, pertuzumab, trastuzumab plus pertuzumab, and H2-18 for an additional 5 days. Medium was refreshed every 2 or 3 days. Cell proliferation was determined by Cell Counting Kit CCK-8/WST-8 (DOJINDO, Japan).

Cells were treated with control IgG (10 μg/ml), trastuzumab (10 μg/ml), pertuzumab (10 μg/ml), trastuzumab plus pertuzumab (10 μg/ml for each), and H2-18 (10 μg/ml) for 4 h at 37°C. After washing twice with PBS, cells were lysed in SDS lysis buffer and then were subjected to SDS-PAGE. The proteins were transferred to polyvinylidene difluoride (PDVF) membrane and immunoblotted with indicated primary antibodies and Horseradish peroxidase (HRP)-conjugated secondary antibodies (all from Cell Signaling Technology). Finally, detection was performed using the enhanced chemiluminescence reagents (Plus-ECL, PerkinElmer, MA, USA) or chemiluminescence reagents (Millipore, MA, USA).

Cells were seeded in flat-bottomed 24-well plate at a density of 1 × 105 cells per well in the growth medium and grown overnight at 37°C in a humidified incubator with 5% CO2. Next day, cells were treated with 10 μg/ml of control IgG, trastuzumab, pertuzumab, trastuzumab plus pertuzumab, and H2-18 for 24 h. Cell death was measured by using Dead Cell Apoptosis Kit with Annexin V Alexa Fluor® 488 & Propidium Iodide (PI) (Life Technologies) according to the manufacturer’s protocol. Briefly, cells were harvested, washed twice with binding buffer and then resuspended in 100 μl binding buffer per tube. Five microliter 488-conjugated Annexin-V and 0.1 μl PI were added to cell suspension. After 15 min incubation at room temperature, the cells were washed with binding buffer and resuspended in 200 μl binding buffer, then analyzed by flow cytometry on a FACSCalibur (Becton Dickinson).

For the inhibitor assay, overnight grown NCI-N87 or NCI-N87-TraRT cells were first treated with 10 mM NAC (a ROS scavenger, selleck) for 2 h before H2-18 was cultured with the cells. After 24 h incubation at 37°C, cell death assay was carried out as described in previous section.

The ROS level in NCI-N87 and NCI-N87-TraRT cells was evaluated with total reactive oxygen species (ROS) assay kit (eBioscience). NCI-N87 and NCI-N87-TraRT cells were seeded in a flat-bottomed 24-well plate. Next day, cells were treated with indicated anti-ErbB2 mAbs or the mAb combination for indicated time. Then, cells were harvested and incubated with ROS assay stain for 60 min at 37°C. Then, the fluorescence of the cells was measured with FACSCalibur (Becton Dickinson) using excitation wavelength of 488 nm and emission wavelength of 520 nm.

Transfection of siRNA was conducted using DharmaFECT 4 transfection reagent (Dharmacon) according to the manufacturer’s instructions. The control siRNA (5′-UUC UCC GAA CGU GUC ACG UTT-3′), JNK siRNA (5′- GCC CAG UAA UAU AGU AGU ATT-3′), and c-Jun siRNA(5′-ACG CAA ACC UCA GCA ACU UTT-3′) were purchased from GeneParma Company (Suzhou, China). NCI-N87 and NCI-N87-TraRT cells were transfected with siRNA for 48 hour and then subjected to western blot. After siRNA transfection for 48 hour, the cells were incubated with or without H2-18 for another 24 h before cell death assay.

Six-year-old female BALB/c nude mice were implanted with NCI-N87 or NCI-N87-TraRT cells (1 × 107 per mouse) in right mammary fat pad. When tumors reached an average volume of 100 mm3, mice were grouped to treatment cohorts of 10 mice each randomly. Control IgG (10 mg/kg), trastuzumab (10 mg/kg), pertuzumab (10 mg/kg), trastuzumab plus pertuzumab (5 mg/kg for each), and H2-18 (10 mg/kg) were injected intravenously twice a week for 4 weeks. Tumors were measured with digital calipers twice a week and tumor volumes were calculated by the formula: volume (mm3) = length × (width) 2 /2.

The data were tested for parametric distribution before applying parametric analysis. Statistical analysis was conducted by unpaired Student’s t-test to identify significant differences unless otherwise indicated. Differences were considered significant at P < 0.05.