Changing trends in the prevalence of anencephaly in Liaoning province of Northeast China from 2006–2015: data from a population-based birth defects registry

Anencephaly is defined as an absent calvarium with total or partial absence of the brain and includes cases of craniorachischisis. These result from neural tube closure defects by the 4th week of pregnancy, or the 28th day after conception [1]. Compared with spina bifida (7%) and encephalocele (46%), anencephaly has significantly higher mortality rate (100%) [2], and therefore, infants with this disease generally die during or shortly after birth. For this reason, anencephaly is a worldwide public health burden [3, 4]. Although previous studies have suggested that anencephaly is a multistep process strictly controlled by genes and a host of environmental factors, recently, there has been unequivocal evidence that a large proportion of anencephaly can be prevented by providing folic acid before pregnancy [5]. 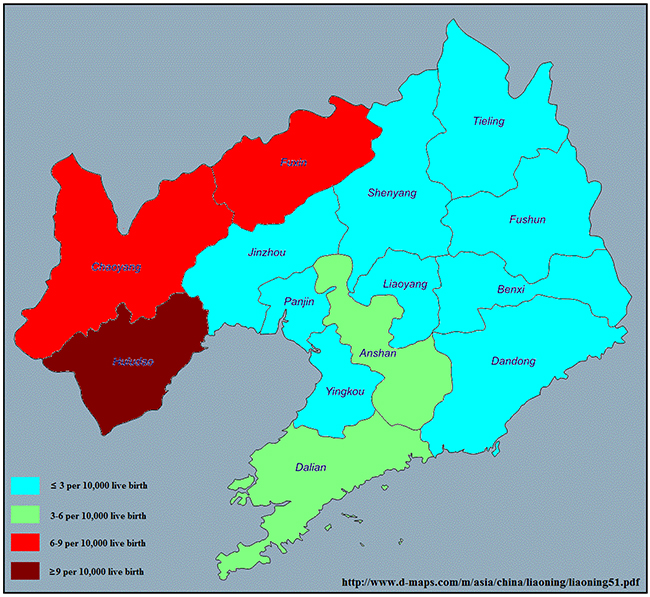 Figure 1: Prevalence of anencephaly of each city in Liaoning province from 2006–2015. www.d-maps.com/m/asia/china/liaoning/liaoning51.pdf.

Figure 2 shows the rate and time trend of anencephaly prevalence in Liaoning province between 2006 and 2015. Overall, the prevalence decreased from 7.40 to 1.84 per 10,000 live births, or 10.15% per year (95% confidence interval (CI): −13.60% – −6.56%) (Table 3). When stratifying by cities, decreasing trends were observed in all cities, but these results were only statistically significant in seven cites (Table 3). Notably, Benxi, Yingkou and Dalian contributed over one third of the decreasing trend of anencephaly prevalence in Liaoning province (Table 4). 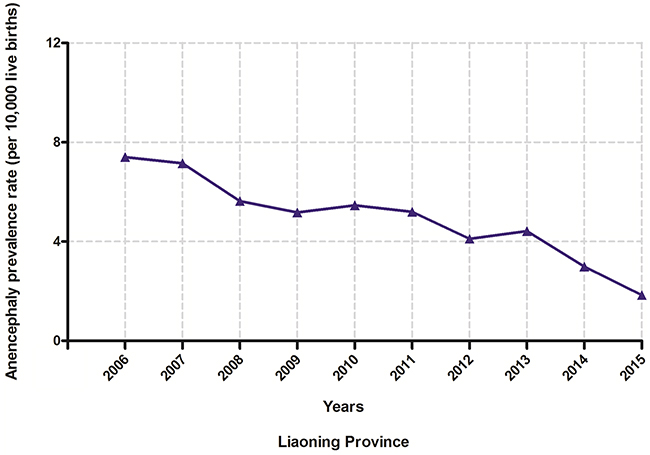 Table 3: Trends in anencephaly prevalence in each city of Liaoning from 2006 to 2015

* Anencephaly prevalence rates are expressed as the number per 10,000 live births.

† Percent change and average change between 2006 and 2015 was calculated based on the anencephaly prevalence rates.

Table 4: The relative contributions of each city in Liaoning province to the decreasing overall trend of anencephaly prevalence between 2006 and 2015

To the best of our knowledge, this population-based report is one of the limited studies from China that describes the time trend of anencephaly prevalence on the basis of the data from most recent decade. Between 2006 and 2015, the prevalence of anencephaly in Liaoning province in Northeast China significantly decreased from 7.40 to 1.84 per 10,000 live births. Moreover, decreasing trends were observed in all 14 cities, but not all of them showed statistically significant changes. Since a high prevalence was still found in some cities, further prevention efforts are warranted to reduce the risk of anencephaly in these areas.

Although termination of pregnancy for fetal anomaly has considerably reduced the prevalence of these anomalies in live births, it is certainly not an optimal solution for anencephaly, which is highly preventable with a readily available and low cost measure, namely, folic acid supplementation or food fortification [13]. Canada and the United States were the first countries to require mandatory fortification of enriched cereal grain products with 140 μg of folic acid per 100 g. Subsequently, many studies have observed a reduction in these anomalies after carrying out this policy [5]. As of the middle of 2012, 67 counties had fortified their wheat flour with folic acid (mandatory or voluntary programs) which affected over 2.2 billion people [5, 14]. Nevertheless, fortification has been uncommon in Asia and Europe, which might lead to the regional differences of prevalence rates [6]. In 2009, China initiated a nationwide folic acid supplementation program, and this program provides folic acid supplements free of charge to all women who have a rural registration as well as who plan to become pregnant [15]. In our study, we also noticed that the prevalence of anencephaly from 2012 to 2015 decreased dramatically from that of 2007 in the majority of these 14 cities, which may be partly attributable to the effects of this national policy. Nevertheless, not all of the 14 cities showed a statistically significant decreasing trend, suggesting that this phenomenon might be attributed to differences in the development of these cities and that fewer women take folic acid supplements before pregnancy in rural areas compared with urban areas in Northern China [16]. Therefore, policymakers are warranted to pay more attention to this issue in these cities and environments.

The present study had several strengths. The data used in this study were collected from a population-based birth defects registry with good quality control [17]. Of note, it included all 14 cities of Liaoning province over a relatively large time period (10 years), additionally, the most recent decade data up to 2015 comprehensively described the time trend and prevalence of anencephaly in Liaoning province. Despite these strengths, several limitations merit discussion. First, we had no access to the information regarding demographic factors of all live births in Liaoning province, which hindered our ability to evaluate the potential causes for the trends. Second, we could not get the prevalence of Liaoning province for any year prior to 2006. Hence, we failed to evaluate whether mandatory premarital physical check-ups, which became voluntary throughout the country on October 1, 2003, may have affected the time trend of anencephaly [4]. Additionally, under reporting could occur in the registry system, especially in developing countries. Third, the denominator of the prevalence of anencephaly was the total number of births (live births and still births at greater than or equal to 28 weeks of gestational age). Although inclusion of induced and spontaneous fetal deaths at less than 28 weeks of gestational age would more closely approximate the incidence of anencephaly, it is very impractical, as these pregnancy outcomes are often inaccurately counted compared to live and stillbirths [18]. Furthermore, compared with the number of live and stillbirths, the number of induced and spontaneous fetal deaths are small and unlikely to greatly affect these results [18]. Finally, the maximal diagnosis time for anencephaly cases was the seventh day after birth [17]. We did not include anencephaly cases confirmed after the seventh day in this study (n=4). Therefore, the calculated prevalence of anencephaly may be slightly lower than that which includes longer periods.

In summary, this population-based study provides recent and detailed evidence of the time trend and prevalence of anencephaly in Liaoning province between 2006 and 2015. The decreasing trend supports the notion that nationwide folic acid supplement programs may have been effective as a public health strategy to prevent anencephaly. However, it has been far effective when compared to mandatory folic acid fortification programs that have been carried out in developed countries. Notably, the prevalence of anencephaly remains high in some cities, which draws attention to the need to improve the efficiency of periconceptional folic acid supplementation. In the future, prevention efforts should be strengthened to reduce the risk of anencephaly in areas with a high prevalence rate.

Liaoning Women and Children’s Health Hospital is one of the sole obstetrical and gynecological hospitals for Liaoning province. It has also been a comprehensive care institution that has been in charge of women’s and children’s healthcare guidance. Data from 2006 to 2015 were retrieved from the maternal and child health certificate registry of Liaoning province, which is maintained by this hospital. Hospital-delivered live and stillbirth infants were included in this registry as the monitored subjects. This registry covers all 14 cities of the province (Shenyang, Dalian, Anshan, Fushun, Benxi, Dandong, Jinzhou, Yingkou, Fuxin, Liaoyang, Panjing, Tieling, Chaoyang and Huludao), with approximately 42 million inhabitants. The maximal diagnosis time for a congenital malformation case was the seventh day after birth [17].

The detailed procedures of data collection were described in previous report [17]. In brief, a “Birth Defects Register Form” was used to collect the related information on anencephalic infants. Once an anencephaly case was identified and confirmed at the monitored hospital, a trained obstetric or pediatric specialist would interview the mother of the infant to complete the aforementioned form. Subsequently, the “Birth Defects Register Form” was first submitted to the local maternal and child health facility and then to the provincial maternal and child health hospital, which is Liaoning Women and Children’s Health Hospital. For suspected anencephaly cases that were diagnosed through prenatal ultrasound scans, case ascertainment after termination or examination after the birth were requested. The data for these cases were reviewed and confirmed by a group of state-level experts in medical genetics and pediatrics [17].

According to the World Health Organization’s International Classification of Diseases, 10th Revision, anencephaly is defined as an absent calvarium with total or partial absence of the brain and includes cases of craniorachischisis [13]. All cases of anencephaly were included in our analysis. The birth prevalence of anencephaly was expressed per 10,000 live births. The denominator was based exclusively on the total number of live births which were obtained primarily from the Liaoning Women and Children’s Health Hospital. Through this process we identified 1600 cases; the total number of live births in the study window was 3,248,954.

Data quality control was described in detail in a previous report [17]. Briefly, to ensure high quality data, the program manual dictates that diagnosis, data collection, data checking and medical records were verified by the expert group at each level. In addition, an independent retrospective survey was organized by the experts to find deficiencies and inaccuracies in the data [17]. This study was conducted in compliance with local and national regulations and was approved by the Institutional Review Board of Liaoning Women and Children’s Health Hospital.

Anencephaly prevalence rates were calculated for nine 1-year time intervals from 2006 to 2015. To specifically look at time trends, a Poisson regression model was used to find the line of best fit for anencephaly prevalence by year, with year entered into the model as a continuous independent variable [19–22]. We used the method recommended by the National Cancer Institute to calculate the 95%CI of the average change [23]. The relative contributions for rate changes, which are used to determine the contributions individual cities made to the overall trend were calculated [24]. All analyses were conducted using SPSS for Windows (version 23; SPSS Inc., Chicago, IL, USA). P-values less than 0.05 were considered statistically significant.