We performed an updated meta-analysis to assess the role of the ε2/ε3/ε4 alleles of Apolipoprotein E gene (APOE) in frontotemporal lobar degeneration (FTLD). The relevant articles were retrieved from PubMed, CENTRAL, EMBASE and Web of Science databases, and 51 eligible case-control studies with 5123 cases and 20566 controls were selected after screening according to inclusion and exclusion criteria. Our analysis demonstrated that APOE ε4 was associated with increased FTLD risk in all genetic models (ε4 vs. ε3 allele, ε4 vs. ε2 allele, ε4 vs. ε2+ε3+ε4 allele, ε4 vs. ε2+ε3+ε4 carrier, ε4ε4 vs. ε3ε3, ε3ε4 vs. ε3ε3, ε3ε4+ε4ε4 vs. ε3ε3, ε4ε4 vs. ε3ε3+ε3ε4, all P < 0.01, odds ratio [OR] > 1). Subgroup analysis revealed significant association between APOE ε4 and FTLD (P < 0.01, OR > 1) for the Caucasian, Italian, population based (PB), P > 0.05 value of the Hardy-Weinberg Equilibrium (HWE), Newcastle-Ottawa scale score > 6, and behavioral variant frontotemporal dementia (bvFTD) subgroups. However, there was no significant association between the APOE ε2 allele and FTLD (P > 0.05) in most genetic models and sub-group analyses. Begg’s and Egger’s tests also revealed no publication bias, and sensitivity analysis showed that our data analysis was robust. Thus our meta-analyses suggest that APOE ε4 is a genetic risk factor in patients with FTLD.

Human Apolipoprotein E (APOE) gene that is located on chromosome 19 is involved in lipid homeostasis and is implicated in cardiovascular disease [7, 8]. Altered structure and function of ApoE protein is associated with neurodegenerative disorders such as Alzheimer’s disease (AD) [8]. APOE gene has three common alleles (ε2, ε3 and ε4) and six related genotypes (ε3ε3, ε3ε2, ε2ε2, ε3ε4, ε4ε4, and ε2ε4) and distinct pathological roles have been attributed to all 3 alleles of APOE, namely, ε2, ε3, and ε4 [8]. The conclusions of various studies that have investigated the role of APOE polymorphism in FTLD have been inconsistent and contradictory. For instance, APOE ε4 was associated with increased FTLD risk in the Dutch population [9]. However, a negative association was reported between APOE polymorphism and FTLD risk in German patients [10]. In addition, genome wide association studies (GWAS) data of FTLD did not confirm a positive association with the APOE gene [11, 12].

So far, only two meta-analyses have reported on the relationship between APOE polymorphism and susceptibility to FTLD [13, 14]. Since many new studies have published on since 2013, we conducted an updated meta-analysis to reassess this association by systematically retrieving, screening and enrolling the available case-control studies to determine the association between APOE polymorphism and FTLD risk.

Selection criteria for eligible studies in the meta-analysis 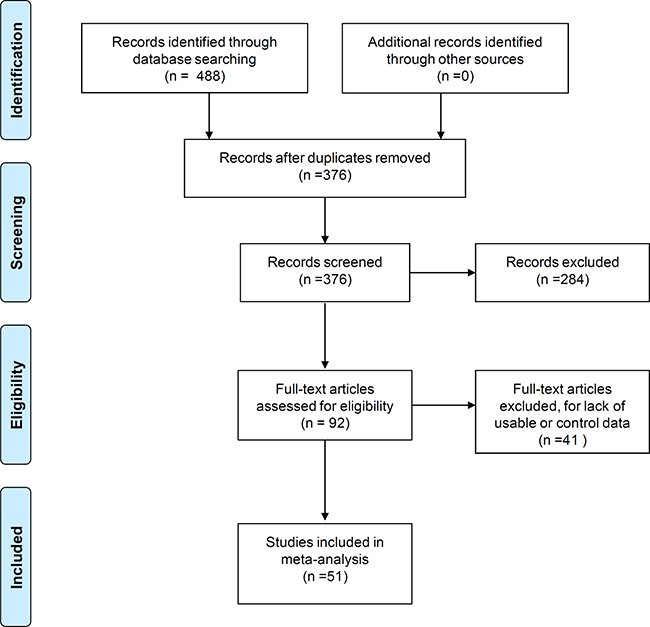 Table 1: Meta-analysis for the association between APOE polymorphism and FTLD risks 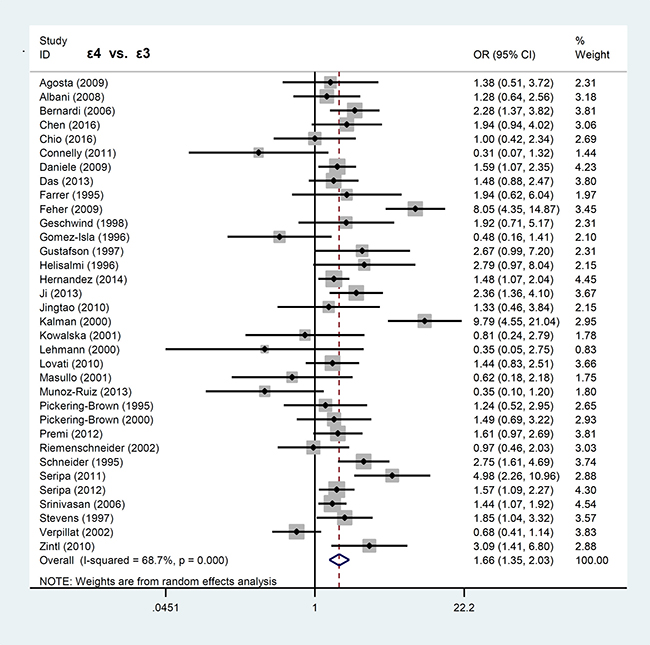 Figure 2: Forest plot of meta-analysis of the ε4 vs. ε3 allele model. 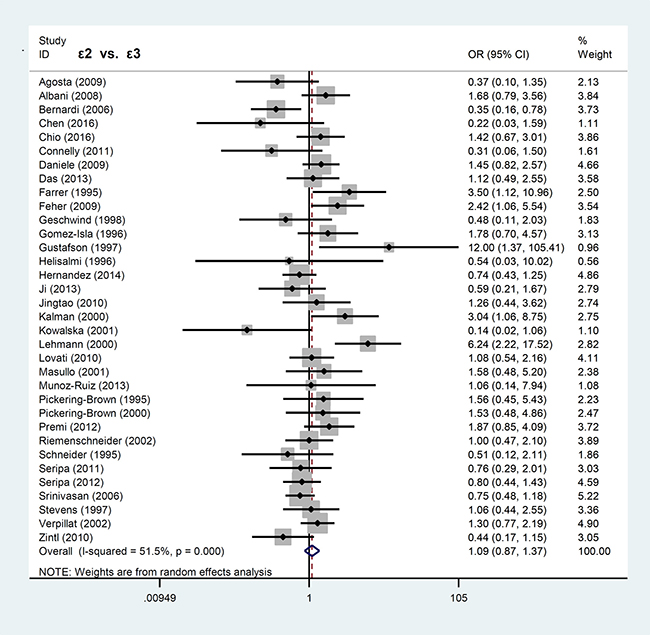 Figure 3: Forest plot of meta-analysis of the ε2 vs. ε3 allele model. 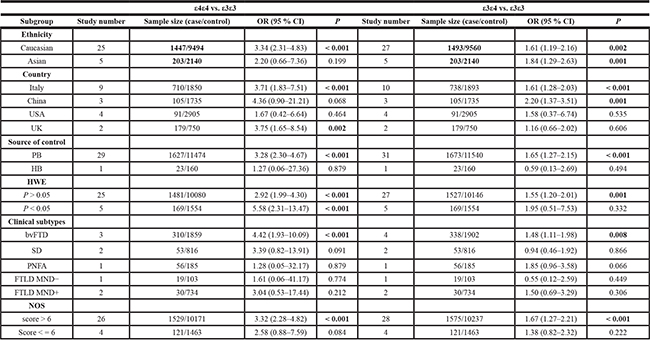 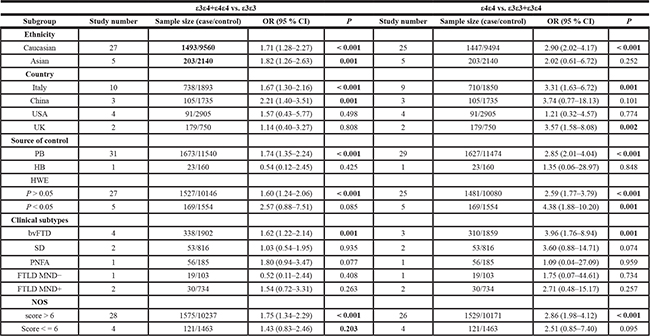 In addition, stratified analysis of clinical subtypes (bvFTD, SD, PNFA, FTLD with or without motor neuron disease) showed that all genetic models were associated with increased bvFTD risk (Tables 2–4, Supplementary Table 2, all P < 0.01, OR > 1). This suggested that APOE ε4 was a risk factor for bvFTD.

In regard to APOE ε2, no significant differences were observed in the subgroup analyses for almost all genetic models (Supplementary Tables 2–5, P > 0.05). These findings further confirmed the negative genetic association between APOE ε2 and FTLD risks.

In addition, Begg’s test and Egger’s test analyses suggested absence of publication bias (Supplementary Table 6, all P value > 0.1). Begg’s funnel plot of publication bias for ε4 vs. ε3 and ε2 vs. ε3 allele models are shown in Figure 4. Furthermore, sensitivity analysis was performed to evaluate the reliability of data and strengthen the validity of genetic relationship. We observed that similar pooled ORs were obtained when individual studies were omitted one by one, thereby indicating that the original statistical data were genuine and robust (Figure 5). 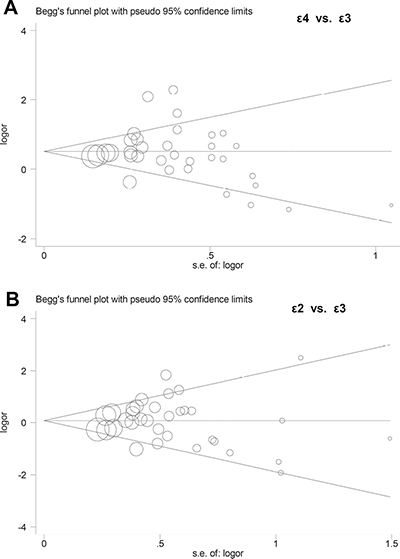 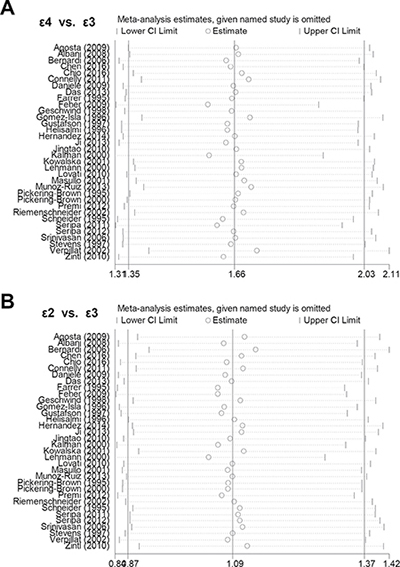 In 2002, Verpillat et al. [13] carried out a meta-analysis of 11 studies, and reported that APOE ε2 was associated with an increased risk of FTLD in the Caucasian population. However, in 2013, another meta-analysis based on 28 studies by Rubino et al. [14] in 2013 showed that FTLD susceptibility was associated with APOE ε4, but not ε2. These contradictory conclusions may have been a result of small and different sample sizes.

Recently, mutations in valosin-containing protein (VCP), progranulin (GRN), and the microtubule-associated protein tau (MAPT) genes were reported by us in 38 Chinese FTLD cases [61]. Further, our analysis of 62 Chinese FTLD patients and 381 sex- and age-matched elderly controls demonstrated significant association between FTLD susceptibility and APOE ε4, but not ε2 [36]. However, both conclusions were limited by small sample sizes. Therefore, to comprehensively assess the factors that are associated with FTLD, we enrolled 51 case-control studies and conducted an updated meta-analysis that also included subtype analyses of factors such as country, ethnicity, source of controls and clinical subtypes. Our data demonstrated a strong positive association between APOE ε4 and FTLD risks in the allele, homozygote, heterozygote, dominant recessive and carrier models. However, no statistically correlation was observed between APOE ε2 and FTLD risks, thereby confirming our previous finding [36] and partly agreeing with the results reported by Verpillat et al. [13].

FTLD and Alzheimer’s disease (AD) are main contributors to dementia [62]. The molecular mechanisms underlying the role of APOE ε4 in the pathogenesis of FTLD and AD are unclear. APOE ε4 reduced the clearance of beta-amyloid (Aβ) that resulted in enhanced Aβ deposition within the neurons in the AD mouse model [63, 64]. APOE ε4 was also associated with Aβ deposition in the brain of a FTLD case [65]. Hence, the link between APOE ε4 and Aβ deposition merits further investigation. In addition, APOE ε4 enhanced phosphorylation of tau protein in brains of transgenic mice [66]. Since FTLD-tau is a neuropathological subtype of FTLD [4, 67], abnormal Tau phosphorylation may be partly involved in the pathogenesis of FTLD by APOE ε4.

There are several limitations in this meta-analysis that need to be highlighted. Firstly, out of 51 case-control studies included in our pooled analysis, 19 studies [5, 6, 17, 18, 20, 21, 27, 35, 43, 44, 46, 47, 49, 50, 54, 55, 57–59] contained only allele or carrier data and did not provide information regarding the specific genotype frequencies of ε3ε4 and ε3ε2 that could have weakened the statistical output. Secondly, genetic heterogeneity existed between studies for majority of comparisons because of hospital based controls, lack of the pathology or autopsy confirmed FTLD diagnoses, clinical complexity, and pathological heterogeneity. Although poor quality studies were excluded based on NOS analysis, six medium quality articles [26, 28, 32, 39, 46, 47] were still included in the analysis. Hence, more high quality studies with large sample sizes are required to avoid false positives. Thirdly, our meta-analysis included only five articles based on Asian populations [22, 26, 36, 37, 39] compared to 46 articles based on Caucasian populations [5, 6, 9, 10, 13, 15–21, 23–25, 27–35, 38, 40–60]. Among these were 15 articles based on Italian populations [5, 6, 15–17, 19, 20, 23, 25, 41, 42, 48, 52, 53, 59]. In addition, only full-text articles in Chinese or English were collected for this meta-analysis. All these factors might lead to selection bias. Fourthly, bvFTD, the most frequent clinical subtype of FTLD is a clinical syndrome characterized by progressive changes of personality, abnormalities of social behavior and cognitive function, and lack of emotional response [4, 68]. Our subgroup analysis of bvFTD contained seven articles [6, 15, 21, 22, 53, 54, 56] that showed significant association with APOE ε4 . It is probable that APOE ε4 may serve as a disease modifier of bvFTD. However, this result needs to be verified since our analysis was based on a small sample size. Similarly, only four articles for PNFA [6, 21, 48, 54] and five articles for SD [6, 21, 22, 48, 56] were available and therefore the role of APOE polymorphisms in PNFA and SD could not be determined conclusively. This was true of the subgroup analysis of FTLD with or without MND. Finally, in view of the unclear etiology of FTLD, more factors, including age at onset, male/female, pathological criteria, clinical presentation, living habits, the combination of APOE and other related genes (e.g. VCP, GRN, MAPT) should be considered in future meta-analysis. Also, pathogenesis of APOE ε4 in the memory function, behavioral symptoms and brain morphological changes in FTLD-spectrum disease should be investigated.

We searched four databases, including PubMed, CENTRAL, EMBASE and WOS until February 27th, 2017 with specific search terms listed in Supplementary Table 7 and identified 488 records. After removing the duplicates by endnote software (Thomson Reuters), the remaining 376 records were screened according to our inclusion/exclusion criteria. We excluded the records of case reports, posters, books, reviews, meeting abstracts, meta-analysis, and the articles with non-FTLD, non-ApoE, non-clinical, non-mutation data. The remaining 92 full-text articles were then assessed to identify 51 eligible case-control studies while removing articles that lacked control or other usable data for this meta-analysis. The PRISMA was used in this study [69]. The PRISMA 2009 checklist is shown in Supplementary Table 8.

Three authors independently assessed the methodological quality of the selected case-control studies using the Newcastle-Ottawa Scale (NOS) (http://www.ohri.ca/programs/clinical_epidemiology/oxford.asp) and extracted the relevant data. Studies with a NOS score > 6 were considered high quality, whereas studies with NOS score < 5 were considered poor and removed from the included studies. Whenever there was a disagreement, it was resolved by discussion among the three authors. The following information was collected from all the selected studies and summarized: first author, year of publication, country, ethnicity, genotype distributions (ε3ε3, ε3ε2, ε2ε2, ε3ε4, ε4ε4, and ε2ε4) in case group and control group, clinical subtypes of case, source of control, and genotyping assay. The first or the corresponding author was contacted by email whenever relevant data was not available.

Stata/SE 12.0 software (StataCorp, USA) was used for Mantel-Haenszel statistic, Q statistic and I2 tests from P values, pooled ORs, and 95% CIs. P<0.05 was considered statistically significant. Six genetic models, namely allele (ε4 vs. ε3; ε2 vs. ε3; ε4 vs. ε2; ε4 vs. ε2+ε3+ε4, ε2 vs. ε2+ε3+ε4), homozygote (ε4ε4 vs. ε3ε3, ε2ε2 vs. ε3ε3), heterozygote (ε3ε4 vs. ε3ε3, ε3ε2 vs. ε3ε3), dominant (ε3ε4+ε4ε4 vs. ε3ε3, ε3ε2+ε2ε2 vs. ε3ε3), recessive (ε4ε4 vs. ε3ε3+ε3ε4, ε2ε2 vs. ε3ε3+ε3ε2) or carrier (ε4 vs. ε2+ε3+ε4 carrier; ε2 vs. ε2+ε3+ε4 carrier) were used and Hardy-Weinberg Equilibrium (HWE) was calculated by chi-squared test. P values of Q statistic >0.1 or I2 values ≤ 25% indicated heterogeneity between studies and the fixed-effect model was used for analysis. If not, the random-effect model was used. Subgroup analyses were performed based on ethnicity, country, source of control, clinical subtypes, HWE, and NOS score. Furthermore, Begg’s funnel plot (Begg’s test) and Egger’s publication bias plot (Egger’s test) was used to evaluate the potential publication bias. The P value of Begg’s test and Egger’s test > 0.05 was regarded as the absence of publication bias. Sensitivity analysis was also performed to evaluate the stability of statistical results.

23. Chio A, Brunetti M, Barberis M, Iazzolino B, Montuschi A, Ilardi A, Cammarosano S, Canosa A, Moglia C, Calvo A. The Role of APOE in the Occurrence of Frontotemporal Dementia in Amyotrophic Lateral Sclerosis. JAMA Neurol. 2016; 73:425–430.