Background: To investigate the predictive values of preoperative and postoperative serum CA19-9 levels on survival and other prognostic factors including early recurrence in patients with resectable hilar cholangiocarcinoma.

Materials and Methods: Ninety-eight patients who had undergone curative surgery for hilar cholangiocarcinoma between 1995 and 2014 in our institution were selected for the study. The correlations of preoperative and postoperative serum CA19-9 levels on the basis of different cut-off points with survival and various tumor factors were retrospectively analyzed with univariate and multivariate methods.

Hilar cholangiocarcinoma (HCCA) is featured by advanced tumor biology, low surgical resectability, high recurrence and poor survival outcome [1–4]. On account of the absence of particular related symptoms in early stage, most patients with HCCA manifest locally advanced disease and unresectable when diagnosed [5]. With the progress of surgical techniques, more and more patients are eligible for curative surgery [6], which furnishes the only possibility of long term survival [7, 8]. However, the prognosis of HCCA is still deplorable [9–11].

Table 1 outlined the fundamental clinicopathological features of the patients. The median preoperative total bilirubin level after biliary drainage was 23.9 umol/l, and the corresponding median preoperative CA19-9 level was 129.6 U/ml. The median postoperative CA19-9 level was 36.1 U/ml. All patients were operated on with curative surgery with postoperative R0 (87 cases) and R1 (11 cases) margin status. The postoperative complications after curative surgery were detected in 22 patients, which includes bile leakage (8 cases), lung infection (4 cases), hemorrhage (3 cases), peritoneal cavity infection (3 cases), hepatic failure (2 cases), sepsis (1 case), and acute cardiac failure (1 case). No postoperative deaths were detected among the 98 patients, and all of the patients were well followed-up. We examined the early recurrence in 28 of the 98 patients at the first year after surgery, of which local recurrence (n = 13) and liver metastasis (n = 8) were most commonly to see. The median overall survival time of the 98 patients after curative surgery was 36.8 months with a 1-, 3-, 5-year survival rate of 83%, 51%, and 30% respectively. 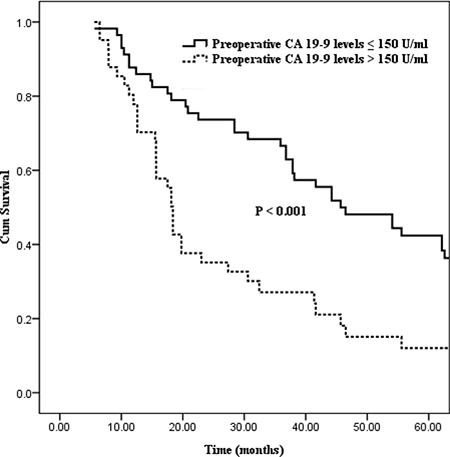 Table 2: Differences of overall survival in two groups divided on the basis of six CA19-9 cut-off points for 98 patients treated by curative resection for hilar cholangiocarcinoma 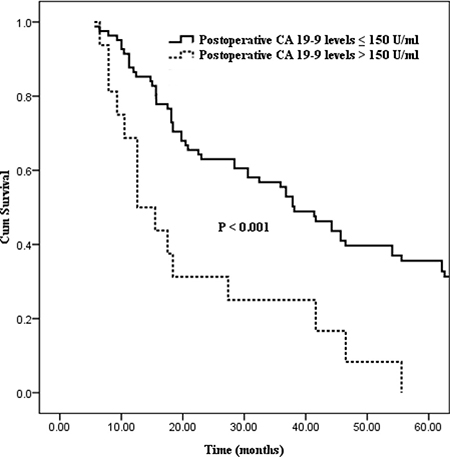 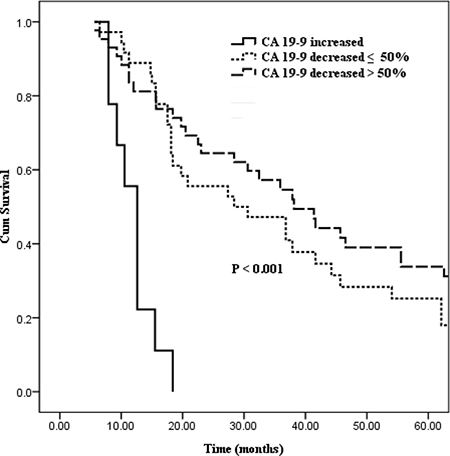 Based on the retrospective nature of our current study with only 98 patients, future prospective analysis with more patient numbers or multi-center cooperation is undoubtedly needed to better clarify the prognostic effect of preoperative and postoperative CA19-9 levels on survival and various tumor factors, so as to better guide the treatment and predict survival.

From January 1995 to December 2014, a total of 98 patients diagnosed with HCCA who underwent curative surgery (including R0 and R1 resection) and with exploitable CA19-9 levels from West China Hospital of Sichuan University were retrospectively included. Patients with R2 resection and palliative surgery were excluded. Both patients with hyperbilirubinemia (preoperative total bilirubin levels > 34.2 umol/l after biliary drainage) and those with CA19-9 nonsecretory (preoperative serum CA19-9 levels < 5 U/ml) were also excluded. None of the included patients accepted any anti-cancer treatment prior to surgery. A diagnosis of hilar bile duct adenocarcinoma was acknowledged histologically in all cases.

Patients were strictly monitored at outpatient department after surgery. Regular laboratory tests such as liver functions, and tumor markers were conducted and abdominal ultrasound was routinely proceed every 2–3 months during the first year, then 3–6 months yearly thereafter. Computed tomography scan of abdomen or magnetic resonance imaging test was further adopted if patients were suspected as tumor recurrence.

Patient characteristics were conveyed using frequency or descriptive analysis. The Kaplan-Meier analysis and log-rank test were adopted to analyze the difference in overall survival between groups divided based on the six cut-off points of preoperative and postoperative CA19-9 levels listed above. Preoperative to postoperative CA19-9 changes on survival were simultaneously analyzed using the same methods. The CA19-9 cut-off point showing the strongest significance was further examined using the univariate and multivariate logistic regression models, and many preoperative and postoperative factors including early recurrence were analyzed so as to identify the independent factors associated with CA19-9 levels. The P value < 0.05 was deemed as significant. The statistical analysis was outlined using the SPSS version16.0 (SPSS Inc. Chicago, IL, USA).