Background: Femoral head collapse is a key reference point for determining a treatment regimen of femoral head osteonecrosis. However, there are no effective preventive measures and the efficacy of hip-preserving surgery is unsatisfactory due to the unclear mechanism of collapse. This study aimed to identify and validate miRNAs differentially expressed in collapse and non-collapse areas of the osteonecrotic femoral head, and to predict the target genes and pathways of these miRNAs.

Materials and Methods: Femoral heads of three patients (2 males and 1 female) treated by total hip arthroplasty surgery for steroid-induced femoral head osteonecrosis were selected based on inclusion and exclusion criteria. Bone tissue samples were obtained from the collapse area (T), non-collapse area (W), and normal area (Z) according to the anatomical structure of osteonecrotic femoral heads. Total RNA was extracted from the samples and the microarray chip was scanned. miRNAs showing differential expressions of more than 1.5-fold were selected and was validated by RT-PCR. TargetScan, mirBase and miRanda bioinformatics software was used to predict target genes and identify possible pathways involving these genes.

Conclusions: miR-195-5p showed the most significant difference in the collapse area of osteonecrotic femoral heads, suggesting that collapse may be related to the downregulation of miR-195-5p.

Table 1: Compared with the W1 , the number of differential expression of miRNAs (fold change > 1.5) in T1

Table 2: Compared with the W2 , the number of differential expression of miRNAs (fold change > 1.5) in T2

Table 3: Compared with the W3 , the number of differential expression of miRNAs (fold change >1.5) in T3

The following U6 primers were used for RT-PCR:F: 5′GCTTCGGCAGCACATAT ACTAAAAT3′, R: 5′CGCTTCACGAATTTGCGTGT CAT3′.The primer sequences of hsa-miR-195-5p were: GSP: 5′GGGGTAGCAGCACAGAAAT3′, R: 5′CAGTGCGTGTCGTGGAGT3′(GSP is a specific primer for miRNA, while R is a primer that matches the RT primer). The RT-PCR expression level of hsa-miR-195-5p was significantly lower in the collapse area (T1 T2 T3)than in the non-collapse area (W1 W2 W3) and normal area (Z1 Z2 Z3) . (Table 4) Comparison of the results from RT-PCR and the microarray data also indicated that hsa-miR-195-5p expression was downregulated.Amplification and melting curves were obtained (Figure 2).

157 genes were perdicted as the target gene of hsa-miR-195-5p (Figures 3, 4). GO analysis and KEGG Pathway analysis were showed that pathway in cancer is significant (Figures 5, 6). 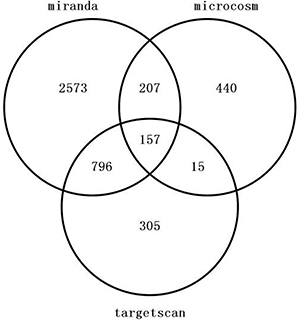 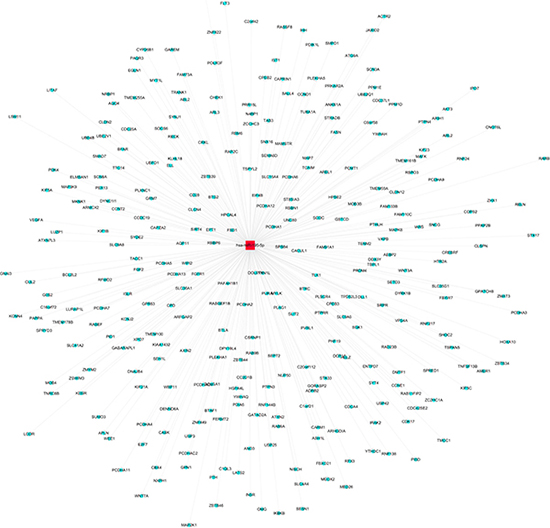 Figure 5: GO analysis of hsa-miR-195-5p: 5A was biological process, 5B was cellular component and 5C was molecular function. 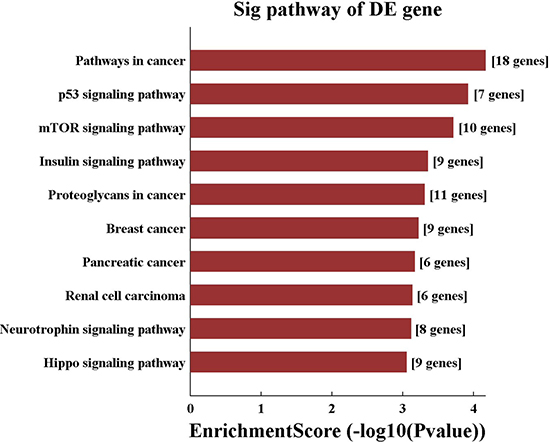 Previous studies have suggested that collapse occurs because of an imbalance between bone resorption and bone formation after femoral head osteonecrosis, resulting in femoral heads with reduced structural strength that are unable to bear external forces. The studies have also suggested that mechanical support and adjustment of bone cell metabolism can prevent collapse [25]. To comprehensively understand the biological behavior of osteocytes, an increasing number of studies have focused on the differential expression of miRNAs associated with osteonecrosis of the femoral head [23–24, 26–28]. We evaluated whether the decrease in structural strength was associated with the differential expression of relevant miRNAs, which may lead to faster apoptosis and an increased imbalance with bone metabolism. We found that in the osteonecrotic region, hsa-miR-195-5p was down-regulated in the collapse area compared to in the non-collapsed area. This is the first study examining the relationship between miRNA and femoral head collapse.

It has been reported that miR-195-5p is a tumor-suppressor gene that mainly suppresses cell proliferation and invasion and is down regulated in cancer patients [29–34]. This gene inhibits hepatocellular carcinoma by regulating PHF19 [30], regulates rectal cancer through CDK8, regulates osteosarcoma by inhibiting NKD1 [33], regulates prostate cancer through Fra-1 or RPS6KB1 [34]. Based on these results, we hypothesized that the mechanism of collapse involves down-regulation of miR-195-5p, which disrupts the proliferation of normal osteoblasts and accelerates cell apoptosis. This leads to a further decrease in structural strength within the femoral head and failure to support external forces, eventually resulting in collapse. Future studies should examine methods of increasing the expression of miR-195-5p to treat cancer and the collapse of femoral head osteonecrosis.

The limitations of this study were as follows: firstly, small sample size, but with reproducibility; secondly, target genes and pathways were only predicted and require further validation; In addition, whether collapse leads to miRNA changes or miRNA changes lead to collapse remains unknown. These factors exhibit a mutually causal relationship. In future studies, we will evaluate the genetic pathways of the collapse-associated differential miRNAs and gene editing technology to prevent and treat collapse.

Three patients were randomly selected from the hospital system in our department. Inclusion criteria were as follows: 1. diagnosed with steroid-induced femoral head osteonecrosis (a clear history of hormone use); 2. diagnosed with ACRO III/IV stage based on X-ray by 3 doctors; and 3. the surgeon and patient decided to perform the total hip joint replacement surgery. Exclusion criteria were as follows: 1. The cause of femoral head osteonecrosis was not clear or involved multiple factors; 2. Severe liver and kidney failure in which the patient could not tolerate surgery; And 3. Surgical strategy in which patient consent was not obtained. Informed consent was obtained from all patients and the ethical review committee of our hospital. According to the inclusion and exclusion criteria, three patients were selected. There were 2 males, one of whom at the age of 30 years used hormones to treat thrombocytopenic purpura, while the other, at the age of 46 years, used hormones to treat skin disease. At the age of 20 years, the female patient used hormones to treat systemic lupus erythematosus.

After surgery, femoral heads were removed and cleaned with saline. Three bone tissues (normal area, collapse area, and non-collapse area) were taken from femoral heads (Figure 7). Two doctors identified these tissues, and a total of 9 samples were obtained (T1 T2 T3, W1 W2 W3, and Z1 Z2 Z3). Bone tissues were immediately stored in liquid nitrogen and ground into powder (≥ 100 mg) in liquid nitrogen. The powder was transferred to an microcentrifuge tube, mixed with 1 mL Trizol, and stored at −70°C until use.

After extraction, RNA samples underwent quality control and miRNA was labeled using miRCURYTM Array Power Labeling kit (Cat #208032-A, Exiqon). The detailed steps are described as follows:One microgram RNA sample was added to 2 μL water, and then 1 μL CIP buffer and CIP enzyme (Exiqon) were added to the RNA sample solution, and the mixture solution was incubated at 37°C for 30 min. The reaction in the sample solution was terminated at 95°C for 5 min, and then 3 μL labeling buffer, 1.5μL fluorescent label (Hy3™), 2.0 μL DMSO, and 2.0 μL labeling enzyme were added and the solution was incubated at 16°C for 1 h.The reaction in the samples was terminated at 65°C for 15 min.

GenePix Pro V6.0 was utilized to read the microarray scan images and the probe signals were selected. The median was taken and combined for the same probes. Probes >= 30.0 for the samples were kept and the median was standardized in all microarray chips. (Figure 8) miRNAs showing differential expressions of more than 1.5-fold were selected [24].

Figure 8: Box plot: after normalization, the median line of 9 samples were equal.

cDNA synthesis of RNA samples [23]. 20 μL of RT reaction mixture was prepared, then all cDNA samples were separately set up in the RT-PCR System (Applied Biosystems); The solution was mixed up to 8 μL and centrifuged at 5000 rpm for a short period.

The RT-PCR reaction was performed for the target miRNA in all samples and the internal reference gene (U6) separately. In Table 1, data analysis was performed using 2-ΔΔCT method. SPSS 20.0 (SPSS Inc., Chicago, Ill., USA) was employed for statistical analysis of the data.

Predication of target gene of miR-195-5p

TargetScan, mirBase and miRanda bioinformatics software were used to predict target genes. Gene Ontology(GO, http://www.geneontology.org/) analysis and Kyoto Encyclopedia of Genes and Genomes(KEGG, www.genome.jp/kegg/) pathway analysis were done respectively. The GO project covers three domains: Biological Process, Cellular Component and Molecular Function. Fisher’s exact test is used to find if there is more overlap between the differential expression (DE) list and the GO annotation list than would be expected by chance. The p-value denotes the significance of GO terms enrichment in the DE genes. The lower the p-value, the more significant the GO Term (p-value <= 0.05 ).Pathway analysis is a functional analysis mapping genes to KEGG pathways. The p-value denotes the significance of the Pathway correlated to the conditions. Lower the p-value, more significant is the Pathway(p-value cut-off is 0.05).

This research was supported by grants from the National Natural Science Foundation of China (No. 81373652).