The effect of postmastectomy radiotherapy (PMRT) on T1-2 breast cancer patients with 1-3 positive axillary lymph nodes is controversial up to now. The purpose of this study was to evaluate the impact of postmastectomy radiotherapy for these patients. The prognostic factor effecting locoregional free-survival (LRFS) was also analyzed. In the retrospective clinical data of 1674 eligible patients, survival analysis was performed using the method of Kaplan-Meier and the log-rank test. Cox regression analysis was applied to identify the significant prognostic factors. We found PMRT increased 5-year LRFS (p=0.003), but could not improve 5-year disease-free survival or overall survival statistically. For patients without PMRT, multivariate analysis revealed that age, lymph node ratio and molecule subtype were risk factors effecting LRFS. To further analyze the role of PMRT, we grouped all the patients into low risk group (0 or 1 risk factor) and high risk group (2 or 3 risk factors) depending on these risk factors. We found that in low-risk group, PMRT increased only 5-year LRFS (p=0.012). However, in high-risk group, PMRT increased both 5-year LRFS (p=0.005) and 5-year disease-free survival (p=0.033), but could not improve 5-year overall survival statistically. Thus, these data provide the evidence that PMRT could improve LRFS for T1-2 breast cancer patients with 1-3 positive axillary lymph nodes. Additionally, PMRT could improve LRFS and disease-free survival for high risk patients. Age, lymph node ratio and molecule subtype were high risk factors effecting LRFS in our study.

Breast cancer is one of the most common diagnosed cancers and accounts for 15% of cancer-related death among women in worldwide, with an estimated 1.7 million cases and 521,900 deaths [1]. However, locoregional recurrence (LRR) is still a major obstacle of clinical treatments for prevention of the cancer and outcome after mastectomy [2]. Almost 30% patients present with disease recurrence during follow-up [3].

Several randomized controlled clinical trials found that postmastectomy radiotherapy (PMRT) can improve loco-regional control and overall survival (OS) among patients with advanced T3/T4 primary cancer or with four or more positive lymph nodes [4-6]. So PMRT has been a standard treatment for these patients. PMRT has been also suggested for patients with T1-2 and one to three positive lymph nodes as beneficial but not been widely adopted. A report from the Early Breast Cancer Trialist’s Collaborative Group (EBCTCG) showed that patients who received PMRT have a lower 15-year mortality [7]. However, the EBCTCG study was not a random trial. The European Society for Medical Oncology guidelines did not strongly recommend PMRT for all the patients but only recommend for these patients with high risk factors associated with LRR [8]. A recent report from Japan showed that PMRT did not show significant value [9]. Therefore, there is still controversy about the role of PMRT for these patients and the impact of PMRT should be noticed. 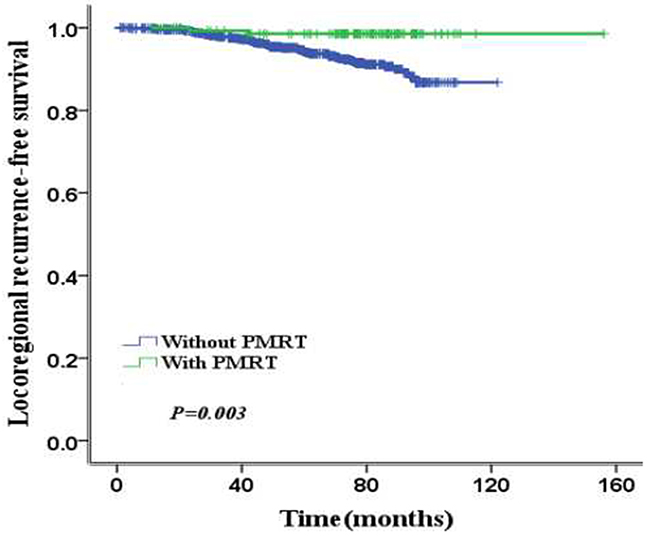 Figure 1: The 5-year LRFS according to PMRT.

Table 4: Effect of PMRT on survival 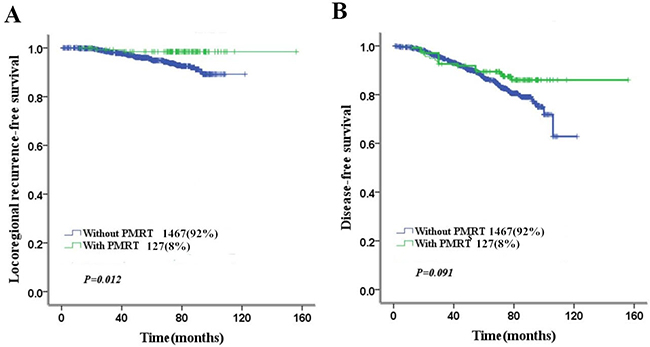 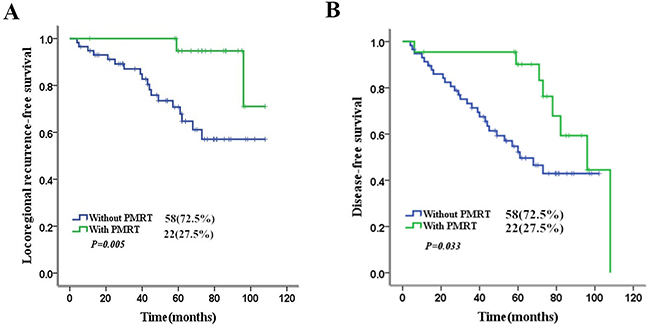 The risk factor of local failure for T1-2 breast cancer patients with 1 to 3 positive ALNs was not clear now by many studies including young age, tumor size, premenopausal status, the number of lymph nodes, molecule subtype, lymphatic vascular invasion (LVI) and LNR. Five National Surgical Adjuvant Breast and Bowel Project Randomized Clinical Trials reported age, tumor size, premenopausal status, the number of lymph nodes were risk factors of LRFS [17]. Additionally, Yang et.al reported ER-negative status and existence of LVI were statistically significance risk factors for locoregional failure [18]. Truong et al. reported LNR>0.20 was closely related to local-regional failure [19]. Additionally, according to a recent study, the risk factors were invasive ductal carcinoma, tumor diameter>2 cm, three lymph nodes, and stage 2b for 1-3 ALNs patients. And these patients can benefit from PMRT [20]. Furthermore, a study from an international breast cancer study group reported that age, PVI and 0-7 uninvolved regional nodes were risk factor of LRR for patients with 1-3 positive ALNs [21]. In our study, age, molecule subtype and LNR were risk factors of LRR as same as previous study. The vessel invasion was not a risk factor which was different from previous study. The reason may be the heterogeneity of the breast cancer and the different period time of follow and the risk factors still need further significant research.

Quantification of the Estrogen receptor (ER), progesterone receptor (PR), human epidermal growth factor receptor2 (HER2) and Ki-67 protein expression was helpful to make clinical decision and predict the outcome [22]. In a recent report of Tianjin China, 1369 T1-2 patients with 1-3 ALNs were included. The molecule subtype was a factor affecting LRR. Among the patients, the Luminal A, Luminal B, Her-2 positive and Triple negative subgroups account for 33.0%, 42.9 %, 11.9 % and 12.2 %, respectively. Molecule subtype was associated with LRR by single and multiple variable analysis (p<0.001). The rate of LRR in Her-2 Positive and Triple-negative subtypes were higher (23.3% and 22.2 %) than the Luminal A and Luminal B subtypes (11.5% and 15.0 %) [23]. In our study, molecular subtypes was also a significant predictor for LRFS and Her-2 positive subtype had higher rate of LRR (p=0.001). By contrast, a recent report of Europe, ER-positive breast cancer patients had a lower local recurrence than ER-negative patients (9.9% vs. 11.5%, p = 0.01) in the first 5 years. After 5 years, ER-positive patients showed higher rate (p<0.001) [24]. Furthermore in the report of Shih-Fan Lai, triple-negative breast cancer patients had a higher rate of LRR [25]. Because of the molecule subtype is closely associated with patients’ therapeutic results, survival and prognosis, the option of treatment was often according to different molecular subtypes. However, the quantitative influence of subtype on LRR is still in dispute and needs large scale randomized studies [26].

There are some limitations in our study. Firstly, our study was a retrospective single-center study. And the quantity of patients who underwent PMRT was underrepresented in our study. Furthermore, most patients did not receive trastuzumab treatment during that period of time which was different now.

We performed a retrospective clinical research include 3364 T1-2 and 1–3 positive ALNs breast cancer patients surgically treated from January2006 to December 2011 at the Harbin Medical University Cancer Hospital. 1674 patients met the criteria and included in our study (Figure 5). The inclusion criteria were unilateral breast cancer female patients, without distant metastasis at first diagnosis and breast conserving patients. This review was approved by our institutional review board. All patients had written permission storage medical information in our hospital database and for research use. In our hospital, the use of PMRT for 1-3 positive lymph nodes was determined by their physicians according to risk factors (e.g. <40 years of age, ratio>0.2, or her-2 rich subtype). The details are shown in Table 1. 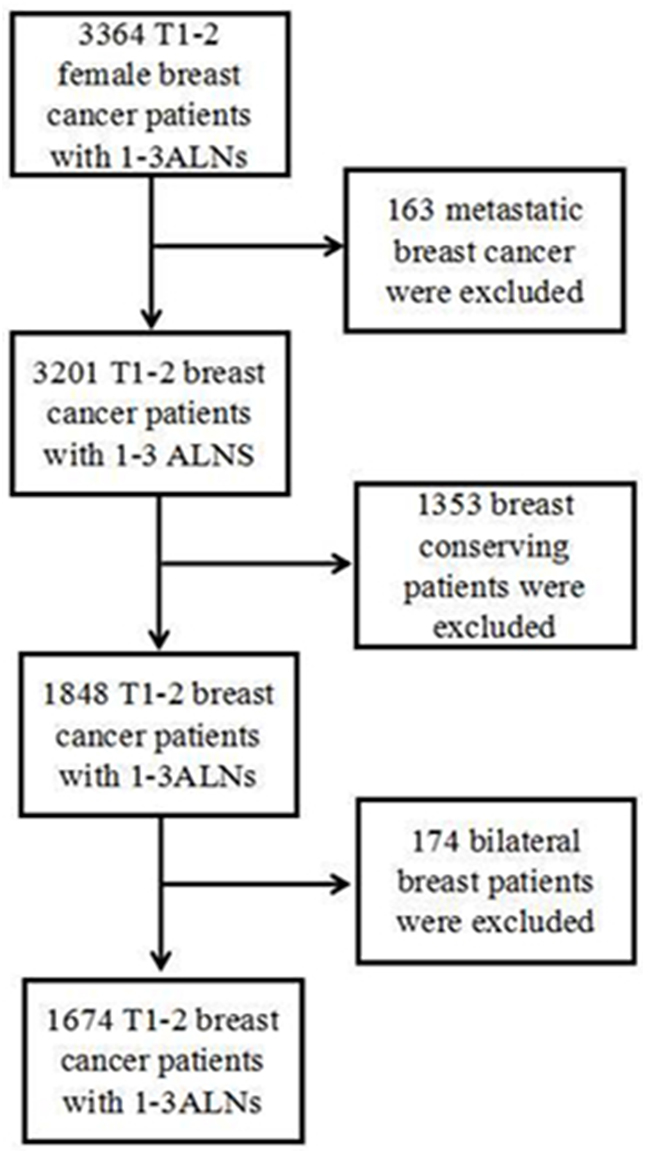 Figure 5: Patients included in the study.

All medical records of patients were retrospectively analyzed and evaluated in terms of general characteristics for LRR, DFS and OS. During the follow-up, OS was calculated from the diagnosis date to the last clinical visit or the date of death. LRR was defined as any reappearance of cancer at the ipsilateral chest wall, axilla, internal mammary, supraclavicular or infraclavicular area. Recurrences in other sites were considered as distant metastasis.

ER, PR, HER2, Ki67, and p53 were performed by immunohistochemistry (IHC). HER2-positivity in breast cancer is defined as IHC3+ or a IHC2+ with FISH-positive. Molecular subtypes are divided into Luminal A, Luminal B, HER2-enriched, and Triple-negative subtypes.

All patients received mastectomy and ALN dissection. The median number of ALNs detected was 17 (4 ~ 51). 1590 (94.9%) patients accepted the chemotherapy, 82 cases(5.1%) for a variety of reasons did not choose to accept systemic chemotherapy. 2 cases is unknown. 149 cases underwent PMRT (8.9%), 1525 (91.1%) did not. The chemotherapy was administered with cyclophosphamide, methotrexate, 5-fluorouracil, cyclophosphamide, doxorubicin or epirubicin. The median cycle of chemotherapy was six (range l ~ 9). Endocrine therapy was delivered to 1100 Luminal A patients and 122 Luminal B patients with the median medication time at 55 months (range 26-78 months), mainly by antiestrogens and aromatase inhibitors. Premenopausal patients were treated with tamoxifen, and postmenopausal women were treated with tamoxifen or an aromatase inhibitor.

In radiation, 4 or 8 MV photon beams were used. The bolus was not used in these patients. The radiation dose was 50Gy (range: 50- 60Gy) at 1.8 to 2Gy per fraction (25-26 fractions). Radiation targets covered the ipsilateral chest wall and the supraclavicular area of all the patients. The axilla area was covered in 9 patients and internal mammary nodes covered in 14 patients. Six patients of HER2-rich received trastuzum. Two of six patients received PMRT. Four of six patients did not receive PMRT.

All the patients received follow-up every 3 or 6 months by medical review, phone call, or letter. The follow up defined as from the first day after operation. The main aim of our study was the LRR, DFS, and OS. Loco-regional recurrence (LRR) was defined as recurrence of tumor at the ipsilateral chest wall, axilla, internal mammary, supraclavicular or infraclavicular area. The diagnosed of LRR was confirmed by histology.

We would like to thank Professor Jin Xiaoming and Dr. Tong Dandan of Harbin Medical University for providing pathologic evaluation of the stained tissue sections.

The authors declared that there is no conflict of interest in this work.