The toll-like receptor (TLR) family, the most important pattern recognition receptor family, plays a central role in sensing invading pathogens and tissue damage as danger signals, which leads to the massive release of inflammatory mediators such as pro-inflammatory cytokines, reactive oxygen species, antimicrobial peptides and acute-phase proteins into the bloodstream [9, 10]. TLRs are ubiquitously expressed on various cells, such as macrophages, dendritic cells, B cells, T cells, fibroblasts and epithelial cells. Previous reports [11–13] have suggested that TLRs contribute to the inflammatory processes after SCT, where subsequent translocation of bacterial components as well as release of endogenous danger molecules stimulate TLRs to trigger cytokine storm, leading to organ damage, which may vitiate the beneficial anti-microbial effect of TLRs.

Several TLR genes have been investigated in terms of the impact of their variation on outcome and susceptibility to infection and cancer. Among them, 3 functional variations [14–16] in the TLR1 (rs5743551, -7202A>G), TLR2 (rs7656411, 22215G>T) and TLR4 (rs11536889, +3725G>C) genes with high (>0.2) minor allele frequencies in the Asian population were retrospectively investigated to determine their associations with transplant outcomes in a cohort of patients who underwent unrelated HLA-matched bone marrow transplantation (BMT) for hematologic malignancies through the Japan Marrow Donor Program (JMDP).

Table 1: Recipient and donor characteristics in the discovery and validation cohorts

Transplant outcomes according to TLR genotypes

Table 2: The results of a univariate analysis regarding the association between TLR1 variations and clinical outcomes after transplantation in the discovery cohort

Table 3: The results of a univariate analysis regarding the association between TLR2 variations and clinical outcomes after transplantation in the discovery cohort

Table 4: The results of a univariate analysis regarding the association between TLR4 variations and clinical outcomes after transplantation in the discovery cohort

Table 5: The results of a multivariate analysis regarding the association between TLR1, TLR2 and TLR4 variations and clinical outcomes after transplantation in the discovery cohort 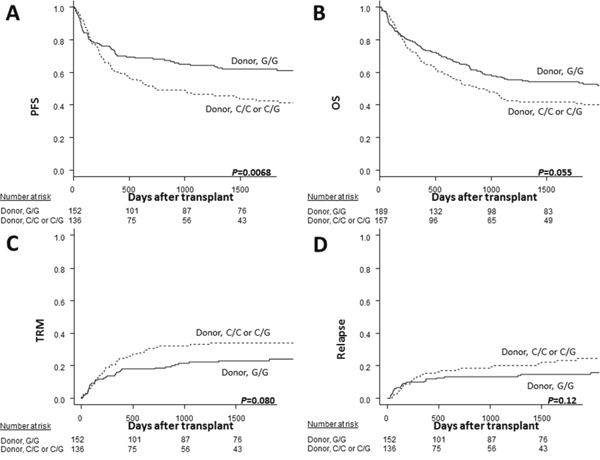 When the main causes of TRM were analyzed according to the TLR4 +3725G>C genotype, the donor TLR4 +3725G/G genotype was associated with a significantly lower incidence of fatal infections than other genotypes (P=0.047; Figure 2). The donor TLR4 +3725G/G genotype resulted in one fifth of the cumulative incidence of fatal infection (0.7% vs. 4.6%; P=0.11; Figure 3), although there were no statistical differences. 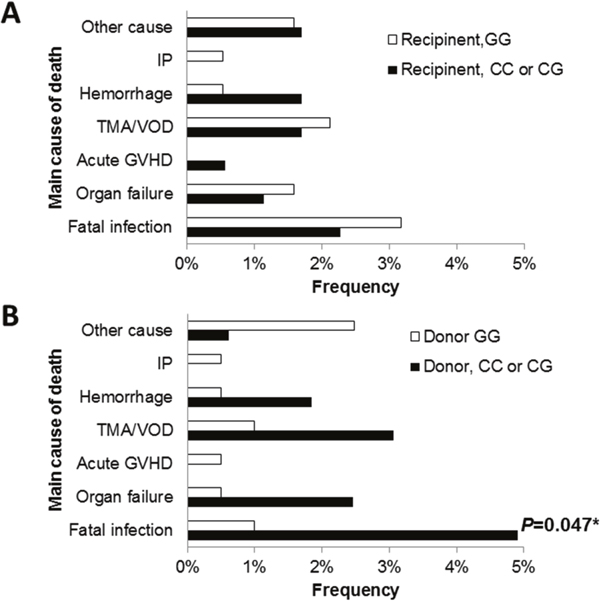 Figure 2: The main causes of death after transplantation according to the recipient (A) and donor TLR4 genotype (B) in the discovery cohort. The asterisk denotes P <0.05. 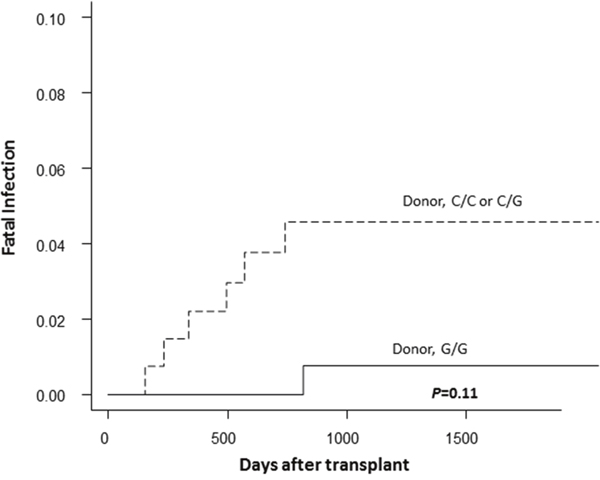 Table 6: The results of a univariate analysis regarding the association between TLR4 variations and clinical outcomes after transplantation in the validation cohort

Table 7: The results of a multivariate analysis regarding the association between TLR4 variations and the clinical outcomes after transplantation in the validation cohort 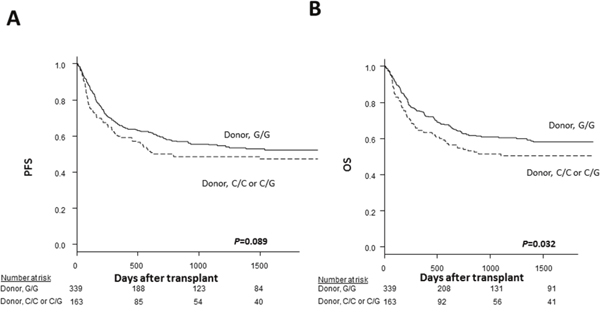 The mechanisms through which the donor TLR4 +3725G/G genotype exerts its beneficial effects remain to be determined. A recent report [16] demonstrated that the TLR4 +3725G>C variation located in its 3’-untranslated region was functional, and monocytes from TLR4 +3725G/G subjects expressed lower levels of TLR4 on their surfaces and were less responsive to lipopolysaccharide (LPS), a TLR4 ligand, than those from C/G or C/C subjects, possibly due to the preference of microRNAs for binding to the +3725G allele over the +3725C allele. The lower translational activity associated with the TLR4 +3725G/G genotype may contribute to prevent infection-associated death following SCT.

Evidence of TLR4 activation having a negative influence on outcomes following severe infection has been demonstrated in previous studies using mouse models [17–19], showing that blockade of TLR4 inhibited systemic inflammatory responses in sepsis, which reduced the disease severity and lethality. Although one may deduce from these findings that the putatively hypoactive TLR4 +3725G/G genotype increases susceptibility to infectious diseases, the TLR +3725G/G genotype was associated with a lower risk of developing sepsis in China [20], suggesting this to be unlikely. This hypothesis may also be supported by the association of the TLR +3725G/G genotype with a lower rate of Gram-negative infection in sepsis in Germany [21], and with a lower susceptibility to severe gastric atrophy related to Helicobacter pylori infection [22, 23], hepatitis B recurrence after liver transplantation [24] and advanced periodontitis [25, 26] in the Asian populations. Of note, the TLR +3725G/G genotype was beneficially associated with a lower risk of prostate cancer in Sweden [27] and a lower risk of developing chemotherapy-induced neutropenia in children with ALL in Netherland [28], although their etiological relevance to the current findings are unclear. In the present study, the TLR +3725G>C variation did not significantly influence engraftment and relapse rates after SCT.

Bochud, et al.[29] reported that donor TLR4 haplotype S4 among haplotypes S1 to S4 was associated with a risk of invasive aspergillosis after allogeneic hematopoietic stem cell transplantation. However, because haplotype S4 is absent in Asian populations [30, 31], which is defined by the TLR4 variations rs4986790 [D299G] and rs4986791 [T399I], but not by TLR4 variation rs11536889 that was investigated in the present study, we decided not to investigate the potential link between each haplotype and the transplant outcomes.

One major limitation associated with the present study is that the detailed information on the infections, including the types, severity, treatments, and therapeutic appropriateness, was beyond the scope of the current study and the only the information on the causes of death (such as fatal infections) was available.

In conclusion, the findings of the present data suggested that the donor TLR4 +3725G>C variations predicted better survival outcomes after SCT than other genotypes. Therefore, TLR4 +3725G>C genotyping in donors may be a valuable tool for selecting donors and evaluating pretransplantation risks that, combined with other currently known risk factors, can form the basis for carrying out suitable tailoring of transplantation strategies. Considering the plausible functional roles of these variations, they may be candidates for future prophylactic and therapeutic strategies for complications after allogeneic SCT. Further studies are warranted to ascertain whether or not the findings of this study can be extended to other stem cell sources or to HLA-mismatched transplantation and to validate the present findings in other ethnic groups.

The patients underwent BMT through the JMDP with T cell-replete marrow between May 1993 and November 2005 (Table 1). No patients had a history of any prior transplantation. The final clinical data analyses of these patients were completed by November 25, 2009. The conditioning regimen varied according to the underlying disease and the condition of the patient. The combination of cyclophosphamide (CY) combined with total body irradiation (TBI) was mainly used for the myeloablative conditioning (MAC) regimen, whereas the combination of fludarabine and melphalan or busulfan was mainly used for the reduced-intensity conditioning (RIC) regimen [32]. Cyclosporine or tacrolimus with short-term methotrexate was used for GVHD prophylaxis [33, 34]. No patients received anti-T cell therapy, such as antithymocyte globulin or ex vivo T cell depletion, in this study. All patients and donors gave their informed consent at the time of transplantation to take part in molecular studies of this nature, in accordance with the Declaration of Helsinki. This project was approved by the Institutional Review Board of Aichi Medical University School of Medicine and the JMDP. All methods were performed in accordance with the approved guidelines and regulations.

HLA 12/12-allele-matched transplants were incorporated into the discovery cohort to eliminate the impact of HLA-allele mismatch on transplant outcomes, and all 365 available pairs were analyzed in the discovery cohort study. In conducting the validation study, in order to minimize the influence of HLA on the transplant outcomes, all 502 transplants from HLA-DPB1-mismatched donors were incorporated into the validation cohort.

Data were collected by the JMDP using a standardized report form. Follow-up reports were submitted at 100 days, 1 year and then annually after transplantation. Only recipients were routinely measured for the pretransplantation cytomegalovirus (CMV) serostatus. The time to neutrophil engraftment was defined as the first of 3 consecutive days with an absolute neutrophil count of more than 0.5×109/L. Acute GVHD developing within the first 100 days posttransplantation was diagnosed and graded based on the established criteria [36]. A classification of chronic GVHD observed in patients who survived beyond day 100 was based on the Seattle criteria [37]. The overall survival (OS) was calculated from the date of transplantation to the date of death from any cause. Disease relapse was defined as the number of days from transplantation to disease relapse or progression. The transplant-related mortality (TRM) was defined as death due to any cause other than relapse or disease progression. The PFS was defined as survival without disease relapse or progression. Any patients who were alive at the last follow-up date were censored. Data regarding the clinical and microbiological characteristics of infections, postmortem changes, prophylaxis against infections and therapy for GVHD given on an institutional basis were not considered in this study.

All of the statistical analyses were carried out using the EZR software package [38]. The probabilities of OS and PFS were calculated using the Kaplan-Meier method, and comparisons between groups were performed via the log-rank test. The occurrence of TRM, disease relapse, acute GVHD and chronic GVHD were compared using the Gray test [39] and analyzed using the cumulative incidence analysis [40], considering relapse, death without disease relapse, death without acute GVHD, death without chronic GVHD and death without engraftment as respective competing risks. The cumulative incidence of fatal infection was analyzed using the Gray test, while considering fatal infections without disease relapse and relapse or death without fatal infection as competing risks. A multivariate Cox model was constructed for the OS and PFS, and a Fine-Gray competing risk regression model was constructed for TRM, relapse, grades 2-4 acute GVHD, grades 3-4 acute GVHD and chronic GVHD using stepwise selection at a significance level of 5% to evaluate the hazard ratio (HR) associated with the TLR1, TLR2 and TLR4 genotypes. Recipient age at the time of BMT, sex, pretransplantation CMV serostatus, disease characteristics (i.e. disease type, disease lineage and disease risk at transplantation), donor characteristics (i.e. age, sex compatibility and ABO compatibility), transplant characteristics (i.e. MAC or RIC and total number of nucleated cells harvested per recipient weight) and year of transplantation were used as covariates. Although these covariates were all available for the discovery study, some of these covariates were not available for the validation study (Table 1). The median was used as the cut-off point for continuous variables. The chi-squared and Mann-Whitney tests were used to compare the results of two groups. The linkage disequilibrium (LD) structure among the single nucleotide polymorphisms in the TLR1, TLR2 and TLR4 gene was determined using HAPLOVIEW, version 4.2 [41, 42]. For all analyses, P<0.05 was considered statistically significant.

This study was supported by grants from the Ministry of Education, Culture, Sports and Technology of Japan (15K09513), the Ministry of Health, Labour and Welfare of Japan (15eK0510002h0002, 15ek0109134h0001, and 16mk0101065h0001), the SENSHIN Medical Research Foundation (Osaka, Japan), the Aichi Cancer Research Foundation (Nagoya, Japan) and the 24th General Assembly of the Japanese Association of Medical Sciences (Nagoya, Japan). The funders played no role in the study design, data collection and analysis, the decision to publish or the preparation of the manuscript.