Conclusions: Our analysis illustrates how next-generation sequencing of cancer cell subpopulations may be utilized to enrich for cancer cell markers and enhance detection of bladder cancer micrometastases to improve pathologic staging and provide insight into cancer cell biology.

Latent recurrences despite favorable pathology has been a longstanding conundrum in surgical oncology. In patients with muscle-invasive urothelial carcinoma of the bladder, radical cystectomy and pelvic lymph node dissection provides local surgical control. Despite complete resection based on traditional gross and histological staging, patients with clinically localized muscle-invasive urothelial bladder carcinoma (pT2 N0) have a recurrence rate of 11-35% following radical cystectomy, with recurrence rates in higher stages of localized disease up to 50-69% (pT4 N0) [1]. Recent advances in immunotherapy combined with systemic cisplatin-based chemotherapy have provided additional options for adjuvant therapy [2, 3]. As bladder cancer progresses based on a predictable pattern of lymphatogenous metastasis with recurrence attributed to lymph node micrometastases, improved pathologic staging of lymph nodes may add precision to selecting adjuvant therapy as well as stratifying patients with metastatic disease [4].

Cancer stem cells (CSC) have been implicated as a source of early metastasis and disease progression [5]. They represent a self-renewing and pluripotent population that can reconstitute all cell types of an individual tumor. Enrichment of stem-like genes has been observed in single cell analysis of early, low-volume metastases in an in vivo mouse model for breast cancer as well as in highly aggressive small cell neuroendocrine prostate cancer [6, 7]. In bladder cancer, the surface markers CD44 and CD49f have been implicated in the cancer-initiating population important in cancer self-renewal and repopulation [8–10]. Therefore, we postulated that bladder cancer CD44+CD49f+ cells may be a critical component of metastasis, and hypothesized that characterization of these cancer cell subpopulations from multiple tumor regions and lymph nodes will identify micrometastases as well as molecular profiles that may elude to metastatic potential. Here, we prospectively purified and characterized total and EPCAM+CD44+CD49f+ subpopulations in fresh, surgically-resected tissue from multiple regions of a bladder tumor and regional lymph nodes by whole-exome sequencing and RNA-sequencing in a single patient with clinically localized muscle-invasive urothelial bladder carcinoma.

The patient is a 59-year-old male with clinically localized muscle-invasive urothelial bladder carcinoma who underwent radical cystoprostatectomy and bilateral lymph node dissection. Neoadjuvant chemotherapy was not administered due to renal insufficiency and significant gross hematuria. Fresh, surgically-resected tissue was obtained from four distinct bladder tumor regions and two representative lymph nodes from the right and left iliac fossae, and the tissue was dissociated into single cells for fluorescence activated cell sorting (Figure 1A). Final pathologic diagnosis was pT4 N0 with prostate stroma invasion and 43 negative lymph nodes, blindly reviewed by two independent genitourinary pathologists (J.S. and A.S.) with sample histology depicted (Figure 1B). Fluorescence activated cell sorting (Supplementary Figure 1A) was performed to isolate and quantify EPCAM+CD44+CD49f+ cells, with EPCAM staining incorporated to distinguish against non-epithelial cells [9, 11]. While sorted cell populations ranged from 0.04% to 0.27% as expected in the four primary tumor regions, we detected a smaller proportion of EPCAM+CD44+CD49f+ cells in the lymph nodes ranging from 0.002% to 0.004% (Supplementary Figure 1B). 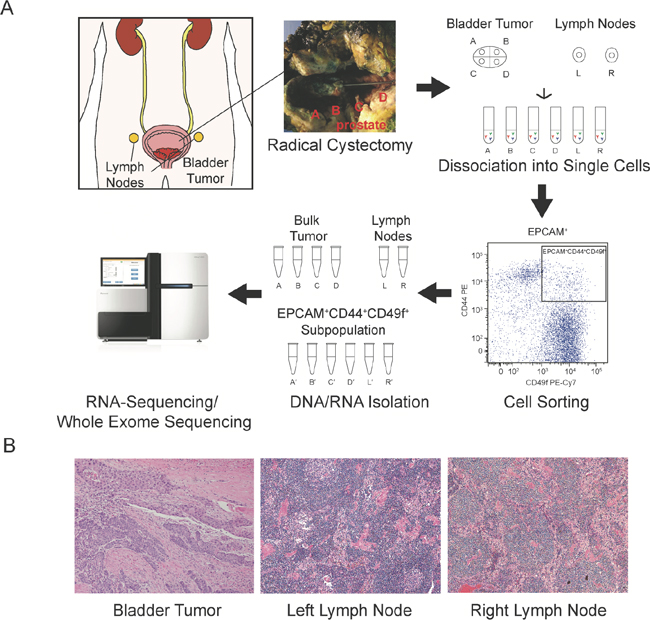 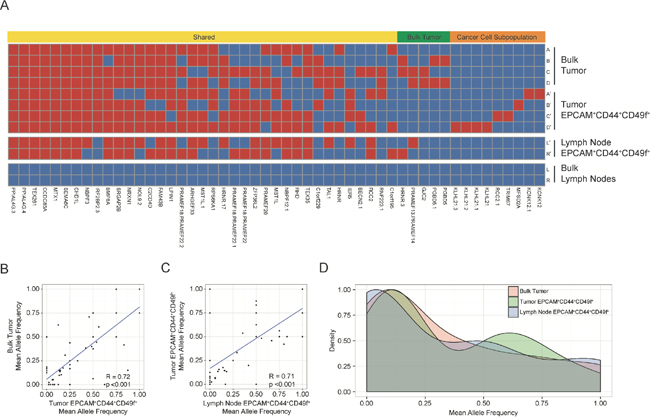 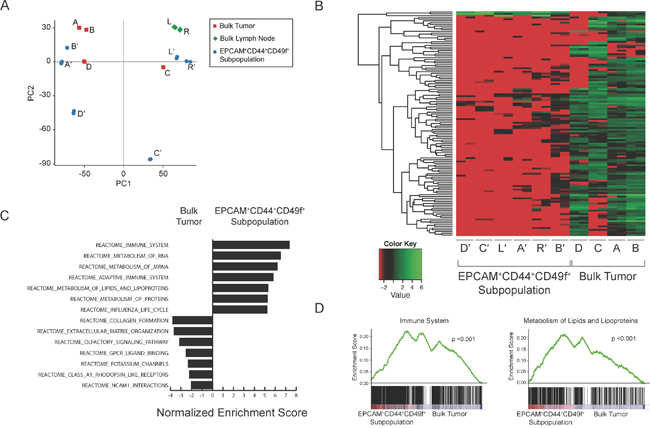 In this report we utilized a next-generation sequencing-based approach to both detect and quantify EPCAM+CD44+CD49f+ cells in surgically resected lymph nodes with a somatic variant profile similar to the primary tumor and tumor EPCAM+CD44+CD49f+ cells, providing evidence for the presence of micrometastatic disease despite negative traditional histologic staging. Using whole-exome sequencing we were unable to detect tumor variants in the bulk lymph nodes, however a key enrichment step for the EPCAM+CD44+CD49f+ subpopulation through fluorescence activated cell sorting provided the sensitivity needed to identify the presence of micrometastases in the lymph nodes. In the future, perhaps sorting for the more abundant EPCAM+ population may improve sensitivity for cancer detection. While previous studies in other cancers have identified micrometastases using RT-PCR, direct Sanger sequencing of specific genes, or histology, our study is the first, to our knowledge, in which whole-exome sequencing has been utilized to prospectively detect and quantify micrometastases in cancer [4, 12–14]. Furthermore, while intratumoral heterogeneity has previously been studied in urothelial bladder cancer on a chromosomal level, our analysis is the first to examine this using next-generation sequencing [15].

Enrichment for gene sets related to lipid metabolism and the immune system in the EPCAM+CD44+CD49f+ cells compared to the bulk tumor population, which included tumor-infiltrating and stromal cells, may represent pathways unique to EPCAM+CD44+CD49f+ cells. Lipid metabolism may play a central role in cancer, as in vitro inhibition of these pathways has been shown to influence cellular transformation, growth, and invasion [16]. Recently, targeting fatty acid oxidation has shown decreased tumor growth in an in vivo model of MYC-driven triple negative breast cancer [17]. Inflammatory pathways have shown both anti-tumor as well as a tumor promoting roles with evidence suggesting that inflammation may function to maintain cancer initiating cell populations [18]. Prostaglandin E-2 has been shown to promote bladder CSC re-population in tumors after treatment with chemotherapy, and targeting this pathway with a cyclooxygenase-2 inhibitor attenuated chemotherapy resistance [19]. In addition, we identified a subset of genes important in the immune response and immune cell activation enriched only in the lymph node EPCAM+CD44+CD49f+ cell populations. These metabolic and immune pathways may provide clues to the treatment resistance and pluripotency of cancer initiating cells, as well as the mechanisms of tumor metastasis or differences in cell niche that will need to be exploited in future studies. A cautionary note is that the immune signature could be influenced by contaminating immune cells from lymph nodes.

Identification of otherwise undetected micrometastases may have important clinical implications in prognosis, sequence of therapy, and targeting cancer pathways. Although our patient ultimately was diagnosed with T4 N0 disease, the ability to improve staging through detection of lymph node micrometastases may allow us to predict recurrence risk and select patients for adjuvant therapies in patients of all T stages with clinically localized (N0) disease. Indeed, this patient recurred 12 months after surgery. While detection of specific driver mutations may be more time and cost effective, the heterogeneity of bladder cancer has been broadly demonstrated and there is compelling need to identify novel mutations that may be instrumental to development of micrometastasis and warrants our unbiased approach. Next-generation sequencing technologies are becoming increasingly logistically and financially accessible with our process from tissue procurement to analyzed data accomplishable in approximately 3 weeks. Major limitations to our study include the report of a single patient and the lack of functional evidence as our archival tissue experienced low viability when thawed with the inability of even total tumor cells to generate xenografts. However, multiple studies have demonstrated how a genome sequencing based case report can still provide valuable information that can guide further clinical study [20, 21]. In the future, we will need to prospectively analyze a larger cohort of patients with a broad spectrum of clinical disease to test this approach before we can generalize our findings.

Written informed consent was obtained from the patient in this study through an Institutional Review Board approved protocol #11-001363 prior to inclusion in this study.

Fresh tissue from four distinct bladder tumor regions and two representative lymph nodes in the left and right iliac fossae were obtained from a single patient. Prior to bladder resection, the lymph nodes were dissected and sequestered from the primary tumor to prevent contamination. A cross section of the lymph nodes was utilized for our analysis while the remainder was returned for pathology. Tissue was dissociated into single cell suspensions and stained with antibodies for EPCAM (BD 347197), CD44 (BD 55479), and CD49f (BioLegend 313621) for fluorescence activated cell sorting (BD FACSAria) of cancer cell subpopulations [9]. DNA and RNA were isolated using a Qiagen All Prep DNA and RNA isolation kit. Bladder and lymph nodes underwent standard pathologic assessment including gross and histologic examination. Lymph nodes were trimmed of fat and embedded entirely. A single representative 4 to 6 μM section for each of 43 lymph nodes were obtained for hematoxylin and eosin staining.

A principal component analysis (PCA) was performed on normalized read counts of all samples using the 'prcomp' function in R. In this analysis, we selected 500 top ranked genes based on their variations across all samples using the function ‘rowVars’ in R matrixStats package. The histogram plot was generated using ggplot2 package and p-values corresponding to allele frequencies were derived from Welch's unequal variances t-test. The Kolmogorov-Smirnov statistic was utilized to obtain GSEA statistics as previously described [22].