Pancreatic neuroendocrine carcinoma (PNEC) is often misdiagnosed as pancreatic ductal adenocarcinoma (PDAC). This retrospective study differentiated PNEC from PDAC using magnetic resonance imaging (MRI), including contrast-enhanced (CE) and diffusion-weighted imaging (DWI). Clinical data and MRI findings, including the T1/T2 signal, tumor boundary, size, enhancement degree, and apparent diffusion coefficient (ADC), were compared between 37 PDACs and 13 PNECs. Boundaries were more poorly defined in PDAC than PNEC (97.3% vs. 61.5%, p<0.01). Hyper-/isointensity was more common in PNEC than PDAC at the arterial (38.5% vs. 0.0), portal (46.2% vs. 2.7%) and delayed phases (46.2% vs. 5.4%) (all p<0.01). Lymph node metastasis (97.3% vs. 61.5%, p<0.01) and local invasion/distant metastasis (86.5% vs. 46.2%, p<0.01) were more common in PDAC than PNEC. Enhancement degree via CE-MRI was higher in PNEC than PDAC at the arterial and portal phases (p<0.01). PNEC ADC values were lower than those of normal pancreatic parenchyma (p<0.01) and PDAC (p<0.01). Arterial and portal phase signal intensity ratios and ADC values showed the largest areas under the receiver operating characteristic curve and good sensitivities (92.1%–97.2%) and specificities (76.9%–92.3%) for differentiating PNEC from PDAC. Thus the enhancement degree at the arterial and portal phases and the ADC values may be useful for differentiating PNEC from PDAC using MRI.

Pancreatic ductal adenocarcinoma (PDAC) is the most common malignant tumor of the pancreas. It is highly aggressive and rapidly fatal, with a five-year survival rate <5% [1]. While resection can be curative, resection rates remain low at 10–15% [2] due to local invasion or distant metastases. The PDAC characteristic vascularization pattern can be visualized using computed tomography (CT) or magnetic resonance imaging (MRI) [3, 4], and PDACs are often hypovascularized as compared to adjacent normal tissue [5].

PDAC and PNEC treatment strategies and prognoses differ. For PNEC, surgery is indicated if curative resection is possible, even in those cases with limited metastases, for example to liver [19, 20]. In addition, targeted therapy with sunitinib or everolimus [21] and somatostatin analogues (octrecotide) [22], or radionuclide-labeled somatostatin (DOTATATE) [23] may be valuable for PNEC, along with cytotoxic chemotherapy (e.g., cisplatin with etoposide). PNEC are generally less aggressive and have better outcomes than PDAC. The PNEC five-year survival rate is approximately 27.7% [24], which is higher than that of PDAC (<5%). Pretreatment differentiation of PNEC from PDAC is important in determining therapeutic strategies. To the best of our knowledge, no study has explored differences in imaging features between PDAC and PNEC. MRI, particularly in diffusion-weight imaging (DWI), has been used to differentiate pancreatitis and pancreatic cancer [25–28], and MRI has a similar or better performance in PDAC evaluation [29, 30]. The present study assessed the value of MRI, including DWI and dynamic contrast-enhanced imaging, for differentiating PNEC and PDAC.

Thirty-seven PDAC and 13 PNEC patients were analyzed (Figure 1, Table 1) in this retrospective study. Thirty-one PDAC patients underwent surgery and six underwent biopsy. Twelve PNEC patients underwent surgery and one underwent biopsy. We compared demographic data and clinical symptoms between PDAC and PNEC patients. No differences were found for age, gender, or clinical symptoms between those two groups. However, yellow urine or icterus was more common in PDAC compared with PNEC patients (27.0% vs. 7.7%, p>0.05). PNEC tended to occur in men compared with PDAC (76.9% vs. 62.2%, p>0.05). Carbohydrate antigen 19-9 (CA19-9) and CA125 levels were higher in PDAC than in PENC patients. Abnormal CA19-9 level was more common in PDAC than PNEC (81.8% vs 30.8%, p<0.05). In our series, 89.2% of PDAC patients were correctly diagnosed via MRI, while eight (61.5%) PNEC patients were misdiagnosed as PDAC via MRI. 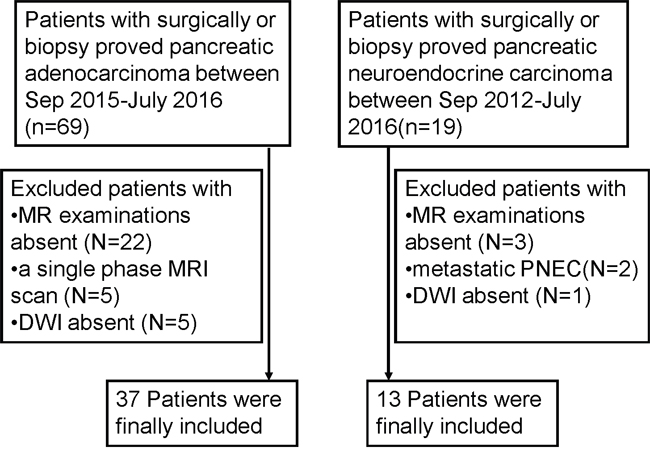 * Data are shown as median.

Table 2: The summary of MRI findings

* compared with hyper- and isointensity 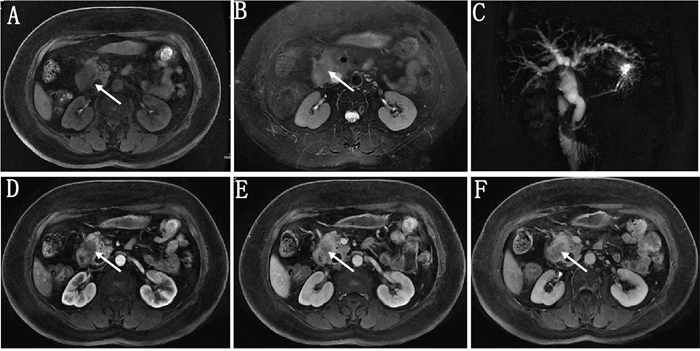 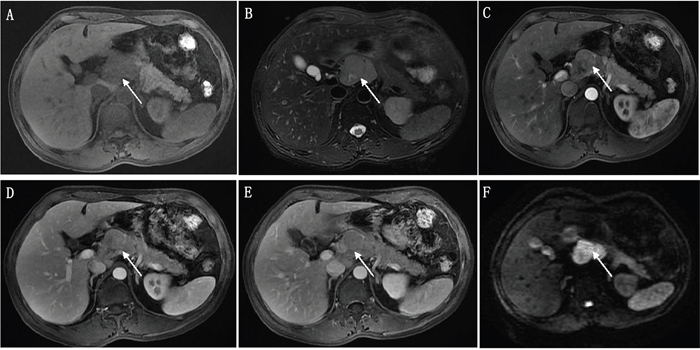 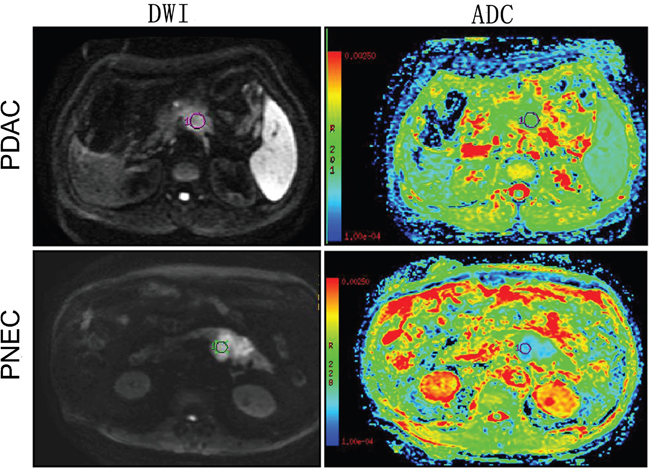 Figure 6: Apparent diffusion coefficients (ADC) values in pancreatic ductal adenocarcinoma (PDAC) and pancreatic neuroendocrine carcinoma (PNEC) measured by two readers. The ADC values of PDAC and PNEC were both lower than the normal parenchyma. In addition, the ADC value of PNEC was also lower than PDAC. The bias between the two readers was -0.3%(-10.7%, 10%) for ADC value.

The data from two readers were pooled together. 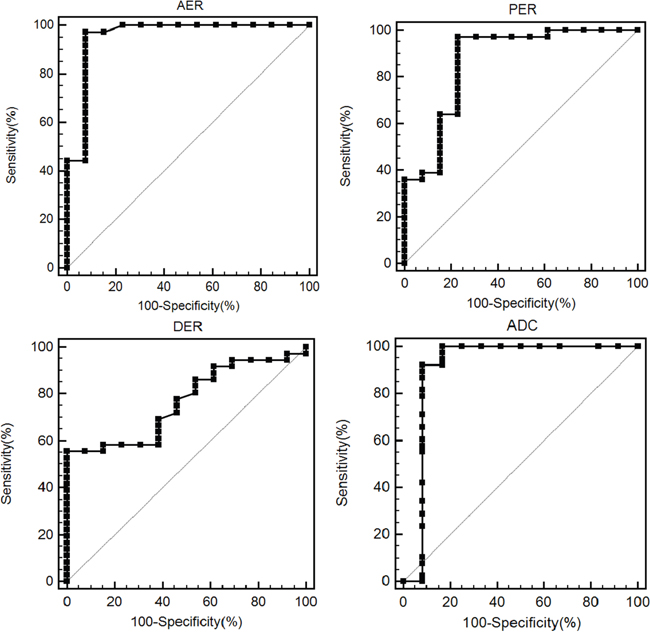 Figure 7: ROC curve of the signal intensity ratio at arterial (AER), portal (PER) and delayed phases (DER), and mean apparent diffusion coefficients (ADC) value for differentiating neuroendocrine carcinoma (PNEC) from pancreatic ductal adenocarcinoma (PDAC). The data from two readers were pooled together. The area under the curve is 0.954, 0.865, 0.769 and 0.910, respectively.

PNEC can mimic PDAC in CT or MR images due in part to a characteristic hypoenhanced pattern [8, 18]. It is valuable to accurately diagnose patient tumor type (PNEC vs. PDAC) before surgery, because treatment strategies and prognoses differ between the two types. The present study compared PNEC MR imaging features with those of PDAC. We found that ill-defined tumor boundaries, hypointensity in contrast-enhanced images, lymph node metastases, and local invasion/distant metastases were more common in PDAC than PNEC. Quantitative data further indicated that signal intensity ratios at arterial and portal phases, and ADC values have potential for differentiating those two tumors.

PDAC is a fast-progressing malignancy with surrounding tissue invasion and metastases to distant organs. Tumors usually exhibit ill-defined margins [13]. Lymph nodes metastases and local invasion or distant metastases are also common in PDAC [31]. In our series, 97% of PDAC cases had ill-defined margins and 97% exhibited lymph node metastases, which was consistent with previous studies. PNECs also frequently exhibited ill-defined boundaries (61%), and often metastasized to lymph nodes (61%) or invaded the surrounding tissues. However, these features were still more common in PDAC than PNEC. To some degree, these qualitative features may be useful for differentiating PNEC from PDAC.

DWI has also been widely used to differentiate benign and malignant pancreatic lesions [27, 33], and may be applicable for grading PNENs [12, 34] and differentiating PNENs and PDAC [35, 36]. Lee, et al. and Wang, et al. found no differences in ADC values between PNENs and PDAC [35, 36]. However, G1 and G2 PNETs, which may have higher ADC values than PNECs [12, 35], were included in these studies. Therefore, we speculate that it is important to consider PNEN grade when evaluating ADC values. As PNECs frequently exhibited high mitotic ability (>20 mitoses per 10 high powered fields (HPFs)) and proliferation (Ki-67 index >20%) in our study, PNECs should therefore exhibit high tissue cellularity and restricted water mobility. Our data supported this speculation. PNEC ADC values were lower than those of PDAC. Moreover, ADC showed very good sensitivity and specificity in differentiating PNEC from PDAC.

Our study had several limitations. First, retrospective studies may exhibit selection and verification bias. Some PNEC patients were excluded due to lack of MRI examinations, and the PNEC study population could not reflect the entire PNEC spectrum. Second, only CE-MR and routine DWI were studied, and some novel approaches, such as intravoxel incoherent motion (IVIM) DWI and texture analysis, would provide more information [37, 38]. Finally, larger number of b values would be more sensible rather to use only two b values [37].

In conclusion, we compared PDAC and PNEC MR imaging features, and found that ill-defined margins, lymph node metastases, and local invasion are more common in PDAC. In addition, PNEC enhancement degree at arterial and portal phases are higher than those of PNEC. PNEC usually exhibits lower ADC values than PDAC. Enhancement degree at arterial and portal phases and ADC value may be useful for differentiating PNEC from PDAC.

This study included patients treated for PDAC and PNEC at our institution between September 2015 and July 2016, and September 2012 and July 2016, respectively. A total of 69 patients with surgically or biopsy diagnosed PDAC were identified. Twenty-two patients were excluded due to lack of MRI examination. Ten patients were excluded because of only a single-phase scan (n=5) or lack of DWI (n=5). We identified 19 patients with surgically or biopsy diagnosed PNEC. Six were excluded due to metastatic NEC (n=2), or lack of MRI examination (n=3) or DWI (n=1). In total, 37 PDAC and 13 PNEC patients were included in this study (Figure 1). The pathological diagnosis of PNEC was based on the WHO 2010 classification for NENs: NEC G3, >20 mitoses per 10 HPF, Ki-67 index >20%. In addition, demographic and clinical data were retrieved from medical records. This retrospective study was approved by our institutional review board with waiver of patient formal consent.

Tumor tissue specimens were fixed with 10% formalin, embedded in paraffin, and sliced for hematoxylin-eosin (H&E) staining. PDAC was typically characterized by moderately to poorly differentiated glandular structures. PNEC was diagnosed based on the 2010 WHO classification for neuroendocrine neoplasms by counting the number of mitoses per 10 HPFs and assessing Ki-67 proliferation index (percentage of positive cells in areas of highest nuclear labeling). NEC G3 was regarded as >20 mitoses per 10 HPF, Ki-67 index >20%.

Data were analyzed using SPSS 16.0 (SPSS Inc, Chicago, IL). Quantitative data were presented as means (standard deviation) or median, and were analyzed via independent samples t test, Mann-Whitney U test, or one-way analysis of variance (ANOVA). Categorical variables were represented as the number of cases (percentage) and were analyzed using Chi-square or Fisher’s exact tests when necessary. The data from the two readers were pooled together for diagnostic performance analysis. The diagnostic values, sensitivities, and specificities of ADC and signal intensity ratio for differentiating PDAC from PENC were assessed by the receiver operating characteristic (ROC) curve, and inter-readers agreement were determined by Bland-Altman plot using Medcalc software (Mariakerke, Belgium). P<0.05 was considered statistically significant.

This study was funded by Zhejiang Medical Science and Technology Project (2017KY331).